THE range-topping Kia Stinger packs 272kW of twin-turbo power, a limited-slip diff and adaptive dampers, but also plenty of headroom for additional grunt in aftermarket land. 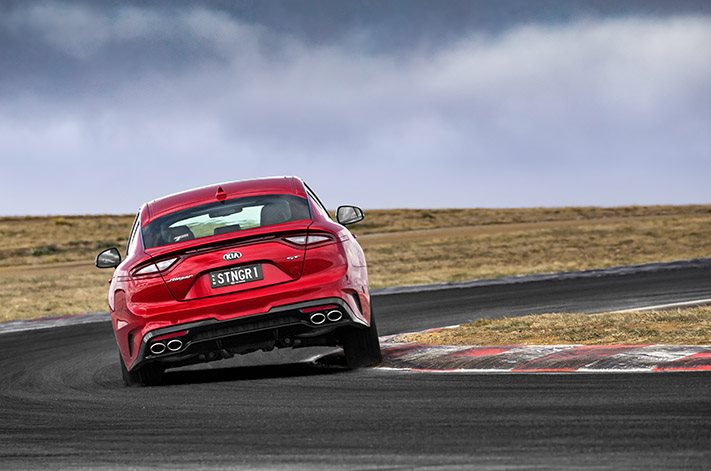 Yes, Wheels has already had a deep dive on the Stinger that you can read about here, but that was with pre-production cars that lacked proper build quality, and in the case of the V6 GT, production Brembo brakes. This is our first chance to see how the showroom version of the Stinger hangs on – both at the racetrack and on the road.

The Kia Stinger GT is an impressive, fun package. But it’s still a little rough around the edges, and no doubt a series of running improvements will hone that even further.

THE last corner at Wakefield Park is a real mongrel. Hug the left side of the track, make as late a entry into it as you can as the pit lane wall closes in, and slowly roll on the throttle.

My exit is a little offline as the Kia Stinger GT I’m driving understeers slightly onto the edge of the ripple strip, when suddenly there’s a wag from the rear as it slides into oversteer, the low-slung five-door’s stability control letting the rear of the Stinger run wide slightly offline to make me look like a drifting pro. 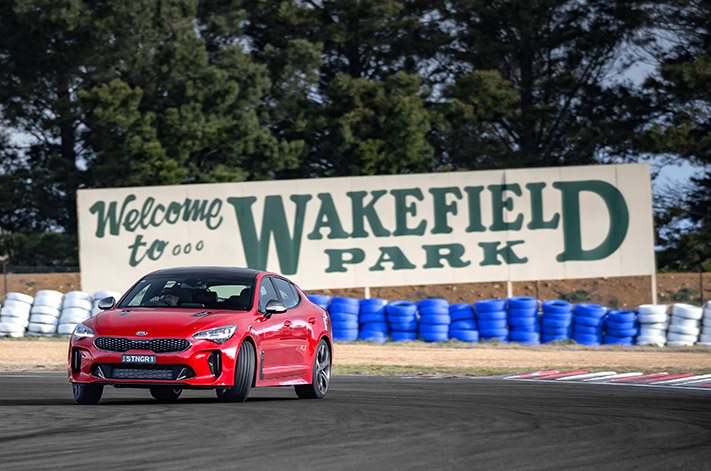 A heartbeat later, the rear is reigned in, the throttle is buried to the firewall, and a lumpy turn one is approaching fast.

That right there is my first exciting experience of what will become, in a few weeks, Kia’s halo car, and the most powerful it has ever produced. Performance honed, with a long 2905mm wheelbase and rear-drive, it turns the Korean car maker’s former mantra of only serving practical, conservative front-drive products right on its head.

Kia wanted to show the performance strength of the Stinger GT, and Wakefield Park certainly did that. Even if a lap before, coming out of the pits and into turn one, the brake pedal feeding the four-pot Brembos wrapped around the 350mm vented front discs, and the 340mm ones down the rear wrapped in two-pot calipers, felt a bit long and spongy after dozens of earlier runs.

As Kia’s hero, the Stinger GT comes well-equipped. A 3.3-litre twin-turbo V6 producing 272kW and 510Nm powers the staggered rear wheels (the fronts are wrapped in 19-inch 255/40 profile Continentals and the rears 255/35s) via an eight-speed automatic gearbox featuring a special balancer in its torque converter to smooth out any rough edges. 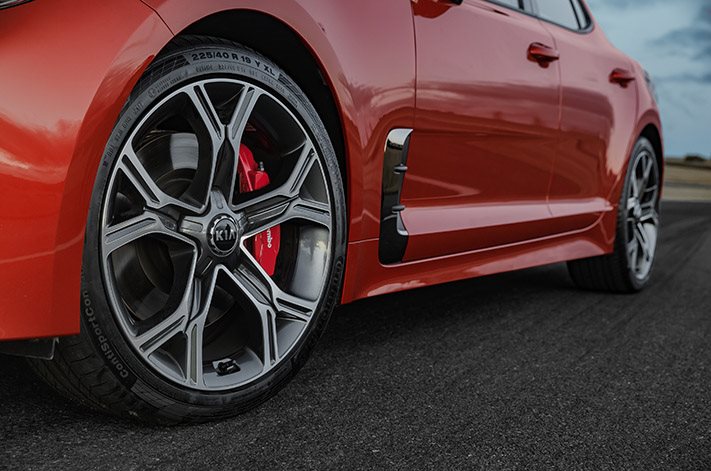 Fifteen-speaker Harman Kardon audio system, anyone? Open the driver’s door, and there it is. Electric liftback? Here it is. Head-up display and headlights that shine around corners? They're right there.

But the big two in the GT’s bag of tricks are an adaptive sports suspension system – here it is called Dynamic Stability Damping Control – and a mechanical limited-slip differential. Both give the $59,990 Stinger GT an on-the-limit edge over its lesser siblings. 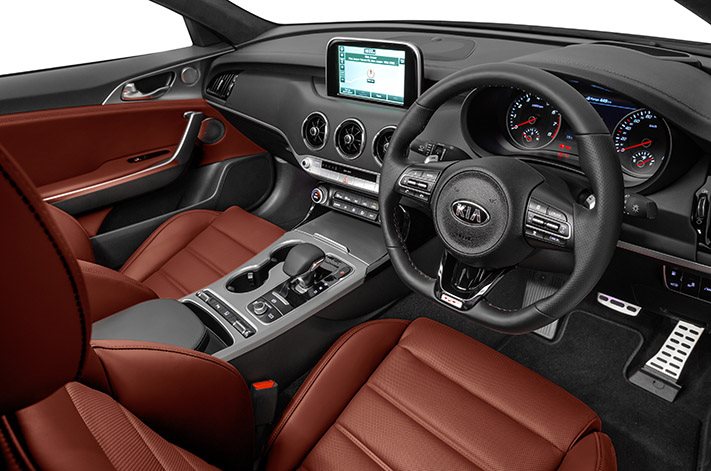 Put the selectable damping system in Comfort mode and the Stinger GT floats over imperfections in the road, even absorbing potholes and road joins without fuss. It does a better job of it than its conventionally sprung cousins, the $48,990 330S and the $55,990 330Si.

Pricing is almost like Kia doesn’t want you to buy the more pedestrian versions of the Stinger, featuring a 182kW/353Nm turbocharged 2.0-litre engine. Stepping up from the Kia GT-Line, as the top-spec four-pot with adaptive suspension but no LSD is known, to the more plainly monikered but more capable GT is just $4000. By comparison, the jump from a Commodore SV6 to a V8-engined SS will see you stretching an extra $7000.

The steering, meanwhile, is unKia-like in its feel. Yes, there’s still that sponginess on centre, but the front wheels communicate what they’re doing in a way that’s easy to read. It’s the benefit of mounting the electric assist motor down on the rack rather than on the steering column, and something that will soon be rolling out to the Kia Optima. 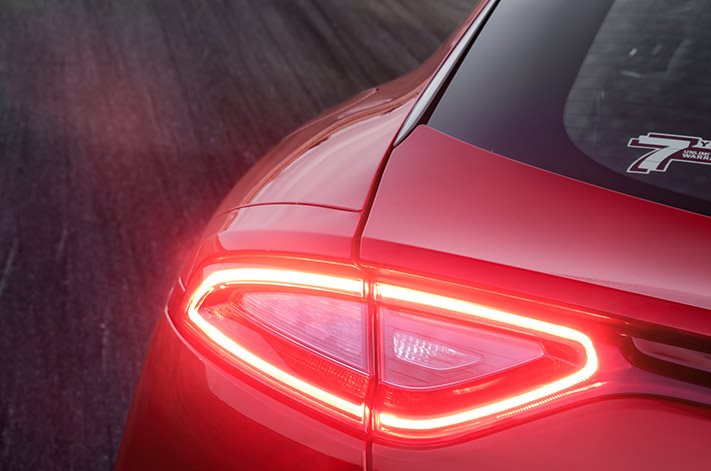 On the road, the adaptive suspension’s sport setting does have a hard edge and presents itself as somewhat unforgiving, but it does hold the already very rigid Stinger flat through corners. There is a Dynamic setting on the selectable drive mode’s menu, better suited to cruising flat roads and then turning up the wick when a series of corners call for attention.

The one criticism, though, of the V6 is its throttle pedal. It’s sensitive, with even a gentle press tapping the twin-turbo engine’s full potential and making a precise throttle application something of an art. Use the paddle shifters (which time out and automatically select “D” if you take too long changing gears – there’s no manual mode to lock it into) and the engine will rev out to 6000rpm before changing itself up. To tap the 6500rpm redline, you have to switch off the stability control.

You may want to try that anyway. Hold down the stability control button for three seconds and you discover the Stinger GT – just like the other five models in the range – has come to Australia with a launch control function. Hold a foot on the brake, let the engine build its revs as the driveline loads up and rear squats slightly in anticipation, dump the brake pedal within four seconds and the Stinger GT will launch itself down the road without a hint of wheelspin. The rear will take on some attitude, so you still need to control it via the steering wheel. 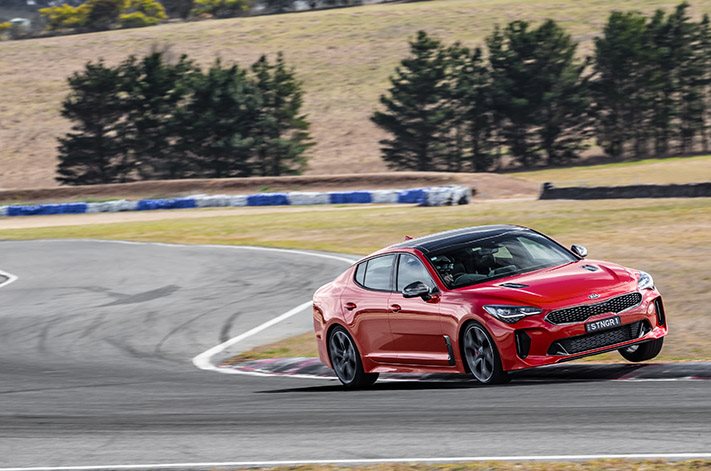 It’s just a shame the V6 version of the Stinger doesn’t have the acoustics to back up the official 4.9-second 0-100km/h time. There’s some induction noise, and a muted soundtrack of flat exhaust, but that’s it.

Kia is working on a “hotdog” bypass system for the twin rear mufflers that on the only car fitted with them introduced a low growl on acceleration and a little bit of a pop and crackle on a trailing throttle – one of the track cars had the system fitted – but that will be a dealer-fit option at a price that is yet to be determined.

Kia says it will have the system approved by the Stinger’s October 1 on-sale date, and is even working on one for the 2.0-litre engine.

Underneath the Stinger GT is a package that will have purists smacking their lips in anticipation, and one that will also reward them. It’s a shame, then, that it lacks a little of the emotion needed to match the swagger.

But the Holden Commodore SS-V Redline also comes with its flaws, and we’ve loved it. Could we one day feel the same way for the Stinger?