The latest addition to the growing Mercedes-AMG GT family bringing more power than the GT S but a more comfort-oriented chassis tune. The new variant is positioned between the GT S and flagship GT R and is on offer as a convertible or this – the coupe. 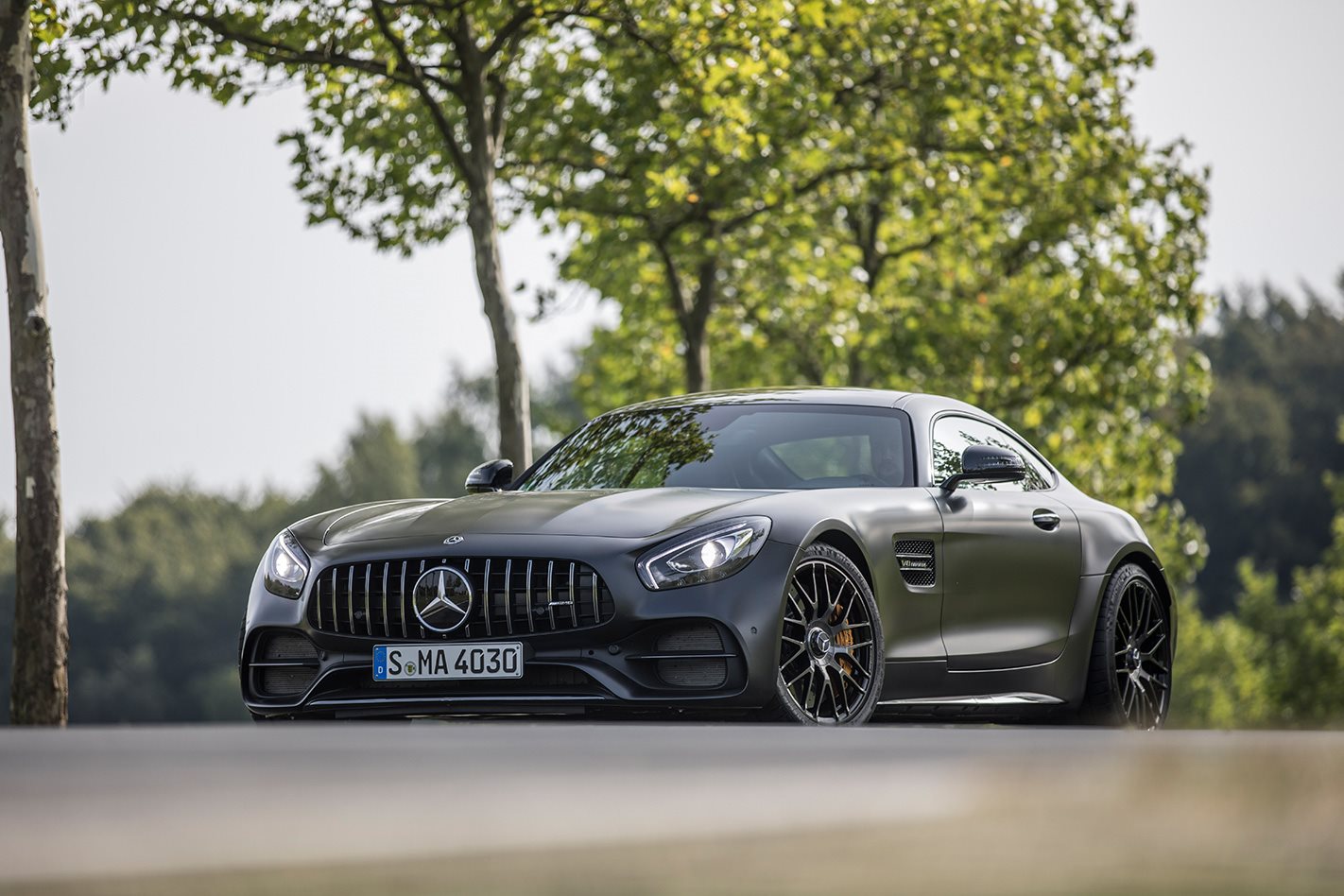 Even with an imminent GT S power upgrade, there is still a gap of nearly 50kW between it and the GT R flagship which the new AMG GT C fills with 410kW. Instead of offering an incrementally sharpened chassis over the GT S however, the GT C actually promises to be more comfort oriented.

More power with a more liveable ride; what’s not to like?

Offering a version of the GT that is more powerful than the GT S but focuses on providing a more liveable package is a bold move that has paid off. If the new GT C was simply an incremental step up in all areas, the purpose of each variant would be increasingly hard to define. 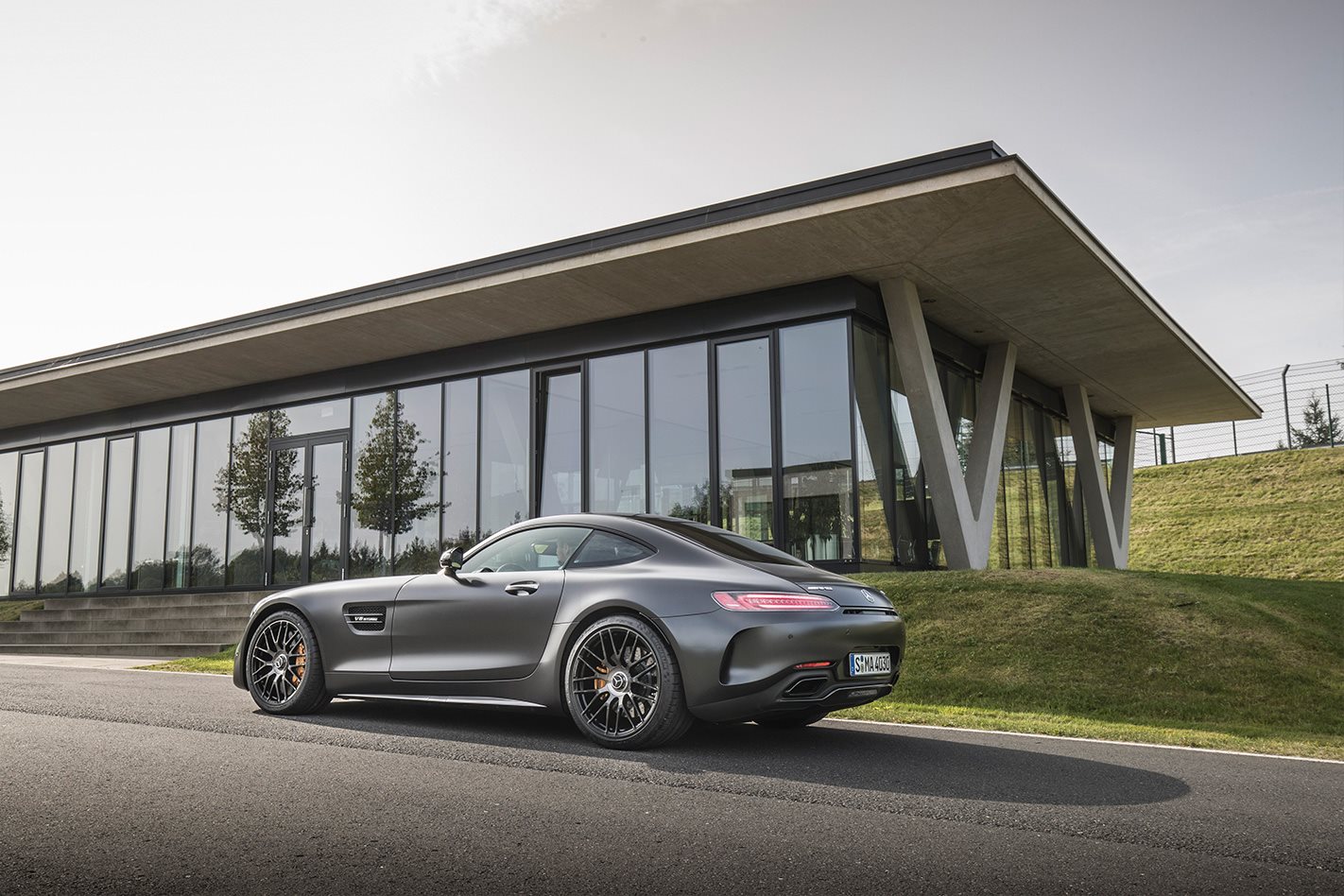 As it happens, the most potent sub-GT R version makes a lot of sense. If Mercedes is to get serious about countering the Porsche 911’s dominance in the high-end sporstcar market it needs to offer its customers lots of choice.

But the GT C is not choice for the sake of choice. Like each of the 911 variants, the six GT options all have a job to do, and with a massive punch of power, rewarding dynamics and head-swivelling looks, the newest addition in coupe form is the all-rounder of the range.

THE first time I slotted behind the wheel of the Mercedes-AMG GT S and got in a few laps at a very cold and wet Mount Panorama, one of my first impressions was not that the 375kW rear-drive coupe could do with a bit more grunt.

Since then I’ve had the opportunity to test the flagship GT R on AMG’s own Bilster Berg track in Germany and even though the conditions were perfect and the most potent variant has a host of features to help get 430kW to the asphalt, I’m still convinced the garden variety 350kW GT would keep most petrol heads happy.

So what is the purpose of the new GT C Coupe?

The current range is fairly straightforward. As power increases from GT through GT S to GT R, each respective chassis gets an incremental tune up to match the extra output, but the GT C is different. 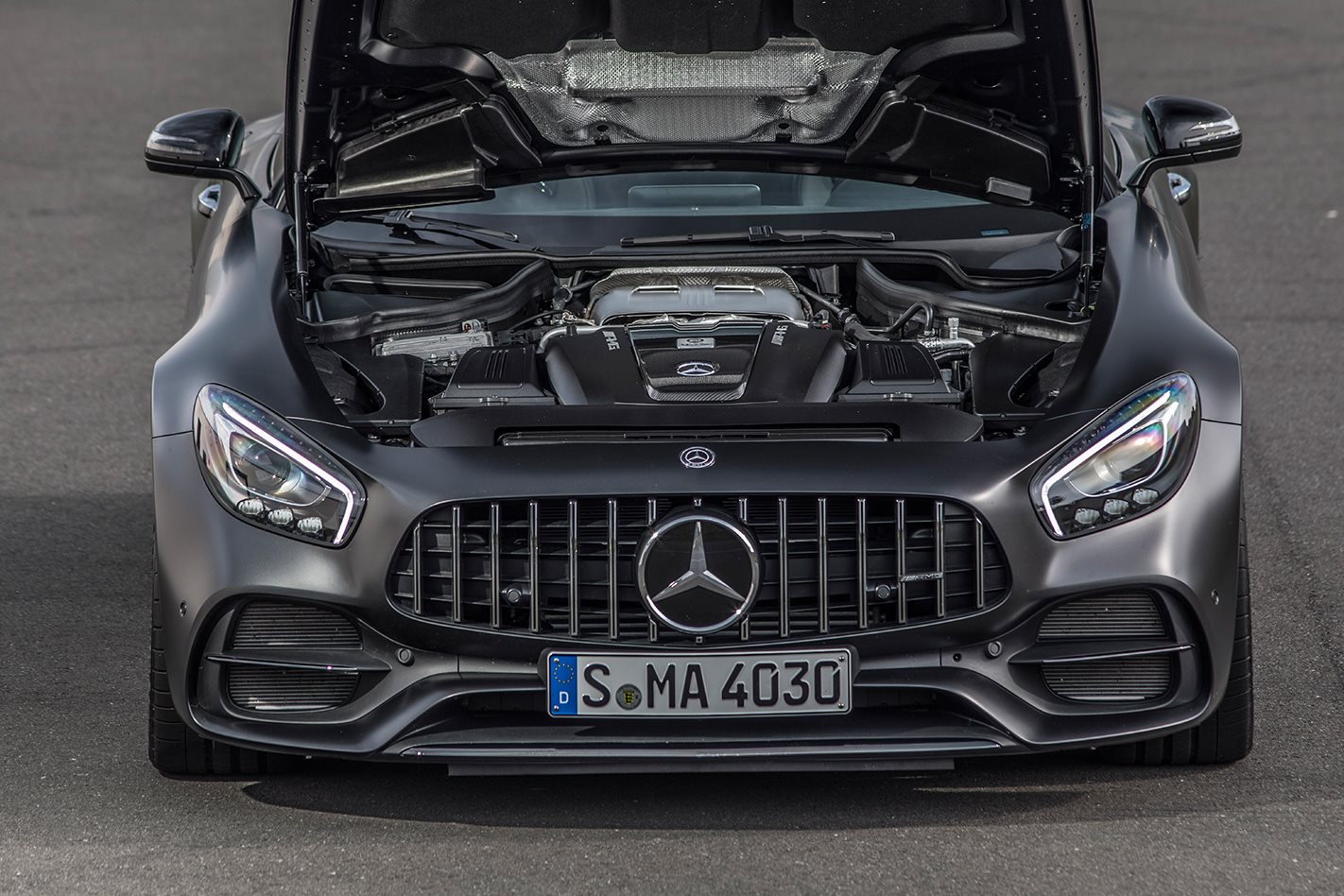 In the power stakes, it slots into the range between GT S and GT R with 410kW but it is equipped with AMG Ride Control adaptive dampers and suspension tuned more for comfort (that’s what the C stands for) without significantly compromising driving dynamics, says AMG.

While the GT C coupe is less highly-strung than the GT R, it does share the range-topping variant’s rear-wheel steering and wider rear track for increased stability at speed and, while it wears wider rear rubber than the GT S, its 305/30 R20 tyres are still a little skinnier than the GT R’s 325/30 R20s.

The latest addition to the range is therefore aimed directly at a customer looking for the ultimate in AMG GT pace without having to live with the GT R’s more track-focused defining features.

For now, the GT C coupe is only available in a special Edition 50 specification which celebrates AMG’s half-century with a number of features including a choice of Cashmere White Magno paint or the Graphite Grey Magno satin finish applied to my test car. 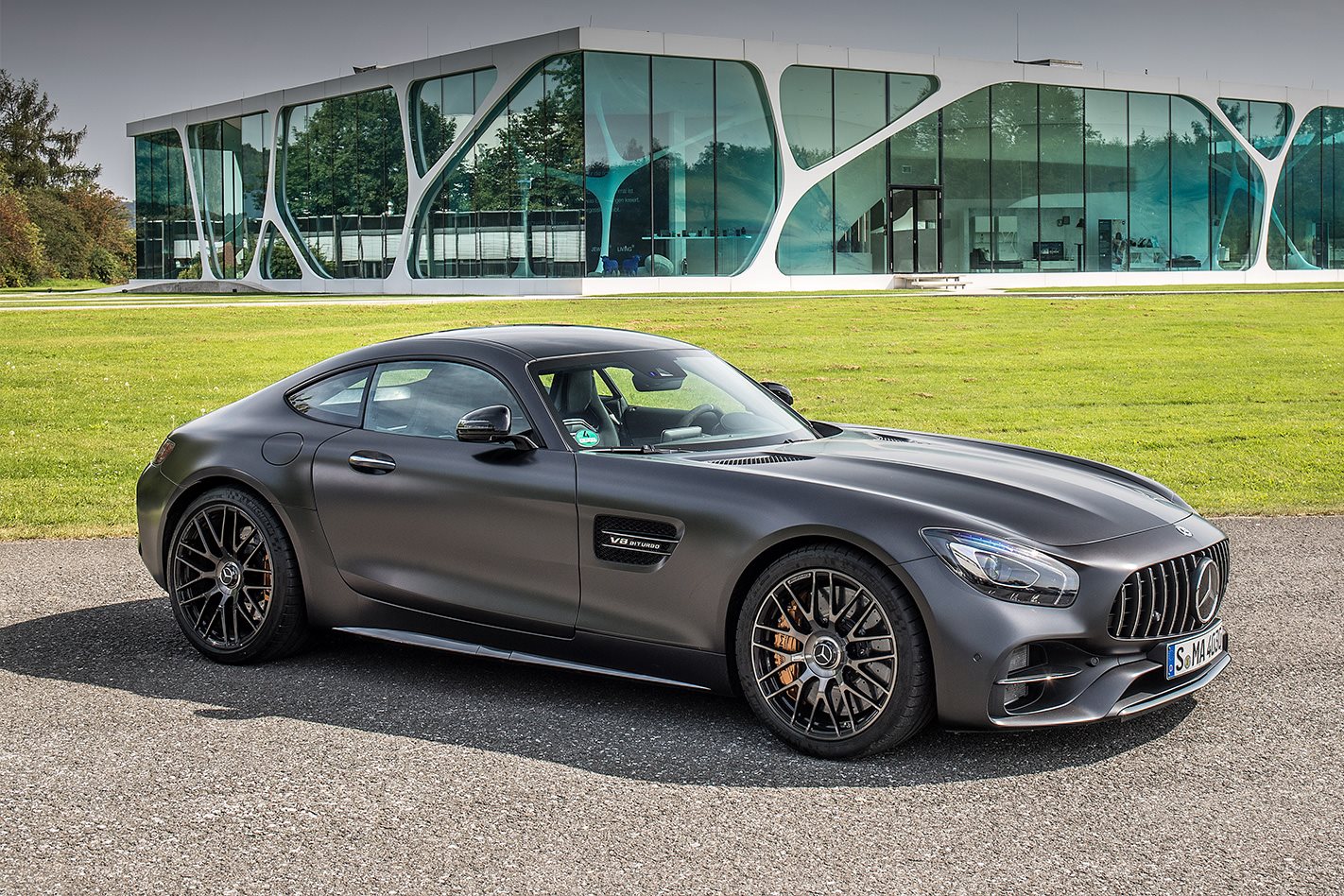 The switch to the company’s proliferating Panamericana grille brings a hungry look to the nose and a purposeful hint at the potent engine that lies front-mid mounted. The GT has an undeniable presence in person and dressing it up in either a conspicuous bright tone or this sinister stealth black only adds to that imposing quality.

Even though our test drive route had been well trodden by a fleet of GTs over the previous days, locals still craned their necks to track the passing GT C with an affection its rivals probably couldn’t brag.

On the inside, the cosy but comfortable cabin is common to all GT coupes but more Edition 50 touches had decked this car out with silver pearl and black Nappa leather upholstery with diamond stitching and a synthetic suede-wrapped steering wheel for a racing feel.

General cabin comfort is consistent with all variants with the exception of the GT R’s divine racing bucket seats which some occupants may not appreciate. From the driver’s seat, the massive bonnet points the way like a bloodhound’s nose and sniffs out a line through corners. 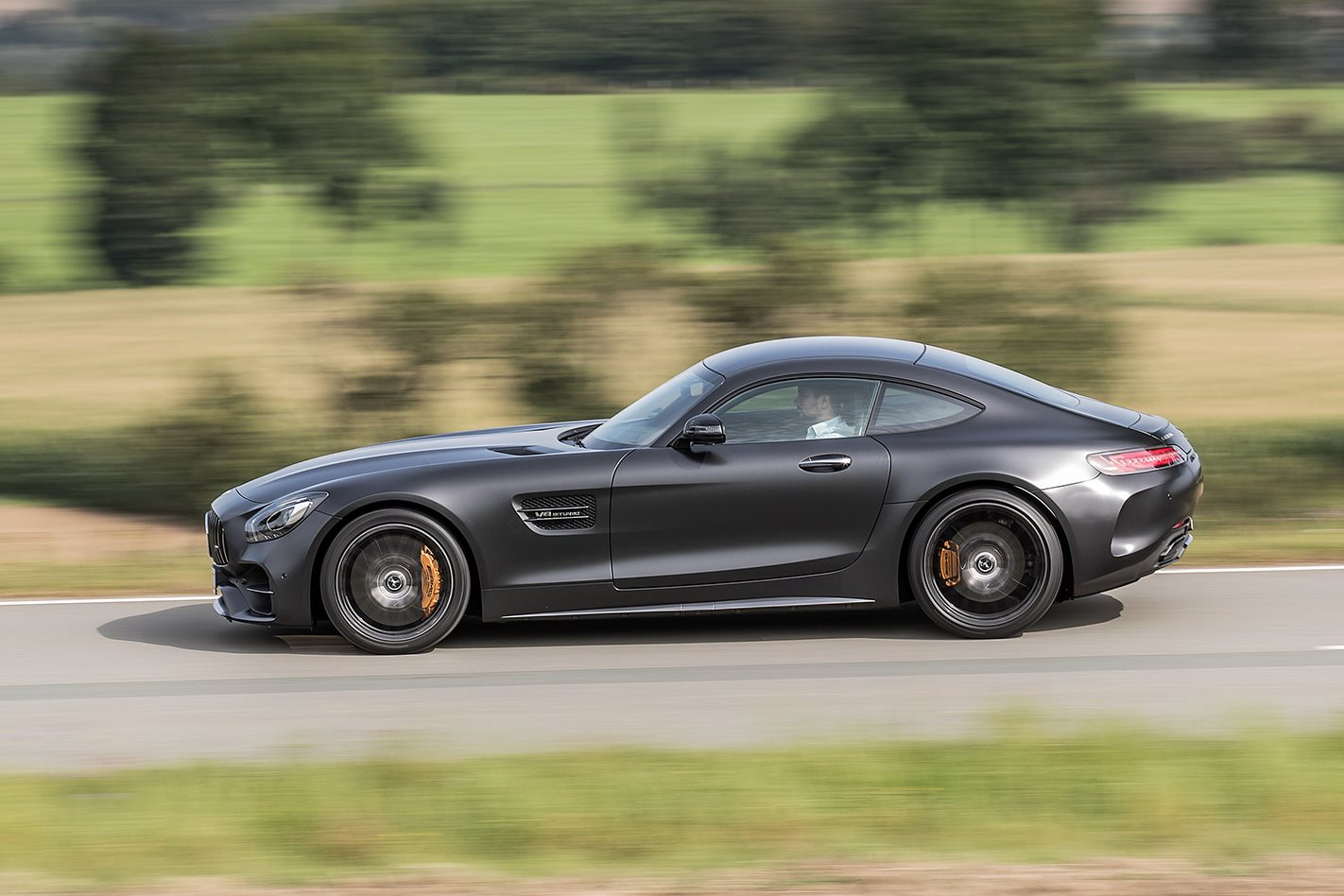 No variant is short on grip with a solid composure and a body that resists roll with physics-defying stubbornness, but the GT C has been given the rear-axle steering and Ride Control dampers of the GT R which adds a new level of nimbleness without having to resort to a prohibitively stiff tune.

Piloting the new version along German country roads highlights two things. Firstly – how spoiled German drivers are by the incredibly well maintained roads and, secondly, despite the more comfortable approach, the GT C still has a stiffly sprung ride, and this is likely to be accentuated on Australian roads.

For a majority of cruising, the new coupe would probably provide all the comfort and luxury for anyone prepared to tolerate a firm ride. Tyre noise is surprisingly low given the rubber’s width but that could be another indirect compliment of German road quality.

Find a twisty section however, and the GT C coupe’s proximity to the GT R in the range becomes clearer. I didn’t muster the bravery (or perhaps foolhardiness) to reach speeds at which the GT R’s effective aerodynamics come into play for comparison, but at a more clubman pace its closely related sibling is hugely capable. 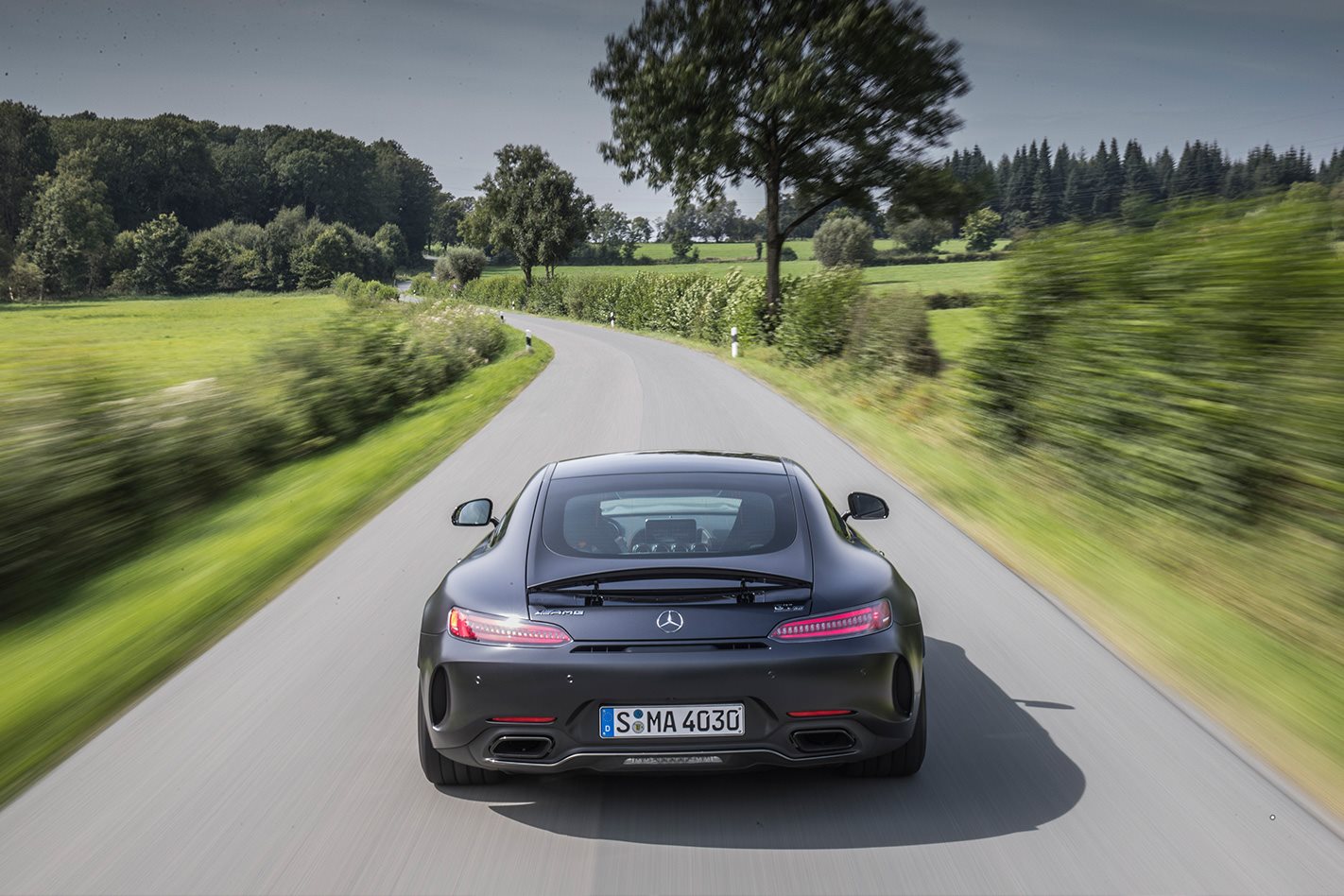 Flick the drive mode into Sport + or Race and the electronic stability takes a back seat allowing a confident driver to feel somewhere between capable and heroic, and a remote winding road with plenty of visibility allows a feeling of pure connection.

There is a little vagueness to the steering that is kicked into touch by the Porsche 911’s ultra-tight front end and poise, but the minimal steering numbness is balanced by the excellent rear-axle feel.

With the new steering back end, the GT C follows a line with the obedience of a Labrador and is confidence-inspiring particularly in corners that had not completely dried from the morning’s early rain.

Perhaps it is the wider rubber, rear-steering or less severe suspension settings, but the GT C feels as though it has more grip in damp conditions than the GT S I was acquainted with on home turf, which is commendable given the power and torque boost. 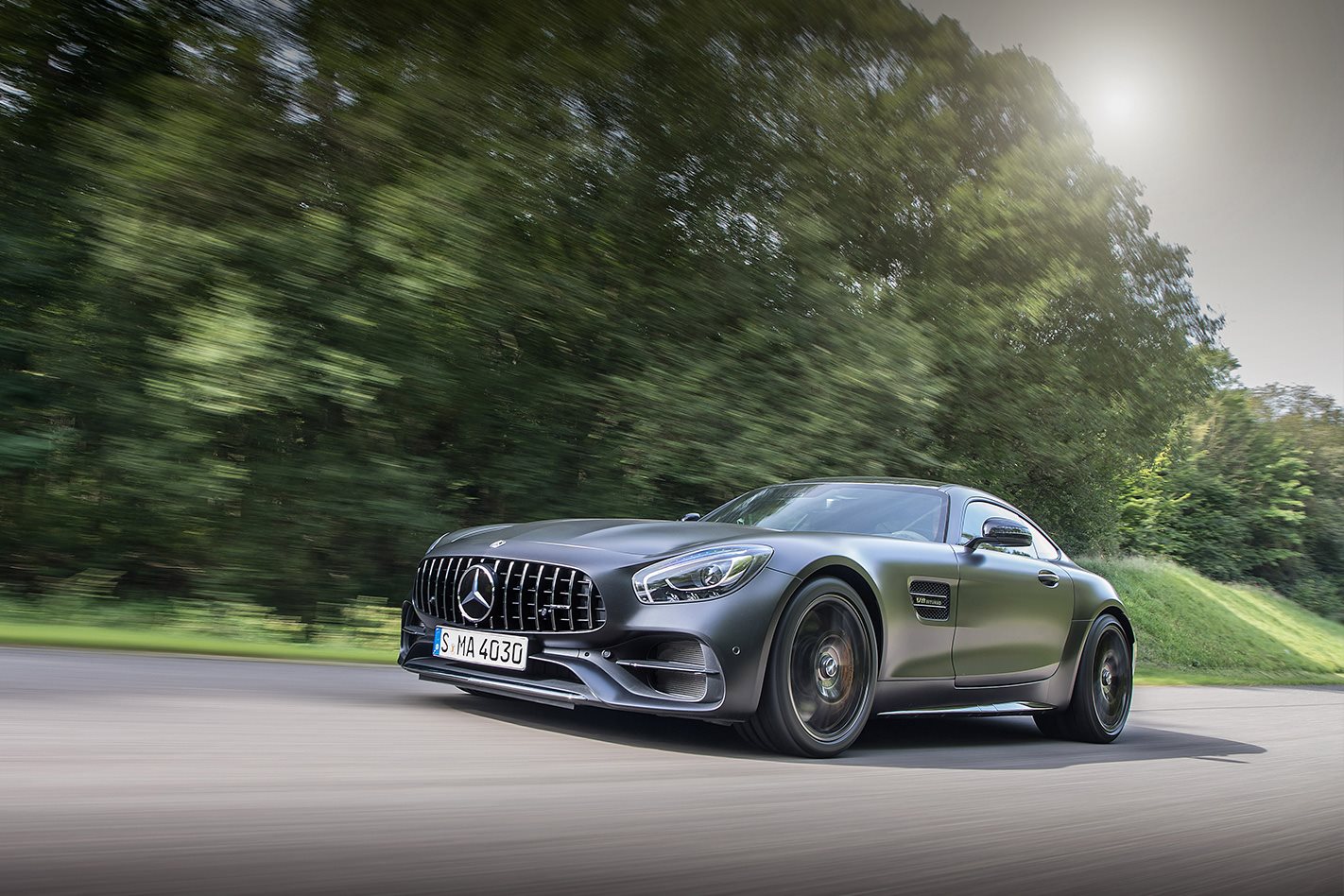 With just 20kW/20Nm fewer than the GT R, straight line acceleration is hard to differentiate between the most potent variants – AMG says there is just one tenth difference in the zero to 100km/h dash – which is particularly impressive given the GT R’s 70kg weight advantage.

Off the line urgency is lively and feels every bit of the official 0-100km/h time of 3.7 seconds but it is the GT C’s acceleration in higher gears that really impresses. Wring the turbo V8 out to its governor and the pace has a limitless nature with peak power occurring 500 rpm higher in the rev range than the GT S and even GT R. The GT C might not quite keep up with the GT R on paper but it sure feels every bit as rapid.

AMG’s accomplished V8 has found its way into the C-Class, E-Class, and S-Class in various states of tune, but it is in the GT that its bark is most authentic. With its unusual quad exhaust, the GT R wins in the volume stakes but the GT C’s report has all the character at a volume that will not become tiresome.

In offering the new GT C in both coupe and convertible choices the GT range has grown to six offerings and, if the line-up continues to expand, it might start to look something like Porsche’s extensive 911 spread. 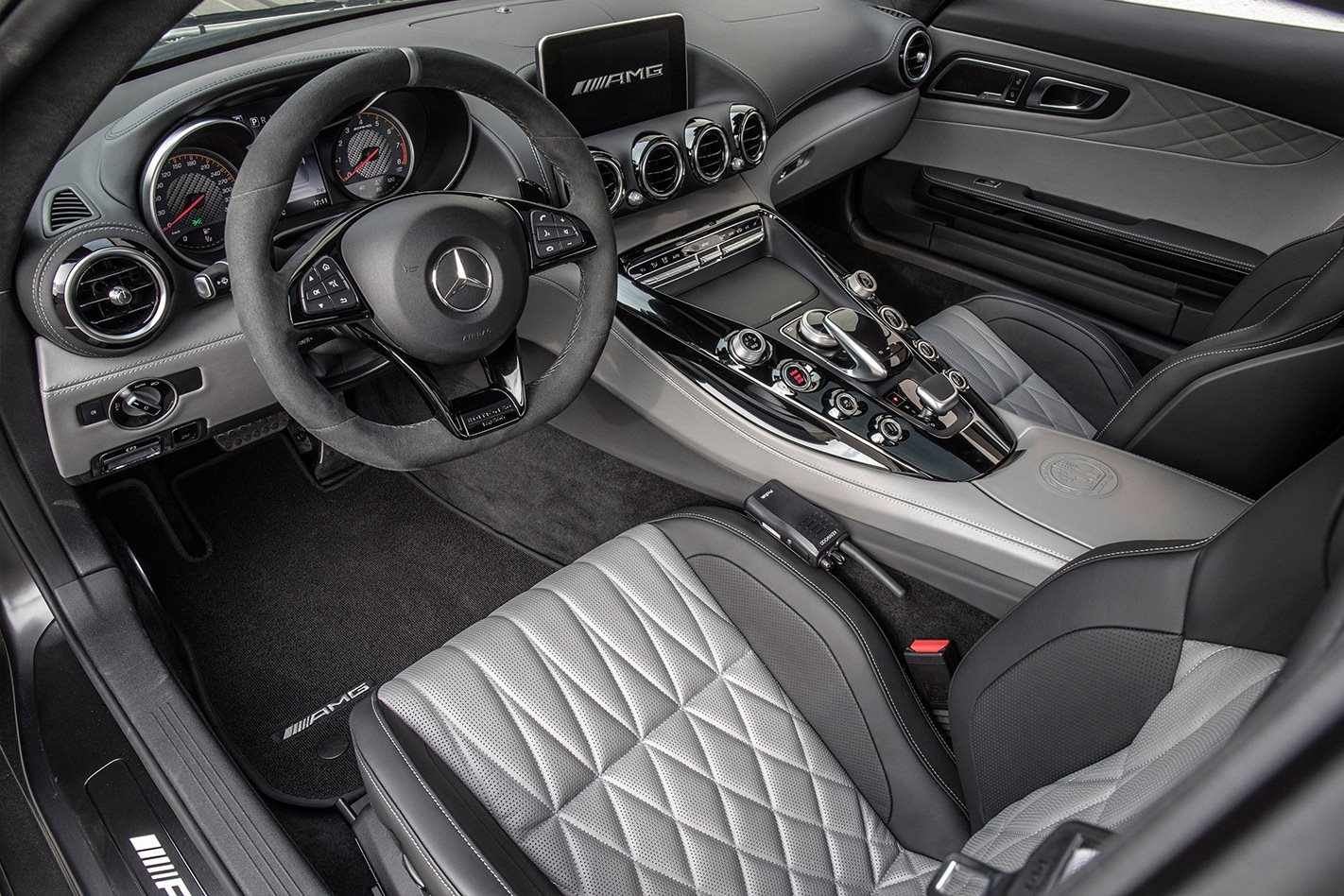 Zuffenhausen’s iconic model is the most obvious competitor of the Mercedes and for performance, the new GT C aligns closest with the 911 GTS. Both offer a compelling, if very different package.

For pure driving dynamics, the 911 wins on traction and edges out the Merc for outright dynamics but other hi-po coupe enthusiasts will be drawn to the GT C for its unapologetic V8 sound and power delivery.

And GT C drivers will get looked at more than 911 drivers whether that be a quality to be praised or criticised.

Either way, I feel the ancient argument of Porsche 911 versus (insert challenger here) is less relevant here given the fearsome brand loyalty that exists in the high-end sportscar market and particularly Mercedes owners. 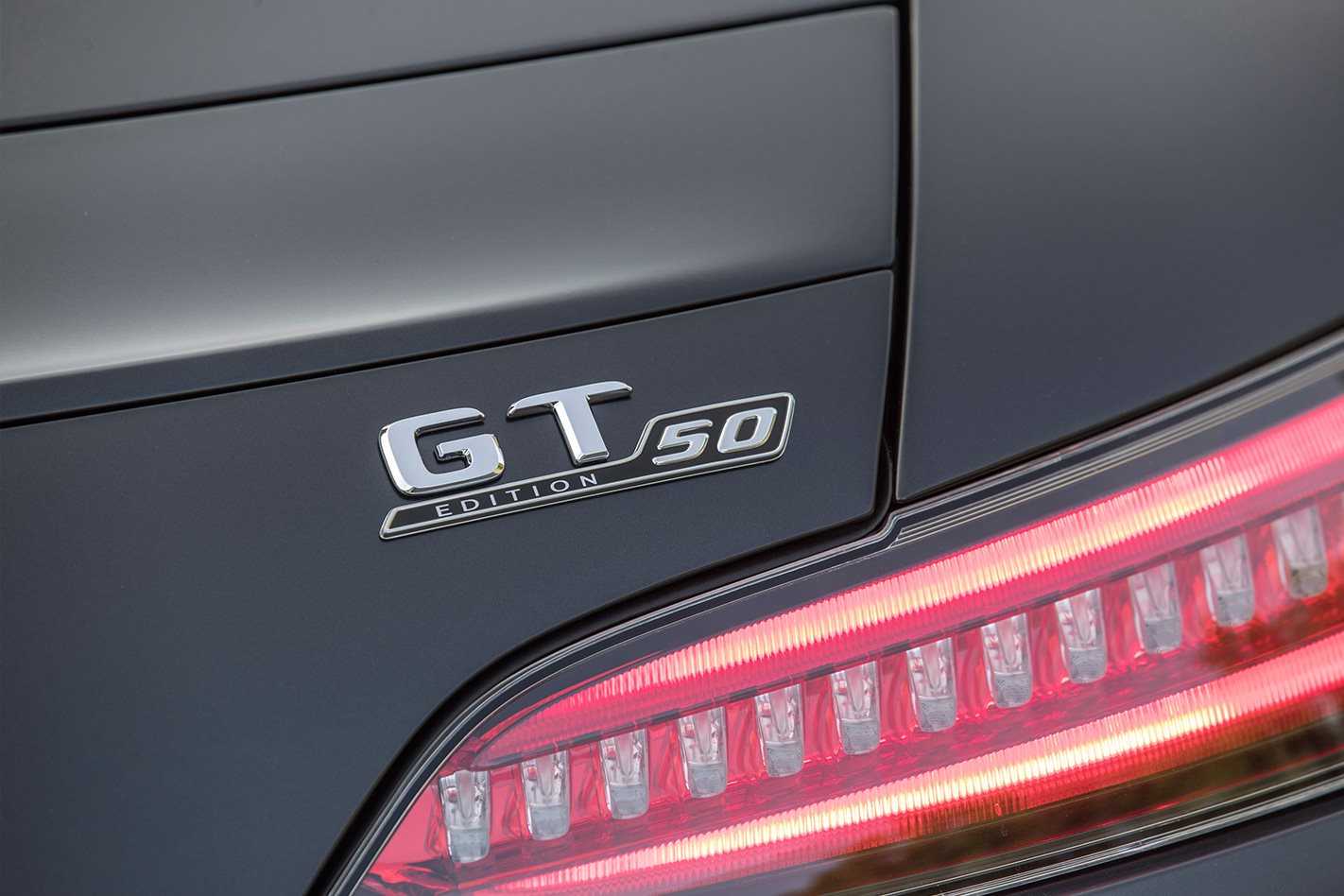 If the GT C is all about daily drive comfort coupled with weekend performance hidden behind a drive mode switch then the 911 GTS narrowly steals the lead but only just.

Until we get a chance to test the GT C on home turf, the coupe’s exact value proposition will have to wait but what is already clear is that its clever balance of power and comfort is likely to resonate well with and Australian audience.

While all other variants exist in the satin green shadow of the GT R, the GT C Coupe represents not a compromise but a choice. When the sun is shining and the circuit beckons, the AMG GT flagship will leave everything for dust, but for the rest of the time the new GT C is the dominant player. 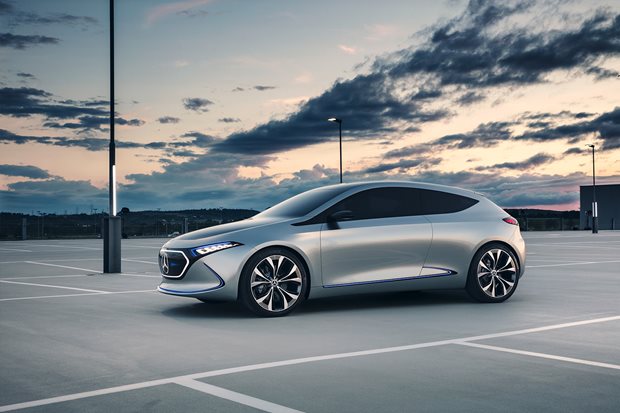 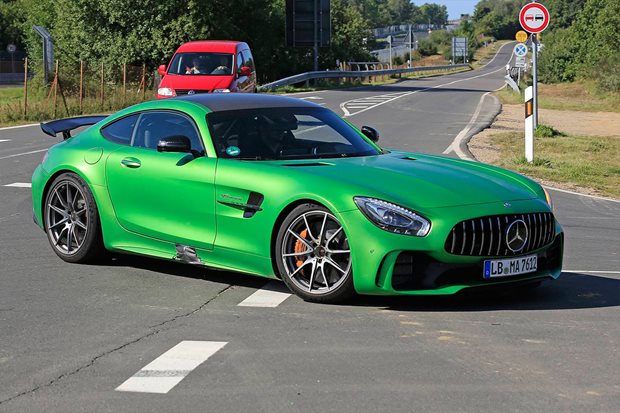 A faster, lighter, altogether scarier AMG GT is on the way, and here’s a first look at its development 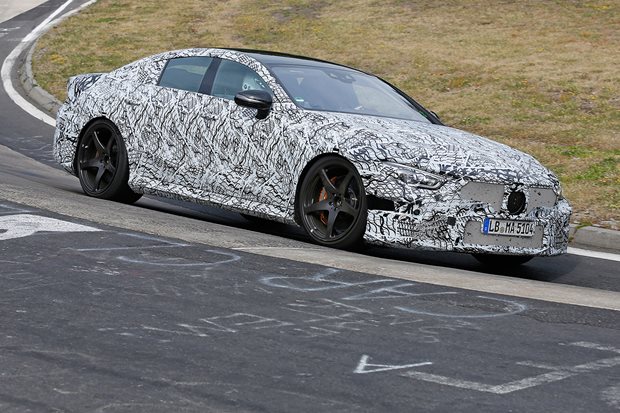 AMG’s next big thing hits the track as it gets ready for a late-2017 debut. 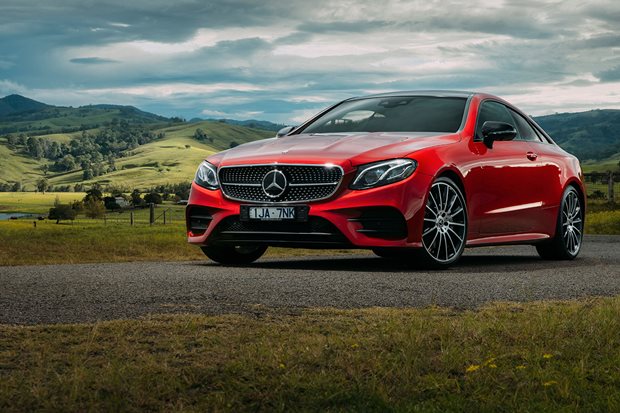 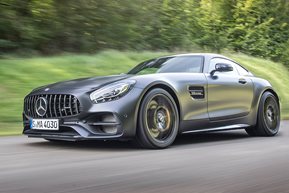