Volvo’s pinning big hopes on the sharp-edged shoulders of its first-ever small SUV, the XC40, and our first overseas drive shows it’s more than just a belated attempt to cash in on the SUV craze

The XC40 is Volvo’s first attempt at a small SUV, lobbing into showrooms underneath the XC60 and effectively replacing the V40 Cross Country. Initially available in T5 petrol and D4 diesel form with Momentum, Inscription and R-Design grades for each, it will be available in Australia around April 2018 Beyond just being the first car from the Swedish brand to hop into the ultra-competitive (and very much lucrative) small SUV segment, the XC40 is also significant in that it’s the first production car to make use of Volvo’s brand-new Compact Modular Architecture (CMA) platform. As the chassis that’ll underpin Volvo’s future volume-selling passenger cars and SUVs, we have a keen interest in finding out if it’s any good.

The XC40 is a high achiever, and you don’t need to drive it long to figure that out. Even just sitting in it tells you much about its character, with a classy interior that feels properly upmarket – and to a greater extent than any of its competitors.

Competent on the road, refined, and designed to be not only attractive, but practical as well, the XC40 could very well be the car that elevates Volvo from also-ran to household name. 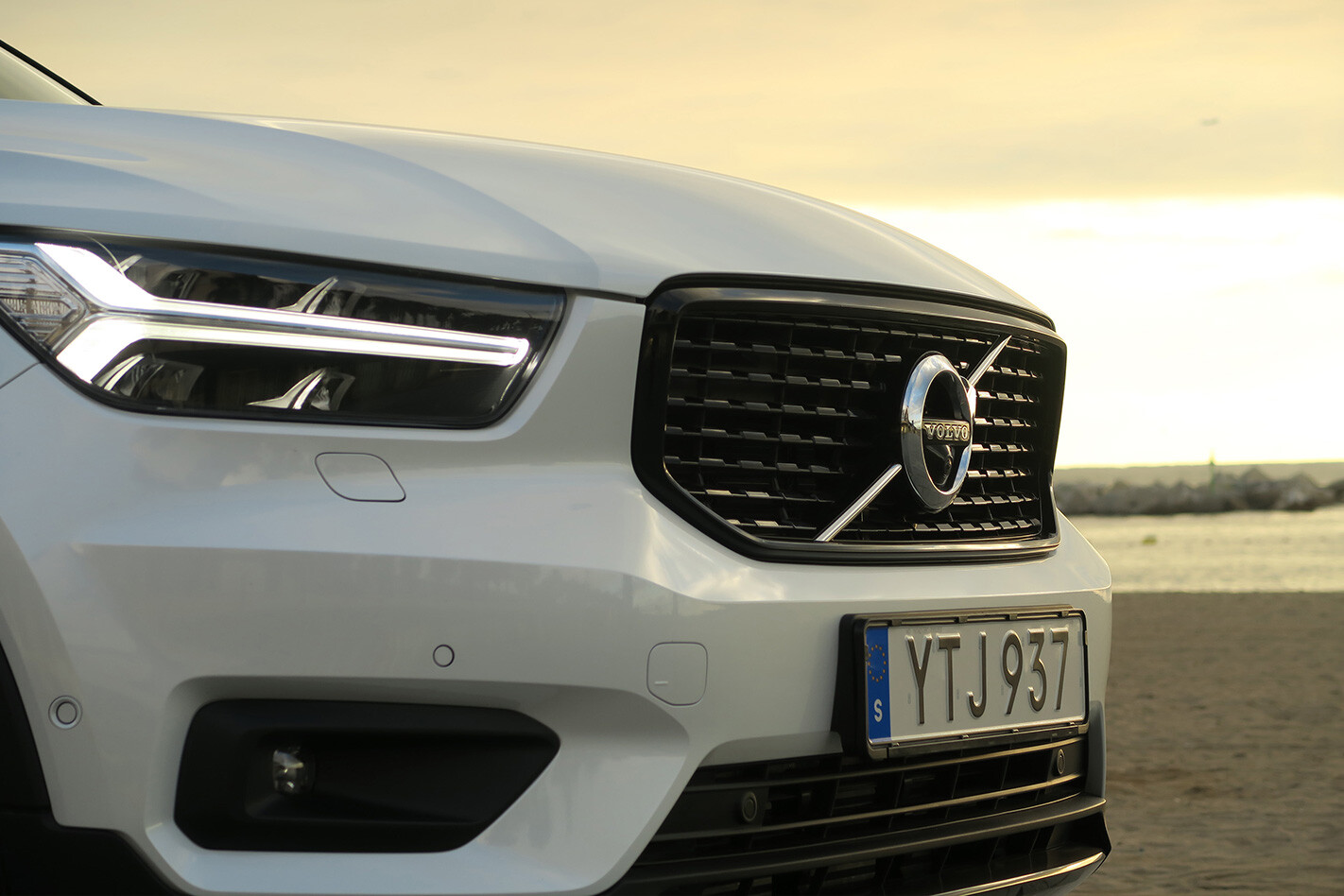 EVER been the 'new kid' at school? A mid-semester interloper who one day showed up at the front of the class, shoes polished, uniform pressed and pencils sharpened, months after the other kids had already settled in? The Volvo XC40 is that kid, and it's the high-achieving type that the other students are bound to hate.

It's studious and impeccably presented, and while it's no jock, it's got enough athletic ability to make those on the sports team a little jealous. Teacher's pet? You bet.

But while the other kids, who go by the names Q2, Q3, X1 and GLA, will probably do their best to shove the XC40 off the monkey bars during play lunch, everyone else will likely adore it. Here's why.

Call us shallow but physical appearance matters. The XC40 breaks the mould slightly by forgoing the traditional six-window side glass config of most SUV wagons and adopting a hatchback-style layout that has the turret ending with a C- rather than D-pillar. The Alfa Romeo Stelvio and Jaguar E-Pace do the same. 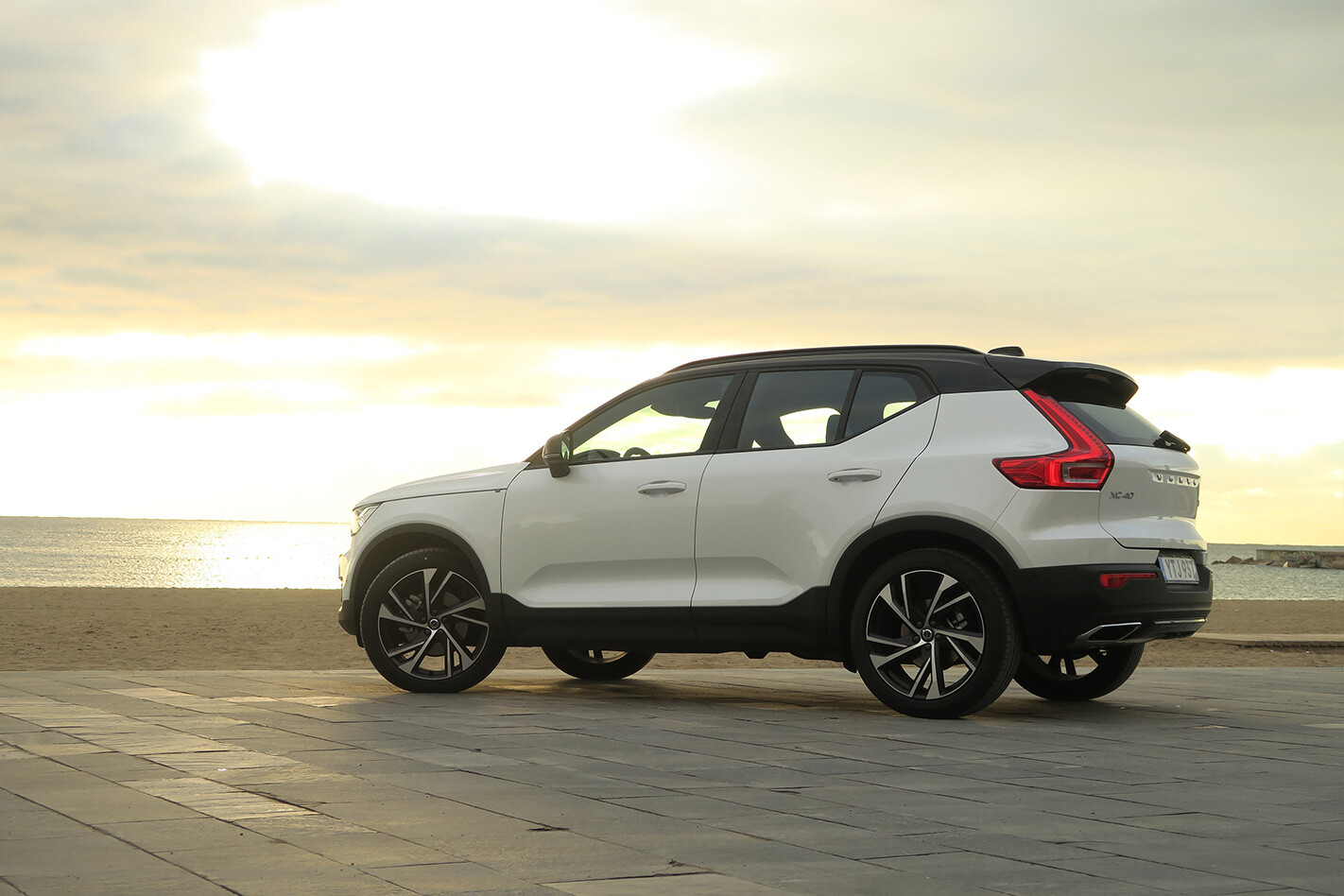 And that C-pillar is thick. Broad at the base and narrowing toward its intersection with the roof (where you'll find a VN-VY Commodore-style seam-concealing strip) it looks bulky and awkward in photos, but actually appears less heavy-handed in the flesh. It does have an impact on over-the-shoulder vision, but it’s not as bad as you might think. The big wing mirrors afford you a better view of what’s behind, anyway.

Elsewhere, its crisp creases and youthful interpretation of Volvo's traditional Iron Mark grille and vertical tail lamp graphic leave you in no doubt as to its heritage, without being simply a down-scaled version of the XC60 or XC90's clothing. The Q2 has a similar modernist bent, but we couldn't say the same of the derivative GLA or X1. The XC40 breaks the mould, and is more handsome because of it.

On the inside, the XC40 has been designed with an oh-so-Swedish approach to maximising utility without sacrificing aesthetics. Take, for example, the door cards. Boasting massive pockets lined with industrial felt, the XC40’s front doors are capacious enough to carry a full-size laptop, slim briefcase or sizable handbag. Volvo deleted the door speakers to facilitate that, but invented an ingenious solution to ensure sound quality wasn’t affected: instead of two door speakers, there’s now one speaker deep within the dashboard that sends sound out through the dashboard air vents. 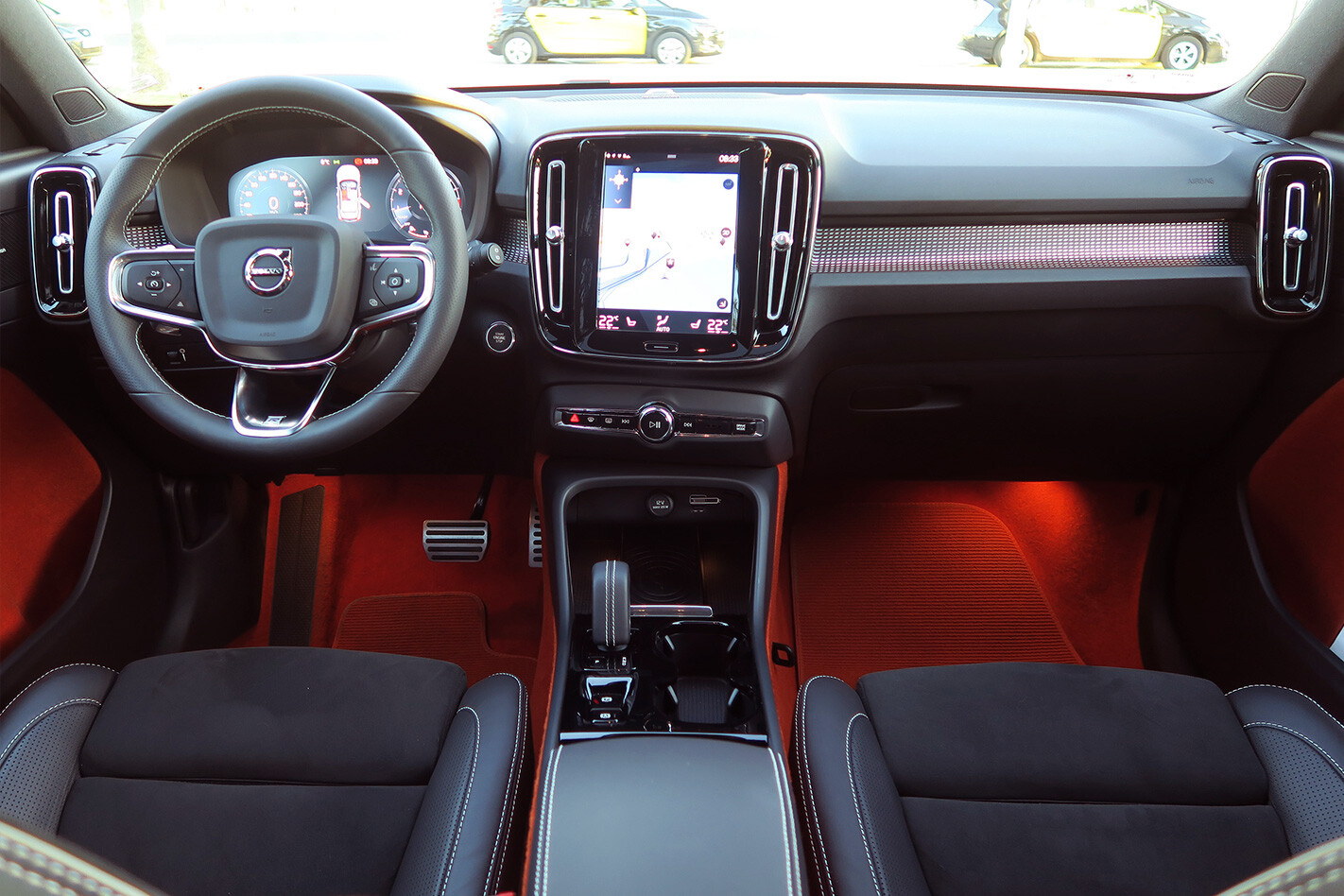 Neat. Just like the removable rubbish bin in the centre console (no more choccy wrappers in the footwell), integrated phone charging pad (that’s one less cable to carry) and flip-up boot floor with integrated bag hooks (to keep your eggs un-scrambled).

Those features are matched with quality surfaces, abundant soft-touch plastics and high-end trim materials. According to Volvo, “if it looks like aluminium, that’s because it is. If it looks like wood, that’s because it is”. Volvo hasn’t forgotten the fundamentals either, endowing the XC40 with loads of headroom (even with the optional panoramic sunroof) and a roomy rear seat with abundant legroom and decent outward vision.

Authentic, useful, high-end. All of these descriptors apply. They’re worthless if the driving experience is poor, of course, but the XC40 scores highly there too.

Our first drive took place in Barcelona, and the cut-and-thrust of Spanish traffic provided a good proving ground for assessing driveability. Driving the T5 R-Design that will be the flagship model in Australia when the XC40 launches in April, we found the 2.0-litre turbo petrol to be the perfect partner for Volvo’s compact. Delivering a stout 182kW and 350Nm, the peak torque figure being available from 1800 to 4800rpm, acceleration to 100km/h is a fairly hot 6.5 seconds and aided by an AWD system that splits torque fifty-fifty between the front and rear axles on takeoff. 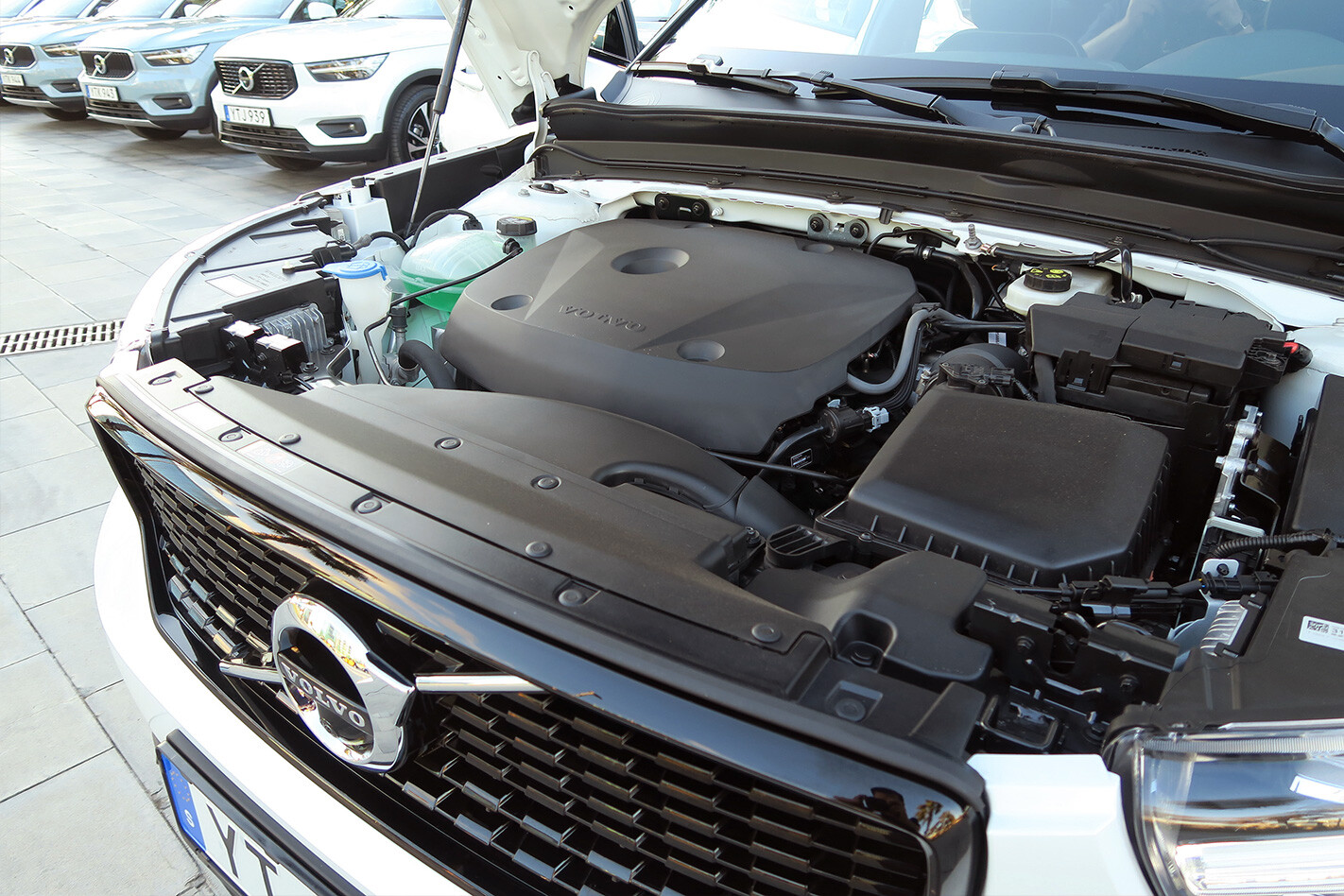 The driveline can be a touch snatchy when transitioning from coasting to accelerating or when kicking down a ratio, but otherwise the eight-speed automatic is a smooth, intelligent unit that rarely makes a misstep. Our only real complaint about the driveline is its lack of aural drama in T5 R-Design spec.

What’s most impressive, however, is the chassis. Riding on conventional MacPherson struts up front and a four-link independent rear end rather than the trick multi-links and composite leaf springs of its SPA-platformed cousins, the XC40 delivers controlled and stable handling that feels virtually unshakeable.

Three suspension tunes will be available, base Dynamic, mid-level Sport and electronically-adaptive Four-C. The T5 R-Design we drove was equipped with the Sport calibration, which boasts stiffer springs, dampers and roll bars than the regular Dynamic tune, and was also rolling on thin-sidewalled 20-inch alloys with Pirelli P-Zero rubber, yet ride comfort on long undulating bumps was outstanding. That said, the glass-smooth Spanish autovias that made up the bulk of the drive route threw up few challenges for the suspension to deal with. A more complete assessment will have to wait until our first local drive. That’ll happen in April next year, when the diesel D4 variant kicks off the range. The T5 will join it soon after, and both are expected to be priced well under similarly-specced rivals like the GLA and BMW X1.

Both the D4 and T5 will be exclusively all-wheel drive, however later in the model cycle they’re expected to be joined by a three-cylinder T3 petrol front-drive variant. That one’s still a long way into the distance, but its pricing could potentially dip deep into the $30k region. A fully-electric model is also in the product planner, with a rough ETA sometime in 2019.

What’s certain right now, however, is that the XC40 is off to a strong start right out of the gate. It drives well, shames its competitors as far as interior packaging is concerned, looks smart and feels properly premium. Volvo may have been missing out on the small SUV frenzy until now, but its first effort is well and truly a model student.