One newton metre – piffling, but enough for the new Falcon XR6 Sprint to pip its XR8 sibling for the title of Australia’s torquiest engine ever, 576 v 575Nm.

It’s fun to imagine this was deliberate. Ever since the XR6 Turbo arrived with the BA in 2002, Blue Oval powerbrokers have kept the V8 Falcons on their pedestal, protected from any threat externally – and internally.

The 4.0-litre, much-loved, venerable ‘Barra’ inline-six has always played second fiddle to the V8s for power and performance. 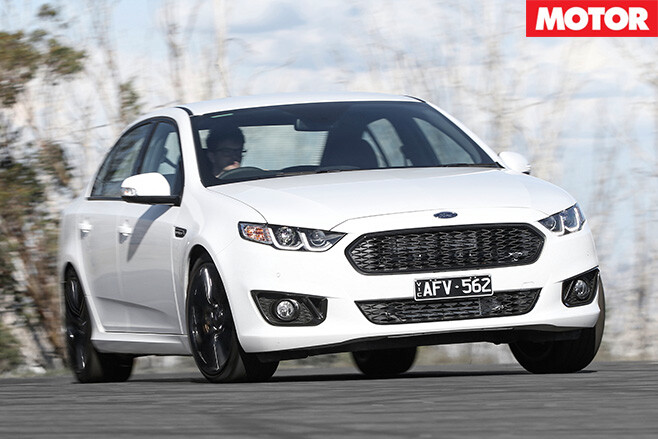 But with the Sprint program, Ford engineers were freed from any previous pecking order policies and allowed, within the constraints of what the driveline could handle, to unleash the Falcon sprint's full potential.

And in doing so they might’ve chanced upon an awkward truth, that if you’re going to make the best performance Falcon ever, the turbocharged six-pot might be the donk for the job.

But we don’t know this. Having driven both cars only on the launch in Tasmania, on fast-flowing roads picked by Ford, we want to push both Sprints through some tighter stuff before making a call on which might be the best (forgive us for wanting to be certain).

But of all the fast Falcons, we know enough to say the best is indeed one of these, Ford inadvertently creating a bit of sibling rivalry, it seems.

From the front, in white you’d get clobbered over the head by a Ford fan to say it looks like a taxi; it could have used a little chin spoiler under the front bar, but its subtlety will only serve to fool those not paying attention. 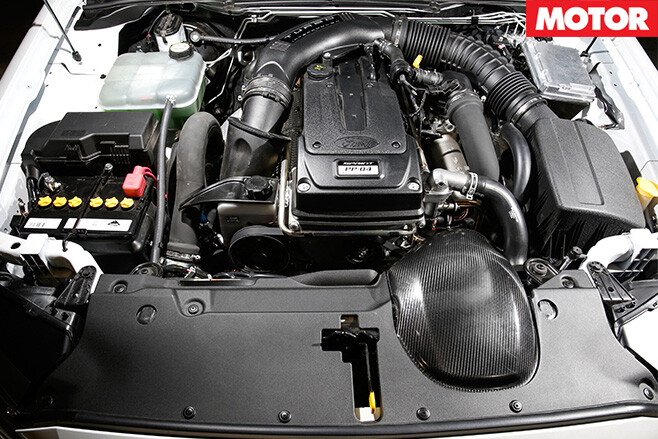 For its Barra-powered Sprint, Ford started with an XR6 Turbo engine and fitted new and FPV F6 bits, and will keenly correct anyone who refers to it as a wicked-up F6 engine. With a higher compression ratio, it is plainly not.

The end result is 325kW and 576Nm but as is also the case with the XR8, these are best thought of as minimum outputs. What you’re really signing up for is 370kW and 650Nm, available thanks to a "transient overboost" feature which lasts for up to 10 seconds, then resets, Ford pointing out you’re unlikely to spend more than 10 seconds at full throttle in any gear.

The power, like the XR8, decreases from maximum to minimum as engine temperatures increase. But for the vast majority of the time, the 370kW and 650Nm are yours for the taking. As such the turbocharged Sprint is a torque-billowing straight line monster, surely the closest a Falcon has come to, dare we say it, supercar acceleration.

In what could be the first time a humble Falcon can be closely compared to a Ferrari, Ford employs a torque-stepping strategy much like the new California T and 488, whereby torque is restricted in lower gears and unleashed incrementally to the full-fat 650Nm as you go from first to sixth. Ford doesn’t provide any 0-100km/h claims but we’re hearing 4.6sec is about right, which is lineball with the XR8. 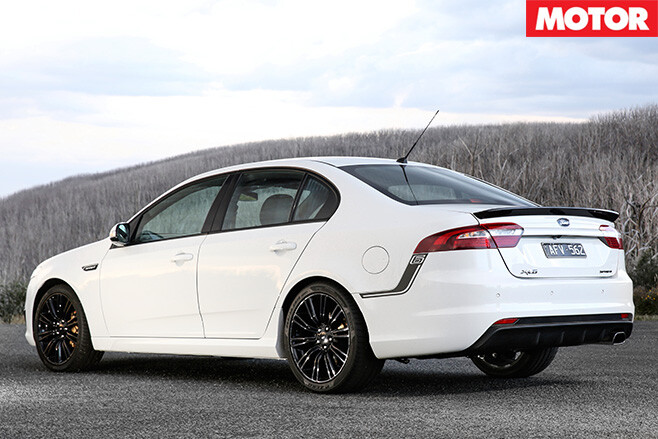 Under full throttle, the torque mapping of the XR6 Sprint creates quite a unique sensation: it doesn’t stop accelerating. Where most other cars start to peter out as you go up the gears, from down in the revs the turbo Sprint pulls with steam-train levels of torque, enthusiastic and strong all the way to redline where another gear can enter the breach uninterrupted. The XR6 Sprint just keeps charging. Its acceleration makes you want to keep your foot buried in it to see where it stops, but this is a game of chicken you will lose.

The six-cylinder Sprint bellows a subdued straight-six growl, the turbo also hissing away under power. Shut the throttle under load and there’s even a hilarious blow-off valve flutter at just the right volume.

Stay full throttle and grab another gear and, same as the XR8, there’s a spark-cut brap on the upchange. We’ve not met a Barra with as big a personality as that in the Sprint.

The supple, poised suspension has turned the XR6 Sprint into a high-speed cornering missile. You can barrel into third or fourth gear corners carrying speed you wouldn’t dare in an XR6 Turbo, the Sprint keeping its composure no matter what bump is thrown at it. And letting you explore the grip of those new Pirellis, of which there’s much more than a base Turbo. 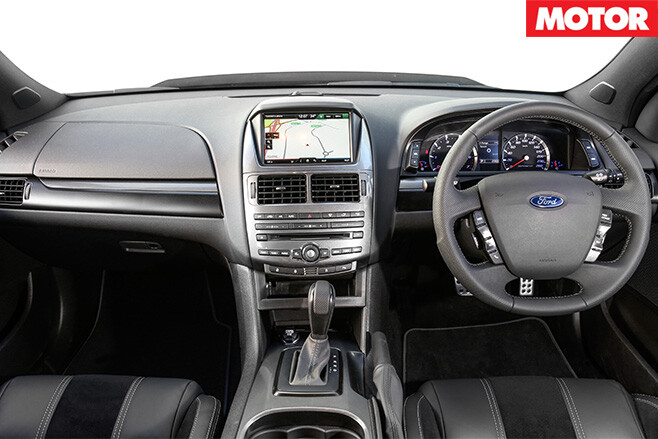 Though the Barra six is just 23kg lighter than the Miami eight (iron versus alloy block) those sticky Pirellis have 54kg less to deal with overall. In theory, this should make the XR6 Sprint the sharper cornering device.

Despite not being able to attack many corners in anything less than third gear on the launch, our experience so far seems to back this up, but we will reserve judgement until we drive them more comprehensively.

Much like the XR8 Sprint, our reservations lie with the front end – an FG X weak point. Based on our Tassie driving it feels to have improved but, as we’ve said, let us through a bunch of slower corners first.

Downsides? The interior is literally straight out of 2008, and the cruise control buttons, wiper and indicator stalks look terrifying similar to that in the BA Falcon launched in 2002. Fortunately you’ve got Ford’s new SYNC software on the centre screen to remind you it’s 2016. 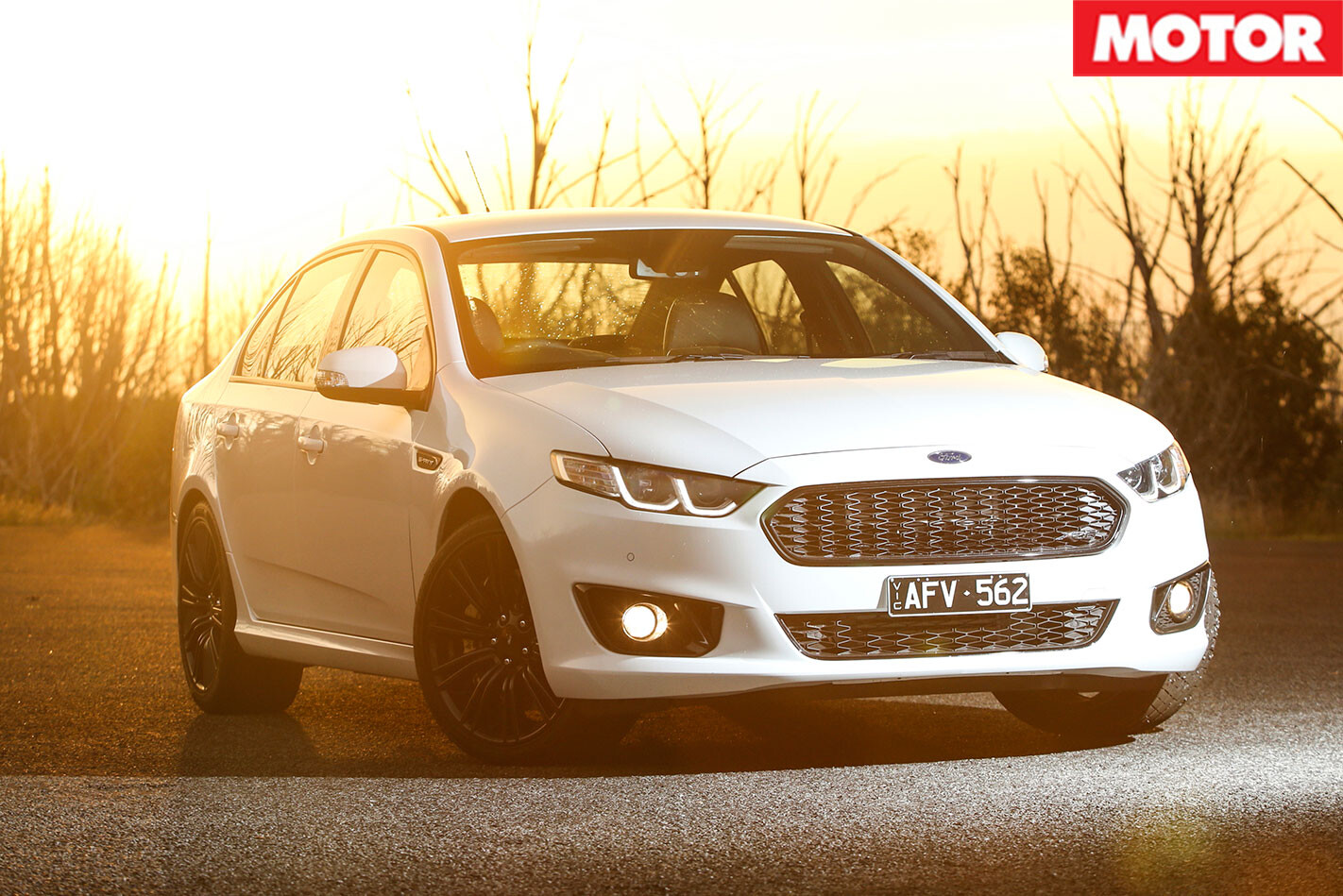 You could go on to complain the XR6 Sprint lacks technology as basic as shift paddles, let alone heads-up display and a multi-stage, modern ESP system, but you’ll arrive back at earth with a thud when considering this is a pretty well sorted, 370kW rear-drive family sedan for $54,990.

It could be the Aussie performance car bargain of the century, but we’re afraid the torque train has left the station, all 550 automatic-only XR6 Sprints already accounted for. Yep, sold out.

Lucky owners have nabbed themselves the best six-cylinder performance Falcon ever, and since the days of BA we’ve wondered just what the XR6 Turbo is capable of. A lot, it seems.

The XR6 Sprint pips the XR8 not just by one token newton metre, but also by price – and it seems performance, the six-pot Falcon as fast in a straight line but the sweeter handler.

It’s an awkward truth we’ll look to confirm in a future issue of the mag before the Falcons are gone forever, but while both Sprints will go down as greats, the best performance Falcon ever could be a six.