Welcome to the best V8 performance Falcon ever.

Welcome to the best V8 performance Falcon ever.

But the best performance Falcon ever? We’re not actually sure. Could be the XR6 Turbo Sprint - and what a problem to have.

For the Ford Falcon XR8 Sprint the Aussie engineers banded together to make the best car they possibly could with the resources they had.

As such it misses out on new-age performance gear like brake torque vectoring, shift paddles, heads-up display and a modern electric steering system (never thought we’d be singing the praises of that) but Ford will counter that you’re getting a 400kW muscle car for $61K. And fair call to that.

Design-wise they’ve painted the roof black (as opposed to a wrap, Ford will keenly point out - it has to go through the paint shop twice) and same, too, for several other exterior parts. A stealthy new lip wing is fitted to the bootlid and the XR8 Sprint, like XR6, scores smoked 19-inch wheels first seen on FPV GT-E. 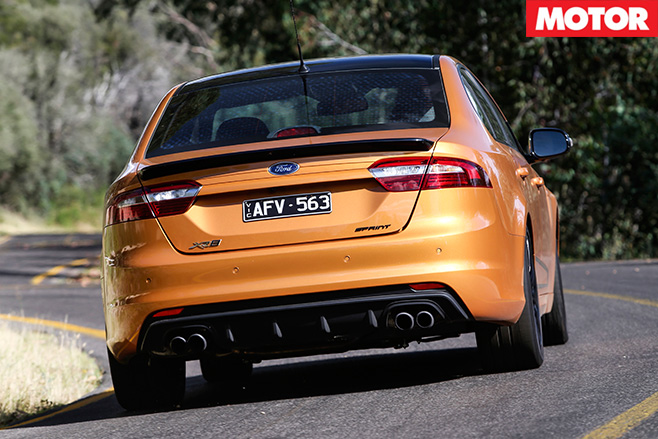 It looks subtle, sleeper-ish and smart - a car more likely to be spotted by those in the know than past in-yer-face Falcons like the be-winged T3 TE50 or BA GT.

But while the cosmetic changes might hint at a parts bin exercise, don’t dare call it that, otherwise quite a few Ford engineers might have something to say to you.

Next to the XR6 Sprint, the XR8 Sprints’ mechanical changes have been comparatively minor, mostly because the XR8 has simply enjoyed more of the R&D attention the last few years where the XR6 hadn’t.

Power is up from the base FGX XR8’s 335kW/570Nm, now 345kW and 575Nm. But Ford is almost proud to refer to these official figures more as minimums, the real numbers being closer to 400kW and 650Nm, limited only by the ZF transmission. (The engine could safely belt out much more, we’re told.) 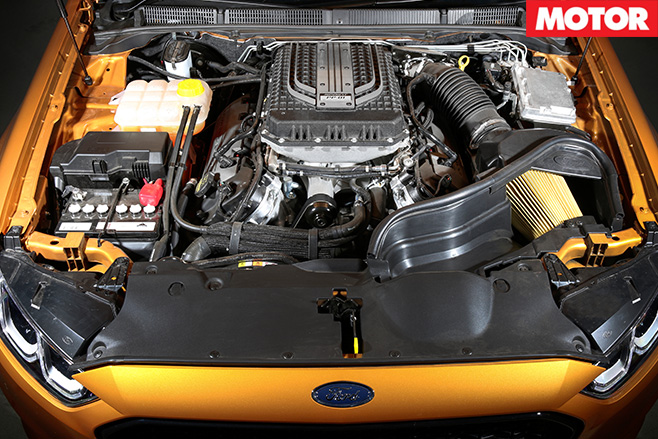 The extra, unofficial grunt is thanks to the 5.0-litre ‘Miami’ supercharged V8’s well-documented “transient overboost” feature. The full-whack 400kW and 650Nm is available pretty much all the time, except when it’s very hot, where the power will taper from maximum to minimum “like water being poured from a glass”, says Ford.

So the only time you might see 345kW and 575Nm is after 10 flat-out laps of a track, or a v-max attempt on the Stuart Highway in the height of summer.

The transient overboost lasts only 10 seconds but the grunt counter resets whenever you lift off, and get back on, the throttle. And you’ll rarely be full throttle in any gear for 10 seconds straight, Ford will remind.

The bigger news, and that which Ford is clearly most proud, are the suspension changes, which we’ve documented at length in this separate story. And they’ve had a profound effect on the XR8’s ride, now significantly improved. 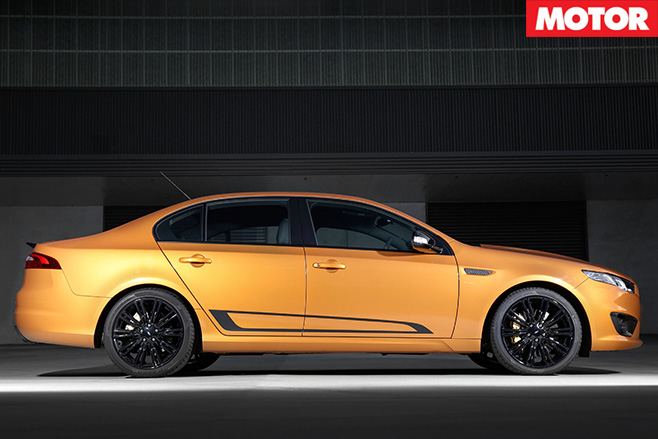 The base FGX XR8 jiggles over small bumps and thuds over bigger ones, making for quite the firm ride, but the Sprint is far more calm and comfortable without giving up crucial body control.

It feels stable and cool in the high speed stuff and in bumpy corners, expertly works undulations letting you get on with the business of attacking. Importantly, the suspension now feels as modern as the powertrain.

Obviously, the grunt is spectacular. And from any rpm, down-low to redline, it pulls hard, all the while making the most satisfying racket. Sweet, loud supercharger whine under load transitions to a throaty V8 exhaust note, roaring purposefully before its 6000rpm redline. It sounds awesome.

And it can put its power down with a cleanliness and effectiveness unmatched by V8 Falcons past. Even with ESP off, stall the auto XR8 Sprint up to about 2000rpm (we need to double check this rpm - stay tuned) on its brake, let off and the rear 265/35s will hardly wheelspin as the power is put to the ground, even at full throttle. 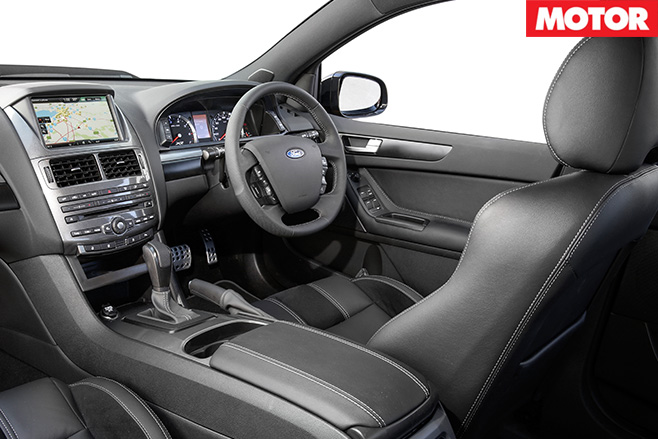 Ford's not claiming 0-100km/h times as per company policy but they reckon while more difficult to launch, the manual will be faster. We’ve been told already if we get a 4.6 from the manual and a 4.7 from the automatic, we should keep trying. To the tune of about another tenth, we may or may not be guessing.

We’re keen to test the in-gear acceleration because on the road, it feels almost brutal. Overtakes are dispensed with hilarious ease, sometimes the car opting to stick in, say, third gear even at 2000rpm as you give it full throttle, rather than kick down, simply because It Can. The torque just smushes you into the seat.

With a clunky change and heavy-ish clutch, the XR8 Sprint is not the greatest manual in the world so perhaps it’s more suited to auto. Gearchanges in the automatic’s manual mode are hardly twin-clutch quick and the down-changes are pretty average with some mean lurching and no rev-matching, but up-changes are quicker than ever and accompanied by a cool spark-cut brap. Grabbing a new gear just before redline, the acceleration uninterrupted, is terrific fun. 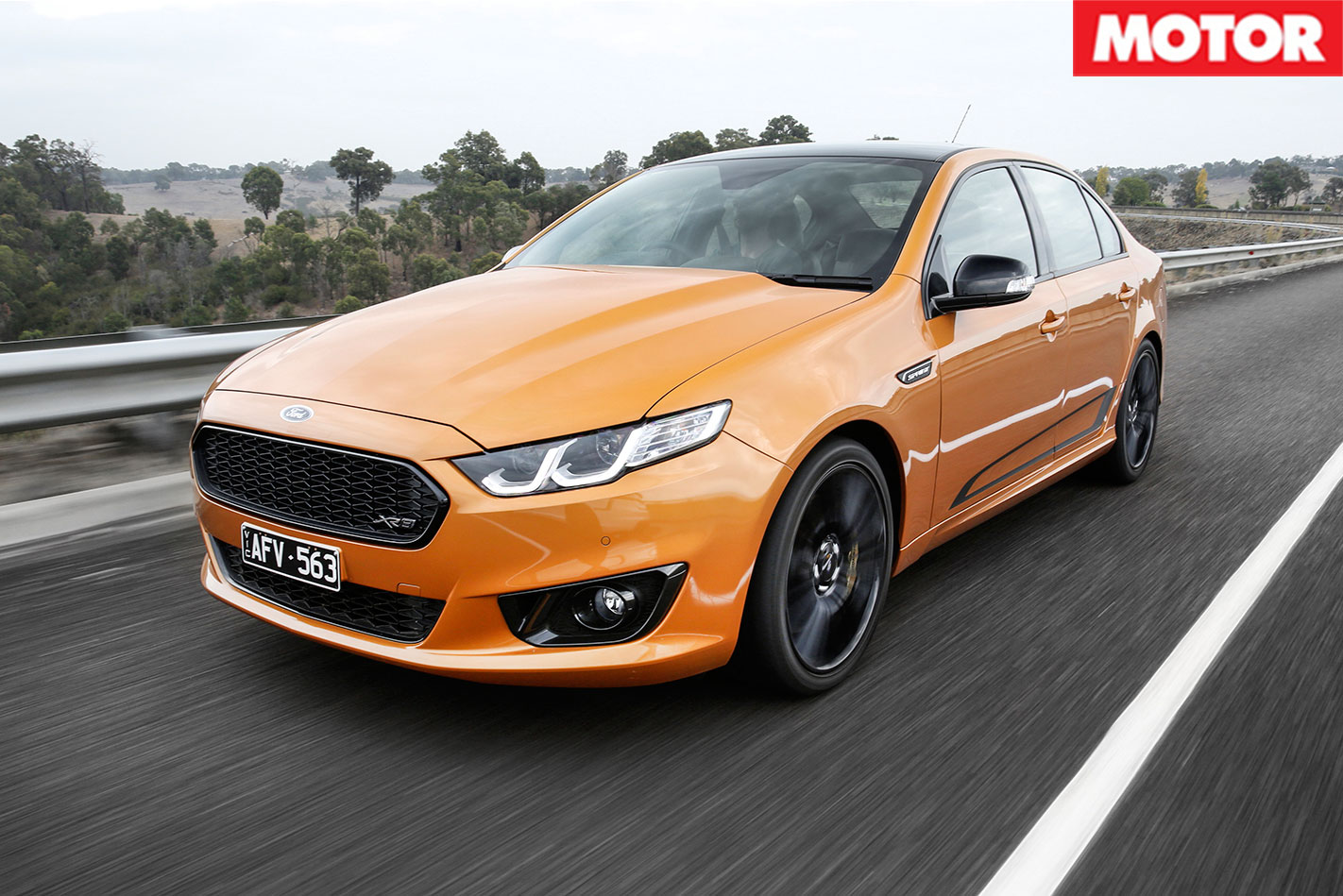 We’ll confirm numbers when press cars become available in the coming weeks, and we’ll also use the time to make a proper call on just how positive an effect those Pirelli P-Zero tyres have had.

Ford has hyped this change up to the max, the suspension being refined around this carefully-selected new tyre. (Previously V8 Falcons have run Dunlop Sportmaxxes.) And we’re keen to push the front end in some tighter stuff - it seems to sit flatter when you turn now, but still a concern as it’s the chink in the FG X XR8’s armour, especially on track.

Ford showed us some impressive graphs that suggested the XR8 Sprint’s pivot point has been moved much further back in the car, hopefully helping to get rid of some of that unwelcome front-end vagueness.

Initial impressions seem to be they’ve had success, although how much we can’t be sure, our Tassie test route very reliable for faster corners that played well to the Sprint’s strengths. 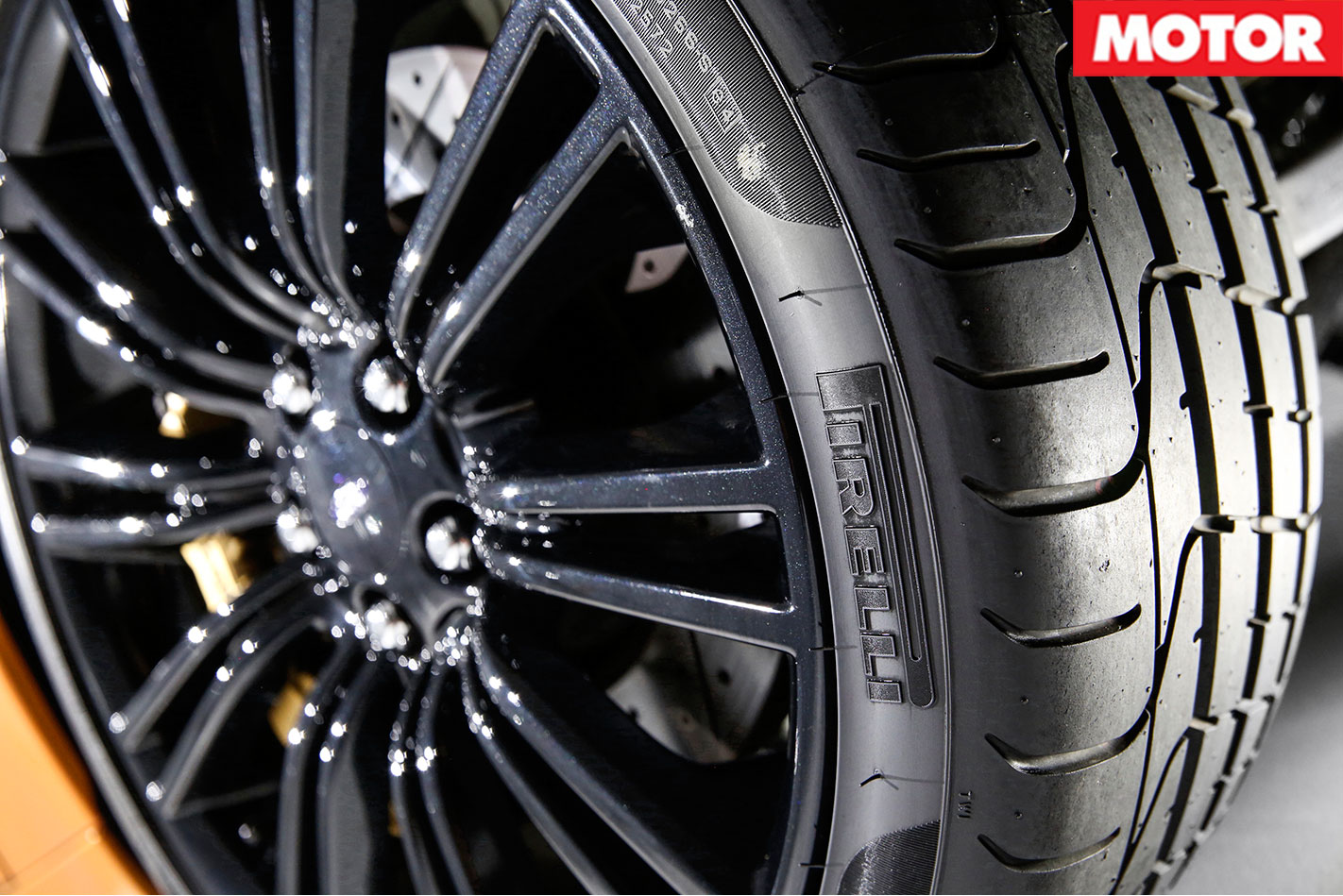 Forgive us, but there's absolutely no doubting the Sprint will be a world champion drift car - the FGX XR8 is practically that already, so with more power and better poise, with ESP off and an empty track the Sprint should be one of the funnest Falcons ever. One would do well to purchase their 265s in bulk.

Yeah, the XR8 Sprint is still no BMW M5-eater, it will get utterly smoked by a new C63 and the HSV GTS is probably still more polished in corners (owing much to a more modern steering system), but the XR8 costs significantly less than all of them and even if it was $100K we’d still love it. 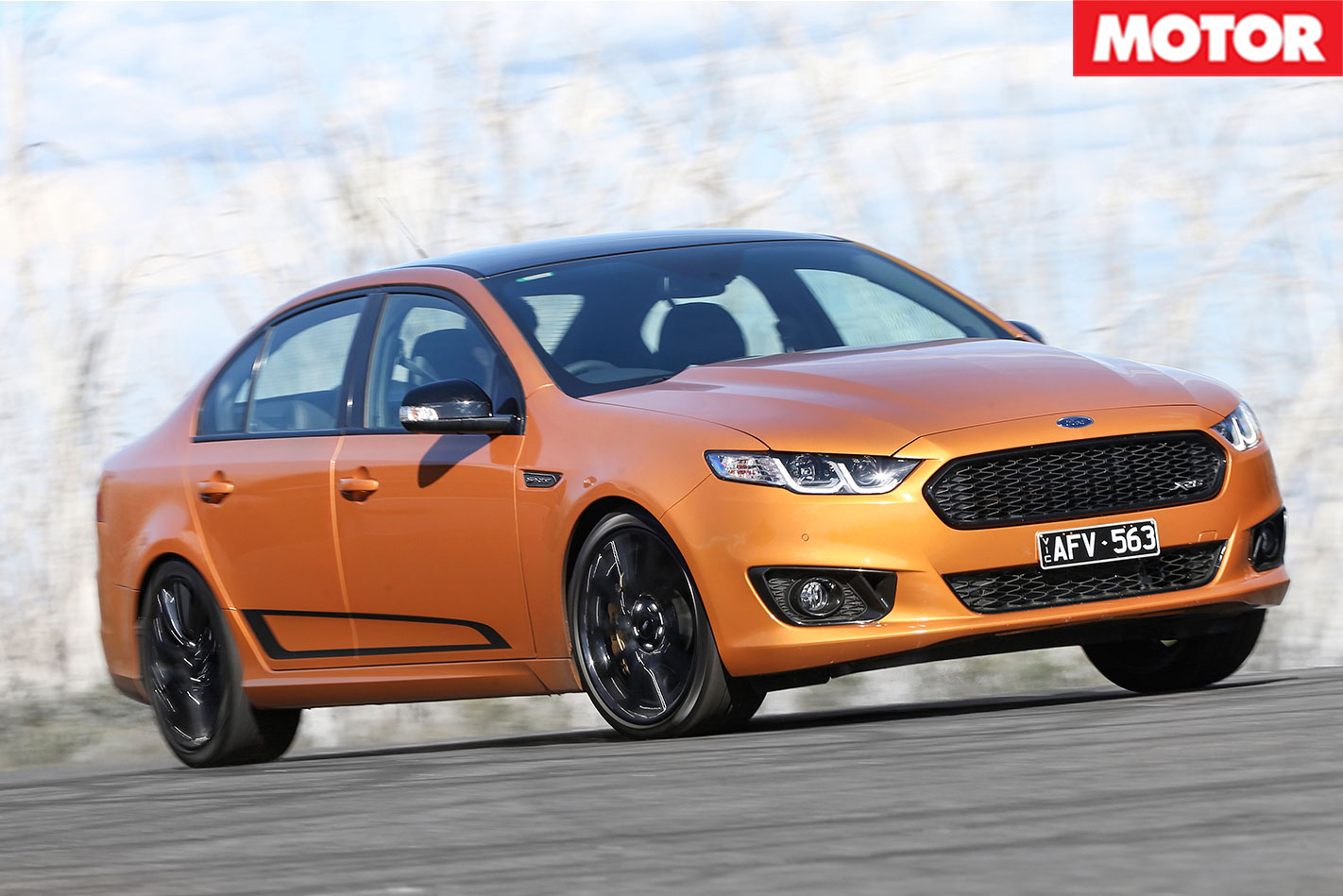 Far from perfect, it has an enormous personality and that most difficult of traits to engineer - it’s loveable. Truly, few new performance cars are loveable these days, let alone likeable.

Ford knows there’ll still be the haters, those wondering why it doesn’t have this or why didn’t they do that. Of course they could’ve done more. But how much do you want the thing to cost?

Those clued in, who see the bigger picture and the forces at play, will applaud Ford for this car. They didn’t have to do it, and who knows if they’ll make their money on this exercise. Who cares, in some respects.

Certainly the sales suggest it should be a success. Ford expects a near fifty-fifty split for manual and auto sales of the XR8 Sprint, the former $59,990 and the auto $62,190. Production kicks off at Broadmeadows after Easter, with cars on-sale May. 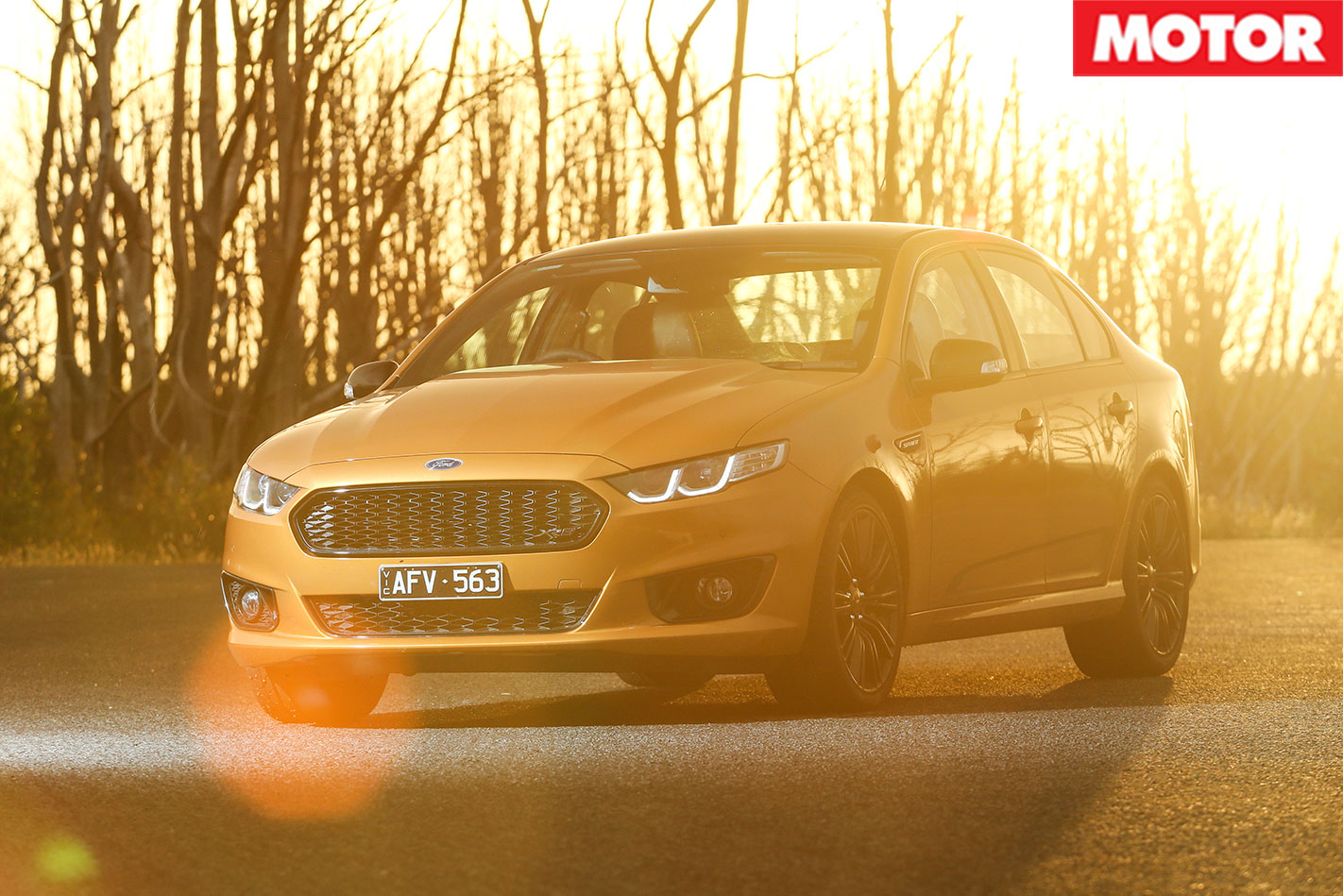 They plan to build 1400 Sprints - 850 XR8s and 550 Turbos - but, err, if you’ve got this far and you’ve mentally figured out you could afford one if you sold this or went without that, we’ve got some awkward news.

The XR6 is sold out, so is the XR8 manual, and there were just a “handful” of auto XR8s available as MOTOR went to press with this story. And who knows how long they’ll last.

Falcons selling left, right and centre - Ford doesn’t know what to do with itself. And so it should be the case: the XR8 Sprint will go down as one of the greats. 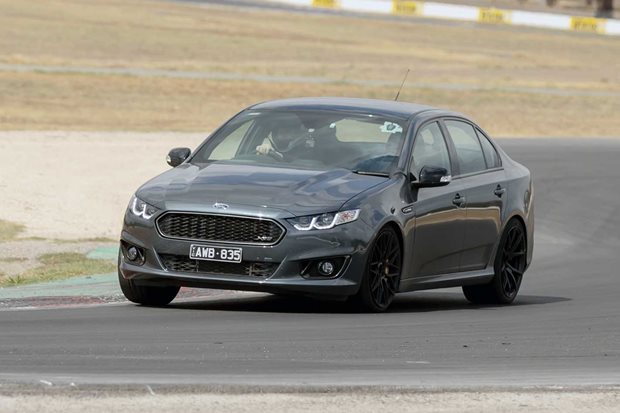 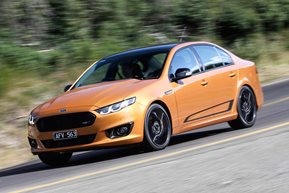