Infiniti has come up with a potential four-door retort to the likes of the Audi RS6, BMW M5, Jaguar XFR and Mercedes-Benz E63 AMG: the rapid Q50 Eau Rouge.

First unveiled in January as a styling concept, the four-wheel-drive performance saloon has since progressed into a road-going prototype and was being considered for low-volume production until .

The starting point for the fastest-ever production-based Infiniti is the standard Q50, although the changes clearly run deep. Infiniti’s designers have given it an added dose of visual aggression, including new F1-inspired carbonfibre bodywork at the front and rear, extra cooling and twin exhaust pipes. 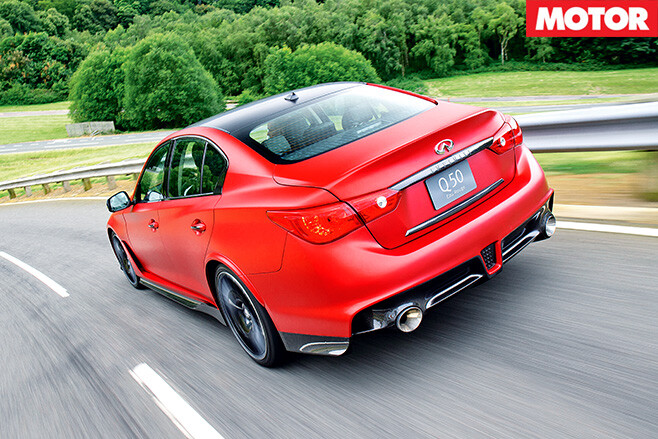 To provide the necessary firepower to see it challenge its keener performance saloon rivals, Infiniti’s engineering brains have looked beyond the standard Q50 S’s 3.7-litre V6 petrol engine; taking its place is the highly capable twin-turbo 3.8-litre V6 powerplant from the Nissan GT-R, modified to fit the Q50’s tighter engine bay. It gets bespoke mapping to endow the Eau Rouge with a stout 418kW and 600Nm.

The heady reserves are currently sent to all four wheels via a modified version of Infiniti’s six-speed automatic gearbox.

Underneath the skin – a mixture of steel, aluminium and carbonfibre – is a largely unique chassis. The changes include 100mm-wider tracks and lower ride heights (down 15mm up front and 20mm at the rear).

Further changes include special lightweight components, larger front and rear anti-roll bars and firmer springs and dampers, while a set of 20-inch wheels shod with a set of sticky 255/35 Pirelli P Zero Corsa tyres reside underneath the widened wings, adding to the assertive appearance. It is still very early days for the Q50 Eau Rouge, but its potential is already clear, as a handful of laps on Millbrook’s demanding Hill Circuit confirm.

From the outset, it is the engine that steals the show. The retuned GT-R
3.8-litre V6 powerplant endows the Q50 Eau Rouge with serious pace – enough to challenge its German rivals in a straight line.

With a four-wheel drive system providing impressive levels of traction off the line, the Q50 launches with great bravado and delivers huge on-boost in-gear shove on a pegged throttle. 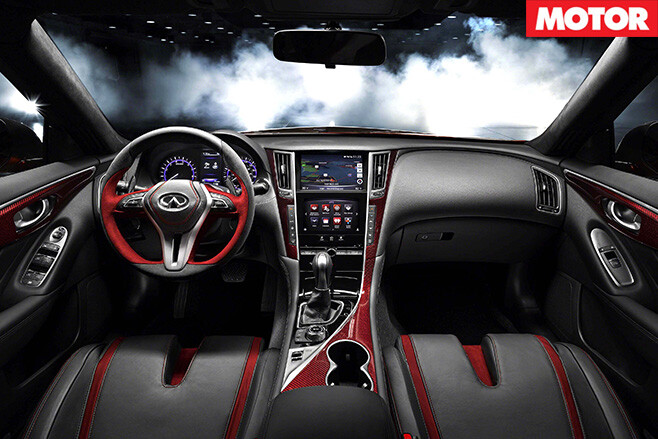 Inevitably, though, there are areas that require further fettling before you could describe it as being fully fit for the showroom. Throttle response is tardy at the lower end of the rev range, for example, which Infiniti argues is more to do with the fact that it has been forced to reduce the torque loading of the engine to suit the gearbox. Alternatives are under consideration.

The electro-mechanical steering is encouragingly direct, conspicuously quick and nicely weighted. There are enthusiastic turn-in traits, and with quite a bit of initial front-end bite, it manages to carry an impressive amount of speed up to the apex.

Infiniti has tuned the Q50 Eau Rouge’s four-wheel drive system to provide a nominal 50/50 drive split front-to-rear, in a move aimed at achieving neutral handling characteristics. It is very impressive in high-speed corners. 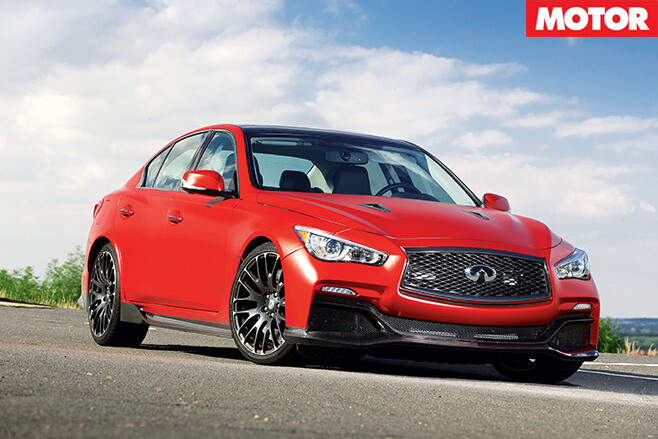 Taut damping and anti-roll bars help provide great body control, and there is plenty of purchase from those sticky Pirellis once you’re committed. However, there is some understeer if you really push.

Sadly, the Q50 Eau Rouge will never hit the public road, Infiniti syaing the numbers just don't add up for a production version. It's a great shame, as the vital ingredients of what promised to be quite a special performance car were already pretty much in place.