The Jaguar F-Pace fuses performance and exceptional design in its new family-friendly, yet driver-focused SUV, without compromising its traditional car-making principles.

WHAT IS IT?
This is the very first Jaguar SUV, aimed squarely at people who want to have cake and eat it. The British brand is capitalising on its sports car heritage with a mass-appeal SUV that promises practicality and driver enjoyment.

WHY ARE WE TESTING IT?
F-Pace is likely to be Jaguar’s best seller by a hefty margin, and responsible for bringing in a huge percentage of first-time Jaguar owners. This is our first drive of F-Pace in Australia. THE WHEELS VERDICT
F-Pace integrates standout design with practicality and real performance credibility. It achieves what Jaguar set out to do, which is to package a dynamically capable and driver-focussed car in a family-friendly body style. And it’s still a Jaguar.

THE WHEELS REVIEW
Jaguar’s first SUV is billed as the practical car for people who love driving, and over at Jaguar the Kool-Aid is all gone. F-Pace certainly has the credentials to back up the claim, being built on the same architecture as the accomplished Jaguar XE with an all-aluminium framework that should place it amongst the best handling mid-size SUVs. Behind a bluff fascia and sleek, ridged bonnet hides one of three engine choices in Aussie variants. F-Pace Prestige 20d opens the batting at $74,340 with a 132kW/430Nm 2.0-litre turbo-diesel four-cylinder engine. Above that sits a 221kW/700Nm 3.0-litre turbo-diesel dubbed 30d, and a range-topping 3.0-litre supercharged petrol V6 known as 35t.

Diesels are where the sales majority will likely come from long term, and both the 2.0-litre four and 3.0-litre V6 earn their keep. The economical, four-pot Ingenium engine (5.3L/100km) lacks take-off urgency but carries speed easily. The creamy and refined V6 surges with a supercar-rivalling 700Nm of torque and drinks just 6.0L/100km. Yet it’s with the supercharged petrol V6 that the bulk of F-Pace’s performance credibility lies. It’s a brute of an engine, especially in 280kW trim, and generates a raucous intake growl at the upper reaches of engine speed. The rush of air is accompanied by an aggro exhaust bark that’s more audible from outside the car than inside – why must the driver miss out on the theatre?

Beyond the bonnet and laid back windscreen, every styling element has been penned for visual speed. It's the work of renowned British designer Ian Callum who gave F-Pace the dimensions he thought a Jaguar SUV should have. Its size sits between BMW X3 and X5, outside the mould of existing SUVs. Eyes are drawn to its exaggerated proportions that herald the litheness and athleticism Jaguar’s engineers have sought to instil underneath.

It’s in the steering where they’ve had the most success – arguably F-Pace’s standout quality. It’s quick and accurate, almost in need of more weight considering how direct the front end is. The rear-biased AWD system (standard in all Aussie-delivered models) has colossal grip. In slippery conditions it sends up to 50 percent of grunt to the front wheels within 1/10sec. F-Pace strikes the right balance of ride and handling to meet its sports car brief. It hustles fluidly and makes no bones about its plus-size frame. Adaptive dampers fitted standard to S and First Edition models (optional on all others) are stiffened in Dynamic mode, becoming a touch too sensitive for roads collaged with potholes, especially riding on any of the 22-inch wheel and tyre packages. The trade-off is controlled body roll and a legitimately dexterous SUV that pivots through loaded-up corners within striking distance of Porsche Macan agility levels.

Dynamic mode also sharpens throttle and steering immediacy to the brink of twitchiness. It is as input-responsive and driver-focussed as promised. Comfort mode is the easiest to live with point-to-point, and models without adaptive suspension have a firm single tune that treads the middle ground. At speed, F-Pace maintains stability and composure for a feeling that is quintessentially Jaguar. Brakes have good initial bite and a progressive pedal feel.

All models use an eight-speed torque convertor auto that effects seamless shifts in most situations. Switch the transmission to Sport and it can hold a gear to redline if you ask it, but comes slightly undone on twisty sections of constant on/off throttle applications. Paddle shifters on the steering wheel are the more engaging and effective option when really going for it. 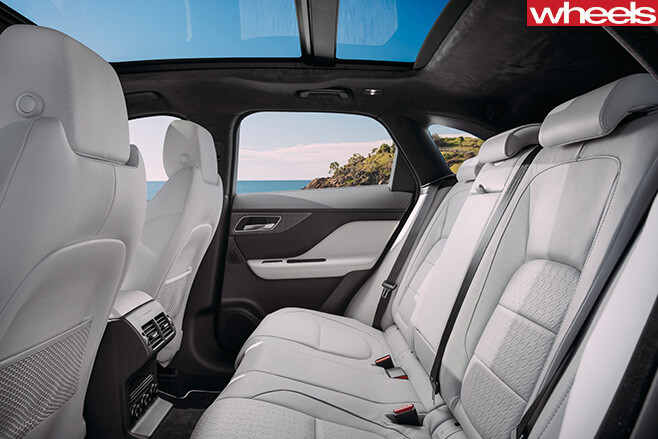 The interior is one of Jaguar’s best styling efforts of late, featuring the ‘Riva Hoop’ wrap around design linking the front doors and dashboard. Certain grades are heavy on plastic and don’t feel as premium as one might expect. It’s only after ticking a few of the myriad option boxes that you net the full F-Pace experience. A premium infotainment package with 10.2-inch widescreen display and a fully digital instrument cluster (think Audi Q7) is one of the most desirable additions.

It’s not without eccentric ergonomics inside, like quasi Land Rover window switches on top of the doors and memory position buttons where the switches should be, but there isn't a Jag on sale with everything in the right place and fans will argue this is part of the charm.

Aussie F-Pace models miss out on the class-leading 650-litre boot of overseas, making do with 508-litres and a space saver spare taking up the rest. It's not top of the pops but the layout is packaged well enough to cope with plenty of cargo and uphold Jaguar’s practicality claims.

To nit-pick, road noise in the cabin can be an issue. It's less severe on the smallest, 19-inch wheels but still tiresome on long hauls. Passengers in the back have good knee and head room, USB ports and 12V sockets, but four-zone air-con and reclining rear seats are – like many things – optional.

Jaguar earnestly believes its SUV should share the same stage as its halo coupe, the Jaguar F-Type, and it turns out that’s closer to the truth than it may sound. This first foray into a lucrative segment doesn’t compromise on brand values. It is still very much a Jaguar.