Fancy yourself for the Bathurst 12 Hour? Prove it

It is more like the Sydney Motorsport Park 12 Minute than the Bathurst 12 Hour, but a handful of laps in an endurance racing machine like the Mercedes-AMG GT3 is what you call a tick on the bucket-seat list.

Mercedes-Benz Australia recently added a pair of the FIA-grade weapons to its driving academy fleet, creating a drive-it-before-you-die opportunity for customers with $4500 to hand. The difference between the Mercedes-AMG GT S supercar and the GT3 Le Mans 24 Hour racer is midday and midnight.

A GT3 will cost a privateer racer about double the $295,000 Mercedes charges for a GT S. It keeps the road car’s aluminium chassis but sheds the aluminium bodywork for an exterior made from carbon fibre. 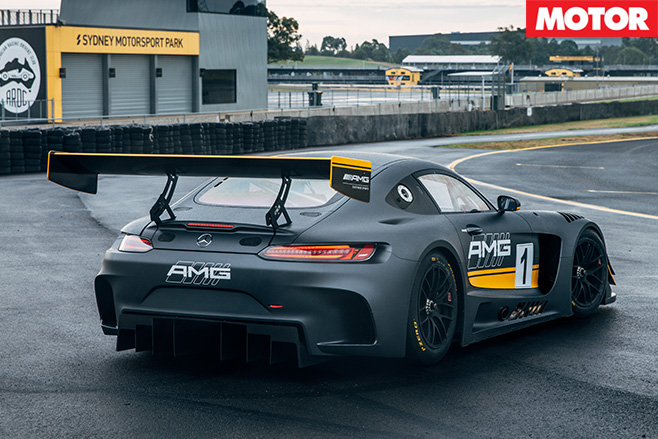 The sports car’s shape is retained. But with its lowered, widened stance and a rear wing Boeing would be proud of, the GT3 wouldn’t look out of place patrolling the dystopian streets of Gotham.

You don’t just step into a GT3 car. Awkward twisting of torso and lower limbs is required to squeeze past the steel roll-cage tubing before you can be swallowed by a carbon seat that redefines ‘bolstering’.

An array of buttons, dials and switches – which include adjustable ABS and traction control settings – are assembled relatively tidily on the carbon dash and centre console. Essential information is provided on a slab of digitised numbers directly ahead of the driver. 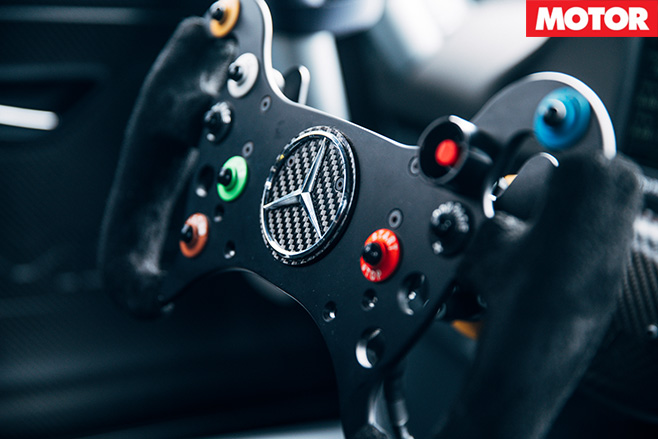 A detachable steering device – its shape resists the description ‘wheel’ – slots in last. Pressing a red Start/Stop button cues a whirr from the starter motor, momentary coughs, and then a crackle from the side-pipes as the 6.2-litre V8 fires.

That’s not a misprint. The GT3 ignores its donor’s twin-turbo 4.0-litre for the normally aspirated unit that has proven its durability over five years in the race-winning SLS GT3. That reduces costs for clients from a servicing schedule that requires an engine rebuild after 22,500km (about two 24-hour races).

Clunking towards the pitlane exit at just 40km/h, the GT3 sounds more fragile than it really is, the pit-limiter acting like a leash on a rabid dog. 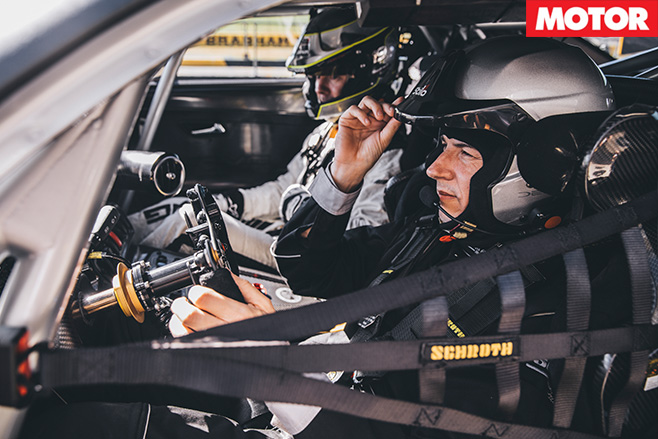 A guard on the left edge of the brake pedal is designed to prevent the driver from accidentally pressing the clutch pedal (because that’s used only for getting the GT3 underway), making left-foot braking obligatory. You also need to push deeper on the brake pedal than you expect, to bypass an initial dead zone.

Once there, you’re grateful for the HANS device keeping your helmeted head in check as the GT3 scrubs speed with brutal authority. Response to the throttle pedal is more linear – making it a perfect match for the V8’s progressive, and raucous, delivery.

Power and torque are reduced about five per cent thanks to air restrictors required by Balance of Performance rules, which attempt to level a field that can include Astons, Bentleys, Ferraris and Porsches. 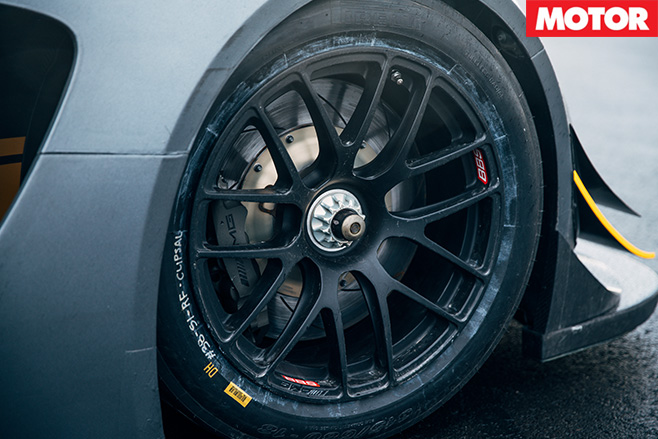 That still leaves you with about 400kW propelling a kerb weight of circa-1300kg – about 350kg under that of a GT S – so it’s no hindrance to urgent acceleration. But reaching 250km/h on the straight doesn’t feel special. The gee-whiz comes with the grip through fast sweepers.

Turn in with the staggeringly responsive steering, and downforce – generated by the front splitter, that wing, and a honed underbody that blends into a huge rear diffuser – loads tyres that draw the matt-grey monster to apexes like a Dyson sucking in carpet fluff. This at speeds where a C63 S driven earlier started to understeer. 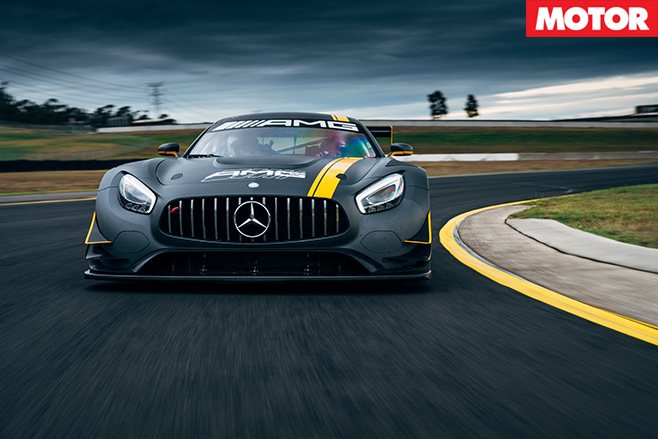 Aerodynamics are less in play in slow corners, where fast-pedal patience is still vital to avoid spinning the ridiculously fat, groove-less rear rubber. But even for amateur racing drivers, this really is an easy car to drive fast. 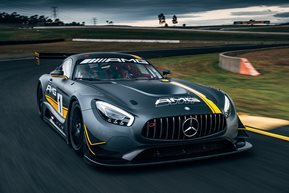