Morley’s all-too-freely-available views on the subject notwithstanding, my decades of dabbling in automotive journalism have not left me totally ignorant of its protocols.

Okay, analysing steering feel whilst cresting Mount Horrible on opposite lock may not be second nature yet but I’ve got a grip on most of the basics by now. Ergo, when invited to conduct a comparison test involving the new Mercedes-Maybach S600, I accept, naturally expecting another car to be involved.

So when, on the day, the proposed opponent fails to appear, leaving nothing whatsoever to judge the Maybach against, you can imagine my discomfort. Comparing half-a-million dollars worth of mogul-mover to public transport is hardly going to inspire a rush to the results page. 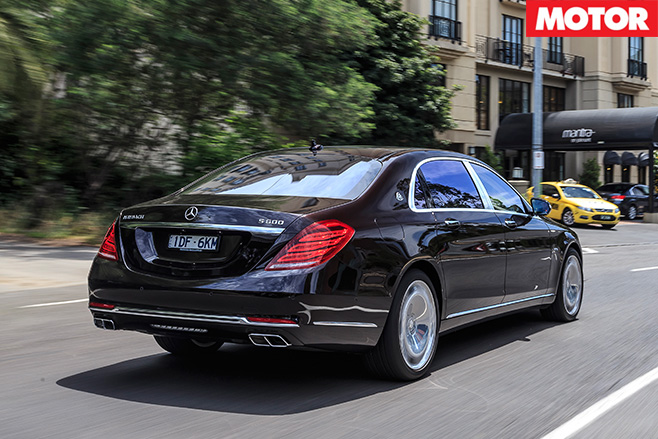 Alternatively, seven blank pages of write-your-own’s not likely to boost subscriptions either. But both Assoc. Ed. Scott Newman, gifting me with 2.4 tonnes of indulgence, and Ellen Dewar, poised to picture what I do with it, clearly expect I have something in mind.

So best to reassure them by beginning the examination with a calm confidence. Which disappears damn near immediately. Because this car renders virtually every preconception irrelevant. For instance, the very first thing I learn is that the front seat is not the best it offers.

Oh sure, it’s swaddled in hide and sumptuous finishes, indulges you with heated armrests and massaging and seduces you to slumber with exotic agarwood fragrances gently swirling in an interior claimed to be the quietest in the automotive world. But want to go First Class? Try the rear! 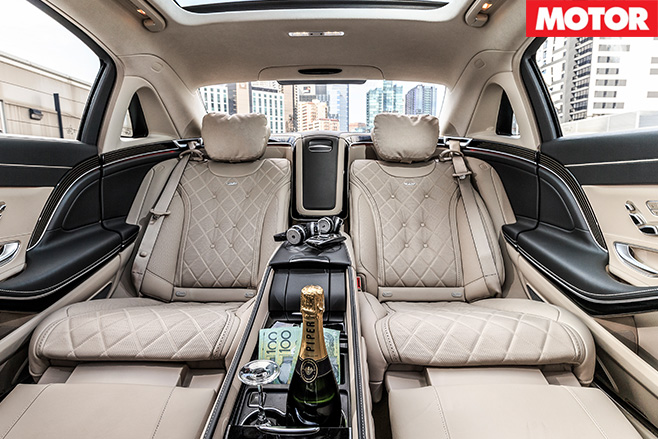 I’ve no idea what the accommodation in a private jet is like but I’m guessing some clues lie in Leatherland back here. Bathed in your choice of seven interior lighting hues, each of the rear seats are thrones, shaped by individual controls, luxuriously reclining with elevated footrests and down pillows. Lordy, even the seatbelts are silenced and padded.

A six-footer, I still don’t touch the front seat and the sating of every sense now awaits me. Soothed by a chilled glass of whatever appeals served in the optional sterling silver champagne flutes, each rear-seat occupant has their own media screen with remote-control and/or the eyes-closed indulgence of a Burmester 3-D surround-sound system that turns the car into a concert hall.

Everything from hot-stone massage to a tasting-tray set out on each pop-up table is an option now and suddenly, in that splendour of choice, comes the realisation that we really do have a comparison test to undertake today: choosing the ultimate Maybach experience – Driver or Passenger? 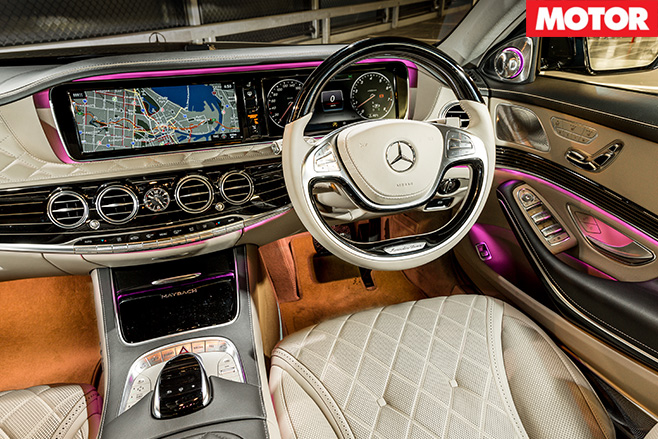 Accordingly, I rouse myself from horizontal heaven and, ever the slave to duty, take the helm. Not that stirring six litres of twin-turbo V12 to life is a complete drudge so limit the sympathy. However, another preconception swiftly fades.

Where I’d imagined such a specification would immediately inspire running zero-to-stiffies in a tumble of seconds, the exact opposite occurs. From the first moment, this Maybach arouses an entirely different ambition in its driver: to exploit a silence and refinement previously unknown and drive it with silken skill.

Apart from a first-gen WRX at the other end of the scale, this car shapes its driver like no other I’ve ever driven… and rewards concord with an almost surreal partnership. Driven fluidly, its bulk instantly falls away, replaced by control of almost every imaginable factor with spacecraft silence and fingertip sensitivity. And the span of those factors is equally impressive. 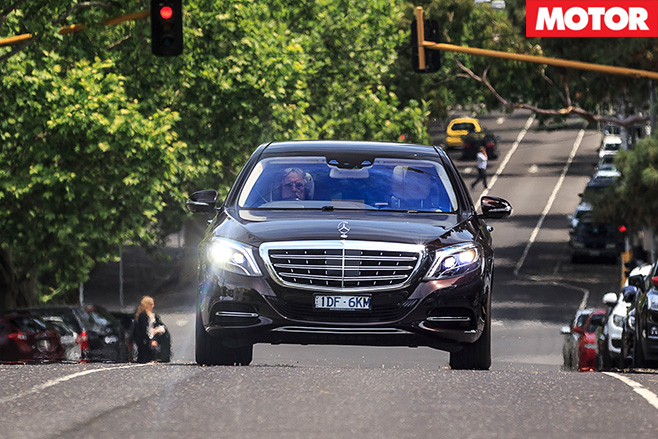 Though the handbook is a hefty tome, reading it would doubtless allow control of every facet imaginable – plus some well beyond expectation. But I’ve not the time to absorb it all today, so I happily settle for a selection from the massage menu as part of the research… Which comforts me into believing that, somewhere among the massive array of switches is the means of eradicating any shortfalls I might discover. All except the column-mounted gear selector inherited from lesser Mercs, which is easily confused with indicators and a bloody nuisance.

And, trust me, confusion is unwelcome when attempting a grand entrance in well-over 10 square metres of sheikh-shifter. Just parking it is akin to a mooring, and reinforcing that theme is Newman’s report that his first effort required four bays. Luckily, however, the quest for photo locations keeps us moving, and soaring down a motorway in the Maybach’s eerie silence is easily assumed by this driver to be further evidence of his mastery of the craft.

Okay, the tight schedule allows little research of roads beyond the motorway but I’m not sure that the reputation of either man or machine would be much enhanced by any cowboy corner-working. 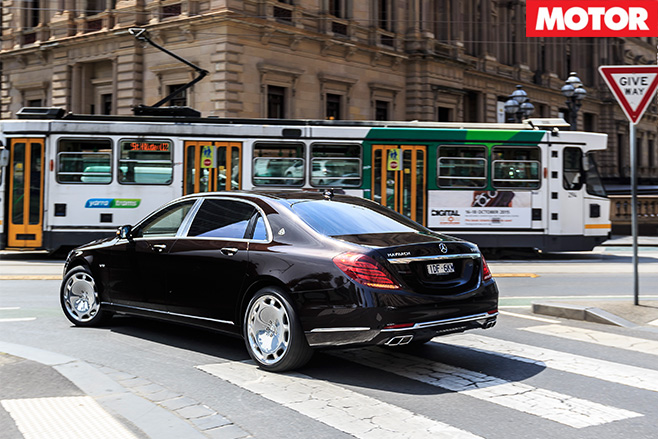 However, for all the civility fostered within me by this car, a distant calling from the past persists: I still want to know what happens when you floor its twin-turbo V12. And that curiosity gnaws until the road ahead briefly clears and, under the heading of ‘Just checking overtaking ability’, I nail it. And the 'love-verb' erupts from at least two of us.

In truth, as Newman points out, this genre, of all automotive categories, would be ideally suited to electric propulsion. Soundless, boundless torque would serve it perfectly. But it seems that when Rolls-Royce tested the concept it was a marketing flop. Crisis? What crisis? The target audience wants a V12. And if that likes a drink, well, so do they. And, after all this, so do I.

So back to exploring the passenger possibilities, and the deeper you look, the more the details impress. Softly-closing doors automatically latch themselves and, reclining beneath the panoramic sunroof, one savours the gentle scenting within a ventilation regime that is a wholly atmospheric affair rather than simply a foot-and-face blast. Even the symphony system is blessed with exquisite detail such as tweeters that sweetly pop out and rotate when in play. 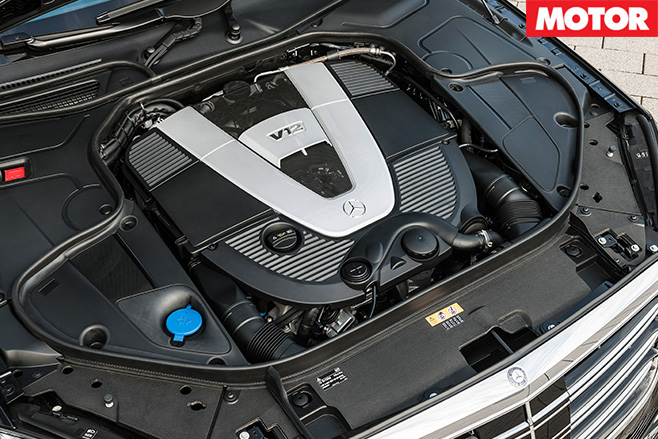 In transit breaks between photo locations I am joined in my research by Photographer Dewar, a welcome development as she promises to provide the female view, regrettably all too often overlooked in the (foolishly) male-dominated world of automotive design. And she initially rewards the opportunity by noting details such as the rear-seat make-up facility, apparently a triumph of design for the user.

“Yes, it’s wonderful,” she says, “it’s lit with adjustable lighting on me and also in front of the mirror and I can see my entire face to put my makeup on”. All of which can be done from the reclining position, she also notes, before ruminating on that latter thought just a little too long and compromising the culture of proceedings with: “But you couldn’t throw a leg over easily back here.”

Whether that reflects a failing of car or critic we need not ponder at this time, for there are surely more profound issues to be covered in this comparison. Not least the entirely unexpected one gradually revealed today in the isolation of this rear sanctuary: that there is a third contender. 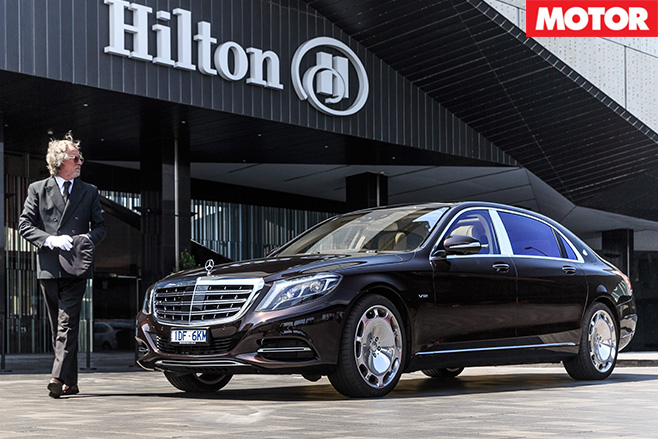 Because, uniquely, in this exotic class of car, there is another – and greater – pleasure to be found in the Mercedes-Maybach S600 than being either its driver or passenger. Owning it.

Some of the reasons for that, of course, are obvious. The owner can choose to wind it up or wind themselves down and both are profoundly satisfying. And, ipso facto, almost certainly the owner of this car will be less troubled by its expenses than the average family car buyer. But there is another factor at play here: this is a car designed to be enjoyed beyond mere contact. Because its purpose transcends simply functioning well.

The aim of this car – and the designers and craftsmen responsible for it – is excellence beyond compromise. And, for the owner, knowing that is a pleasure beyond merely experiencing it. As a very small and very lucky group of people in Australia are about to discover. 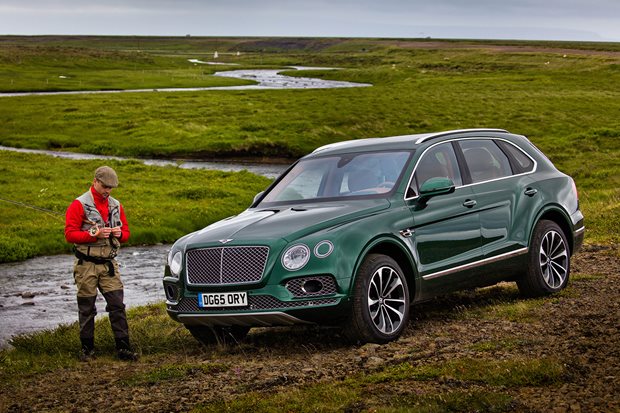 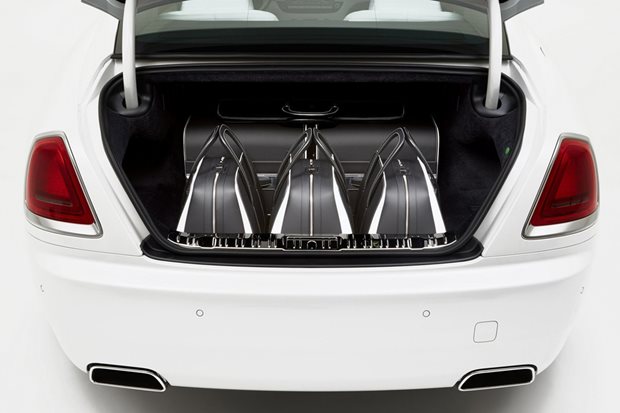 Rolls-Royce has released a six-piece luggage set that is inspired by the company’s Wraith coupe and is priced to turn most buyers white. 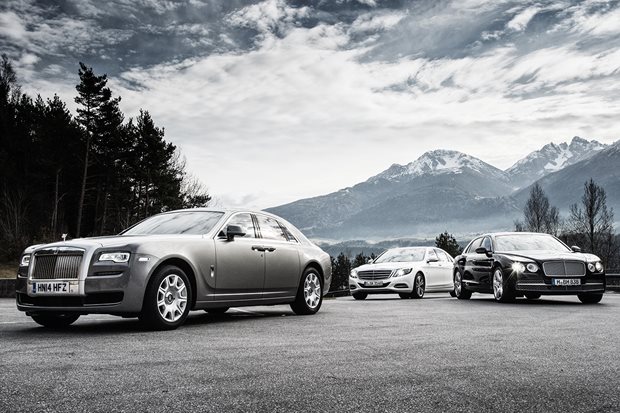 When that rich relo carks it, you’ll want something big, regal and rapid. 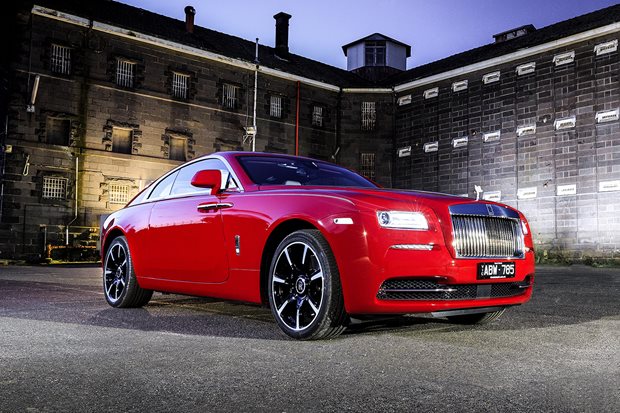 With power to embarrass most muscle cars, we get spooked by the 465kW Wraith – a Rolls-Royce that will haunt your licence 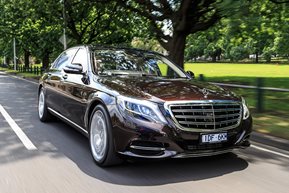