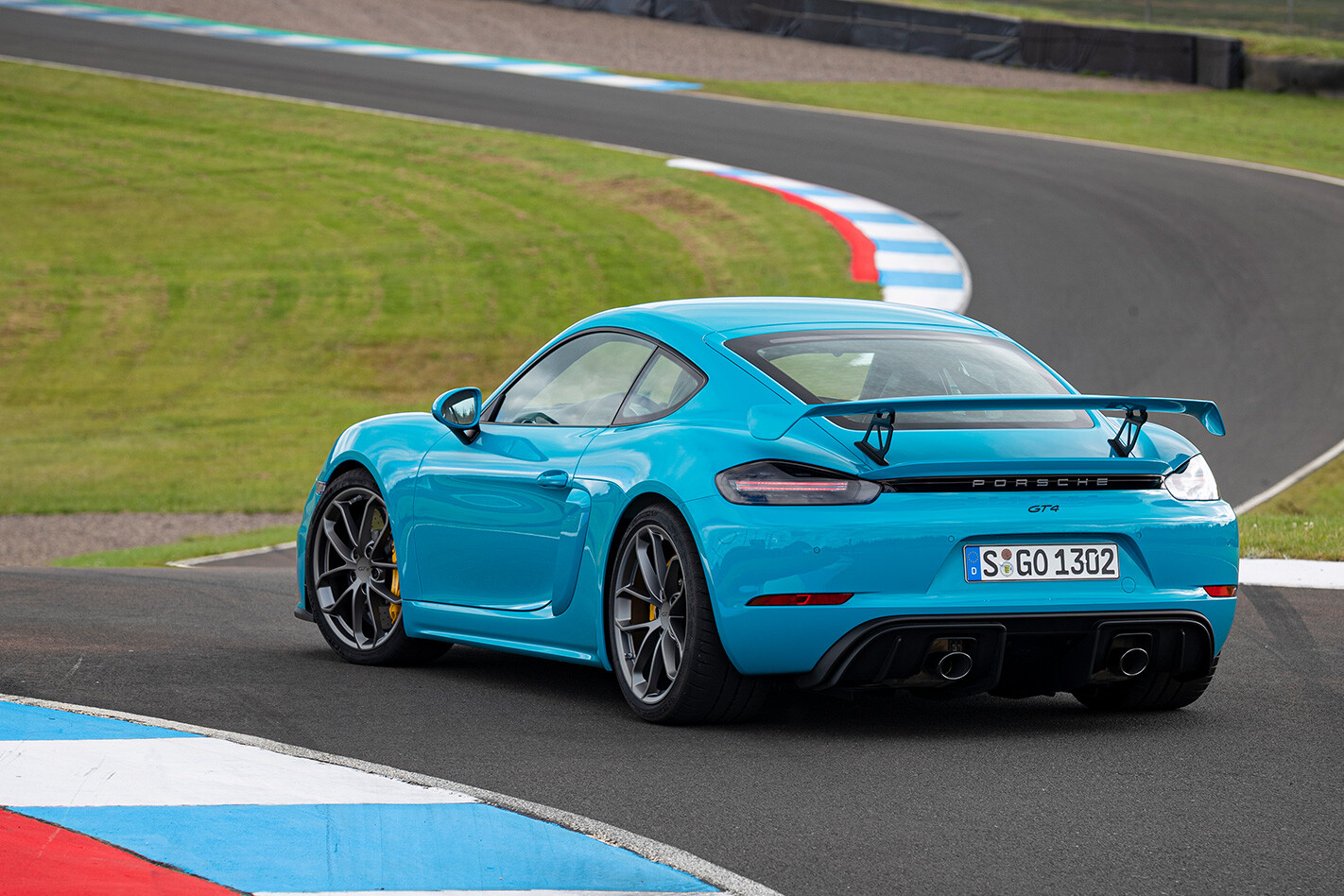 What is the Porsche Cayman GT4?

It’s Porsche’s second-tilt at its entry-level GT car. This time around the GT4 scores an all-new 4.0-litre engine, 50 percent more downforce, and, eventually, the promise of a 7-speed dual-clutch transmission.

Because the first Cayman GT4 was an absolute peach. Balanced, tactile and rewarding, it was so convincing that many wondered if you actually needed to stretch to a GT3. Improving on that high water mark mustn’t have been easy, so we flew to Scotland to see if Porsche has raised the bar.

MARK WEBBER has made a mistake. He must have done. Sawing away at the wheel as our Cayman GT4 flip-flops through the tricky blind chicane at Knockhill circuit in Scotland, Webber’s internal calculation of our trajectory and the remaining road has clearly typed in 2+2 and come up with five. Wedged in the passenger seat like a useless sack of potatoes, I brace for the seemingly inevitable sojourn onto the grass. It never arrives. With the finesse of a concert pianist, Webber brushes the brakes to trim our line, the GT4’s left-side tyres running to the edge of the exit kerb with millimetre perfection. You can do that in this car, I’m soon to discover. Accuracy is a Cayman GT4 character trait.

Porsche had an unexpected cult hero on its hands with the old Cayman GT4. It might have been the ‘entry-level’ GT car, but for many, its mid-engine/manual-only recipe made it just as desirable as a GT3 or a GT2 RS.

Ensuring this second-gen car eclipsed that high benchmark can’t have been an easy task. For a while, there was talk that Porsche would gift the GT4 the screaming 4.0-litre flat-six from the GT3, but it wouldn’t fit. Plus, the head of Porsche’s GT Division, Andreas Preuninger, says it would have made it impossible to meet the GT4’s $220K price point.

“In the GT3 we have one of the most expensive engines in the automotive market ,” he told us. “That really is a motorsport engine, with titanium components.”

So Porsche decided to build a new engine for the GT4. Also 4.0 litres in capacity, it’s based on the 92A 3.0-litre donk found in the 992 911, though nearly all of the external components (cylinder head, valve train, crankcase, intake manifold) are new. It took four years to develop and encouragingly, the man in charge of the engine, Markus Baumann, says 9000rpm+ is possible and that “there’s a lot of room” to create more power.

Still, this first hit-out is hardly limp wristed. Outputs are healthy at 309kW/420Nm, the rev-limit is set at 8000rpm, and when you drive it on the public road, the first impression is one of cultured smoothness. And of low-down muscle. The risk in this turbocharged age is that atmo engines start to feel light-on low in the rev range, but that’s a trap the GT4 neatly sidesteps. Peak torque (which is exactly the same as the old GT4) arrives between 5000-6800rpm, though there’s ample flexibility below that and a willingness to pull cleanly from as low as 1500rpm.

The engine is clever too. Cylinder deactivation sees it drop to a single bank on light throttle openings for an 11 percent efficiency gain, with the engine swapping seamlessly between each bank every 20 seconds to equalise temperatures in the catalytic converters.

The only downside to this is a bassy resonance that booms in the cabin when the system is active, though it can be switched off by pressing the stop/start button on the centre console.

As before, the sole gearbox on offer at launch is a six-speed manual (Preuninger confirmed a seven-speed dual-clutch is coming), though pairing it with the new 4.0-litre has helped address the chief criticism of the old car – namely that its gear ratios were too long.

They still are, actually (“The ratios are identical in this new car,” says Preuninger. “We needed them for emissions), though this GT4’s gutsier engine does see it punch through each ratio with greater urgency.

Which brings us to the chassis. The basic layout hasn’t changed. The front suspension is lifted largely from the GT3, while both axles have three-way adjustable rollbars and the option to tweak the ride-height, toe and camber.

Drive it hard and the overriding sensation is one of balance. Knockhill is a busy little circuit, though the GT4 never feels rushed or ragged. It flows beautifully, with vicelike body control and steering that’s reassuringly weighted and accurate. Grip from the 20-inch Michelin Pilot Sport Cup 2s is mighty - helped in part by a 50 percent improvement in downforce - though the GT4 never feels locked down or inert. It remains a car that gives its driver options; one that responds positively to adjustments to steering, brake or throttle.

It’s a tactile experience, driving a GT4. An auto-blip function will rev-match every downshift perfectly, though it’s arguably more rewarding to do it yourself as you delve deep into the standard steel brakes (410mm ceramic stoppers are an option) and relish in the ideal pedal placement. The shift action is a highlight. The stick itself is 30mm shorter than a regular Cayman’s and the shift quality is nigh-on perfect.

Interestingly, both the GT4 and its new 718 Spyder sibling now share identical chassis set-ups. Their spring and damper rates are the same, and despite riding on suspension that’s also 30mm lower than the regular 718 range, the ride quality is outstanding. We only drove the Spyder on the public road (the GT4 was reserved for circuit use), and while the suspension does feel firm, especially at low speed, it’s never harsh or sudden. On bumpy Scottish B-roads, the two-stage adaptive dampers helped round the edges off all but the sharpest of imperfections. The high-speed ride is particularly impressive, lending the feeling that this is the most comfortable car Porsche’s GT division currently makes. The only NVH niggle are some vibrations that make their way through the seat and steering wheel at idle.

So it’s a remarkably polished thing, the GT4, and one with a distinctly different character to the rest of Porsche’s GT range. It’s never as raw or as visceral as a GT3, yet the GT4’s brilliance lies in the completeness of its package. It feels of a piece, as though its powertrain and chassis are locked in a perfect two-step that puts the sensation of driving front and centre. And as drivers, what else can we ask for?

Small-sized electric van close to production-spec, will be released before the end of 2021