Think of a Porsche 911. One that’s twin-turbocharged and rear-drive, with huge tyres. One that will sprint to 100 in a shade over four seconds and flat-out will see almost 300km/h.

You may be thinking 993 GT2, but this is the new entry-level 911 Carrera. It’s an extraordinary thing: the performance of a pulverising homologation special of the mid-1990s can now be matched by the most junior member of the family – and at half the cost. 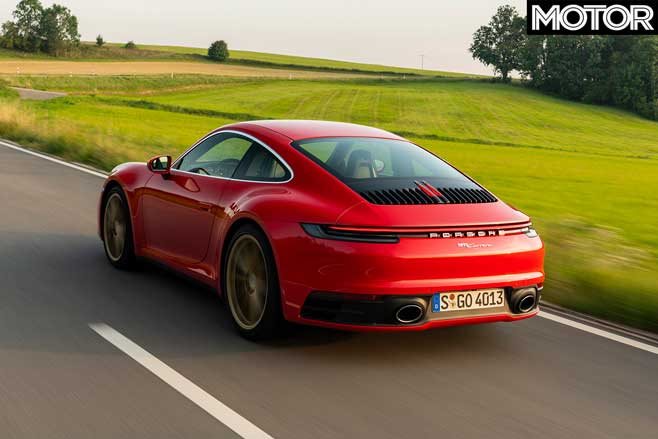 The 3.0-litre flat-six is detuned with smaller turbochargers and less boost. Power and torque are down (by 48kW and 80Nm), but the smaller turbos spool up quicker, practically eliminating lag and sharpening throttle response. Occasionally accompanied by a faint metallic yowl reminiscent of old 911s, the engine is phenomenally responsive, and the way it spins to the 7500rpm redline is relentless.

Porsche’s PDK gearbox also remains outstanding: shifts are cut-throat quick but effortlessly smooth. In short, the powertrain is excellent and, raw pace aside, more enjoyable than that of the Carrera S. What a coup.

Base 911s have often been among the sweetest to drive. Smaller wheels, narrower hips and softer suspension made them easier to place on the road and even more expressive in their handling, at least at realistic speeds. But this one gets the wider body previously reserved for S-badged variants and the 46mm-wider front track now matches that of the outgoing GT3. The 911 is now a large car. 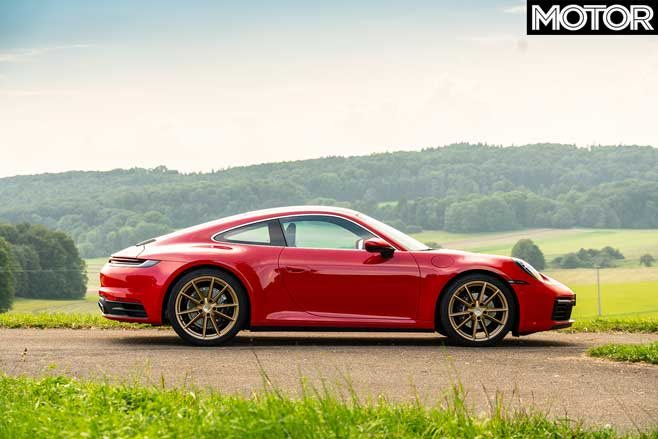 However, this is the way of the modern 911. And considering that almost two-thirds of the mass lurks behind the driver, they are freakishly composed. Porsche’s staggered wheel set-up pushes the balance point forward, and wherever you point the neat little 360mm steering wheel the car simply goes, effortlessly.

In every respect, the base model is just as impressive as every other 992 we’ve tested. Accurate, neutral, phenomenally quick. But the entry-level 911 doesn’t take itself as seriously.

The standard ride height makes it appear a little perched at standstill, at least compared to cars equipped with PASM Sport suspension (which is most of them), but the more generous travel introduces extra fluidity into the body movements on the move. 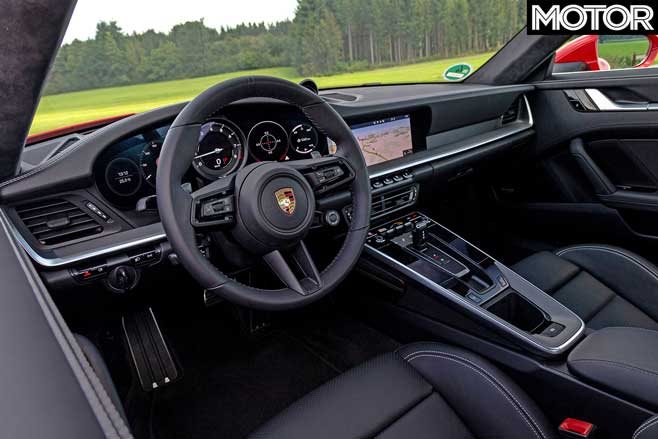 No longer do you need to pay a premium for the Carrera S. At no point does the less powerful car’s 283kW feel underwhelming. Supple, uncomplicated to drive, but at its core still a deadly serious sports car, this least expensive Carrera – $34,900 less than the Carrera S – is the best of the bunch to drive at eight or nine-tenths. And if you’re going any harder than that, you’re probably on track and need a GT3. Or a 993 GT2.

Cream of the crop at MOTOR 5 star cars 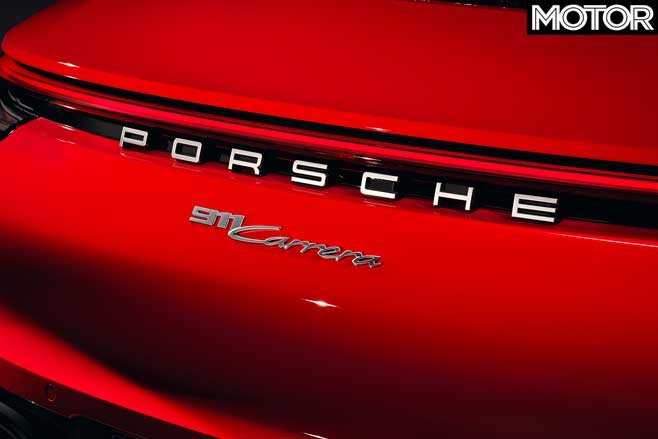 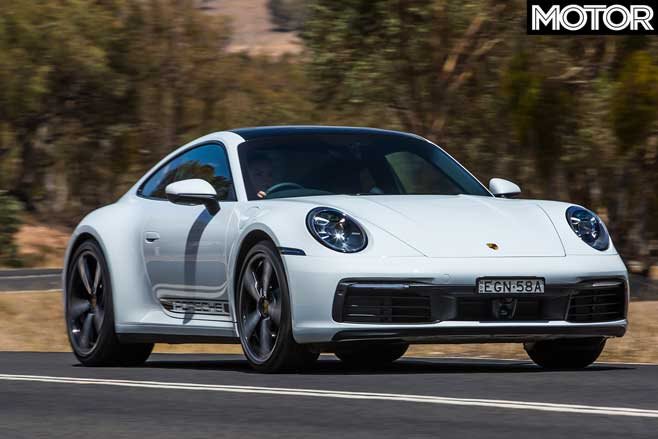 Gone are the days you bought the slightly slow one when you got the ‘base’ Porsche 911 Carrera. We know, because we just drove the new, 992 series around the Bathurst hinterland in New South Wales, and we’re a bit shocked how fast the thing is.

We’ll get to more of that shortly, but let’s quickly run through what’s new. For the new 992 the 911 has grown in overall dimensions yet again, now 20mm longer, 44mm wider but 5mm lower (all 911s now get the ‘widebody’ treatment).

Despite increased use of aluminium in its body (now 70 per cent), at 1505kg the base Carrera is 55kg heavier than its 991.2 equivalent. The wheelbase is the same but the front and rear tracks are a whopping 50mm and 39mm wider respectively, tyre widths unchanged. 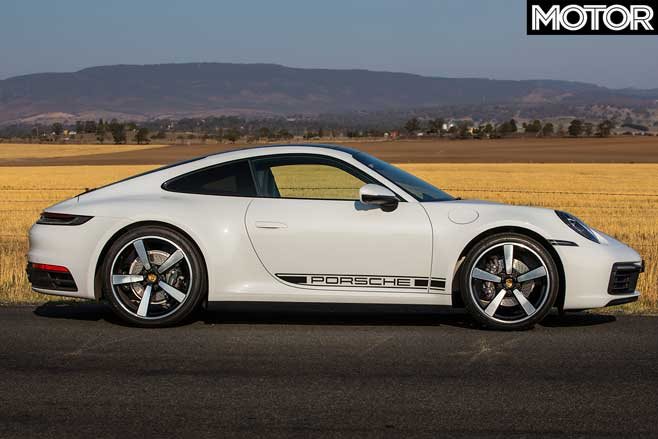 While Porsche says the 3.0-litre flat-six is a “new” engine the changes are better reflected in its name – 9A2 Evo. New turbos, exhaust manifolds and relocated intercoolers are among the numerous changes yielding an extra 11kW. Torque remains 450Nm.

Having familiarised yourself with the beautiful new, high-quality, higher tech and newly luxurious interior – with tasteful retro vibes like the new tacho face, needle, and dash design – there’s a more comfortable daily driver to discover in the 992. A bit quieter, a bit nicer riding, visibility remains very good in what is no longer a petite car. And get stuck in on a twisty road and the handling is, as you’d expect, sublime. 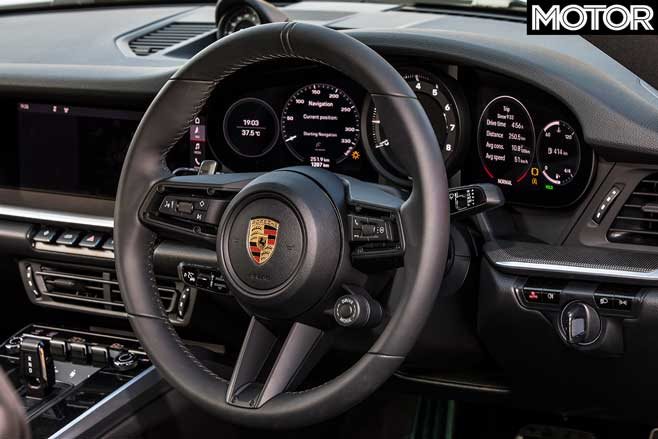 To drive the 911 Carrera hard is to become completely immersed in the experience. The acceleration, while noticeably not quite matching the kick of the S, is still wild; the 11 per cent quicker steering is pin-sharp and basically perfect; and maybe thanks to the significantly wider front track there is more front end grip available helping the overall balance.

Even though the front tyres remain 235-section (295mm rears), you don’t feel to have to drive on the brake into corners quite as much as you did 991.2. Understeer is a lot harder to create.

Communication abounds from the rear end and while traction is strong, a bit of delicious throttle-steer is available out of first- and second-gear corners if you want. All the controls, too, feel spot-on; the high speed-stability is incredible; and the PDK is somehow seamlessly smooth and razor-sharp at the same time, and feels very German-engineered.

Err, yep, the base Carrera is pretty damn excellent. 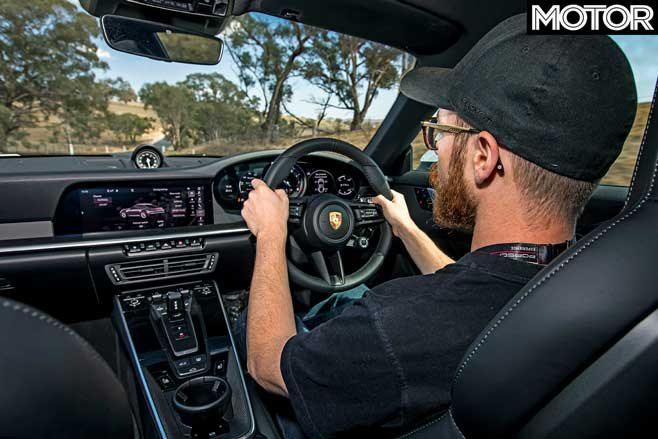 Like many modern sports cars there’s a huge amount of power rocketing you along, and a lot of grip and braking to support it, but it is too hard to safely explore the car’s very high limits on the road. If you buy a base 911 you must take it to the track or you might never know half the car you’ve purchased.

Meanwhile the engine is one of the best, most complete turbocharged performance engines ever developed. It idles with a subdued, almost air-cooled dak-dakness but there are tame notes of GT2 RS in the exhaust as well.

Flatten the throttle and from 1950rpm the maximum 450Nm torque arrives strongly but not overly aggressively; and from there the engine revs keenly, linearly and without running out of puff to its fairly lofty 7500rpm limiter. All the while crescendoing to a loud, rich flat-six sound that certainly satisfies. In the transition from 991.2 to 992 the engine has very much found its voice. 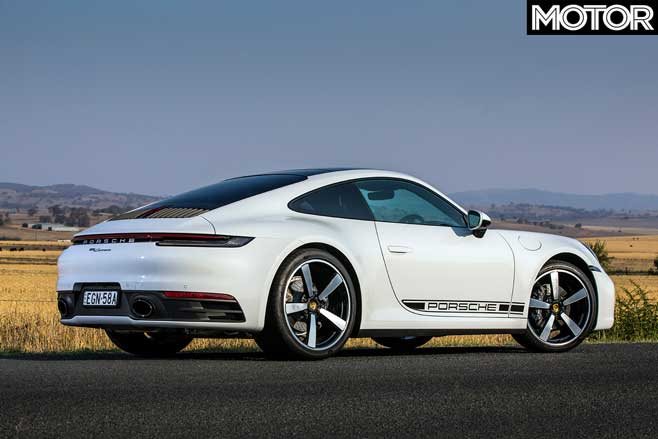 The base Carrera is not flawless; the ride quality has significantly improved but this is still obviously a sports car underneath. And while it’s overall a much nicer and easier car to operate, Porsche has also made some weird ergonomic decisions with 992, like the electronic pop-out door handles which compromise usability for styling.

If you slapped an aggressive bodykit on the 992 base Carrera and some Turbo badges, though, it’d be fast enough to convince someone from 2002 who just woke up from a coma that it was latest 911 Turbo. Yet this is the baby one. It’s almost unimaginable what the actual 992 Turbo will be like, yet next month it will be our reality. 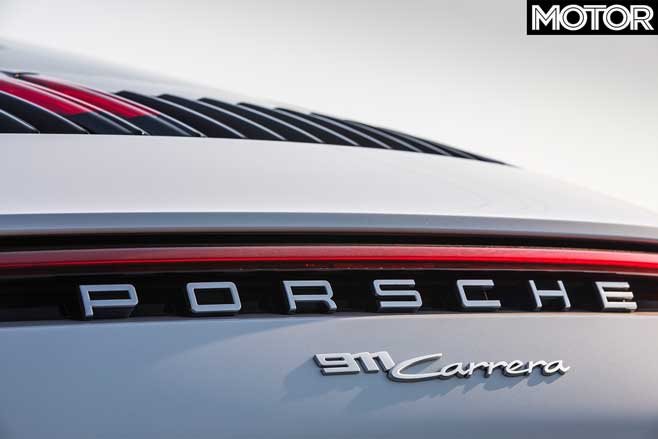 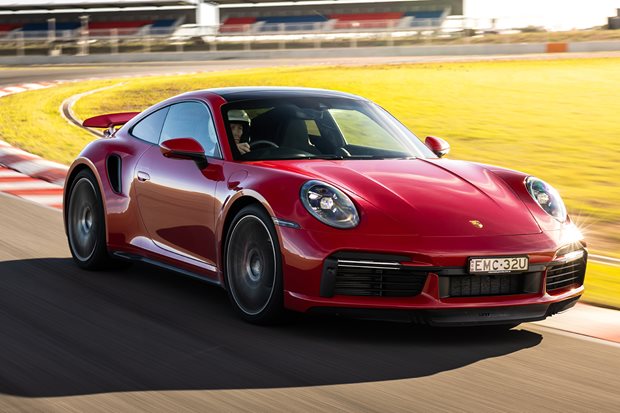 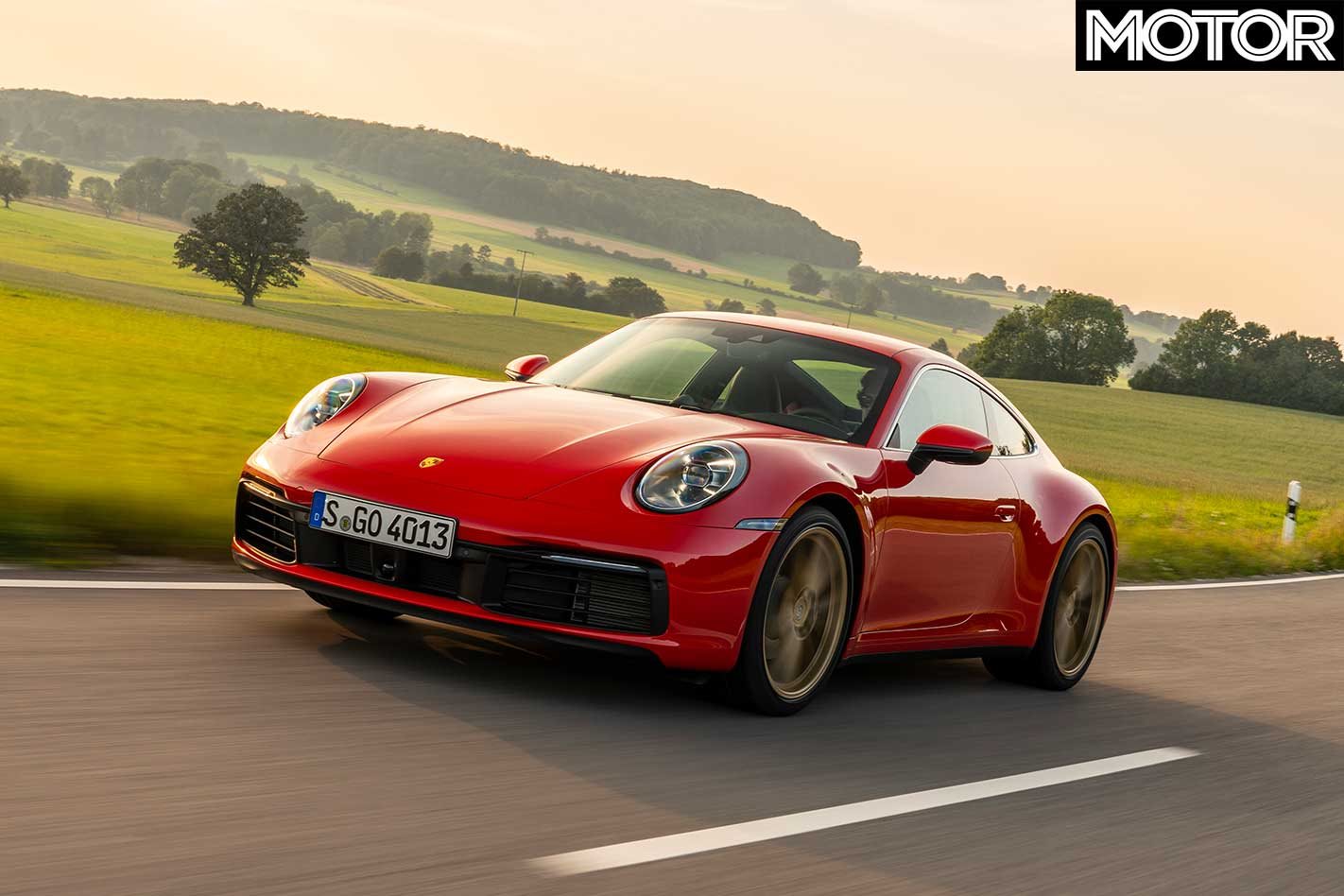 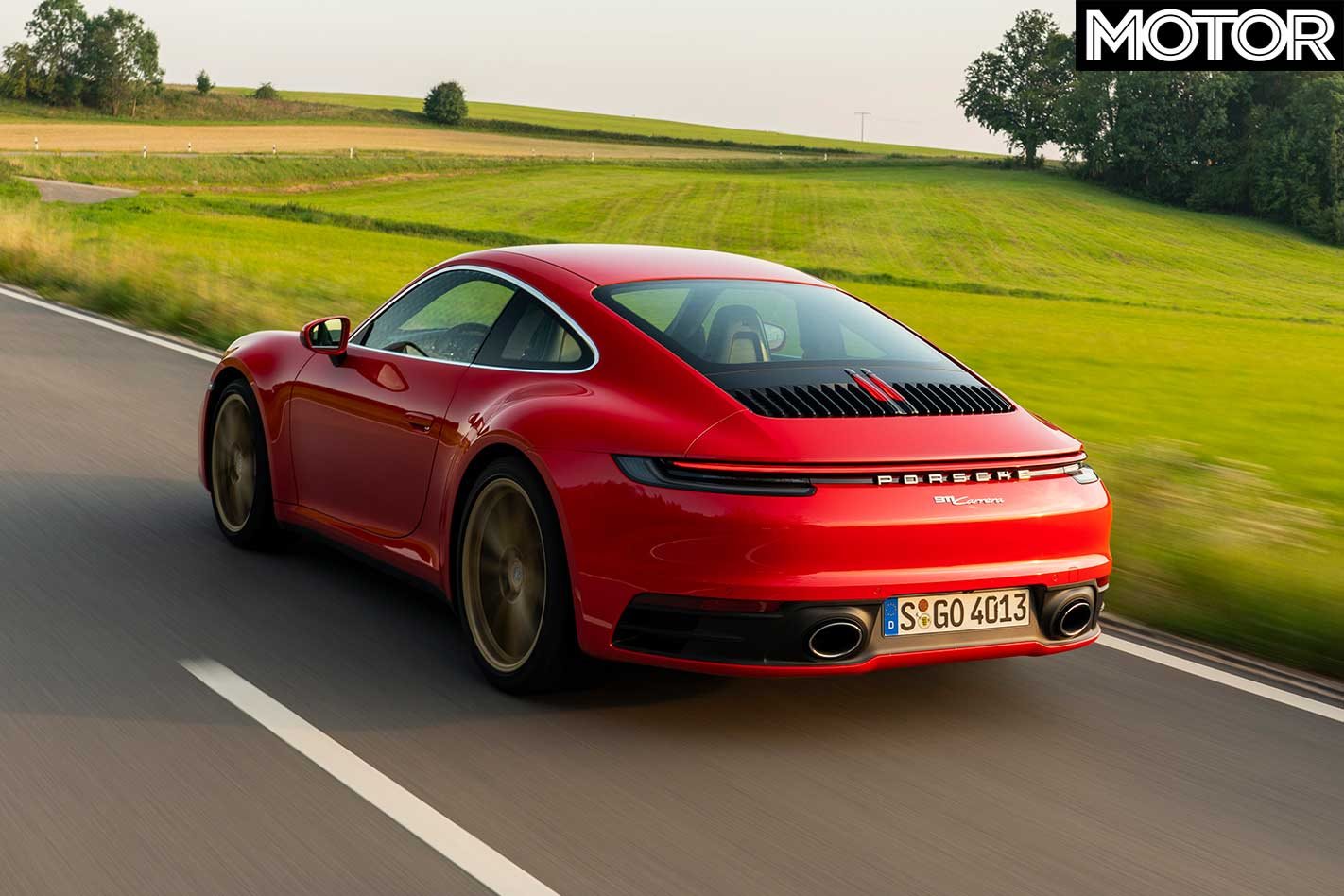 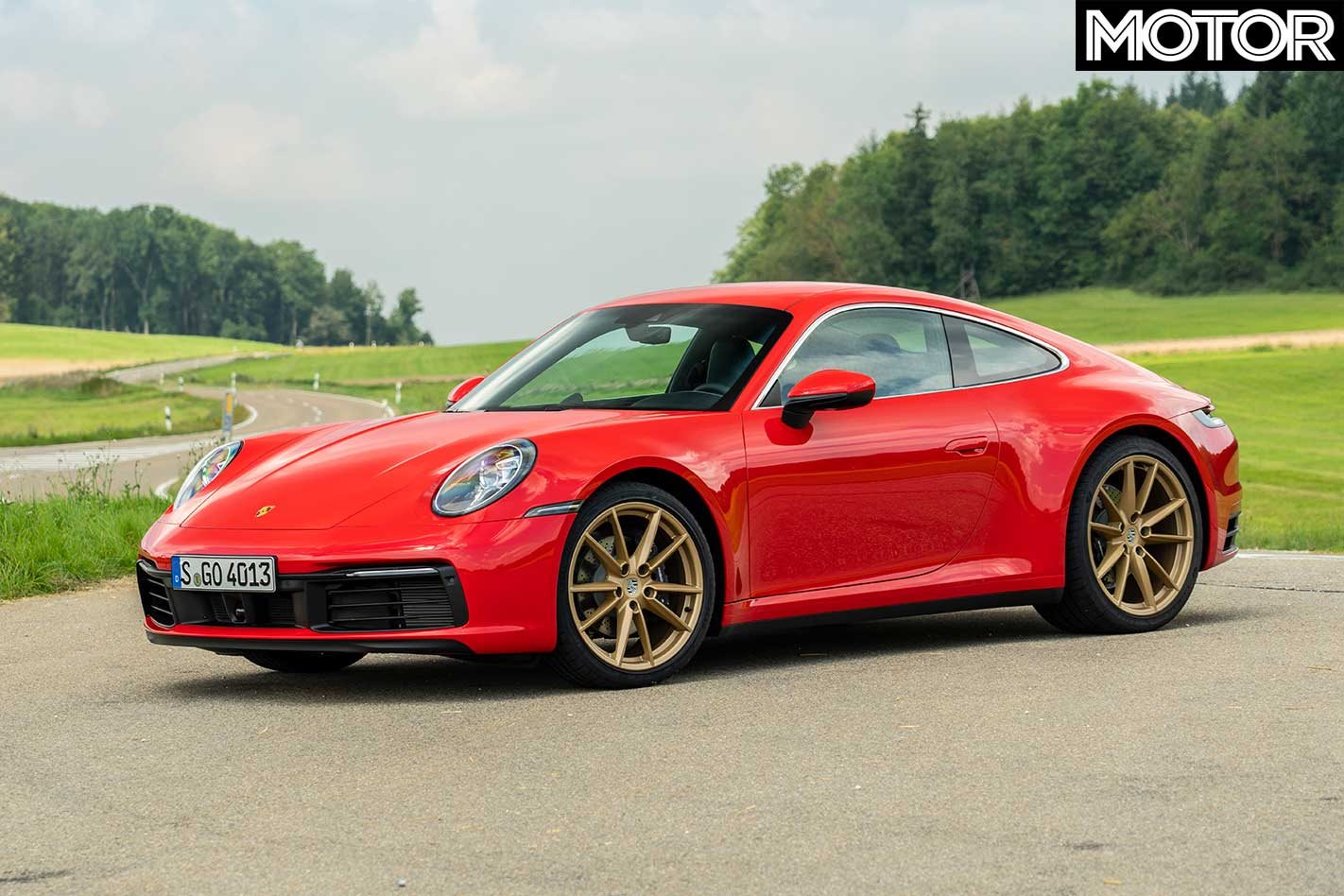 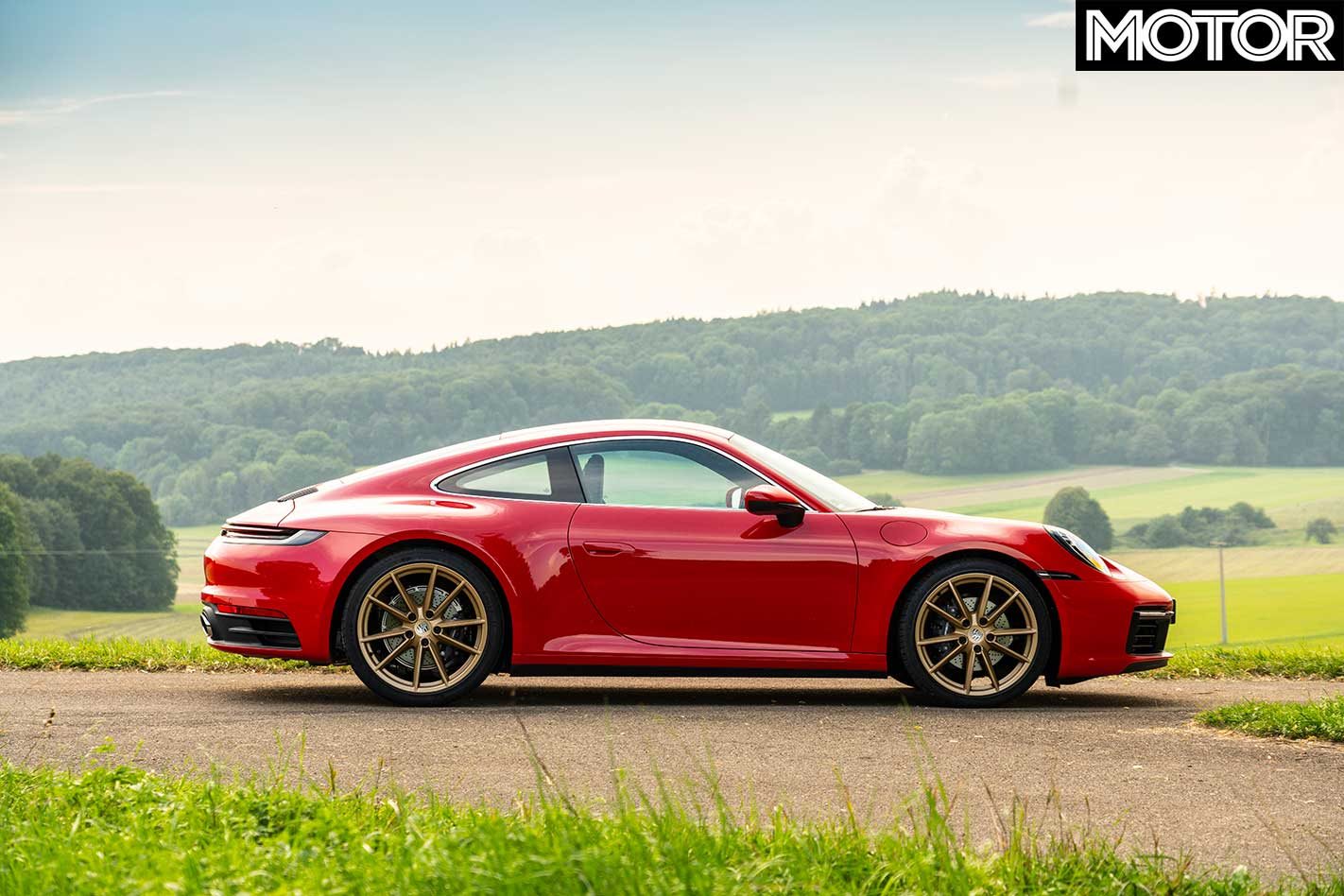 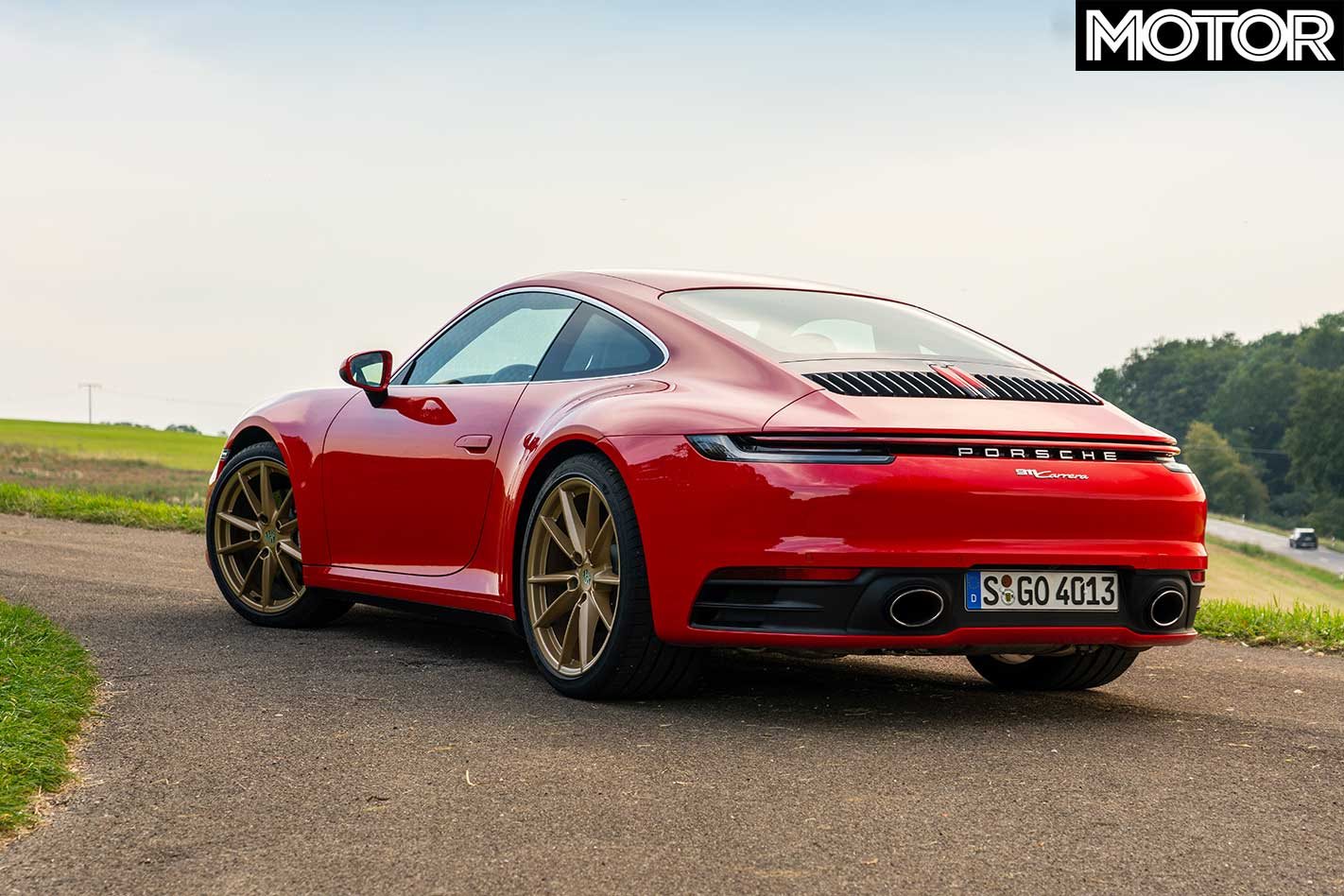 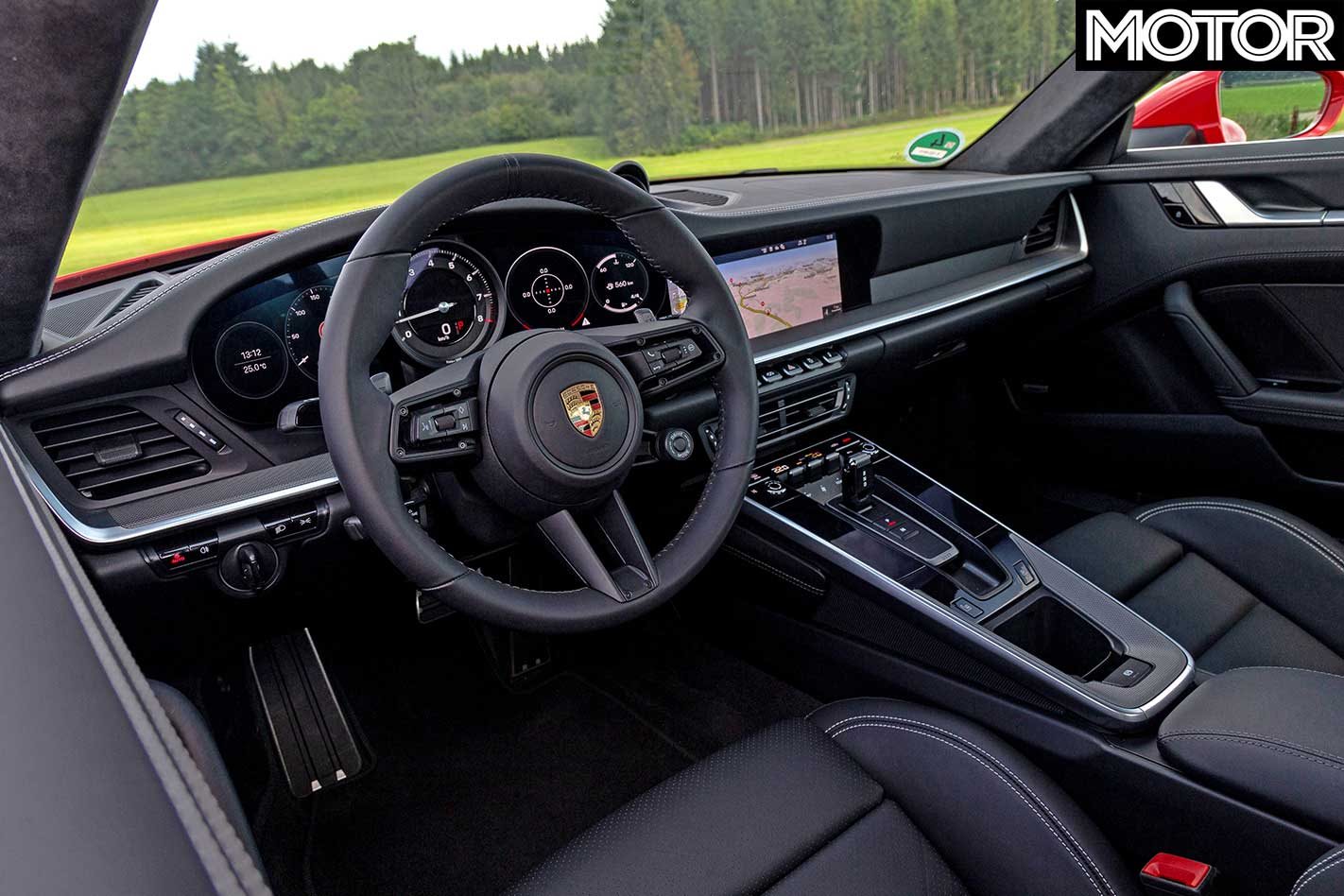 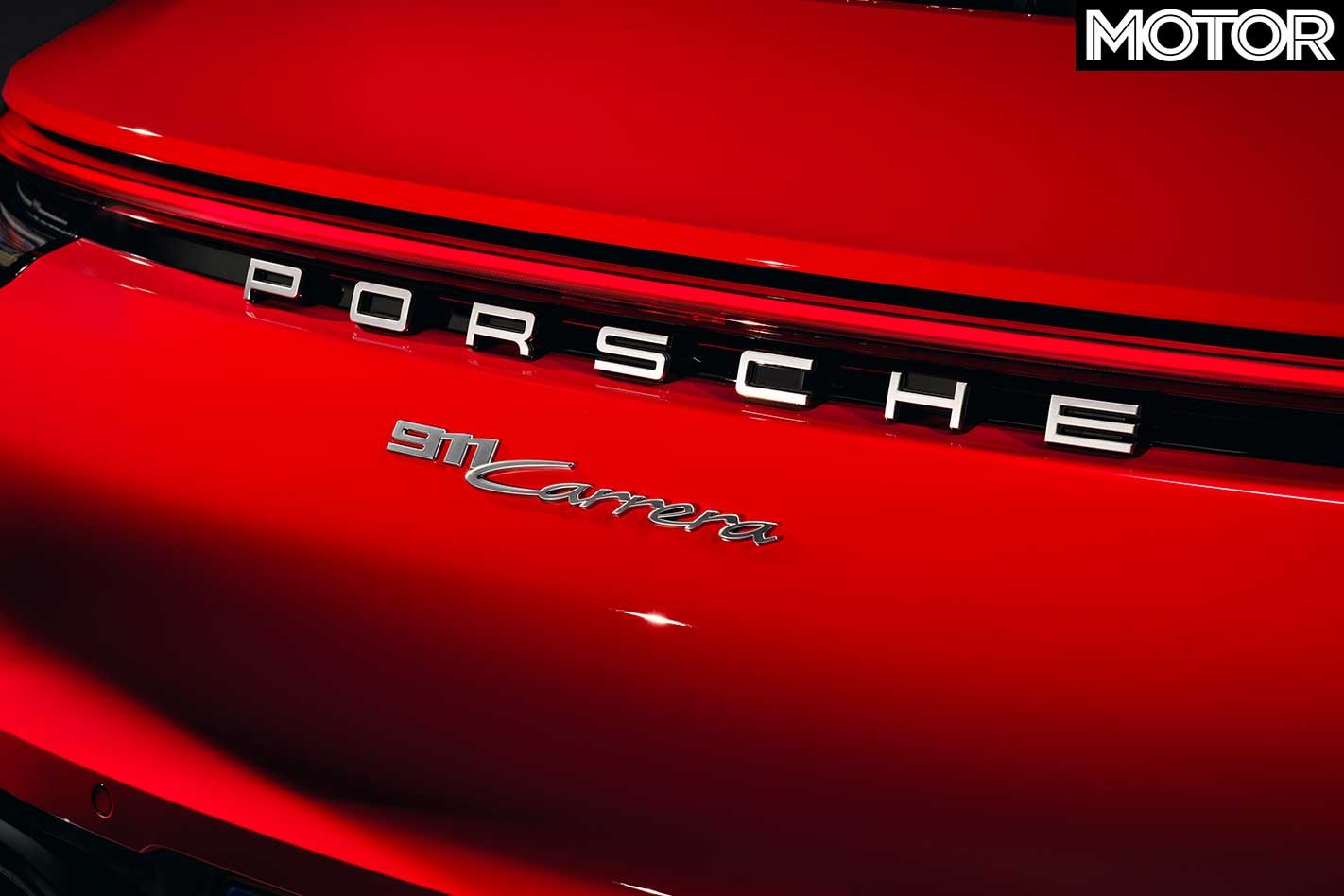