Following hot on the heels of the limited-edition Cayman GT4, the Boxster Spyder is among the last of the current-generation mid-engined Porsche family.

But if you think the Spyder is simply a soft-top Cayman GT4 think again, for while the latter fuses elements of Carrera and GT3 into the smaller Cayman shell, the Spyder merely tweaks the DNA of the Boxster GTS, a car $23,500 cheaper and a phenomenal steer in its own right.

Unlike its hard-top GT4 sibling, the top-of-the-tree Boxster isn’t a product of Porsche’s motorsport department, though there is little separating the two in a straight line. 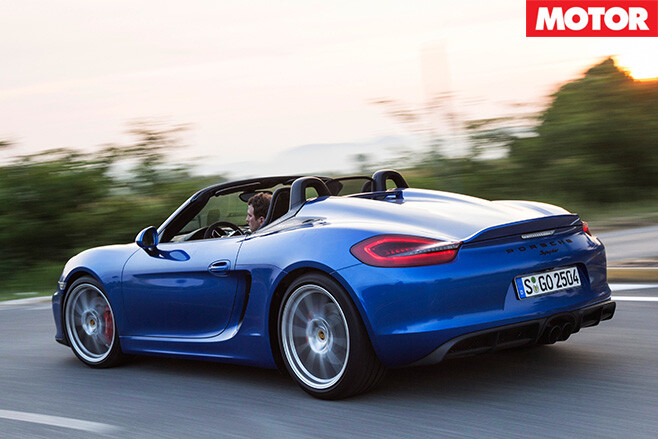 In a move that enthusiasts have been crying out for ever since the roadster’s introduction in 1996, Porsche has fitted the 3.8-litre flat-six from the Carrera S; power and torque decrease from 298kW/440Nm to 276kW/420Nm, but that is still a formidable 33kW/50Nm more than the GTS.

Key to that weight loss is the removal of the folding hard-top roof, replaced by a manually-operated bikini top which looks nice, can withstand an automatic car wash and remain in place at top whack, but requires the deft fingers of a surgeon to operate with any finesse.

Yes, it’s an improvement over the arrangement found on the previous-generation Boxster Spyder, but that will be of little comfort when every sudden weather change threatens to bring on a state of panic. 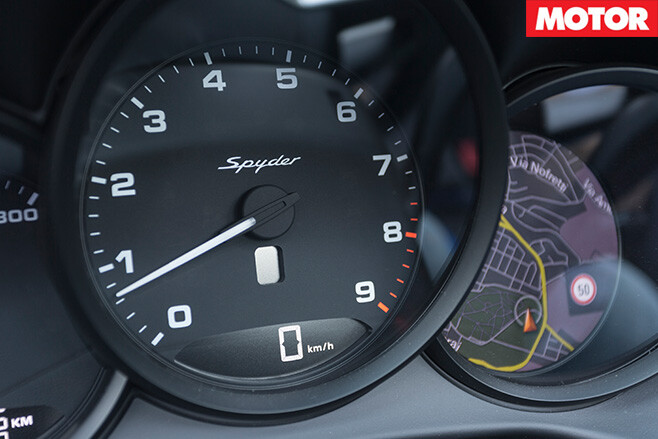 The good news is that this single-layer hoodie provides even better access to the vocal talents of the enlarged engine. The soundtrack emanating from the rear bulkhead is a familiar tune to that of the GTS, but much more raw and intense – above 200km/h the sheer volume of noise threatens to anaesthetise your eardrums like the original 1989 911 Speedster.

Another key difference between GTS and Spyder is the eagerness of the drivetrain. For maximum performance, keep it singing between 4500-7000rpm, where urge, thrust and throttle response are at their peak.

Being thankfully naturally-aspirated, it must work much harder than a turbo engine to muster up the power, but its response is more prompt, throttle modulation could hardly be sweeter and the engine note is a symphony.

The only available gearbox is a six-speed manual, but while the PDK would make it an easier day-to-day companion, the quick, slick manual is as good as they come. 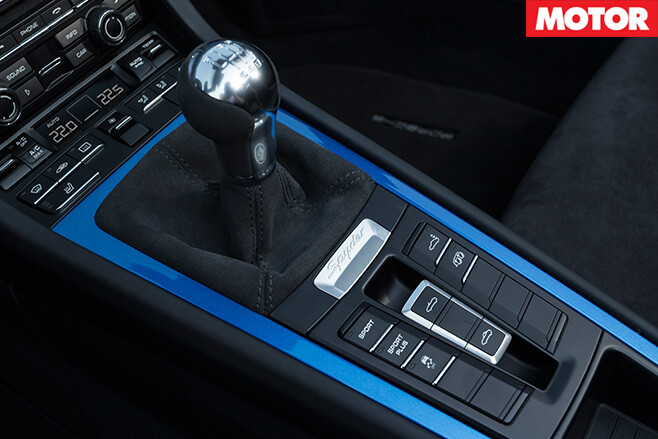 While the Spyder’s chassis hasn’t undergone the thorough re-engineering associated with Porsche’s ‘GT’ cars, it builds on the Boxster’s impressive platform with a 20mm lower ride height, quicker-ratio steering from the 911 Turbo, brakes lifted from the Carrera S (340mm discs with six-piston calipers up front; 330mm discs and four-piston calipers at the rear) and 20-inch wheels wearing 235/35 (front) and 265/35 (rear) rubber.

Carbon ceramic stoppers are a hideously expensive option, and one of questionable value unless your driveway resembles the Nordschleife.

With the serpentine tarmac of the Swabian Albs as our playground, the Boxster Spyder reveals a first-class driving experience, with brakes designed in heaven, super sensitive touchy-feely steering and a chassis that fuses grip, traction and roadholding with five-star finesse.

At the limits of adhesion the ABS will momentarily decelerate the inside rear wheel to quell understeer and pull the nose back in line, even before the intervention of PSM (Porsche-speak for ESP), however with the stability control disabled and those 420Nm turning the rear tyres, the mechanical locking differential ensures the Spyder is every bit as capable with opposite lock applied as its more hardcore brethren. 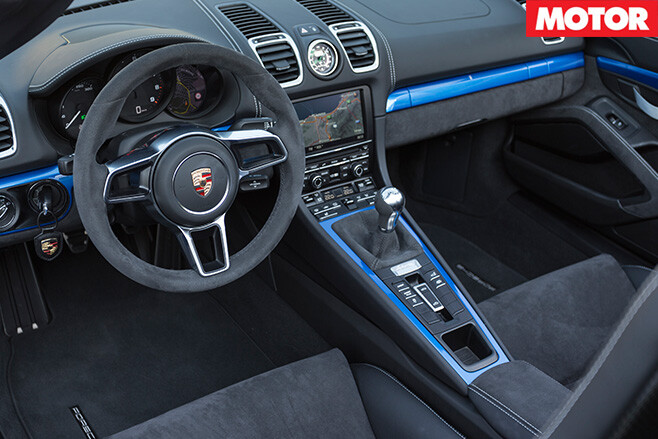 Is it an impressive enough performance to warrant the 15 per cent premium over the already superb GTS? For true driving enthusiasts we suspect it will be, and that’s before taking into account the Spyder’s unique exterior looks, the more aggressive body kit and twin ‘power domes’ ensuring it will never be mistaken for 'just another Boxster'.

Inside, the driving environment is more familiar, though with added dashes of alcantara and colour on the centre console and dash. Tech heads will find the sea-of-buttons infotainment and heating controls somewhat antiquated, but the driving position is peerless with superbly supportive seats (single-piece buckets are optional).

Thus equipped, given the extra performance on offer the $23,500 premium charged over the Boxster GTS begins to take on less relevance.

That said, the Boxster Spyder won’t be to everyone’s taste. It doesn’t have the poise, panache or motorsport-derived credibility of the Cayman GT4, and the compromised roof arrangement makes life harder than it needs to be, limiting the car essentially to a sunny day plaything for most. 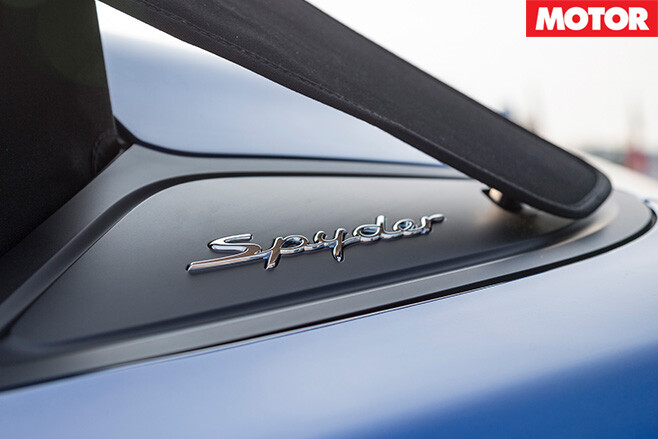 Equally, taking a pragmatic approach, in Australia you’re unlikely to broach the performance limits of the Boxster GTS on the public road, so the extra performance is of questionable purpose.

But pragmatism be damned, the retro-infused Spyder is an incredibly special car, a purist’s driving machine, the very existence of which should be celebrated for as long as possible.

With the imminent arrival of turbocharging, the next-generation of Porsche's sports car range will offer a different experience. Whether or not Weissach's engineers will continue on their current gold run is a question for the future, but for the moment, the hits just keep on coming.