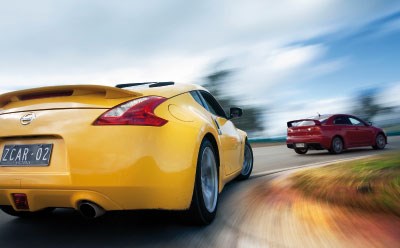 Not surprisingly, given their differing engine and drivetrain configurations, Evo and Zed offer poles-apart driving experiences on a circuit. Yet, as the stopwatch attests, they conspire to produce uncannily similar lap times around Sydney's short and challenging Oran Park north circuit - a blink-and-you-miss-it 0.02sec in the Mitsubishi's favour on a surface damp in parts on our test day.

Each have their strengths in different sections of the track. The Evo is at its best under brakes, turning into corners, and belting out of them with a commendable level of composure, whereas the 370Z generally feels faster in a straight line.

Though both had to deal with the same patchy, moist track conditions, the all-paw Evo certainly felt more composed when it went for a skate on a damp spot. On the other hand, in the 370Z, jumping too hard on the throttle (even in the dry) saw the rear Yokohamas quickly spin free, triggering a lurid but - thanks to the standard viscous limited-slip diff - very controllable powerslide.

In a racetrack environment, though, the Nissan does deliver both fun and thrills. There's little sign of subtlety as it goes about its business, although its power is delivered with good linearity and the steering messages come strongly and consistently.

A torsionally stiff chassis, short, bloke-strength gearshift action, and good-enough brakes all add up to a raucous, good-times driving machine rather than one that does everything impeccably well. The Zed is unquestionably for the purist who dares.

The Evo's 217kW doesn't sound world-beating, but the Mitsu boasts a toughness and competence borne out of its rally-honed evolution that can't be underestimated. Its well-sorted chassis, nicely weighted (and quick) steering, and excellent Brembo brakes combine with its turbocharged 366Nm, all-wheel-drive traction and fine SST dual-clutch transmission to deliver a devastatingly effective driving package.

Brake late, turn in, and get back on the accelerator impossibly early and the Evo stops, turns and goes with a gob-smacking efficiency. Its higher centre of gravity when compared with the Zed is no handicap either, as it goes precisely where the driver intends.

That this AWD car has less understeer at the same turn-in speed as the rear-drive 370Z says much about its dynamic prowess. It's even possible to provoke a small degree of power oversteer before a full-throttle application pulls things straight.

Aggravatingly, Mitsubishi doesn't provide paddleshifters that move with the steering wheel. Midway through a corner, when you need to upshift, you're forced to take your right mitt from the tiller to go searching for the paddle, or use your left to tap the shift lever on the console - both of which destroy the whole reason for having paddles.

Priced below $70K, this pair offer plenty of zing for the ka-ching. Both have much to offer the enthusiast seeking a road car capable of turning track plaything.

If you want a car for expression sessions involving lots of lurid oversteer, the Zed is your car. But if you want a tool for track days, lap dashes or production racing, the Evo is still the pick. Dry or wet, its competitive credentials are unrivalled. 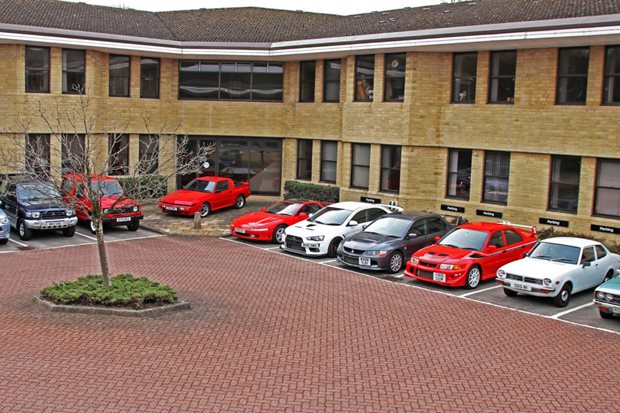 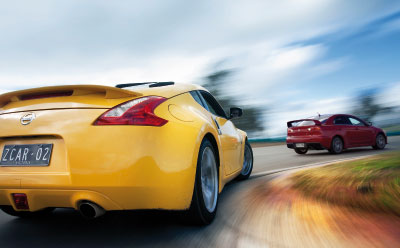 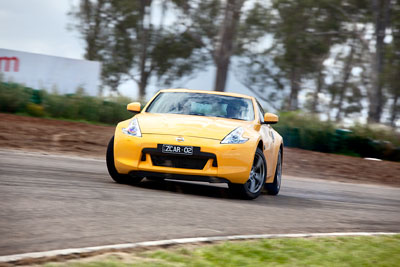 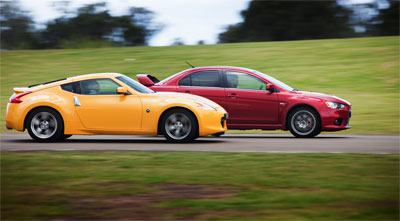