The facelifted Ford Mustang due in Australia next year will lift technology from the Fiesta small car that will allow it see pedestrians in the dark, and automatically brake for them.

Ford announced overnight that both its small city hatch, due late this year, and the facelifted Mustang – criticised heavily in recent independent crash test ratings for not having any driver assist systems – will include auto-braking tech that will help to stop the cars from wiping out an unwary person stepping off the footpath.

Last year, 117 pedestrians died on Australian roads posted with speed limits of 60km/h or less, with another 10 already killed in similar urban speed zones over the first two months of this year.

The European New Car Assessment Program earlier this year slugged the Ford Mustang with a shock two-star crash rating out of a possible five, largely for lacking driver assist systems such as automatic emergency braking (AEB). It was also scored down for offering what Euro NCAP assessed as poor child protection in the rear seats.

Ford has since said that a significant mid-life makeover of the Mustang on sale in the US in a few months’ time – but not due here until early next year – would include an AEB system. 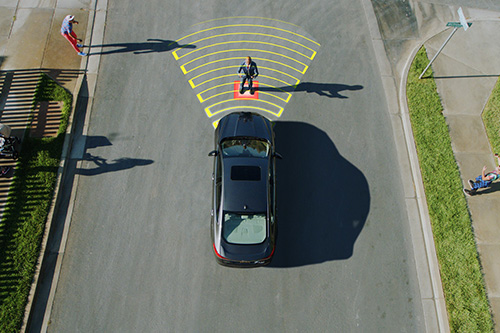 Ford’s breakthrough with its pedestrian detection system over some rivals is that it can detect pedestrians picked out in the dark by the car’s headlights, as well as in daylight.

It uses a front bumper-mounted radar and a camera housed near the rear-vision mirror to watch the road ahead, and compare what it sees with a database of pedestrian “shapes” to ensure it isn’t confusing them with things such as trees and road signs.

Once it spots someone and works out that a collision is likely, the system will sound an alert and flash a warning signal in the driver’s eyeline. If the driver doesn’t react, the car will automatically jump on the brakes. 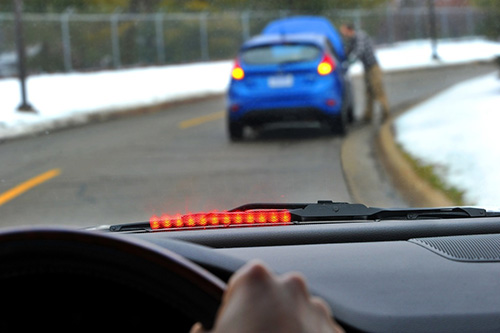 Despite its two-star crash rating, the Mustang scored reasonably well for pedestrian impacts in its Euro NCAP assessment, although it was marked down for not having an auto-braking function that would automatically stop for them.

The car on sale today does come fitted with an active bonnet that uses sensors hidden in the front bumper to recognise if the Mustang is hitting a pedestrian. It can then automatically raise the trailing edge of the bonnet to create a bigger safety buffer over harder parts in the engine bay such as the engine and front suspension towers.

The reborn Mustang – built for the first time ever in right-hand drive – has become roaring success in Australia. Ford anticipated it would sell about 1000 of the turbo four-pot and V8 sports cars locally in 2016, and instead it sold more than 6000. 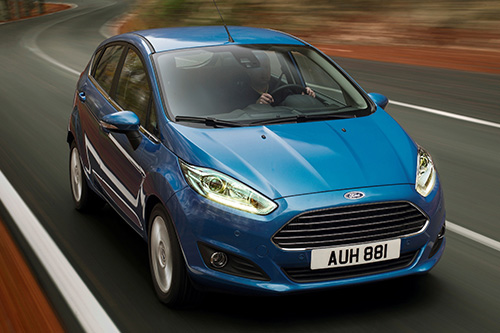 Ford has claimed its next-generation Fiesta will be the world’s most technologically advanced small car when it goes on sale. However, like the updated Mustang, it’s likely to be next year before we see the smallest Ford in the Australian line-up replaced here.

European versions of the Fiesta will include two cameras, three radars and 12 ultrasonic sensors surrounding the vehicle that can detect hazards and alert the driver.

It is likely to include a 103kW turbocharged 1.0-litre engine mated to a new six-speed automatic transmission.

Despite its decent ride and handling, and Euro design influence, the current Fiesta is a minor player in Australia’s light car segment dominated by the Mazda 2, Toyota Yaris and the Hyundai Accent, each with about a 15-20 percent slice of the market that is struggling to maintain once-healthy levels of sales.

In contrast, the Fiesta commands only a 3.5 percent market share.

Ford Australia announced shortly after its 2013 decision to shutter Australian manufacturing that it would be introducing 20 new or updated models to the Australian market by 2020.