A DAY after corporate cousin Opel whipped the covers off its next-generation Insignia Sport Tourer, Holden has followed suit and announced that yes, Opel’s sleek family wagon will be coming our way as a Commodore.

Set to go on sale locally in 2018, the next-generation Holden Commodore Sportwagon will appear in the metal in March at the Geneva Motor Show wearing Opel badges on its snout and tailgate.

While the Sportwagon lacks the more pleasing proportions of the rear-drive current-generation Holden VFII Commodore version, the transverse-engined 2018 model nevertheless sports an attractive profile… for a front- or all-wheel-drive wagon.

Compared with the outgoing Insignia five-door, the 2018 model’s rump appears slimmer and neater, with the tailgate cutline no longer ballooning out, Audi Q7-style, around the tail-lights. The rear glass is less steeply raked than before, and the chrome window trim arches up over the side glass before plunging across the C-pillar and puncturing through the tail-light jewellery.

There’s less sheetmetal between the top of the rear wheel arch and the bottom of the glasshouse, while the rear quarters are more pronounced than the outgoing model. Lined up against the current-generation Insignia wagon, it’s definitely more trimmed and toned.

The rest of the car’s exterior apes the 2018 Commodore ‘sedan’ (which is actually more like an overgrown five-door hatchback), making for a sleek alternative for SUV-shy motorists with luggage to haul. 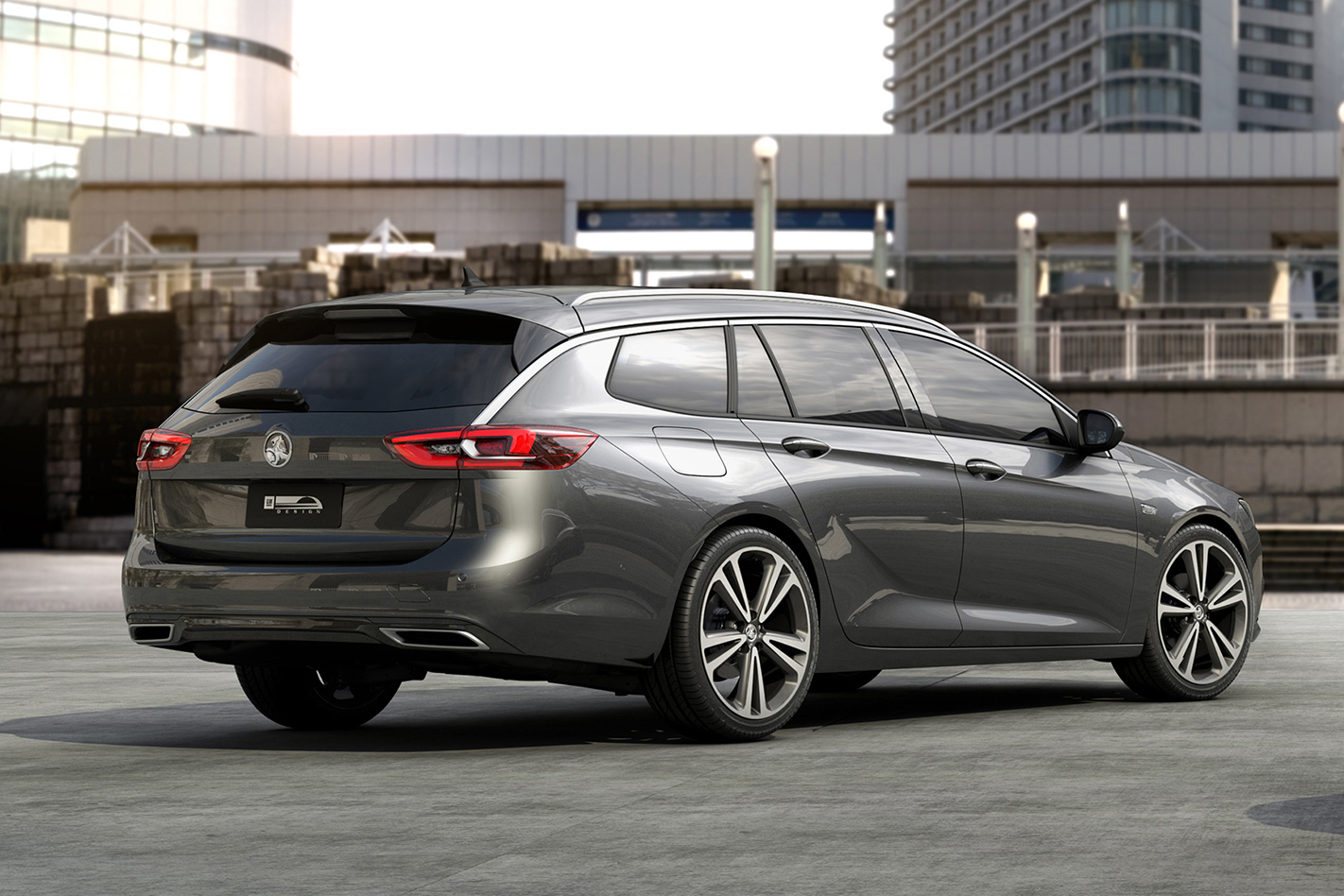 Holden promises it’ll be packed with convenience features, with the Sportwagon’s tailgate set to gain a hands-free opening function for the first time. Instead of fumbling for keys or having to reach for a button when your hands are full of groceries, the 2018 Commodore Sportwagon’s tailgate will open or close by kicking a foot under the rear bumper. The tailgate will open to a sizable load area, measuring 1640 litres with the rear seats folded down, and 520 litres with them up.

An optional  40/20/40 split rear seatback will allow greater cargo-carrying flexibility. Those seatbacks can also be dropped from the rear of the car, via a button located in the boot area.

Compared with the current Commodore Sportwagon, the 2018 car will weigh up to 200kg less largely via its smaller, lighter east-west four-cylinder engine configuration, plus greater use of lightweight materials.

The powertrain range will mimic that of the Commodore sedan/liftback, with a 230kW/370Nm petrol V6 flagship sitting above a pair of 2.0-litre four-cylinder turbo petrol and diesel engine options. The V6-engined model will feature all-wheel drive and a nine-speed automatic, while the four-pot Sportwagons will take a more conventional front-wheel drive configuration.

It’s a similar story with driver aids and other technology, with everything from adaptive dampers, lane-keep assist, autonomous emergency braking, a head-up display, massage seats, radar-assisted cruise control and LED headlamps all set to feature on the 2018 Sportwagon.

Holden is yet to say when the wagon will arrive, although the four-door hatchback is slated to go on sale locally in February next year. A crossover-style version of the Sportwagon based on the Opel Insignia Country Tourer is also expected to arrive sometime next year, but has yet to be announced by Holden.