UPDATED 10 November - In a further blow to DJR Team Penske's 2019 Bathurst 1000 campaign, the team has been slapped with a further $30,000 fine after officials determined the engine used in practice and qualifying by eventual winner Scott McLaughlin fell outside the category's rules.

“Following the Event, Engine 009, which was used in Car #17 in Practice Sessions 1 to 7, in Qualifying for Race 25 and in the Top 10 Shootout (and then replaced prior to the Warm Up for Race 25), was examined by Supercars Technical personnel and the valve lift in a number of cylinders was found to have exceeded the maximum permitted valve lift prescribed by the ESD for Car #17,” read a Supercars official report issued during the Sandown 500.

The engine - which was changed after overheating issues - was impounded along with three other engines from the event, and it wasn't inspected until after the recent Gold Coast race.

Five cylinders of the eight exceeded the mandated valve lift threshold, according to Supercars media.

McLaughlin has been stripped of his Bathurst pole position, with Tickford Racing's Chaz Mostert promoted into the spot in the record books.

McLaughlin (below) and co-driver Alex Premat have also been banished to the rear of the grid from fifth for the start of the 500km enduro.

The team issued a statement that confirmed that the engines used during the race passed all inspections but admitted that the qualifying engine in car 17 fell foul of the rules.

"We can only conclude that either the engine wasn’t measured properly when it was initially assembled or the damage that occurred in the engine contributed to a change to the maximum valve lift in the forward cylinders," read a statement from the team.

The team also pointed out that the steward’s report confirmed that there was "clearly no intent from our team to circumvent the rules", and that there was "no evidence that we benefited from any performance advantage".

"We apologise to Scott, Alex, our partners and our supporters, and we will continue to focus on winning our second consecutive Virgin Australia Supercars Championship," concluded the statement.

McLaughlin can wrap up his second title a round early by simply completing the Sandown 500.

The engine breach adds to the pain for Supercars juggernaut DJR Team Penske, which has been slammed with the biggest fine ever seen in the sport's history.

The team has been found to have breached the International Sporting Code of motorsport's governing body, the FIA, after an incident during the 2019 running of the Bathurst 1000 enduro, won by Team Penske driver Scott McLaughlin. 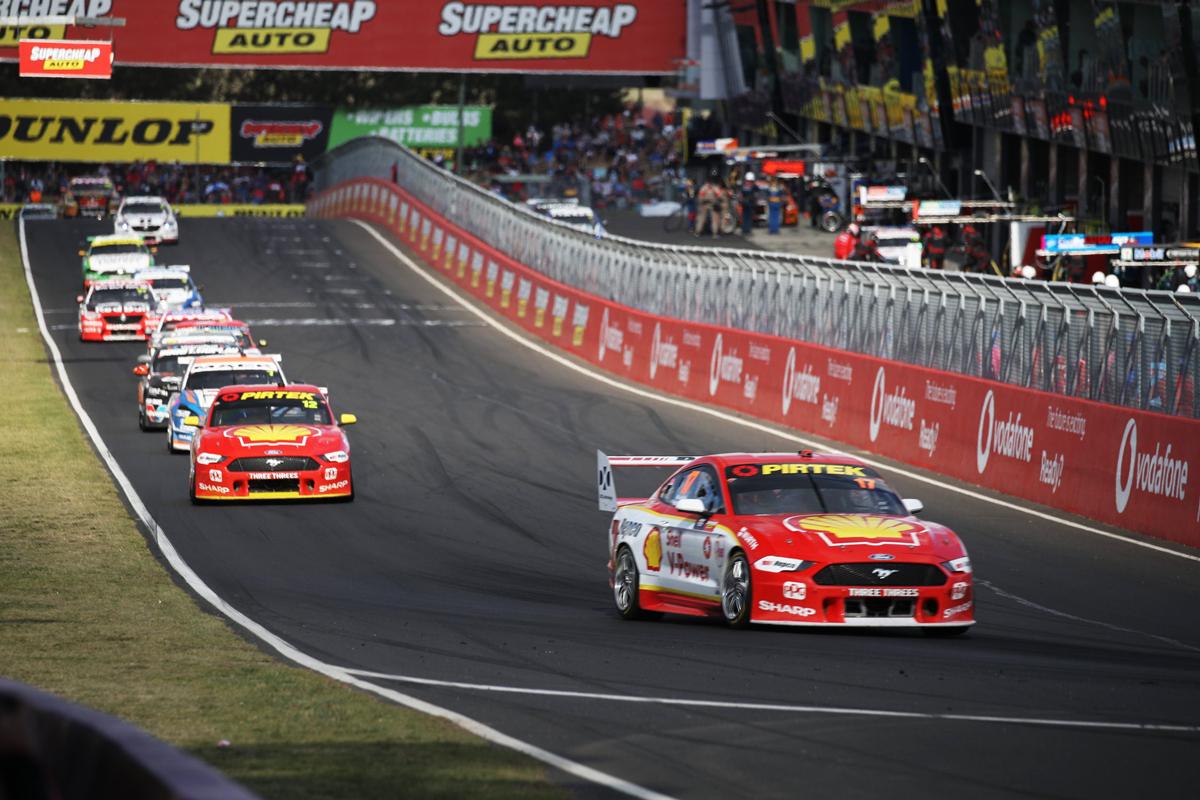 McLaughlin's teammate, Fabian Coulthard, was instructed by the team to slow down on lap 134 of 161, in response to a safety car deployment. He was in third place in the race at the time, while McLaughlin led the field from Red Bull Holden arch-rival Jamie Whincup.

Though the team's communications to Coulthard at the time talked of debris on the track and a possible water temperature issue with his car, the resultant slowdown ensured that his teammate could gain a time advantage on the field as the race drew to a close.

While McLaughlin kept his maiden Bathurst 1000 win and the crucial championship points that went with it, Coulthard has been dropped from sixth to last, while the team has also been stripped of 300 team points.

"Look, I am not sure if that made the difference to who won the race," Roger Penske, the majority owner of DJR Team Penske, told media after the race.

"We can look at it and talk about it but it is secondary as far I am concerned when you think about it.

"Everyone had a chance, and the two top duelled it out in the end and the outcome was what we wanted."

“It was a directive from the team," Coulthard told supercars.com.

“The team said to me ‘take extreme caution, the engine is hot’.

“I’m actually reading my phone now and I’m getting smashed [on social media] for something I’ve been told to do.

“I’m a little bit pissed off. I did what I was told and I’m getting murdered for it.”

Other members of the Supercars fraternity have been less kind, with many labelling the tactic as cheating, and accusing Team Penske of using Coulthard as a "sacrificial lamb" for McLaughlin's first Bathurst 1000 win.

Eugene Arocca, who heads the FIA's appointed motorsport arm in Australia, CAMS, has said the fine - $100,000 of which is suspended pending good behaviour until the end of the year - will go towards improving safety in the sport.

“The penalty issued today regarding the breach of the ‘FIA International Sporting Code Appendix B’ reflects the serious nature of the incident that took place at the Supercheap Bathurst 1000,” said Arocca in a statement.

“It is also important to note that the money received from the fine will go directly into the Supercars’ Fines Fund, which is used exclusively for safety research and programs, as well safety-related infrastructure, such as the development of in-car warning systems."

MORE Read more: now you can live on Conrod Straight

“I would also like to acknowledge DJR Team Penske’s co-operation with all requests from our stewards throughout this process,” he said.

“After reviewing data from Car #12 following the Bathurst 1000 with the Stewards and Deputy Race Director, DJR Team Penske accepts the penalties issued related to the FIA International Sporting Code,” read a brief statement from the team.

“The team will be making no further comment at this time.”

Landmark sales for the flat-four, all-paw weapon ahead of fifth-gen's arrival later this year