This test mule of a hydrogen-powered, US market Toyota Highlander is a long, long way from home.

TOYOTA has been caught testing a big-nosed, fuel cell-powered version of its Kluger seven-seat SUV in Australia.

Wheels reader Glenn Milne snapped this unusual-looking left-hand-drive version of the Kluger – sold in the US as the Toyota Highlander – in Mildura, where it appears the Japanese car maker’s engineers have chased the hot weather.

Adding weight to the idea that this is a hydrogen-powered electric vehicle is the plainly visible reinforcement to the chassis – fuel cells weigh much more than conventional internal combustion drivetrains – and the lack of an exhaust pipe poking out the rear. 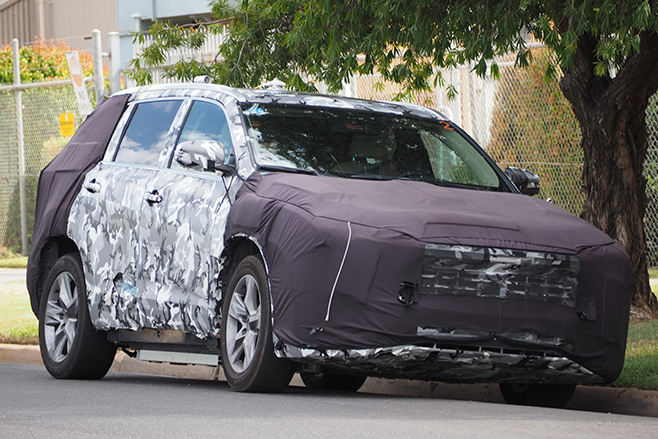 Toyota has a specialist fuel cell development program based in the US that has spawned a fuel cell-powered version of the last-generation Highlander/Toyota Kluger.

It has also become the first manufacturer to mass-produce a fuel cell vehicle, the futuristic-looking Mirai sedan. The carmaker has imported three of the vehicles – and more importantly for our H-fuelled Highlander, a portable refuelling station – in a bid to gain government support for hydrogen as a transport fuel.

The rough-looking development mule suggests Toyota is keen to soon add an alternatively fuelled version of the Highlander to its US showrooms; a key part of its plans to have a hybrid or alternatively powered version of every model in its showroom by 2020.

Adding weight to the H-Kluger’s importance, Toyota announced this week that it is close to striking a deal with fuel retailer Shell to roll out seven hydrogen refuelling stations in California. The US state is even tipping $US16 million ($A21 million) into the project to help get it off the ground. 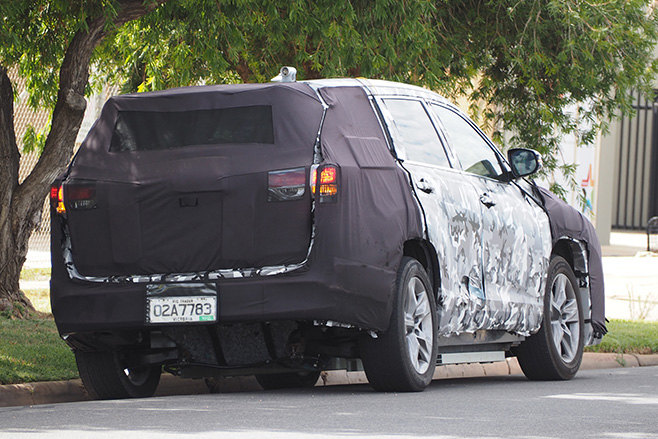 Toyota Australia has said it needs government support here to start rolling out hydrogen refuelling stations – a move that would potentially boost sales of the petrol V6-only Kluger.

Kluger’s sales in Australia are limited by the fact that Toyota doesn’t sell a diesel-engined version of the large SUV in a corner of the market where acceptance of more fuel-efficient oil-burners among buyers is high.

The Toyota New Generation Architecture that underpins the Mirai, and the soon-to-launch Toyota H-CR compact SUV, allows for a fuel cell to be built into future Toyota- and Lexus-badged cars.

Have any spy pics of your own? Fire them into wheels@wheelsmag.com.au.