By Toby Hagon and WhichCar Staff

The Australian-built Toyota Camry has been country’s best-selling mid-sized car – and by a huge margin. You get a lot for the money, with plenty of space and the option of hybrid power. The Camry is also good to drive, with nice balance, and in hybrid form a responsive drivetrain.

Friends who want you to drive something more exciting.

Perhaps the look and feel of your Camry inside, if you have ridden in a friend’s recent mid-sized alternative. It has not changed much since 2011, and may seem cheap and cheerless by comparison.

All Camrys are front-wheel drive. The Camry is classed as a medium-sized car, lower priced.

What features do all Toyota Camrys have?

Cruise control, Bluetooth connectivity for phones and audio streaming, and a 6.1-inch or bigger central touchscreen. An MP3-compatible sound system, with AM/FM radio and a CD player.

A reversing camera, and parking sensors front and rear.

Wheels made from an alloy of aluminium (lighter and nicer looking than steel wheels).

Electronic stability control, which can help the driver recover from slides. All new cars must have this feature.

This also happens to be the most powerful engine, so that the main reason not to purchase a hybrid Camry is the higher initial price.

A second reason might be that you intend to use the car mainly on long journeys. The hybrid drivetrain does its best work around town, where it can harvest energy usually wasted in braking. On the highway, it loses much of its efficiency advantage.

(An Atara SL Hybrid tested for the September 2016 edition of Wheels magazine returned a real-world average of 9.1 litres 100km. That ranked it among the less thirsty of 10 mid-sized cars for a mixture of city and country use, but it was not the least thirsty.)

A third reason might be that the hybrid Camrys are rated to tow only a much lighter trailer than the non-hybrid versions: 300kg total, compared with 1200kg.

Non-hybrid Camrys are powered by a 2.5-litre four-cylinder petrol engine that produces up to 135kW, with good mid-speed response.

The hybrids use a retuned version of that petrol engine, and add an electric motor that can produce up to 118kW on its own. However, the two motors produce their peak power in different driving conditions, so that a hybrid’s combined maximum output is 151kW.

All Camrys are supplied with an automatic transmission: there is no manual transmission option. Petrol Camrys use a conventional auto with six ratios. Hybrids use a continuously variable transmission or CVT, which adjusts steplessly to the driving conditions.

The least costly Camry, the Altise, rolls on 16-inch wheels and has cloth trim on the seats.

Spend more for the Altise Hybrid and you also get smart key entry, which means doors can be unlocked without taking the key out of your pocket or handbag. There is dual-zone air-conditioning, which lets the driver and front passenger set temperatures independently.

The Atara S adds satellite navigation, and five-way powered adjustment for the driver’s seat. Wheel diameter rises to 17 inches, and they mount slightly shallower – or lower profile – tyres in the same width.

The Atara SX adds partial leather seats (they’re a mix of real and fake leather), unique headlamps, a rear window blind that can be deployed electrically, and sporty design touches such as alloy pedals and a body kit. It also gets firmer suspension, for more stable cornering, and bigger, 18-inch tyres that are slightly wider and with an even lower profile.

The Atara SL shuns the SX’s sporty touches and instead ramps up the luxury features. Seat trim remains part-leather, but both front seats are power-adjustable. Windscreen wipers operate automatically when it rains, and headlamps dip automatically for oncoming traffic. There is a more powerful, 10-speaker sound system. Place a compatible smartphone on the centre console and you can charge it wirelessly.

The SL also has active cruise control – which can automatically match the speed of a slower car on the highway – and several active safety features designed to avoid a crash. They comprise auto emergency braking, lane departure alert, a blind-spot warning system, and a rear cross-traffic alert. (For more on these features, please open the Safety section below).

You can get the Atara S and SL in Hybrid versions. There is no hybrid Atara SX.

(Toyota has also offered a special edition named the Camry RZ, which is a sports-themed version of the cloth-trimmed, petrol-engined Altise. In its most recent form, released in November 2016, the RZ brings you a 7.0-inch touchscreen with digital radio, satellite navigation, dual-zone air-con, and smart-key entry. A firmer suspension tune controls 18-inch wheels. A marginally more powerful engine with twin exhaust tailpipes, and sporty visual touches, complete the package for the 700 Camry RZs produced.)

The lower profile tyres on the bigger wheels may ride more roughly and cost more to replace.

White is the only standard colour, with the other nine hues costing extra.

How comfortable is the Toyota Camry?

It might officially be a mid-sized car but the Camry is closer to a large car when it comes to interior space.

The Altise has some bland trim and a plasticky steering wheel, but the main controls are great to use and the dash is spruced up with some stitching across its sweep.

A Camry cabin is a pleasant enough place in which to spend time – but it may feel spare and old-fashioned by comparison with many mid-sized alternatives. Seats are comfortable but not especially so. Over bumps or second-grade roads the less sporty versions ride well.

The SX (and limited-edition RZ) gets a slightly firmer suspension setup to go with the sportier sales pitch. Combined with the lower profile tyres it will jiggle over small bumps more noticeably than the other models. That is less intrusive above about 70km/h.

What about safety in a Camry?

Seven airbags, the mandatory stability control, parking sensors and a standard reversing camera make for a good safety package. There are seatbelt reminders for all seats.

The relatively expensive Camry Atara SL steps it up a notch with an active safety suite. Its Pre-Collision Safety System offers automatic emergency braking, which is designed to alert you to obstacles in front of the car – typically another vehicle that has slowed sharply – and apply the brakes if it believes a collision is imminent. The radar-based system works at city and highway speeds.

The Atara SL’s Lane departure warning alerts you if you are drifting – perhaps dangerously – out of your lane on the highway. Its Blind spot warning alerts you, when you indicate to change lanes, if a vehicle in that lane is hidden near your rear corner.

The SL’s Rear cross-traffic alert helps you reverse safely out of driveways and parking spots. It warns you of vehicles crossing behind you.

The Australasian New Car Assessment Program (ANCAP) rated the Camry’s safety at five stars, its maximum, in May 2015.

The Camry petrol engine is all about getting the job done rather than doing it in an exciting way. It sounds dull and produces only moderate acceleration. The auto transmission sometimes takes too long to shift into a lower gear, exacerbating the lack of go.

Battery assistance improves things in a petrol-electric Hybrid Camry. The drivetrain feels sweetly muscular and most people would be surprised by how quickly the car can be hustled.

The tyres on Altise models offer only average levels of grip, while tyres on the S and SL have more. The standard suspension tune works well on Australian roads, and through bumpy corners a Camry feels unruffled and holds its line gamely.

The SX model with its firmer suspension takes some of the unwanted leaning out of the equation, and benefits from 18-inch tyres with great grip. The steering is also slightly sharper, combining with the tyres to improve cornering accuracy.

There is a refreshing breadth to the Camry cabin that makes getting three adults in the rear an easy task. Rear leg room is very generous, ensuring good comfort for tall people, while rear air-conditioning vents help cool the cabin quickly. You might find that the rear backrests supply too much recline.

The retractable rear blind in the Camry SX and SL is a bonus for keeping some of the sun out.

Boot space in the petrol versions is capacious, with 515 litres and a split-fold rear seat.

However, hybrid models make do with a smaller boot (421 litres), because their batteries use space. Those batteries also mean that barely more than half the seatback can be folded, limiting usefulness for larger or bulky items.

Where does Toyota make the Camry?

All the Camry models featured in this review were made in Australia.

If you are considering a less costly Camry, perhaps active safety aids. For example, several alternative mid-sizers offer automatic emergency braking on all versions, among them the Mazda6, Subaru Liberty and Volkswagen Passat.

Among other mid-sizers worth considering are the Ford Mondeo, Hyundai Sonata and Kia Optima.

When did Toyota update the Camry?

The Aussie-built Camry received a major revision in the first half of 2015. While the interior was largely unchanged, it got new panels outside that gave it a fresh look. Minor equipment upgrades were made in June and December 2016.

It Camry was replaced in November 2017 by a new-generation, imported Camry. The new Camry offers petrol-electric hybrid four-cylinder and petrol V6 engines, both using direct fuel injection. All cars have sophisticated double-wishbone rear suspension (for improved handling), and auto braking.

We will have a separate review once we get to test drive the new Camry. In the meantime you can look up 2018 Toyota Camry pricing and features.

WhichCar reviewers like the Atara S Hybrid. For the money, it offers a nice blend of city savings and open-road usability. Note the low towing limit, however.

For a slightly more engaging drive with less emphasis on urban use, the Atara SX offers low running costs and good value. 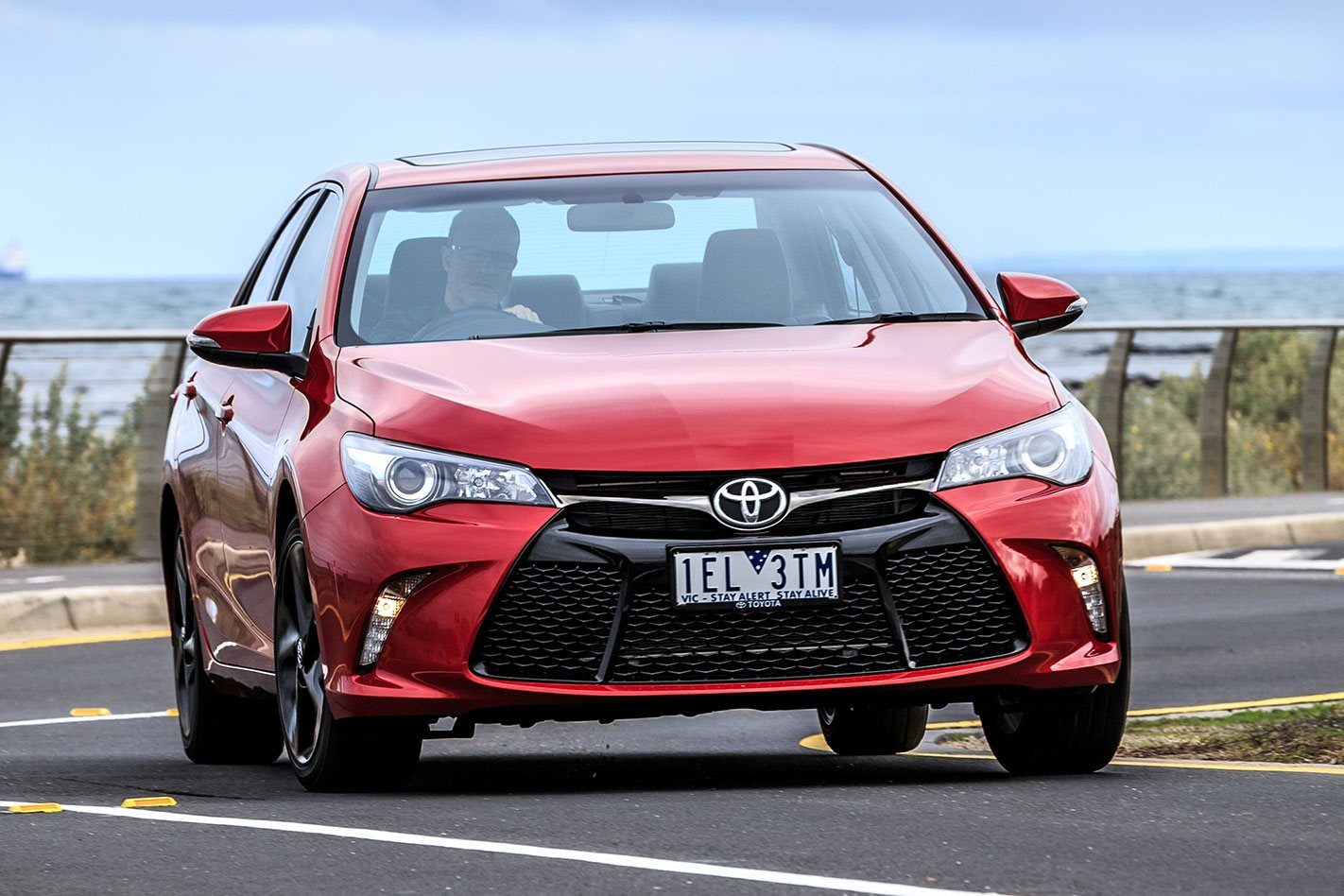 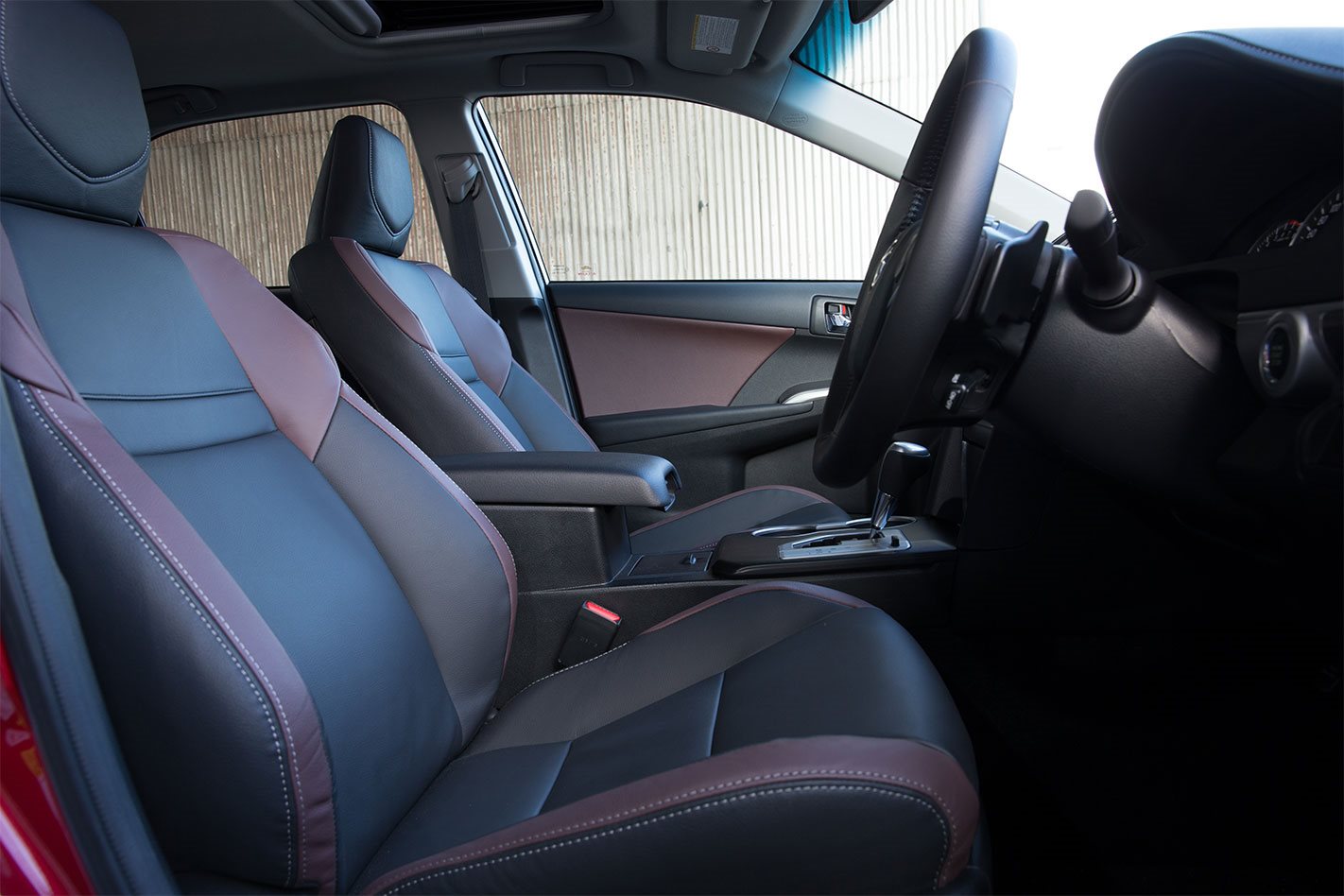 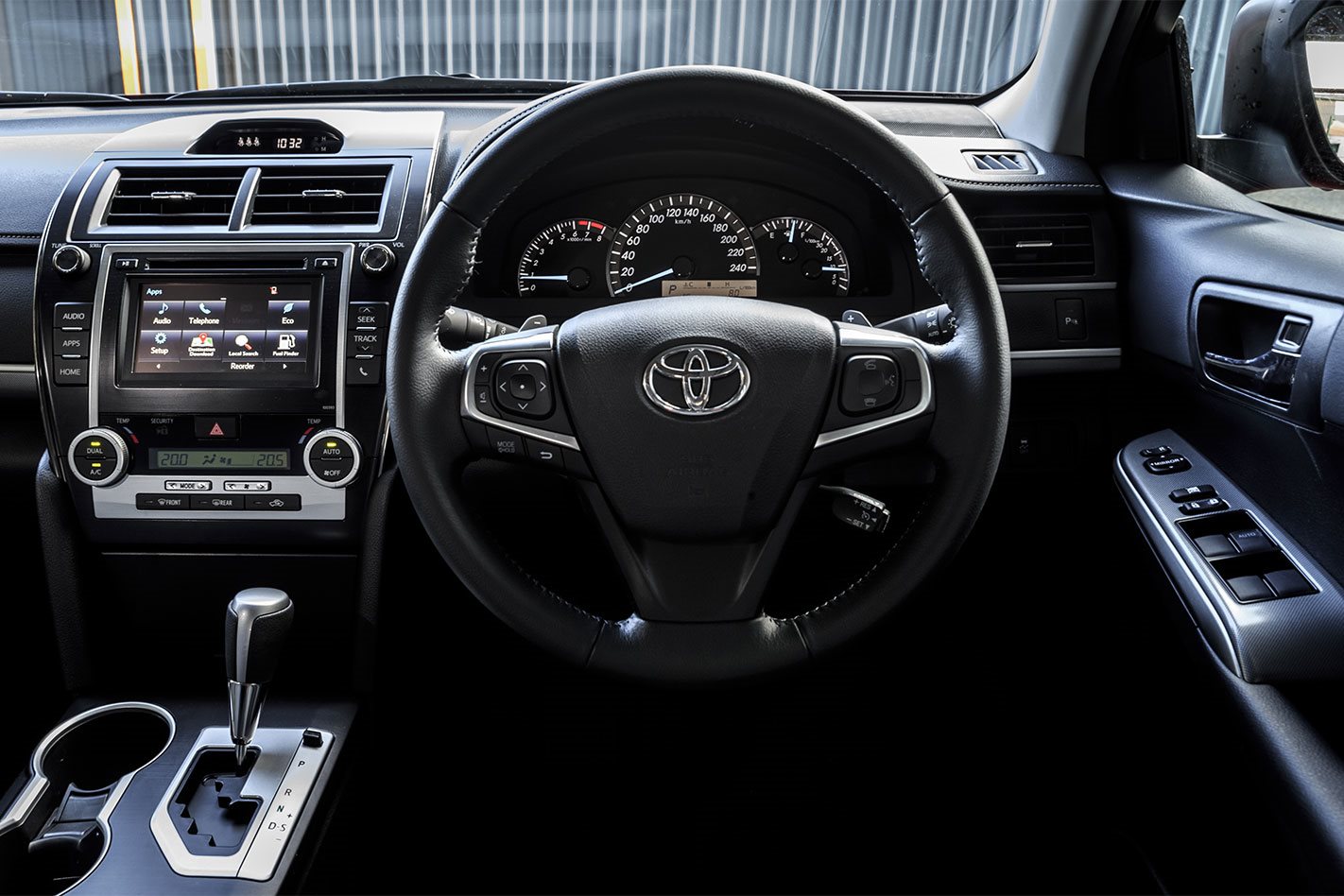 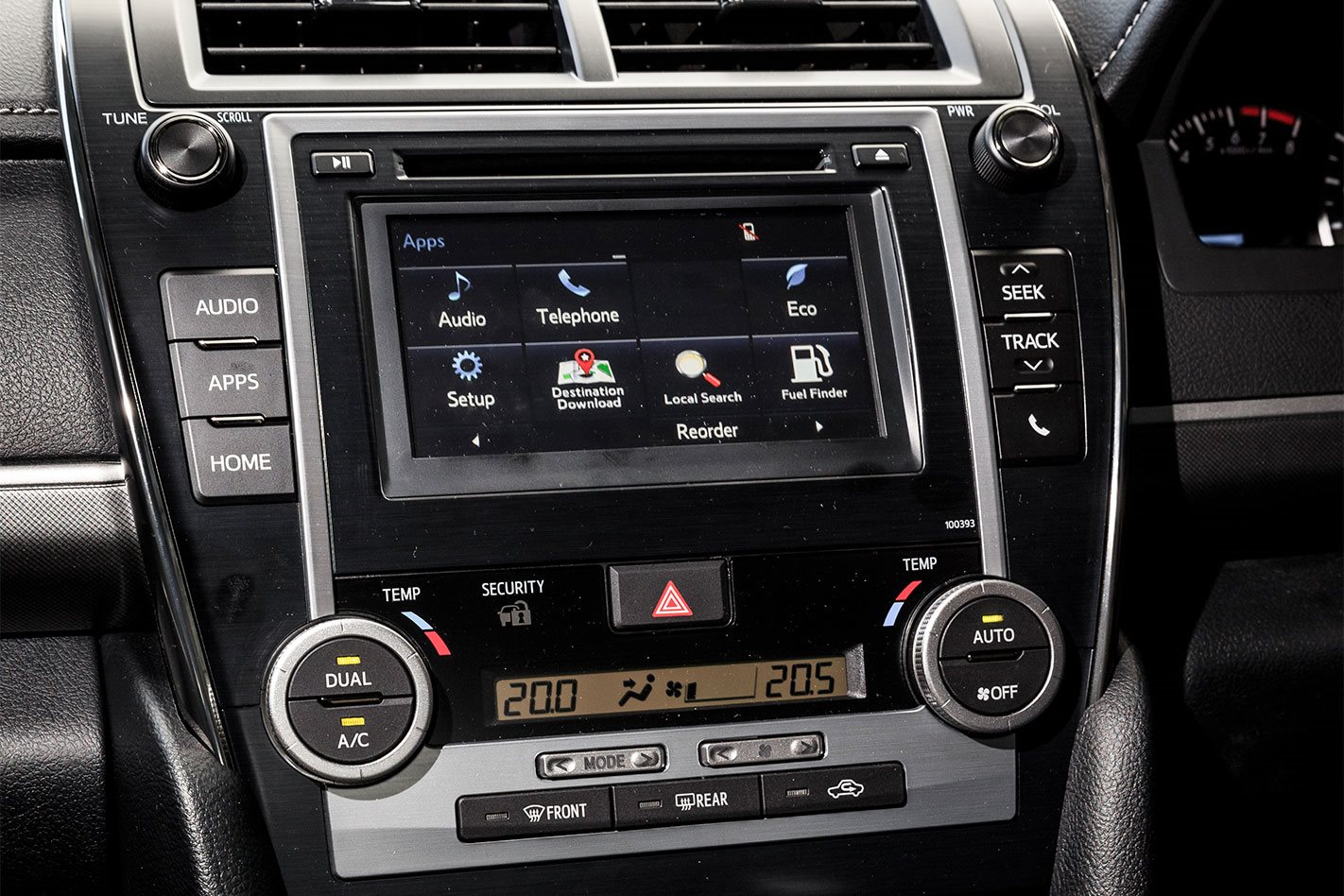 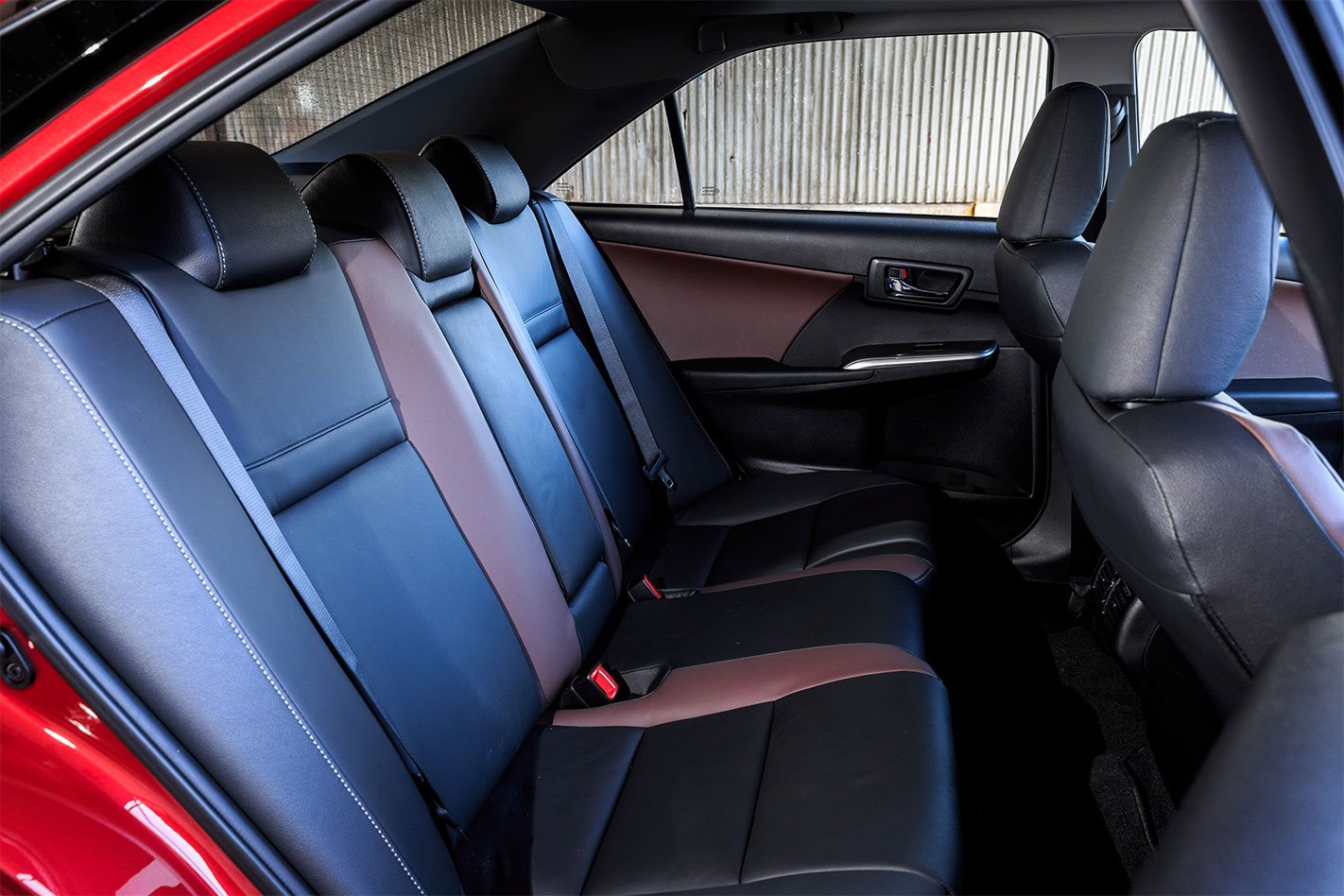 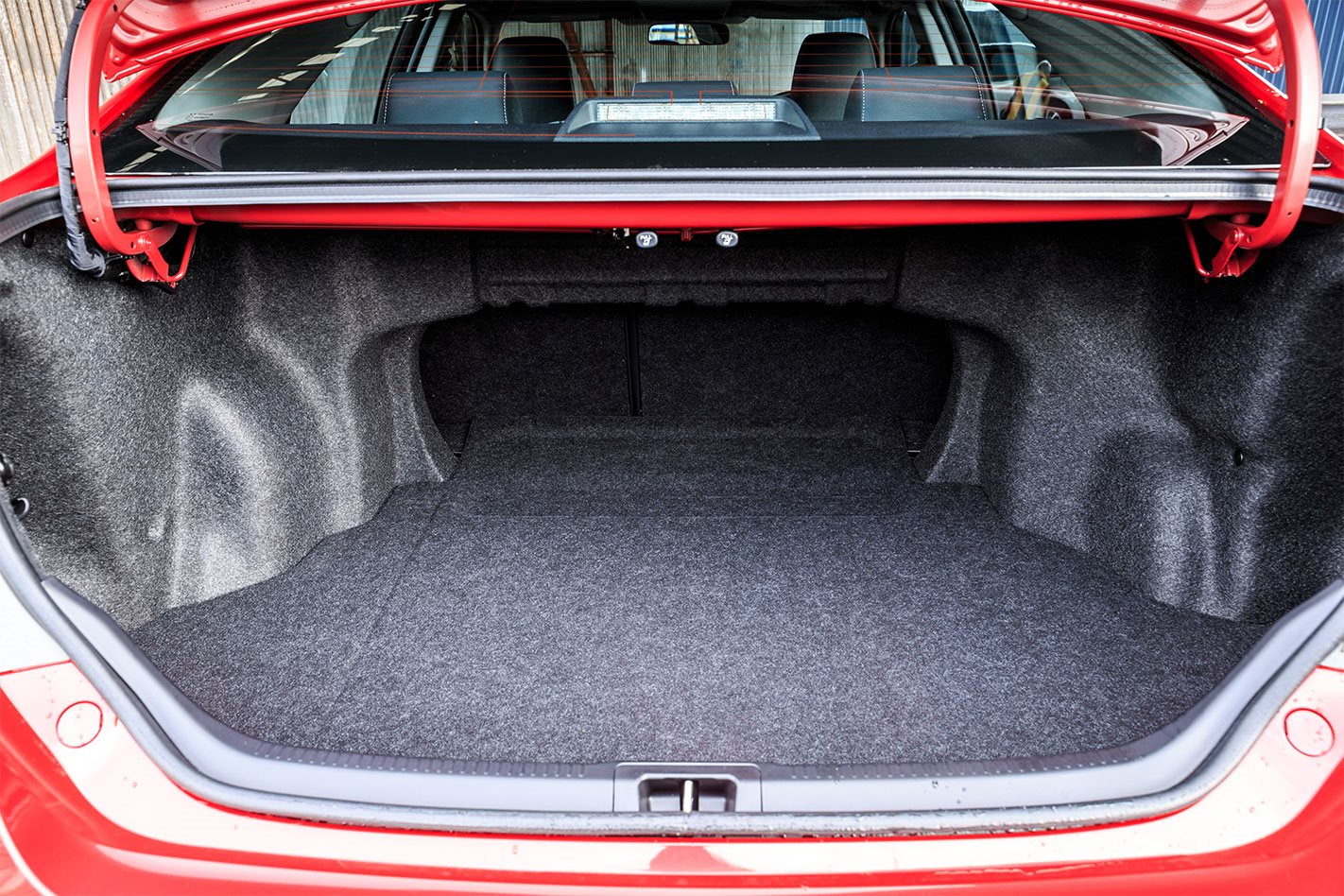 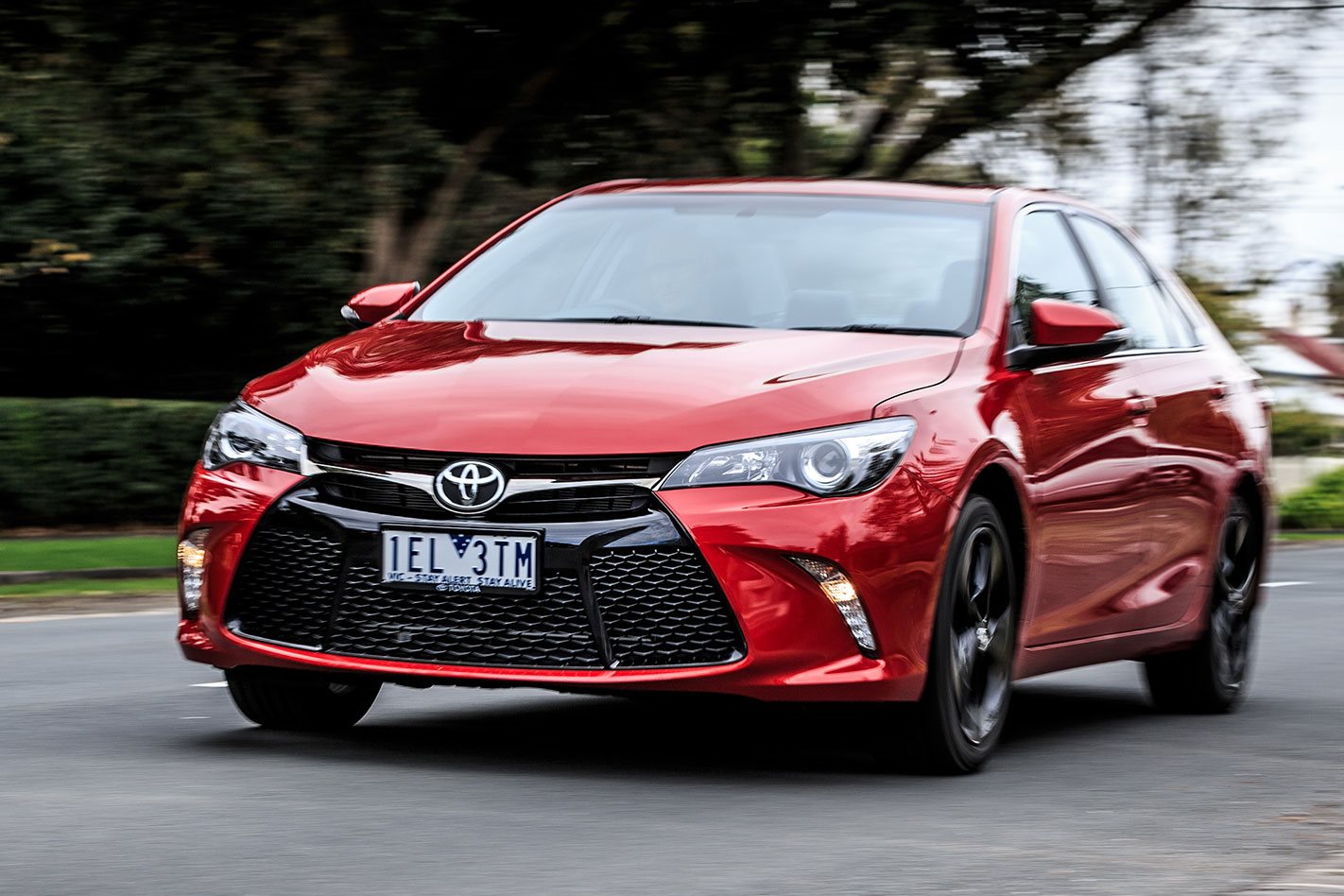 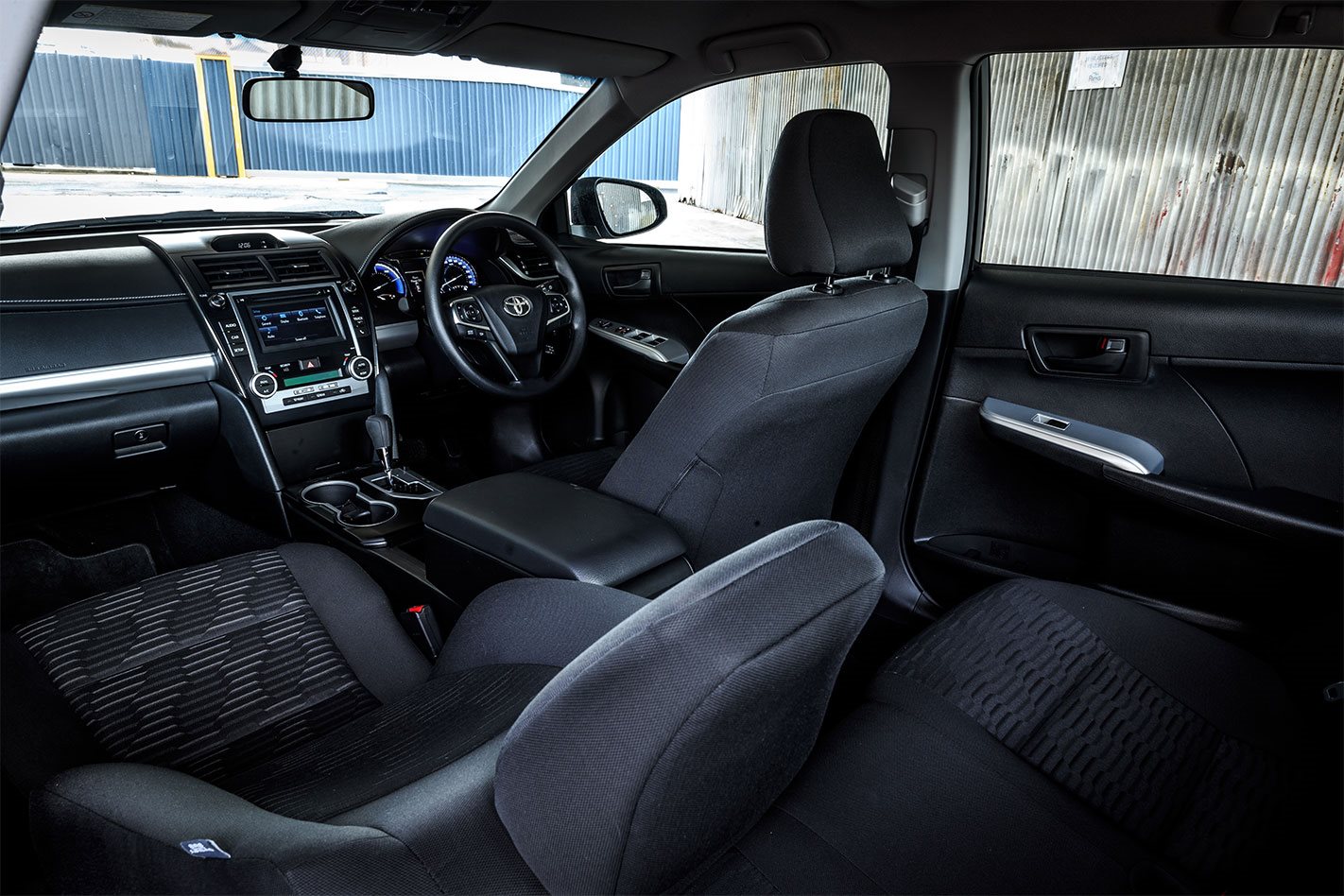 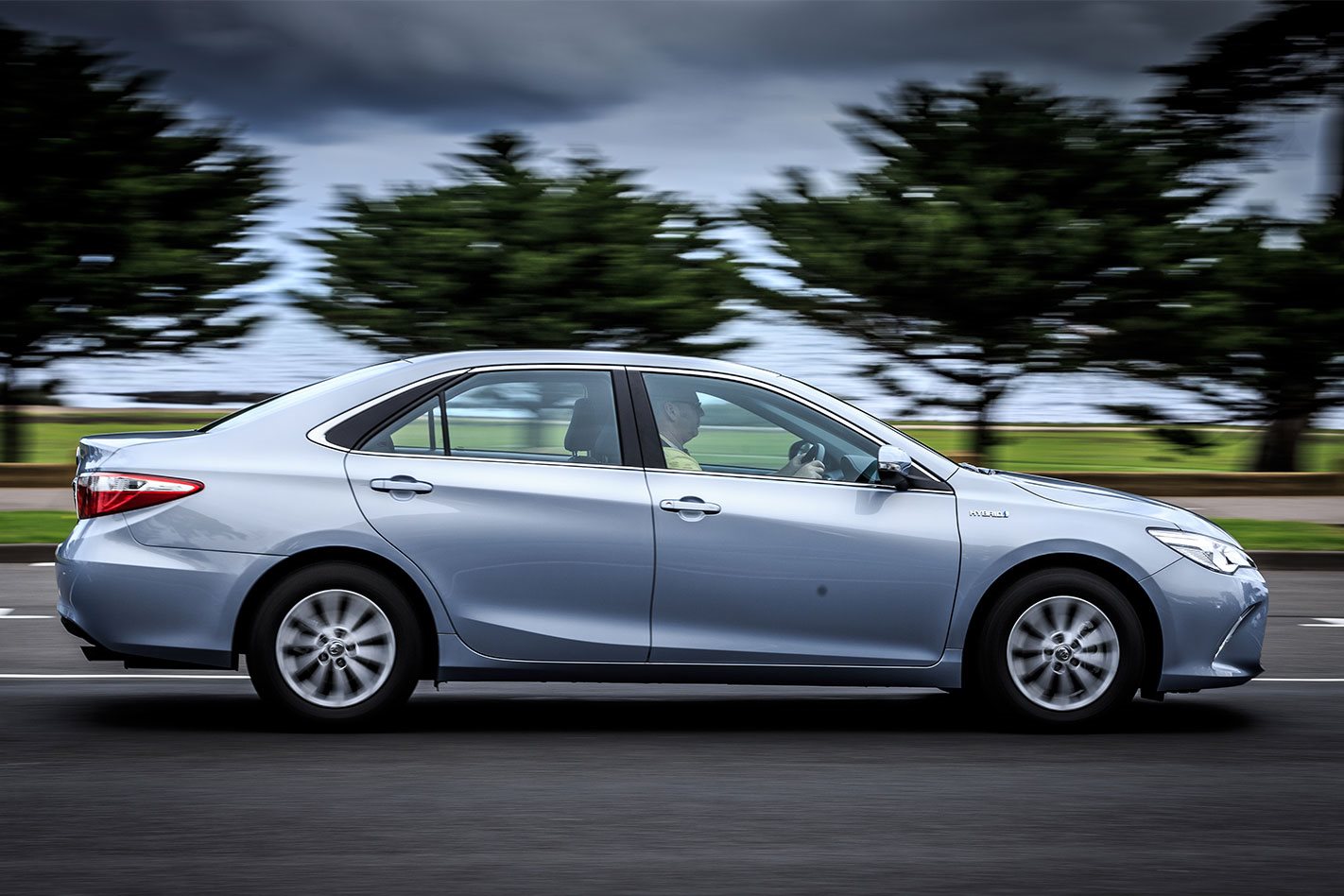 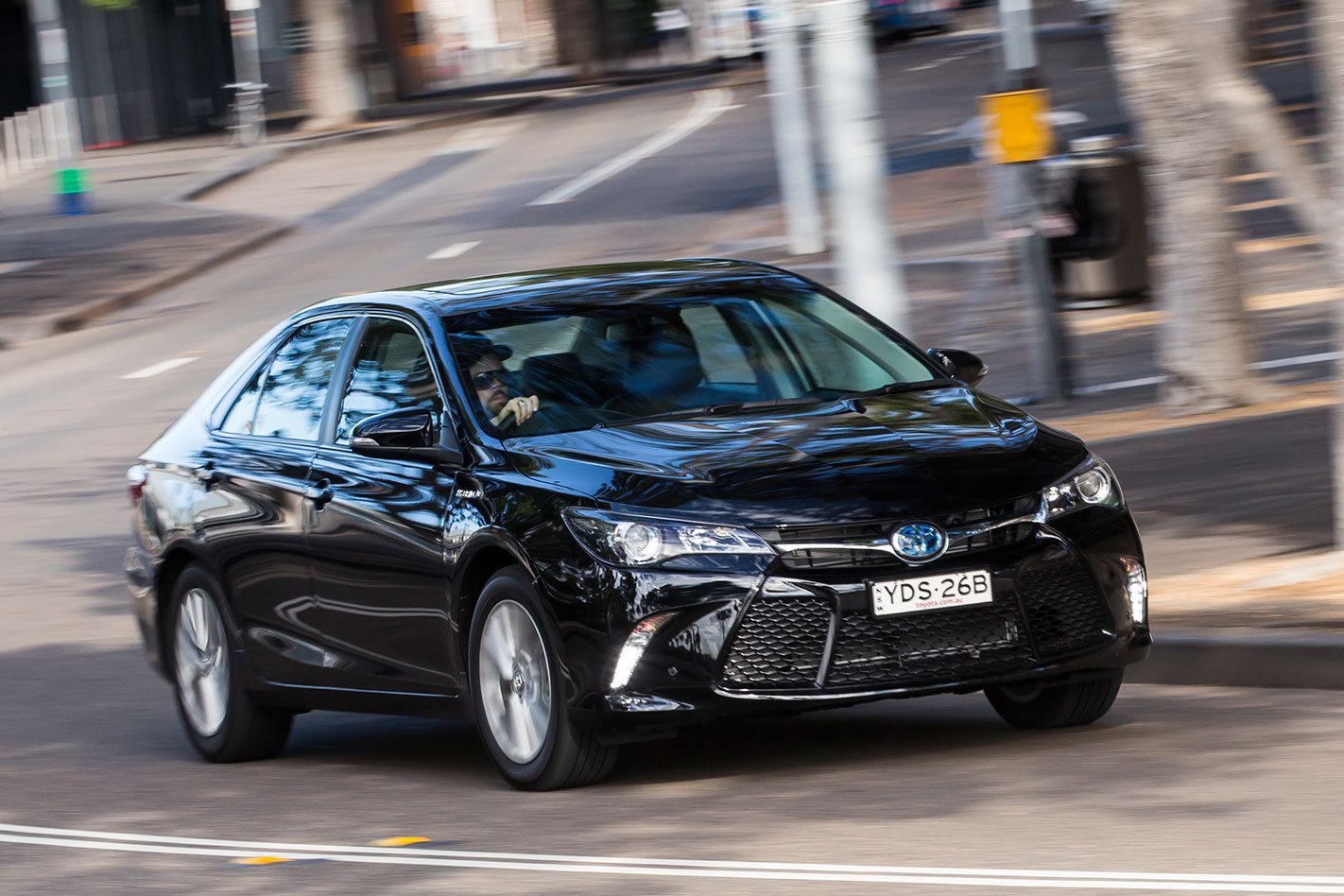 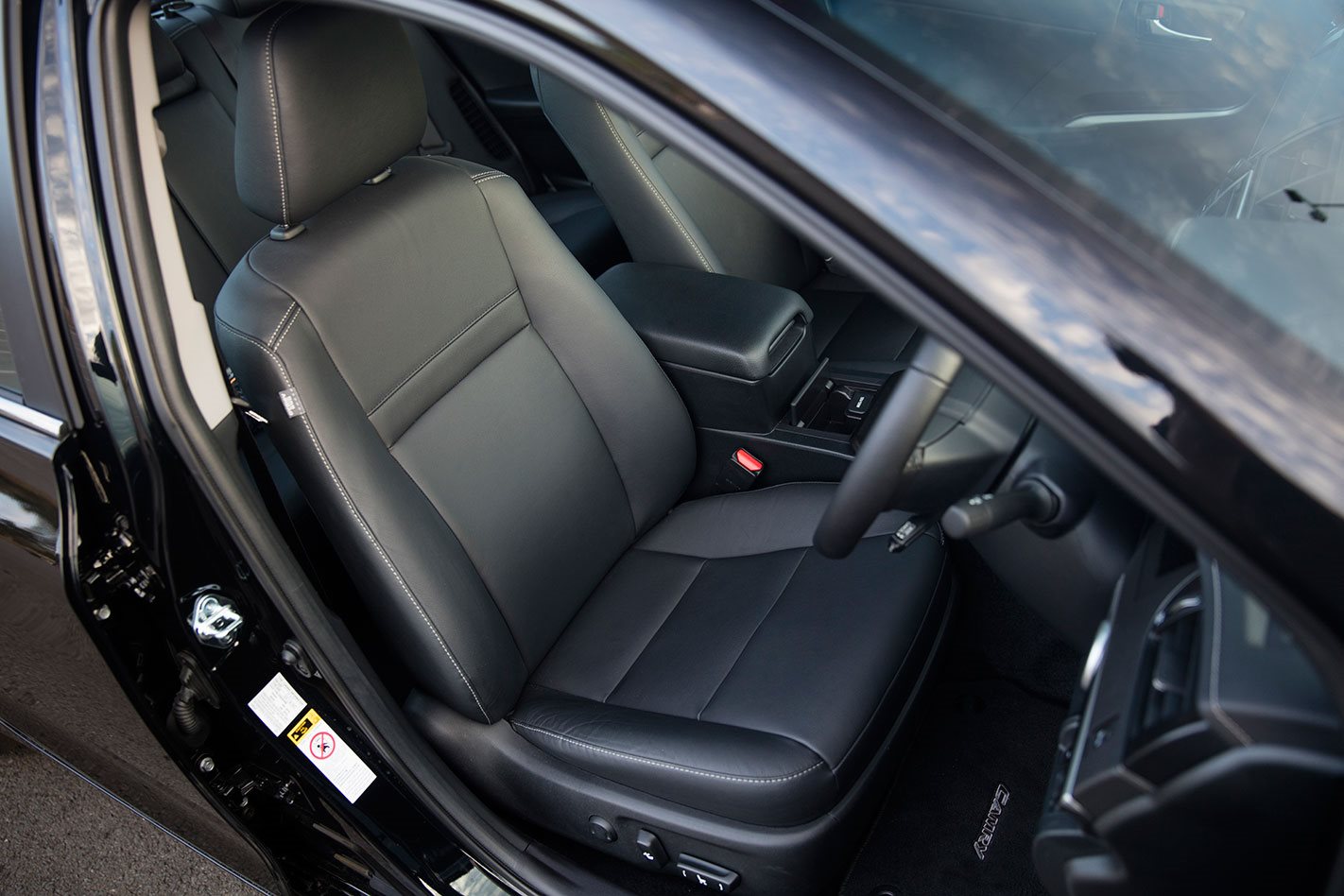 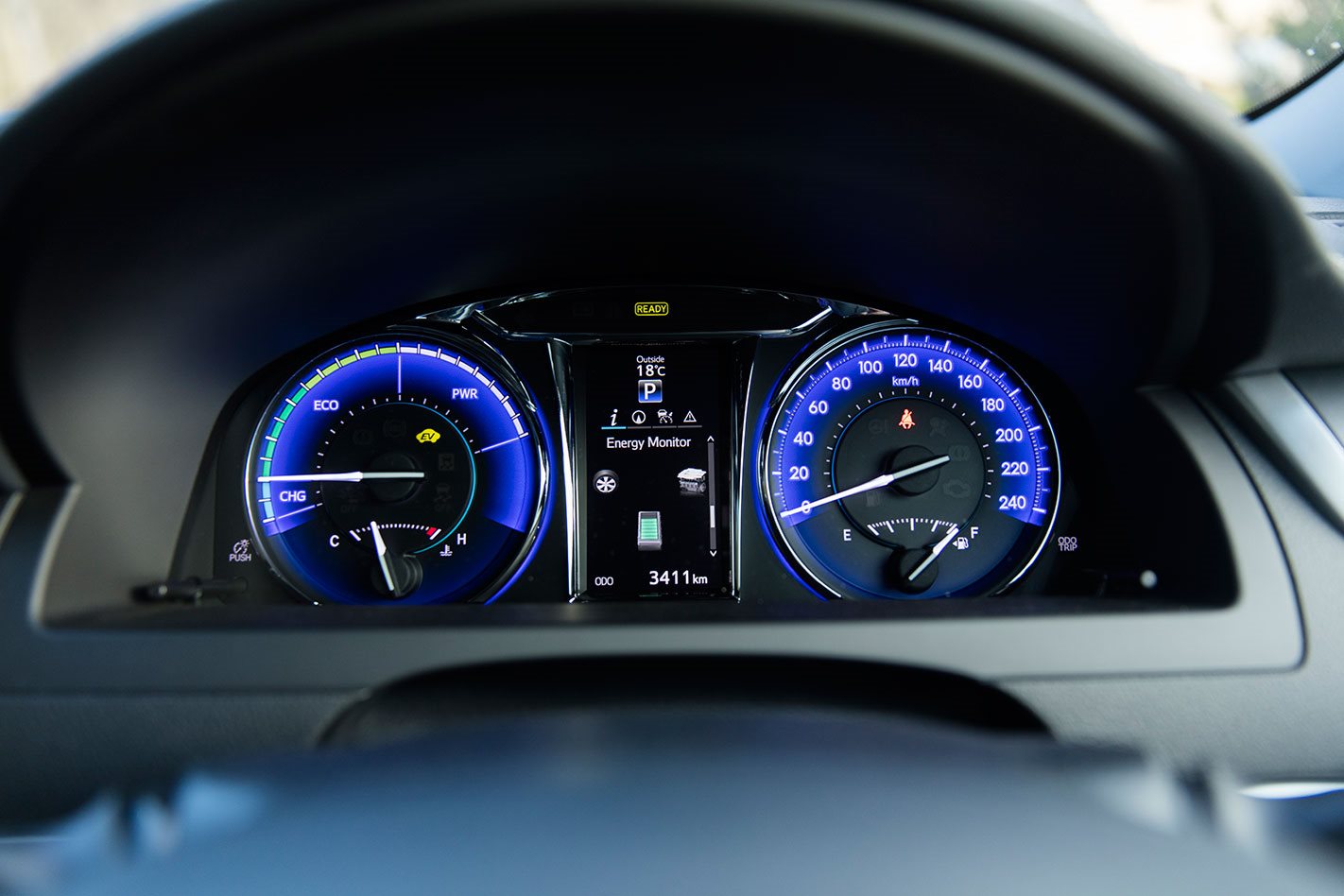 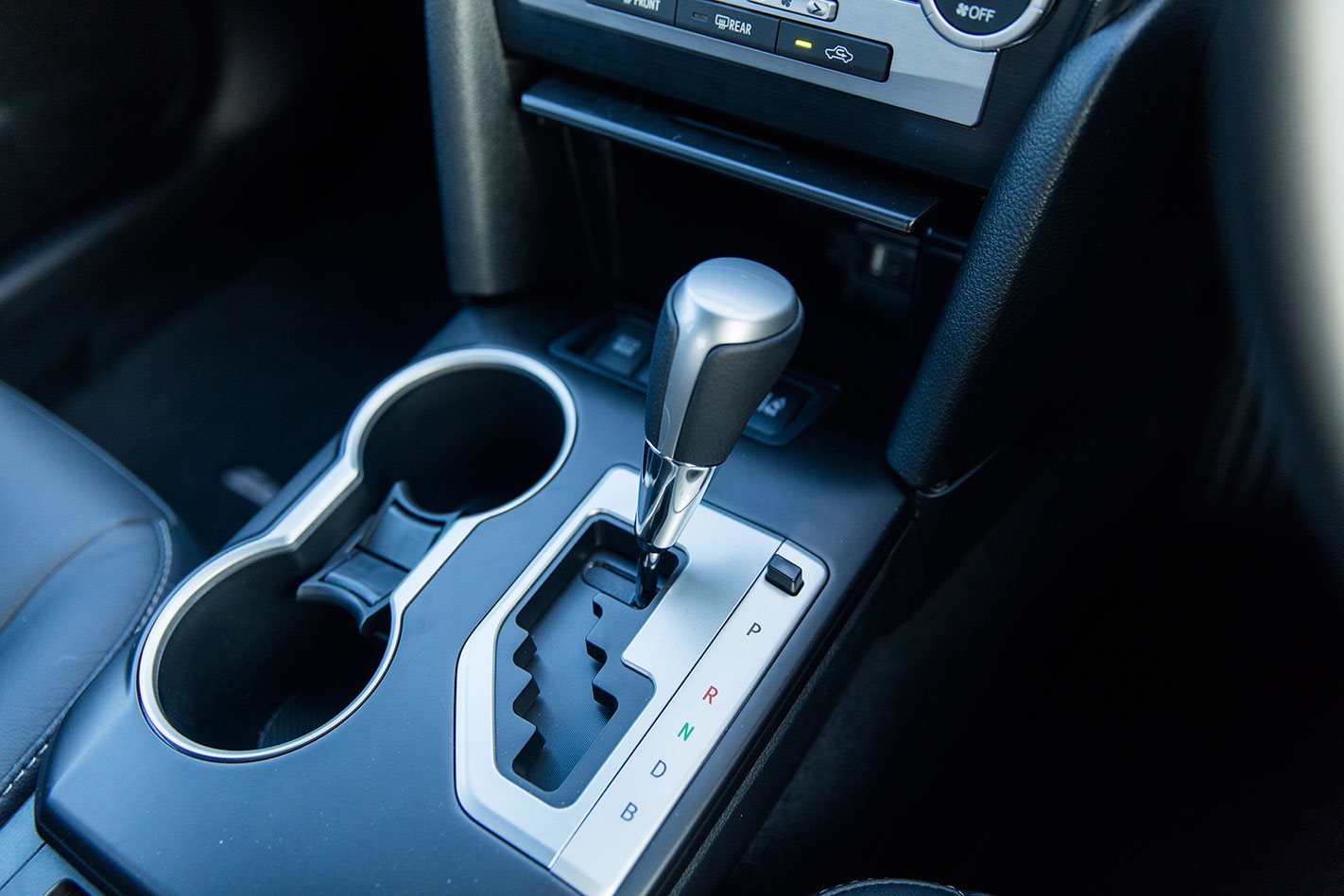 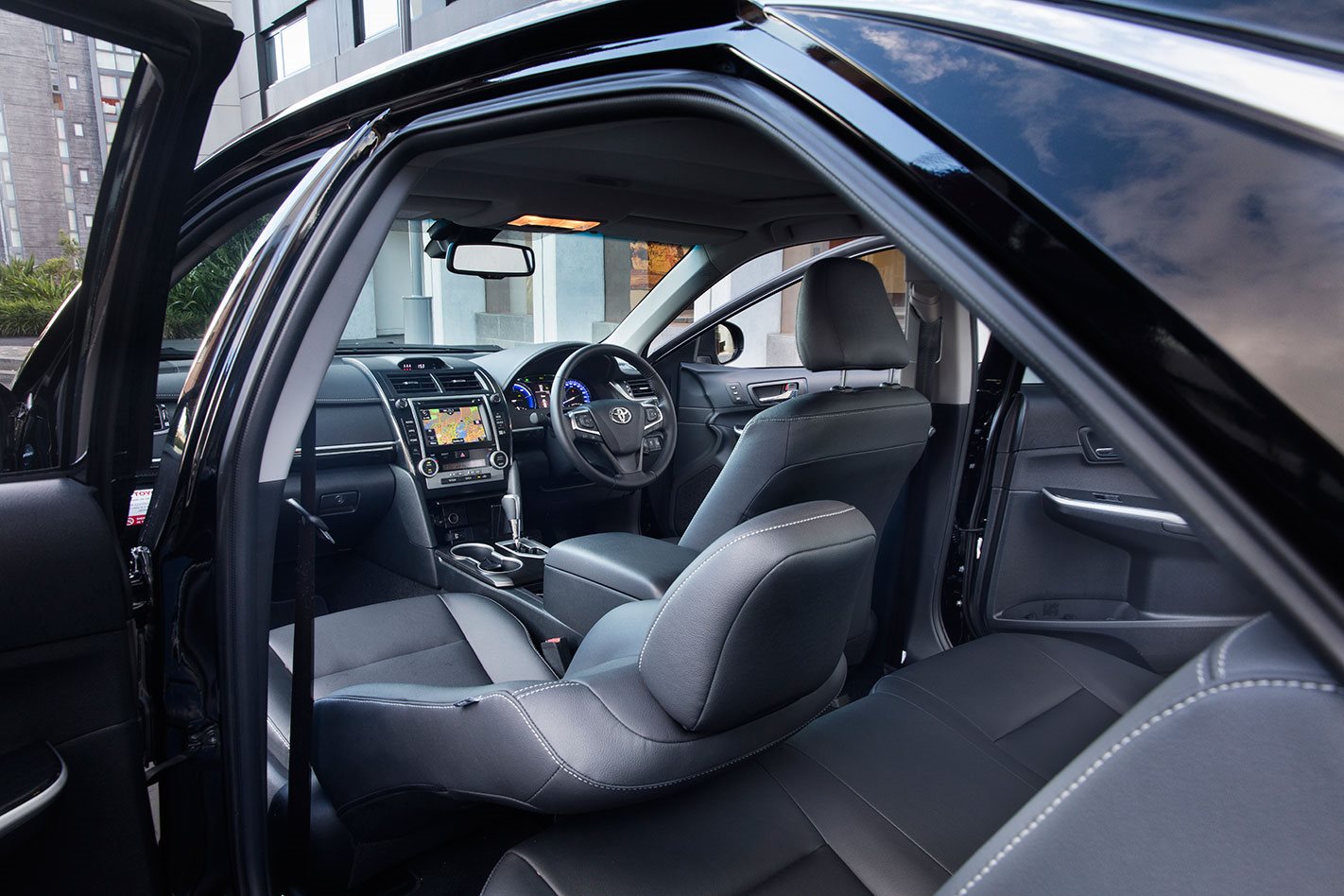 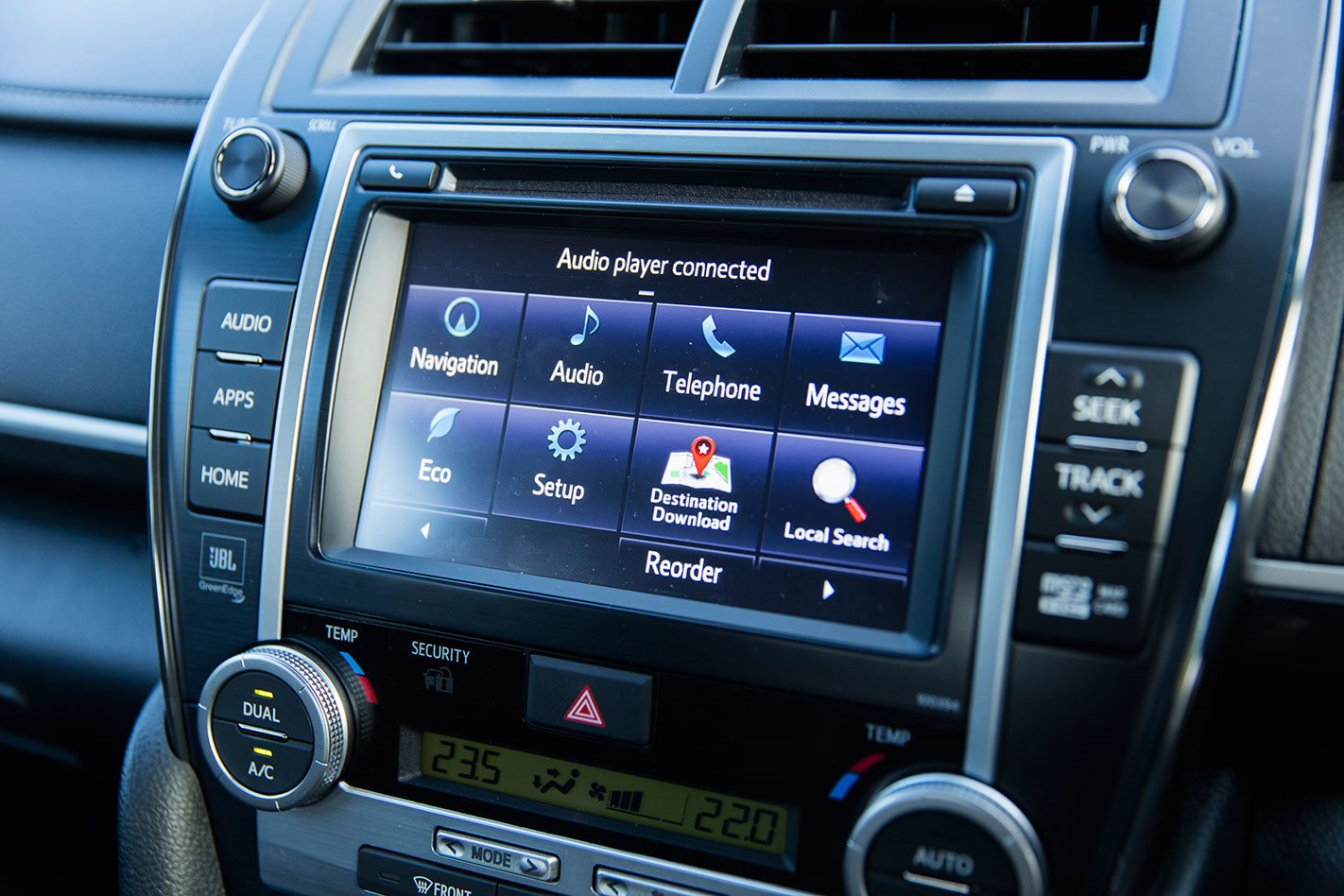