An Italian, winning the Targa Florio, in an Alfa Romeo; a testa di benzina’s dream that came true in 1923 when Ugo Sivocci conquered Sicily’s gruelling open road race at the wheel of the lightweight Alfa RLTF sports racer.

Sivocci’s car wore a green four-leaf clover symbol for good luck, and ever since his victory, Alfa Romeo racing cars have been adorned with the ‘Quadrifoglio Verde’ logo. And this Giulietta QV is the latest road-going Alfa to borrow some of that performance heritage and continue the tradition.

Alfa’s mid-engine, mini-supercar, the 4C, is designed to position a shimmering performance halo over the entire brand, and this upgraded and mildly face-lifted Giulietta QV will benefit from that reflected glory (not to mention some of the 4C’s hardware) in a renewed push against established hot hatch players like the Mini Cooper S, Ford Focus ST, and VW Golf GTI. 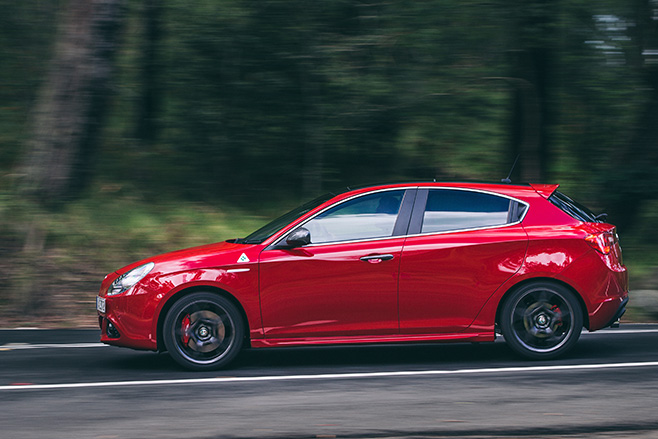 Centrepiece of the 2015 QV is an all-alloy, direct-injection version of the 1,742cc turbo four, stolen directly from between the 4C’s axles. Like the 4C, it’s matched with a six-speed dual clutch ‘box, while unlike the 4C, a six-speed manual is also available (although engine output drops by 4kW in that configuration).

A new intake system, imaginatively titled ‘QV Intake Engine Sound’, is claimed to amplify the engine note, and the Giulietta is launch control equipped for the first time in the QV.

Alfa spotters should look for ‘Quadrifoglio Verde’ emblems on the front guards, as well as gloss Antracite finish on the exterior mirror housings, grille, door handles and fog light frames. Inside there are revised instruments, a new flat-bottom wheel, redesigned front seats, plus a new 6.5-inch ‘Uconnect’ multimedia touchscreen is built into the dash. 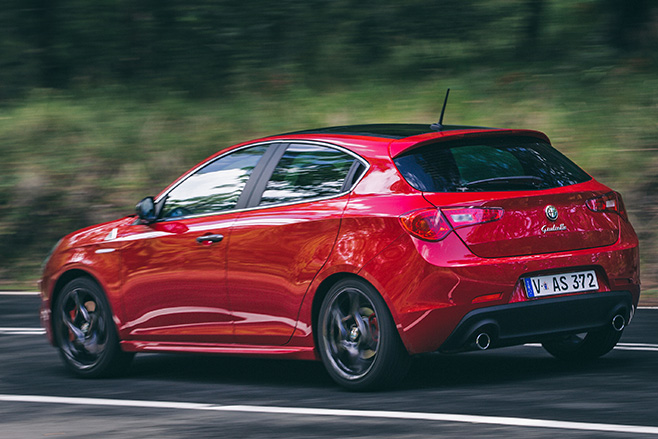 Launch drive for the new QV Giulietta took in large sections of the ‘old’ Pacific Highway north of Sydney towards the NSW central coast, and first impressions were dominated by the engine’s meaty thrust and pitch-perfect note.

Power delivery is impressive, but far from linear, with a distinct boost of intercooled turbo assistance coming on stream at 5,000rpm as revs climb towards the point of peak power (5,750rpm).

As the name implies, Natural is a default mode with stability and traction controls in full operation, DST (Dynamic Steering Torque) steering guidance (by braking) is enabled, and throttle response is ‘normal.’ Push the console switch forward into Dynamic and steering assistance is reduced, stability and traction controls are dialled back, and throttle response is sharpened.

The QV’s moderately lowered suspension maintains the car’s balance in quick cornering, with the nose remaining resolutely stuck to the tarmac, only starting a progressive push into understeer under extreme duress.

Braking is progressive and powerful, thanks to Brembo four-piston calipers up front, clamping 320mm ventilated rotors, and the DNA’s ‘Pre Fill’ function ensures the braking system is pressurised before the driver hits the brake pedal if it senses a hazardous situation. 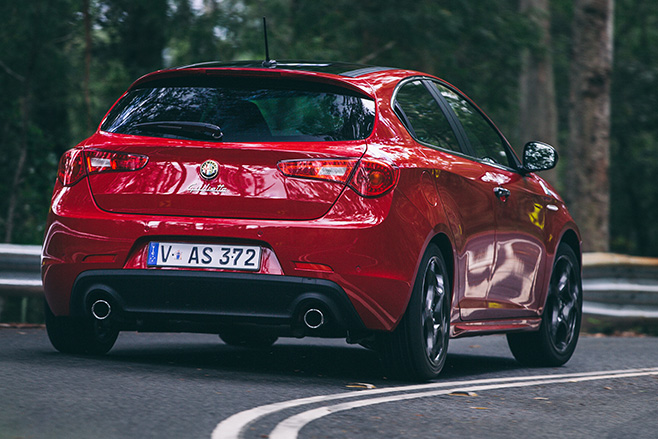 The QV picture isn’t all rosy, with design and dynamic niggles making their presence felt.

We found the driver’s seating position to be problematic, with the relationship between the pedals, seating hard points, and forward raked steering wheel, making it difficult to find an ideal set-up. For the record, this tester is slightly above average height (183cm) and weight (88kg), with roughly even trunk to leg proportions.

Casting a critical eye around the interior we came across numerous rough and/or sharp edges on plastic moulded parts. And while steering weight is fine, road feel isn’t where we expected it to be.

Last gripe centres on the standard Dunlop SP Sport Maxx TT rubber; impressively grippy, but surprisingly noisy on all but the smoothest surfaces. 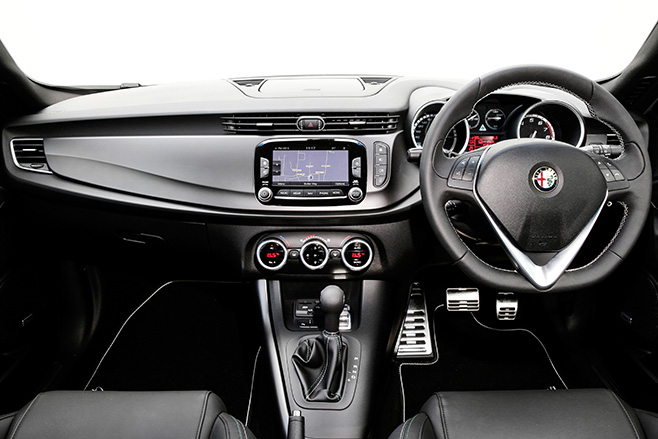 List price for the Giulietta QV is $39,000, and the example we drive was one of 50 ‘Launch Edition’ units (25 Alfa Red, 25 Matte Magnesio Grey) weighing in at $45,000, boasting carbon fibre mirror housings, carbon spoiler, plus a front air dam, rear diffuser, and side skirts in dark finish.

The ‘standard’ car is line-ball with the Focus and Cooper S, while the Launch Edition is in Golf GTI territory. Worth the coin if you’re after an ‘individual’ hot hatch option.

Would you take the Alfa Giulietta QV or the VW Golf GTI?

It’s closer than you’d think. The Alfa is quicker in a straight line (0-100km/h in 6.0secs v 6.5) and in base form undercuts the Golf by more than five grand. But the Golf has the edge in terms of dynamics and build quality. We’d go the Golf.

Click here to find out more about the Alfa Romeo Giulietta.