The first TT stunned the world when it was launched in 1998. It not only had a name that could be pronounced backwards or forwards, but was also stunningly beautiful and fast too.

Sure, the slipstream design meant the early ones tended to get loose and spear off the road at warp speed, but hey, they sorted that out pretty damn quick with a stick-on spoiler.

The second generation of 2006 was more modern but less adventurous and now the sharper third generation car is here.

It’s based on the Volkswagen Group Golf/A3 platform and is available locally with a single turbo four-cylinder 2.0-litre engine that uses petrol. Audi Australia could have imported a diesel version, but they realised people would have laughed and then thrown rocks. 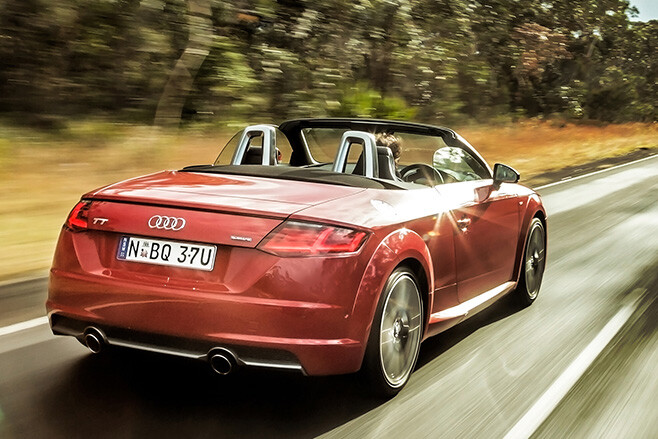 Because it is an iconic sportscar, that’s why. It is also the kind of sportscar you could live with day to day. That is unless you want to give a lift to more than one person. There are two extra seats in the back of the TT, but it is so cramped back there that Audi fitted a sticker warning against crushing the passengers’ heads when you close the boot hatch. Very small children might fit back there (in the rear seats, not the boot), but they would want to have slim car seats or booster seats. Most cats would also fit, although mine would probably be too big. He is very fat.

But if you don’t need to carry more than one adult or over-sized cat, the TT could actually be a very nice daily driver.

Look at it from the back or side and you may not immediately notice this is a new model.

But the front end certainly does look different with its new hard lines, more aggressive nose and sleek headlights.

The TT is basically new from the ground up compared to the last one although it follows the same formula. It is also 50kg lighter for a total of just 1230kg.

There is a bunch of new tech, including the first ever Audi Virtual Cockpit display, which looks like something from Iron Man. There is no analogue speedo and tacho, but a high-resolution screen that can be fully customised. It is way cool and can show a huge sat-nav map or lots of car information, with a small tacho and speedo. Alternatively, it can simply show the tacho and speedo just like it used to. It’s great because you can see everything you want and don’t have to look down to the centre screen.

The interior is new and it looks fantastic. Audi’s designers didn’t go crazy, but the design is both attractive and practical in equal measure. There are some lovely touches, such as the AC controller buttons on being fitted to the actual vents and lovely quality surfaces.

Something else new is the Matrix full LED headlights, which are available as a $2500 option. Audi promises they are 100 per cent free of Keanu Reeves.

Well, I wasn’t driving fast, your honour. But let’s say if I did, I imagine the TT would go pretty damn fast without breaking into supercar territory.

Remember, the hotter TT S version is also available and the regular TT leaves it a decent amount of room.

All of the TTs are quick and fun, but the AWD is a lot more engaging.

The front-drive car does tend to tug through the wheel a bit on acceleration and is a bit more prone to wheelspin (which is snuffed out quickly by the on-board computer). Even in the dry, the AWD car puts its power down better and this is only likely to be more evident in wet or slippery conditions.

The engine pulls hard all the way through to just above 6000rpm and sounds a little bit rorty, without being too raucous. You can do the 0-100km/h dash in just 5.3 seconds if you engage the cheaty launch control. That is mighty fast, but to be honest, ours didn’t feel quite that fast.

Cornering is fun and the TT is well tied down, but is also quite comfortable too.

Adjustable electric charged magnetic dampers are available as an option, if you want to get a bit more sporty.

The shape of the TT’s tail means its rear visibility is wretched, which makes it a perfect candidate for a reversing camera. It’s a pity then that a reversing camera won’t be available until later this year. It does have reversing sensors at least.

If you hate parking lots, then you might like the $2200 Assistance Package, which helps you park, stay in your lane and see if anyone is lurking in your blind-spot.

The TT has a variable steering rack, which doesn’t change according to speed (like some systems), but does alter the steering rate depending on the position of the wheel.

This takes some getting used to and it’s easy to turn too much or too little when pushing hard. The steering also feels a little vague. You can change the weighting, but the heavier Dynamic mode is far better for pushing than the other modes.

Audi has done a cracking job with the seats, which feel supportive and comfortable.

The Sport models sit on 18-inch wheels, while the S-Line models get 19s, a body kit, some extra metal interior trim and other elements as well as a beefier sound system.

Well, the steering isn’t perfect and the front-driver isn’t as good to punt quickly as the AWD, but the TT does what it promises. No, it isn’t a hardcore sportscar weapon, but it is pretty quick and looks lovely.

There is the issue of the rear seats, which don’t actually don’t seem to exist when you try and get into them, but hey, it’s a sports coupe.

Oh, I nearly forgot: the automatic transmission changes up when it wants, even when you have selected the manual mode. This makes me very angry and sad at the same time.

Did I mention this is an Audi? I did, and that means you are going to pay a bit over the odds. But when you consider the design, the performance, the badge and all the technology, the TT isn’t bad value.

If you have bundles of cash spilling out of your pockets, feel free to lash out on the S Line, for the extra kit.

Would you take the TT or Nissan 370Z coupe?

I’d still take the Nissan if I want to go as fast as possible, but the TT is not slow, has a heap more cool stuff and is easier to live with.

Click here to find out more about the Audi TT.