If you want graphic, slap-in-face evidence that a Mercedes Benz is no longer just a car brand bought by bankers and corporate tycoons, you’ll find it here in the form of the A45 AMG. Hot hatches don’t come any faster or more furious than this, and its target market is clearly a 30-something high earner with flash trainers and a hip haircut, not a portly executive in a pinstripe suit.

This is the facelifted, 2016 version of the model first launched locally in late 2014, and brings key changes to engine output and equipment. Just about every major manufacturer offers an engine with fundamentals common to that in the A45 – 2.0-litres, four cylinders and a turbo – but none can touch the Merc for output, nor the manic performance it endows here. It now makes a whopping 280kW (up 265kW on the original) and drives all four wheels via a fast-shifting dual-clutch transmission with seven ratios and two modes. The facelift also brings adaptive dampers, which give you the option of softening the ultra-firm suspension tune around town. 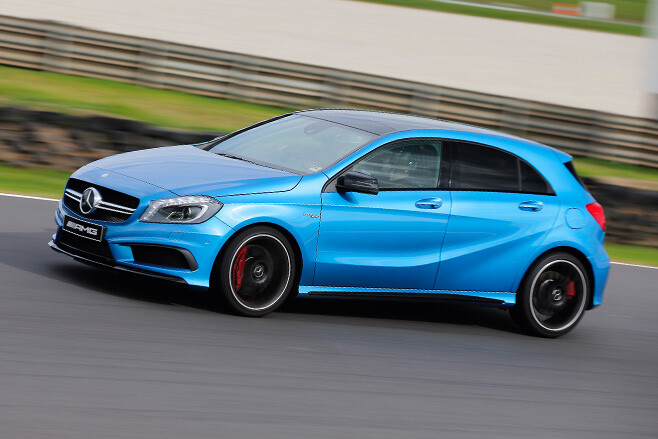 Driving the A45 AMG hard is enough to make you feel you’ve been put in charge of a World Rally Championship car and have been sent out on a tarmac stage. The savage power hit is channelled to all four contact patches of the wide, high-performance tyres, so there is no wasteful wheelspin, just tenacious traction and eye-widening acceleration. There are four driving modes to choose from, or you can create your own customised setting from the various parameters controlling suspension stiffness, steering weight, throttle responsiveness, transmission shift speed and the level of electronic intervention handed out by the stability control system. Set to its most aggressive modes, the steering feels meaty and direct in your hands, there’s barely any roll into corners, the entry speeds it invites you to probe start to reach holy-crap stage before the front end finally start to telegraph messages that there’s not much more to give. Then you need to recalibrate how early you can get back on the power mid-corner; the traction delivering by the all-wheel drive system and the clever apportioning of torque is stunning, so while it’s utterly resolved and predictable, it’s never dull or one-dimensional.

Even in Comfort mode, the suspension is very firm and the resulting ride is never what you’d call plush. There’s just enough pliancy to cope with city streets and battered bitumen, but the suspension’s travel moves in short, fast strokes that makes the car very reactive to surface changes. The AMG A45 charges a hefty premium for its heroic performance, and it expects you to be man (or woman) enough to live with the compromises that come with such a single-minded focus. But the exhaust note can be turned down via a console switch, and the Comfort mode also sees the transmission upshift early around town to make progress easy, quiet and relaxed. There are also no sacrifices that need to be made in terms of equipment levels and standard safety features. Audiophiles will love the punch, power and clarify of the Harman Kardon audio system, and the extensive menus of vehicle set-up options, including the ability to change to colour of the interior lighting. Likewise the support of the electric front seats, and the feel-good factor of the alcantara-finished steering wheel. The overall design and presentation of the A-class’s cabin is a bit more shouty and overt than that of rival Audi and the restrained elegance and ultra-premium interior of its RS3, but these things get a bit subjective and become a matter of taste and preference.

At $75,800, it’s a huge amount of money for a hot hatch, but it needs to be viewed in context of the performance it delivers, and its rivals. From BMW, there’s no direct opponent for now; closest is the M135i, and it asks for $62,510. Audi has a challenger that goes pretty much head to head in the form for the five-cylinder turbo RS3, and it’s actually a little more expensive, at $78,900. Start to factor standard versus optional equipment and the comparisons start to get murkey and a bit pointless, as buyers at this end of the market will usually add another 10 percent (at least) in options and won’t quibble over a few thousand here or there to spec the ultimate performance hatch.

And for now, at least in raw numbers and sheer point-to-point pace, the Mercedes-AMG A45 holds the crown.

Click here to read the full review on the Mercedes A45 AMG.