Which of these higher-grade 4x4 SUVs offer more bang for your $70,000-plus bucks? Introducing the Toyota LandCruiser Prado, Land Rover Discovery and Ford Everest.

SUV sales in Australia continue to grow and while much of the broader segment is centred around the more affordable soft-roaders, there’s still plenty of demand for large, turbo diesel, four-wheel-drive vehicles that will do everything from daily school run to outback adventures.

The Prado VX diesel and Everest Titanium are similarly priced at $75,190 and $76,705 respectively, while the Discovery TDV6 Graphite comes in at $70,496. However, if you add the optional reversing camera, leather upholstery and third-row seating to the Disco, which are standard in the others, it ends up costing $75,286.

The Prado VX is the only one that has heated rear seats and a digital radio tuner. 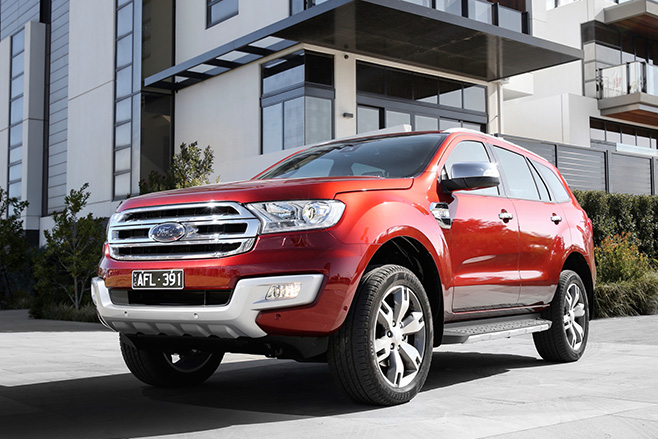 All three are very roomy. The Everest and Prado come with seven seats as standard, but while the Land Rover TDV6 Graphite has space for a third row, an extra bench is a $2780 option.

The Everest’s driver’s seat is very comfortable, but you sit lower and further back in the cabin than you do in the Prado and Discovery. This feels nice on the road, but your all-round vision off-road is not as good as the others.

The Discovery has the only second row seat that will fit three adults with ease and unlike the other two, the third row, if fitted, will comfortably seat two adults and not just kids.

The Everest has good cargo area even with the rear seat up. The Prado has a big luggage area, but third-row seats that fold down into the floor do eat into the overall cargo volume. It can’t match the Land Rover Discovery’s cavernous luggage space but it gives you as much storage room as the Everest.

The Discovery has a particularly comfortable cabin with superb seats and great vision for everyone. Its space-efficient box-like body gives it huge load-carrying ability, and the middle and third-row seats fold to provide a completely flat floor giving to turn it into a pseudo-van. The second- and third- row seats also fold individually, so that the load space can be tailored to what you are carrying.

The Ford Everest has the same excellent 3.2-litre five-cylinder turbo diesel engine found in the Ford Ranger ute with an official combined-cycle fuel economy rating of 8.5L/100km – though we found this to be  11L/100km in real world conditions. Mated to a six-speed automatic gearbox the 143Kw/470Nm engine gives effortless performance for most driving but could do with more overtaking power. Towing capacity is 3000kg

The Prado’s 2.8-litre, four-cylinder turbo diesel engine produces 130kW/450Nm. It’s the smallest of the trio and it shows with modest overtaking performance. Fuel economy is a bit less than the Ford Everest –  7.9 litres/100km combined and 10.5L/100km real world. The VX only comes with a six-speed automatic transmission, and its 2500kg towing capacity is the lowest of the three.

The Land Rover Discovery 5 TDV6 has a 3.0-litre six-cylinder diesel turbo pumps out 155kW and has 520nM of torque with published fuel consumption just a little more than the Everest at 8.8 litres/100km combined and 11L/100km in our real world testing. Mated to a sophisticated eight-speed automatic transmission, it’s an effortless performer in all conditions. The Discovery also has a class-leading 3500kg tow rating.

One important factor in this category is fuel range, and it’s here where the Prado excels. The VX has an 87-litre fuel tank plus a 65-litre auxiliary tank which almost doubles the  82.3-litres and 80-litres in the Land Rover and Everest. Going by our real world fuel figures that 150-litre capacity gives it non-stop Gold Coast to Townsville capability of 1428kms, compared to the Land Rover’s 748km and the Everest’s 727kms – that’s plenty of extra peace of mind for when fuel stops are few and far between. 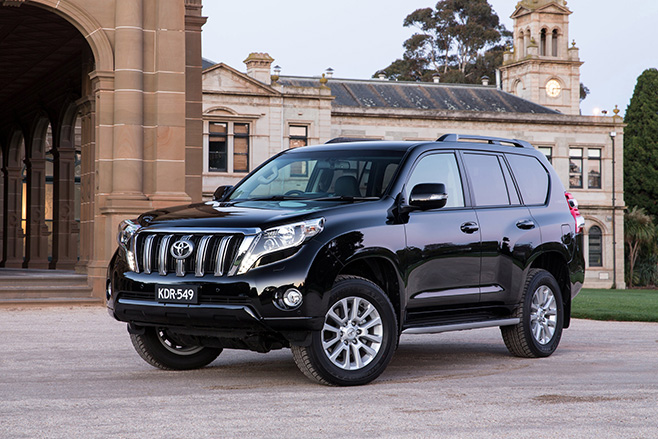 The Ford Everest is based on the Ford Ranger Ute, which was developed in Australia and while its ride and handling is even better than the ute it’s not as refined as most other passenger SUVs. That said it’s comfortable on good roads and very capable off road.

The Prado is very comfortable as a day-to-day family car, but it is built extra tough and is one of the best choices for long trips. Its Kinetic Dynamic Suspension System (KDSS) provides a comfortable ride and it’s very quiet even on the worst roads.

The Land Rover performs smoothly in the rough stuff without compromising its comfort and handling on soft roads.

All three are great to take off the beaten track. The Everest comes with trailer-sway control, full-time 4WD with high and low range and electronic traction control with rear differential lock to help maintain drive in very rough conditions. It is capable and competent in difficult off-road conditions, where its standard rear diff-lock will be appreciated.

As you’d expect the Prado VX IS well kitted for the rough stuff with electronic traction control and KDSS, which adjusts handling to suit on-and off-road conditions by automatically adjusting the tension on the suspension’s anti-roll bars. The Prado is a genuine off-roader that’s only matched by the other two vehicles in this comparison and its big-brother the LandCruiser 200 Series.

Meanwhile the Land Rover has height-adjustable air suspension, which lets you raise the car for off-road use and lower it more than standard for tight spots such as overhead carparks. It also has electronic traction control, active roll mitigation, hill descent control and hill-start assist, trailer sway control, and Terrain Response, which automatically adjusts to different off-road surfaces. 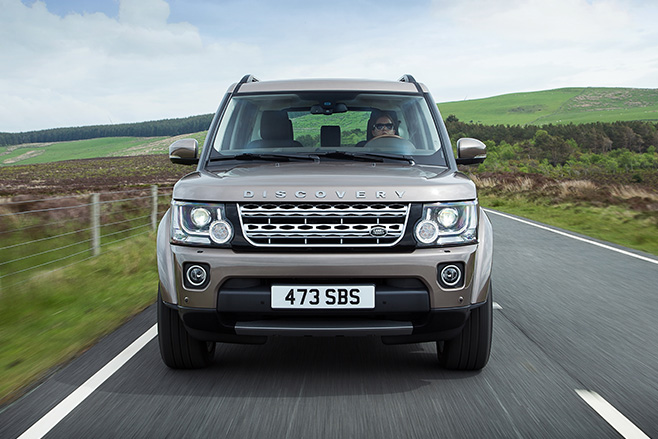 The Everest handles better than most ute-based SUVs, offering sharp and responsive steering without suffering excessive body roll in corners. It’s full-time 4WD system is a bonus on wet or icy bitumen, or on loose gravel roads, and particularly when the road conditions are frequently changing from wet to dry.

The Prado is not for drivers who like a car with responsive steering and nimble handing. It’s too high-riding and heavy for that, though the KDSS eases the body roll that the soft, long travelling suspension causes in lower-spec models.

The Discovery on the other hand steers and handles like a smaller car and out on the road feels sporty and nimble compared to the other two. The height-adjustable suspension works well here. The low on-road ride height helps stability, and yet you can still jack up the car for off-road use.

Make no mistake, these are each excellent vehicles to take on everything from daily driving to remote exploration. The Explorer Platinum offers great value in terms  of equipment and all-round capability, and you can’t fault the Prado VX for range, comfort and off-road capability.

However, the Land Rover Discovery TDV6 Graphite has the edge because it makes no compromises between on- and off-road handling and scores higher for general refinement and practicality. While it’s the cheapest it’s not the best value, as the other two have a lot more standard features, however the $5000 price difference will buy you a few optional bells and whistles.