TELL ME ABOUT HIS CAR

It’s capable of delivering outstanding supercar duality of character: hushed cruiser with the roof up; barking, corner-blazing beast when the time and place are right.

• Clever construction keeps the Spyder feeling nearly as stiff as the coupe; vital in an ultra-high-performance car like this.

• With the roof up, the Spyder suffers negligible wind noise, and sounds only marginally louder inside than the coupe.

• The engine delivers a vast band of useable performance, and sounds brilliant when working hard. 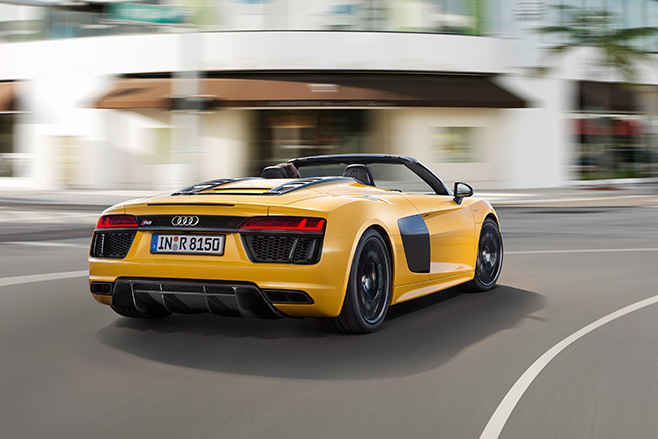 • The seven-speed dual-clutch gearbox responds instantly to shifts from the wheel-mounted paddles.

• A switchable sports exhaust system is standard, so the driver can run the engine in a more muted mode when cruising, or press a button to open flaps and allow a full-throated bellow when driving hard.

• A separate Dry Performance mode gives an even more aggressive throttle and transmission setting, and reduces the intrusion of the stability control system, allowing keen drivers to slide the car a little.

• The cabin has an elegant, driver-focussed design, and exudes high quality and excellent equipment levels.

• Occasional low-speed transmission/ driveline shunt. In the Comfort mode for engine and gearbox, kickdown can be slightly hesitant.

• Extra weight is inevitable with soft-top variants, and this does dull the car’s responses slightly compared to the coupe and requires extra braking distance when driving hard. 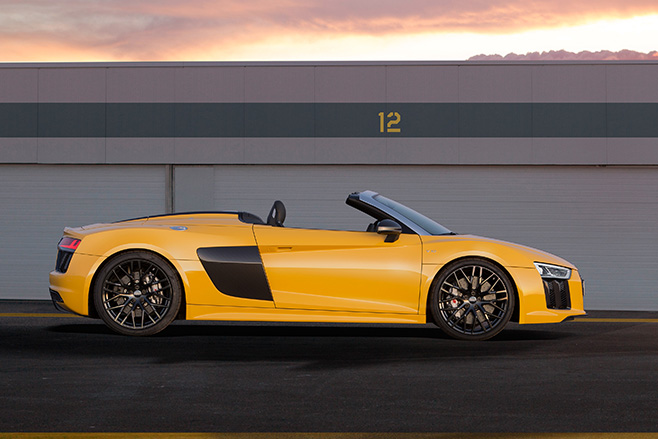 • By not employing turbochargers, the engine needs revs to produce torque, so can feel comparatively languid when asked to pull from low engine speeds.

• The shape of the front bulkhead means passenger legroom, even with the seat in its rearmost position, is not huge.

Porsche’s 911 Turbo S Convertible is even more demonically rapid in a straight line, thanks to twin turbochargers, but this muffles the all-important exhaust note. Has useful rear kiddie seats, which the Audi lacks, but doesn’t cut the same supercar figure.

Ferrari’s 488 GTB Spyder is also faster, but more expensive, and the waiting list is long. Or there’s Ferrari’s California T for similar money, but it’s front-engined, and not as a sharp as the mid-engined Audi.