Ask Porsche anything about its large SUV offering and it will simply stare at you blankly because, according to the iconic German manufacturer, it is solely a purveyor of sportscars. Whether they happen to take the form of a rear-engined, rear-wheel drive two-seater convertible or a high-riding four-wheel drive with five seats and a big boot, they are all sportscars, it says.

So when it comes to the third-generation Cayenne, in addition to all the features and attributes of any large SUV, Porsche’s contender must also be graded on its ability to put a smile on the driver’s face, while hauling people and things during its more pedestrian duties. Too much to ask?

With reputation as prestigious as the Porsche brand and a line-up that reaches right into the half a million dollar range (and occasionally beyond), you might be surprised to hear the Cayenne has a starting price of $116,300. With a bigger budget, the Cayenne S and Cayenne Turbo open up an entirely different realm of high-performance SUVs, but let’s focus on what the most affordable version has to offer. 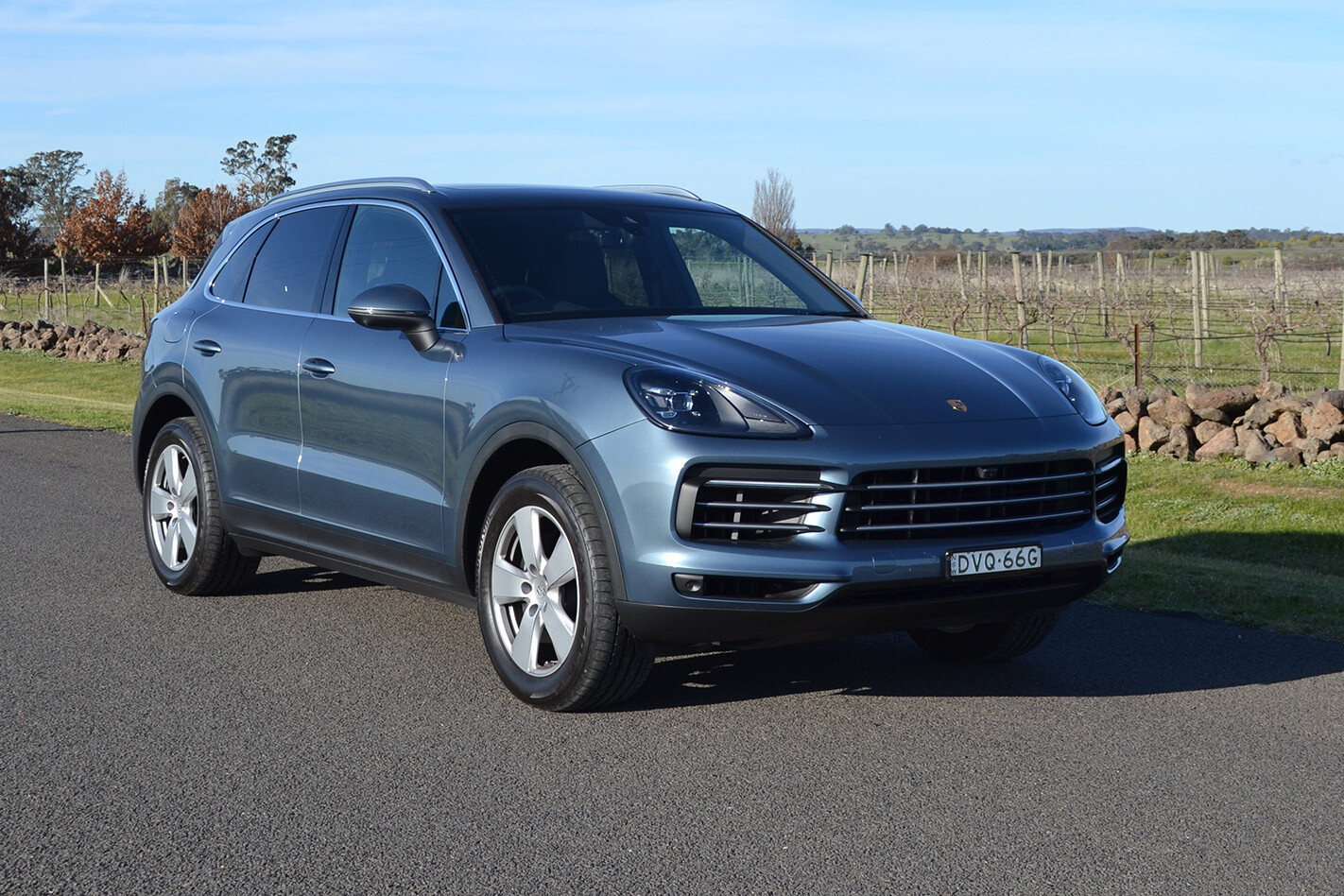 While that’s still a serious investment for many customers, it is at the most affordable end for entry into the Porsche owner’s guild and there’s a lot up for grabs beyond the Stuttgart badge. Even in this – the entry version – you get a 3.0-litre turbo petrol V6 with typical Porsche power, a clever four-wheel drive system that manages the way drive is sent to each wheel both on and off-road, and an understated but sharp cabin with room for up to five.

No diesel is currently on offer in the range, which will disappoint owners looking for a more fuel economical version or a luxury SUV that will tow frequently, but during our time with the Cayenne, its petrol V6 used an average of about 10.0 litres per 100km.

Our car had a few options thrown at it, which took the entry price up to $134,510 but, as is typical of the brand, the sky is the limit when it comes to customisation and personalisation, and that figure is easy to exceed. 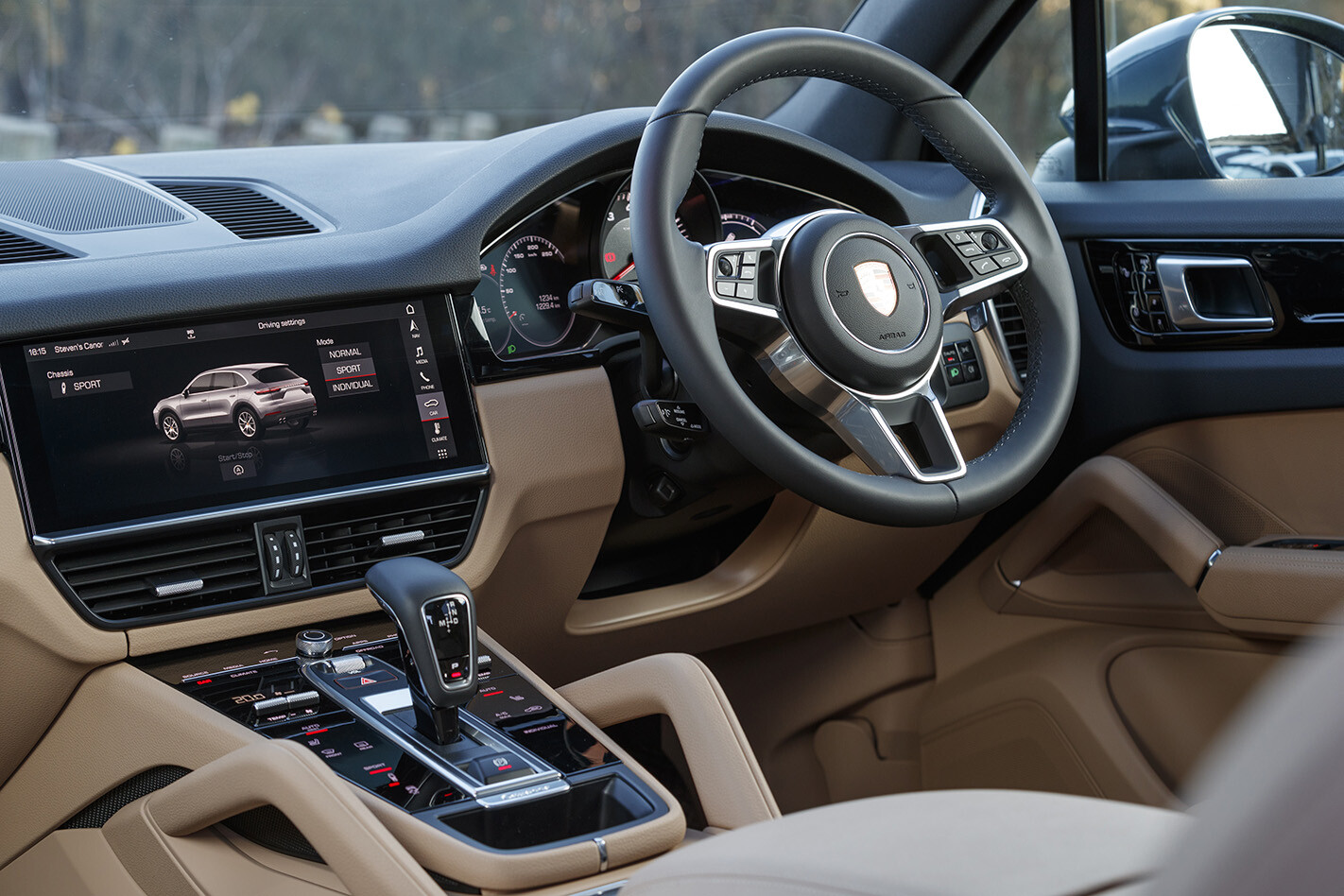 It’s rare that a Cayenne customer takes delivery of a ‘standard’ example with most choosing something from the options list, but if you do resist the temptation there is still a decent list of inclusions.

Leather upholstered seats with 14-way electric adjustment for the front, 19-inch alloy wheels and an eight-speed automatic transmission are all standard, while there is a good selection of technology features including a large central touchscreen measuring 12.0 inches. Navigation uses information about the road ahead to plan a faster or more efficient journey depending on the preference, while smartphone connectivity allows Android Auto and Apple CarPlay compatibility.

Measuring nearly five metres in length and almost two metres wide, the Cayenne is a large SUV and offers plenty of space inside as a result. Both rows of seating offer a comfortable place for two adults or three in the second row for shorter journeys. With a lofty 1.7-metre height, there’s also the head room to match for all too. 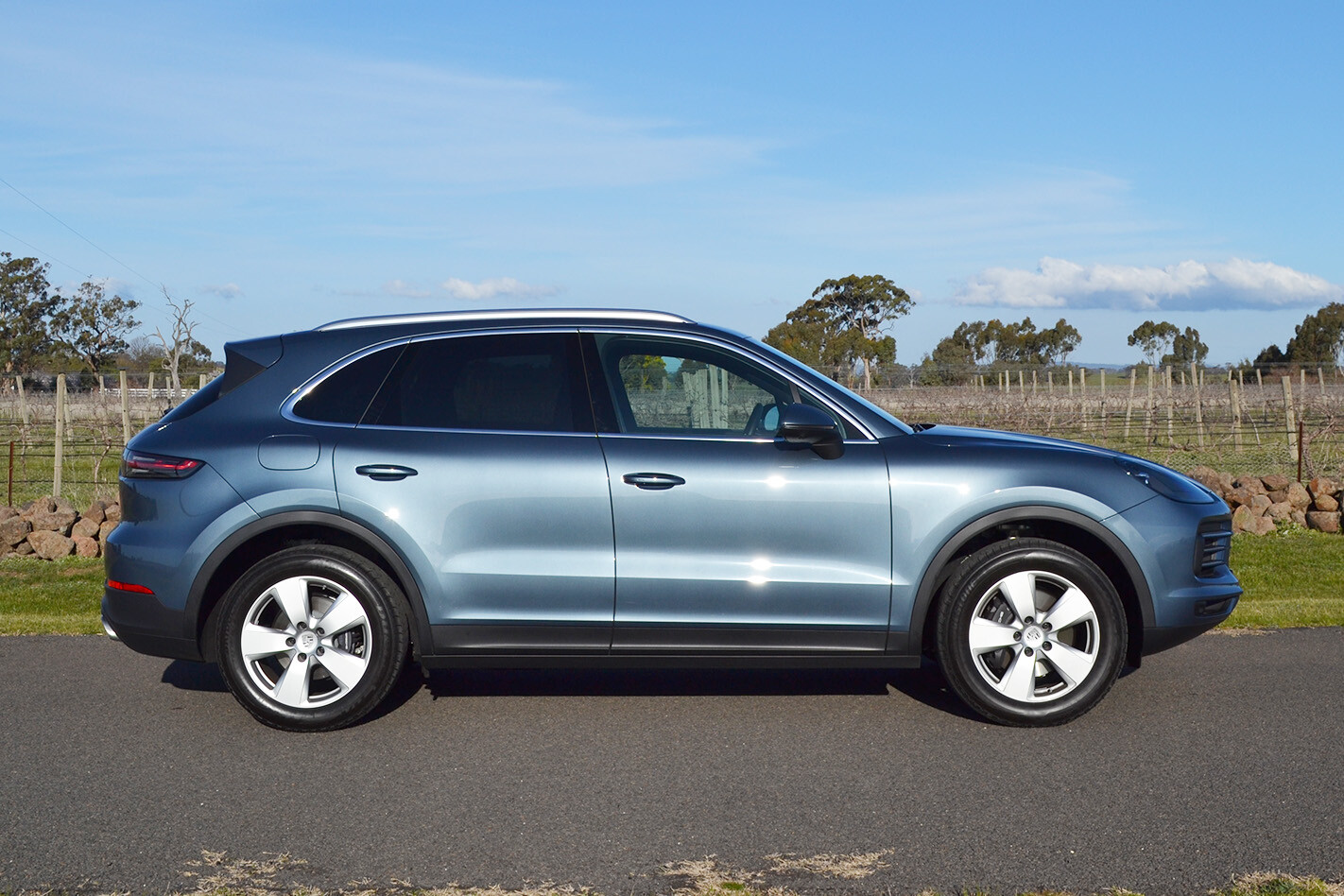 While some large luxury SUVs including the Audi Q7, BMW X5 and Mercedes GLE offer a boot space that can be temporarily sacrificed for a third row of seating and two more occupants, Porsche left the Cayenne length un-stretched in the name of driving dynamics. It’s therefore only available as a five seater.

With 770 litres of boot space, the Porsche’s elegant lines and profile do not compromise load area practicality, but if that isn’t enough, split folding rear seats expand that figure to 1710 litres. For comparison, A BMW X5 has a 650-litre boot that expands to 1870, while the Audi’s boot enlarges to nearly 2000 litres.

As you might expect from a high-end German manufacturer, safety technology is as sophisticated as the systems controlling entertainment and drivetrains. LED headlights not only look great with signature Porsche four-points of light design, they are extremely effective. A head-up display can display a wide range of information simultaneously, removing the need to glance down from the road and there are lots of standard assistance features for unforeseeable hazards.

Adaptive cruise control, lane-keep assistance, autonomous braking and a five-star Euro NCAP safety rating are all standard, but that can be added to with optional extras including a night-vision camera, for example. Our car had been upgraded to optional sports front seats, which are as supportive as they are comfortable with 18-way adjustment ($850) and heaters, which costs another $990. It also had the panoramic sunroof which adds another $4490 and is best appreciated by the rear occupants. Add on the more premium Bose sound system for $2470 and a keyless entry and start system for $2490, and you can see that a majority of the extras fitted to our car are focussed on boosting luxury levels.

But an $11,290 spend hasn’t greatly lifted the all-important first impressions when boarding. With standard gloss black finishers and black leather, the Cayenne interior is sharp in design but lacks the sense of occasion that higher-grade variants deliver. Once you start to delve into the features though the value rises to the surface.

Air suspension is the ultimate option for boosting cabin comfort but our test car did remarkably well on standard coil springs. Road noise is low, only the most violent road imperfections were transmitted through uncomfortably and a cruise into central Victoria seemed shorter than it appeared on the map.

It’s unlikely you would have the Cayenne in your consideration set if you weren’t interested in the performance promise that the iconic Porsche shield represents. Perhaps you already have something wearing the badge but it only ventures out on weekends or can only accommodate two.

But its maker understands this and the third-generation Cayenne has been engineered to reward the driver as much as the passengers.

It might only be the entry version, but it still packs a 250kW punch and, for the new version, a weight-loss diet translates to convincing performance. Accelerating to 100km/h from zero takes 6.2 seconds – quicker than a Volkswagen Golf GTI – and if you find a road long enough its turbo V6 will blast you to 245km/h.

Power is readily available with minimal hesitation from the engine and its excellent automatic transmission. The eight-speed auto is smooth in operation for a majority of driving, but has a hidden sporty side that is eagre to reveal itself with little provocation.

Our car wasn’t fitted with a sports exhaust so switching to a noisy mode wasn’t possible, but the natural note was smooth and satisfying and won’t annoy the neighbours.

Porsche’s $2690 Sport Chrono Package was included however, bringing a number of driving modes and easily the best solution for switching between them. A simple but beautiful dial mounted on the steering wheel is elegant and instantly to hand. There are few motoring niggles more irritating than being faced with a menu of options that need to be scrolled through when you want quickly to flick to sport mode, but Porsche has solved this.

The pack also centrally mounts an analogue clock to the centre of the dash which is handsome enough to wear on your wrist and lifts the quality feel of the interior a little.

Unladen, the Cayenne weight sneaks in just under two tonnes but the way it handles will have you doubting that, with a front end that is highly obedient and has a wonderfully neutral feel when powering through fast corners.

Adaptive air suspension offers more versatility when flicking through the driving modes, but the steel spring suspension is lively and responsive, and doesn’t compromise comfort to any great degree. Perhaps the relatively fat tyres on standard 19-inch wheels add a little absorbency into the equation. Like all Porsche models, brake pedal feel is delightfully firm and confidence inspiring and only the most punishing braking hints at the big SUVs mass. If that’s a problem however, you could invest in the company’s optional Surface Coated Brake kit, which brings innovative tungsten finished discs and beefy calipers.

The dynamic capabilities of the base Cayenne certainly don’t feel accidental and, in the light of its more athletic S and Turbo siblings, the most affordable version is still remarkably good fun to drive, whether that’s in town or off the urban leash.

With so many tempting options to customise the Cayenne, it might be hard to resist blowing the budget. But tempted you will be, because an off-the-shelf Cayenne feels a bit blank and yearning for a little pepper dusted from the catalogue.

The jump to the $155,100 Cayenne S might seem like a big leap, but it kicks off with many of the extras you might be considering adding as an option to the more affordable base item. It’s frighteningly easy to amass nearly $39,000 of options from the Porsche customisation list after all and with the S, you’ll be getting a performance advantage thrown in too.

That said, the most affordable Cayenne is a satisfyingly well-rounded SUV with performance to keep the driving enthusiast happy without neglecting family duties. And if you’re willing to forfeit the carbonfibre trims, embroidered leather and low-profile tyres of Porsche’s more premium offerings, the Cayenne is the quiet achiever in Zuffenhausen’s stable.