As big-cube, hairy-chested V8s gradually become less and less politically-correct, Jaguar’s decision to jam one into its otherwise family-focused F-Pace SUV is certainly a bold move… and one that’s transformed the brand’s first-ever high-riding wagon into a bit of an animal.

We travelled to the south of France for our first steer of the Jaguar F-Pace SVR ahead of its arrival in local showrooms in June.

In case the idea of a tasty supercharged V8 wasn’t enough to entice you, there’s another sizable incentive in the form of the F-Pace SVR’s price tag. Simply put, at $140,020 the F-Pace SVR isn’t just the most affordable member of Jaguar’s high-performance SVR family, but it’s also a compellingly priced within the fast SUV fraternity. 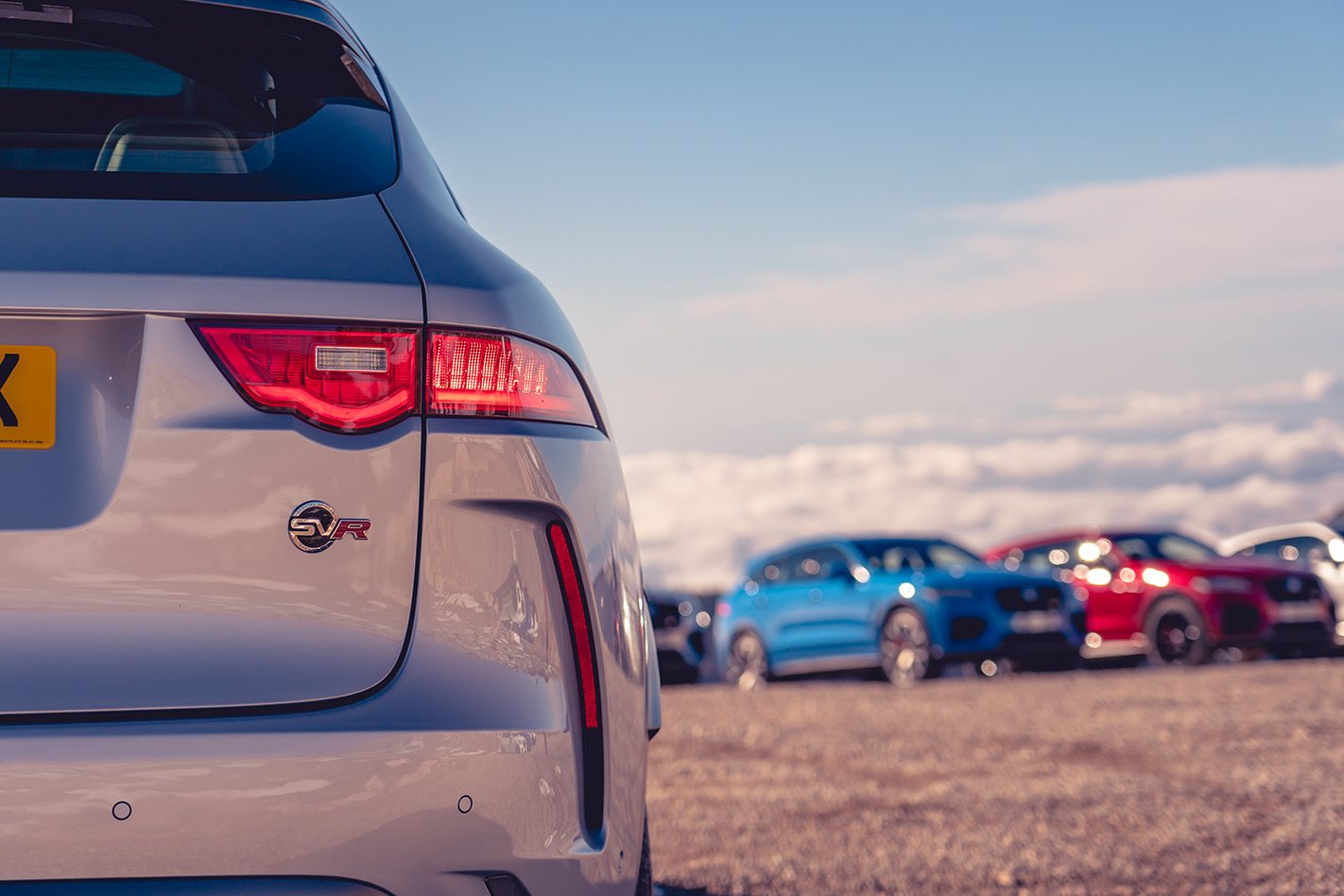 Granted, the Porsche Macan Turbo and its blood brother the Audi SQ5 cost less – more than $40,000 less in the case of the Audi – but neither can hold a candle to the Jaguar’s 404kW power output and scintillating 0-100km/h acceleration. The Alfa Romeo Stelvio Q, Mercedes-AMG GLC 63 S and, eventually, the BMW X3 M are truer rivals for the F-Pace SVR, but the first two will cost you an extra $9K and $22K respectively, while pricing for the BMW has yet to be announced.

Still not convinced? Well, consider that the F-Pace SVR’s powertrain is essentially the same as that in the $238,200 Range Rover Sport SVR, and the Jaguar shapes up as a value-rich proposition indeed. 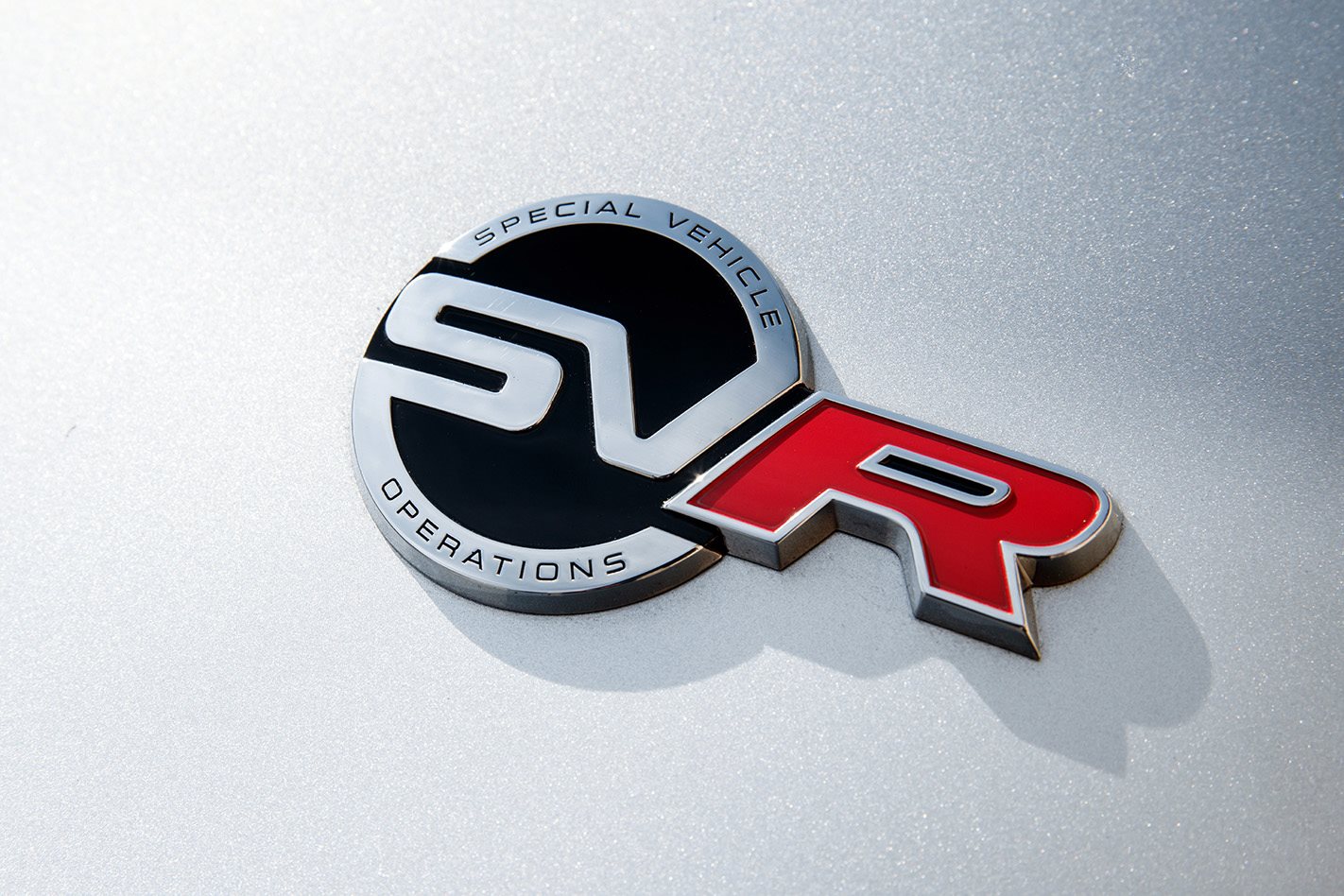 The SVR’s standout features are mechanical, so we’ll cover them off in the On The Road section later. However, that’s not to say there isn’t plenty of in-car gizmology to keep driver and passengers comfortable, informed and entertained.

As standard, all F-Pace SVRs sold in Australia feature well-bolstered (and heated/ventilated) sports front seats, quilted leather upholstery, a grippy SVR-specific steering wheel, adaptive LED headlamps, dual-zone climate control, and an in-car wifi hotspot that can link to up to eight devices at a time. 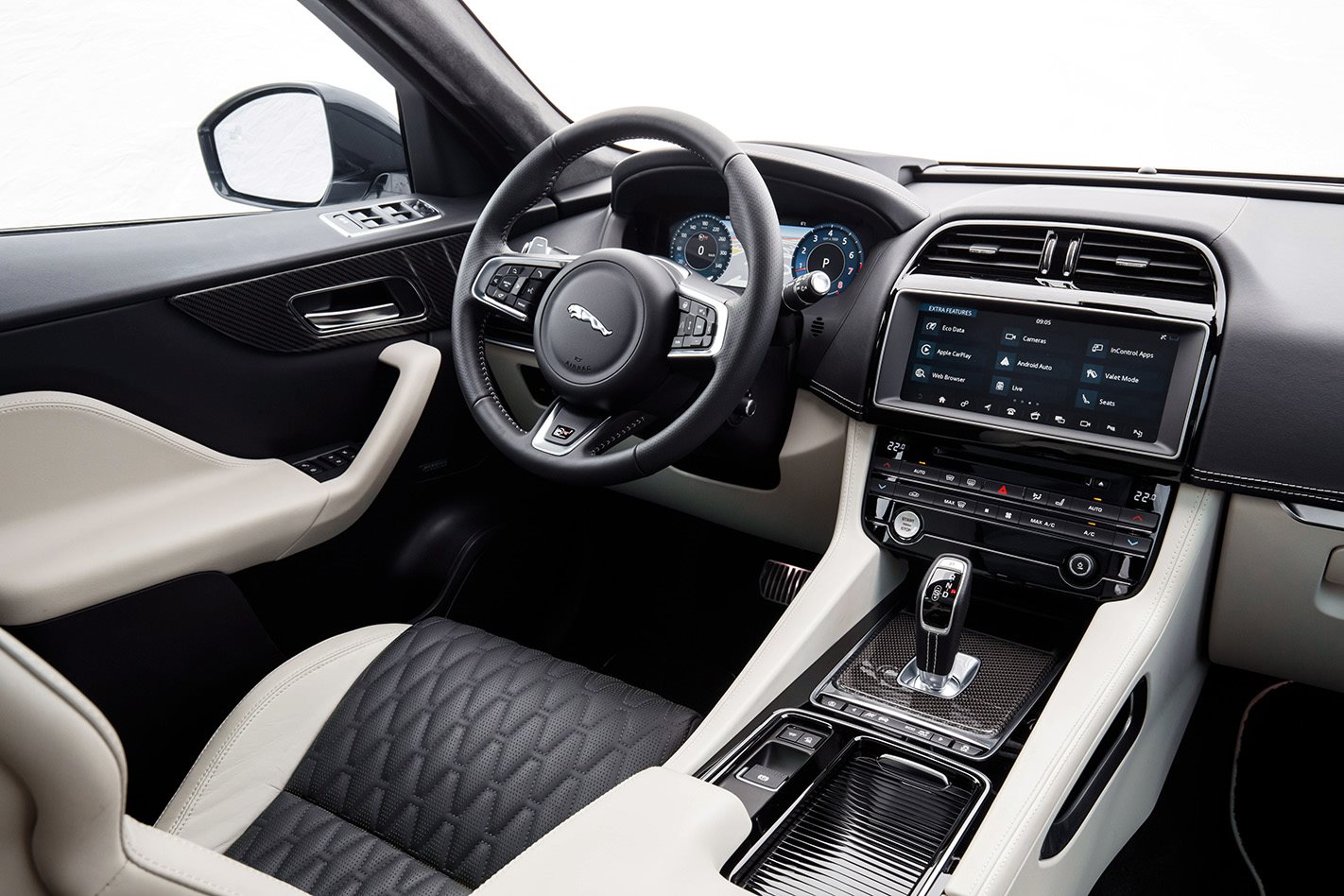 Infotainment comes courtesy of the 10-inch Touch Pro screen in the centre console, which is slick but not quite as up-to-date as what’s found in Jaguar’s I-Pace or the just-released XE update. A 12.3-inch electronic display sits within the instrument binnacle, with eye-pleasing and easy-to-see graphics. Unfortunately a head-up display remains a cost option even for the top-dog SVR, a definite downside given the car’s prodigious ability to exceed the speed limit.

Front, rear and side parking sensors are standard along with a rear camera, though blind spot assist, active cruise control, rear cross-traffic alert and high-speed AEB are cost options, only available with the purchase of an option pack. Want smartphone mirroring too? You’ll need to shell out $495 for Jaguar to enable that feature. 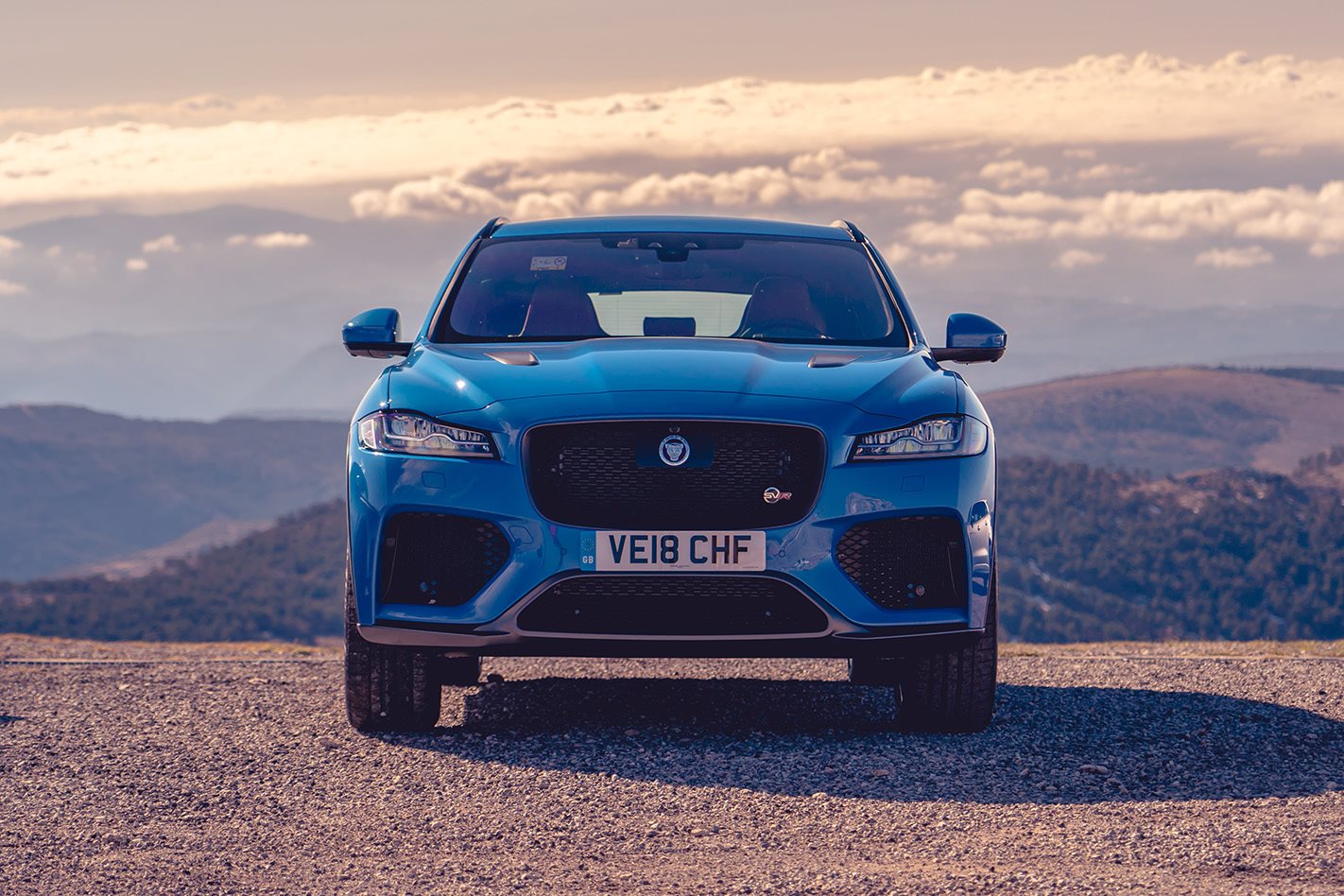 Though equipped with an aggressive bodykit that adds a vented bonnet, deeper front air dams, vented front quarter panels, deeper side skirts and a lift-reducing rear bumper/spoiler combo, the F-Pace SVR is dimensionally almost identical to a regular six-cylinder F-Pace.

The biggest difference can be seen in width with subtle arch flares taking the F-Pace SVR’s width to 207cm, whereas milder F-Pace variants measure less than two metres wide from flank to flank.

On the inside, the cabin only really feels different from the first row, where the completely unique front seats provide a slightly different posture while seated. Behind the second row, there’s 650 litres of cargo space with the seatbacks raised. 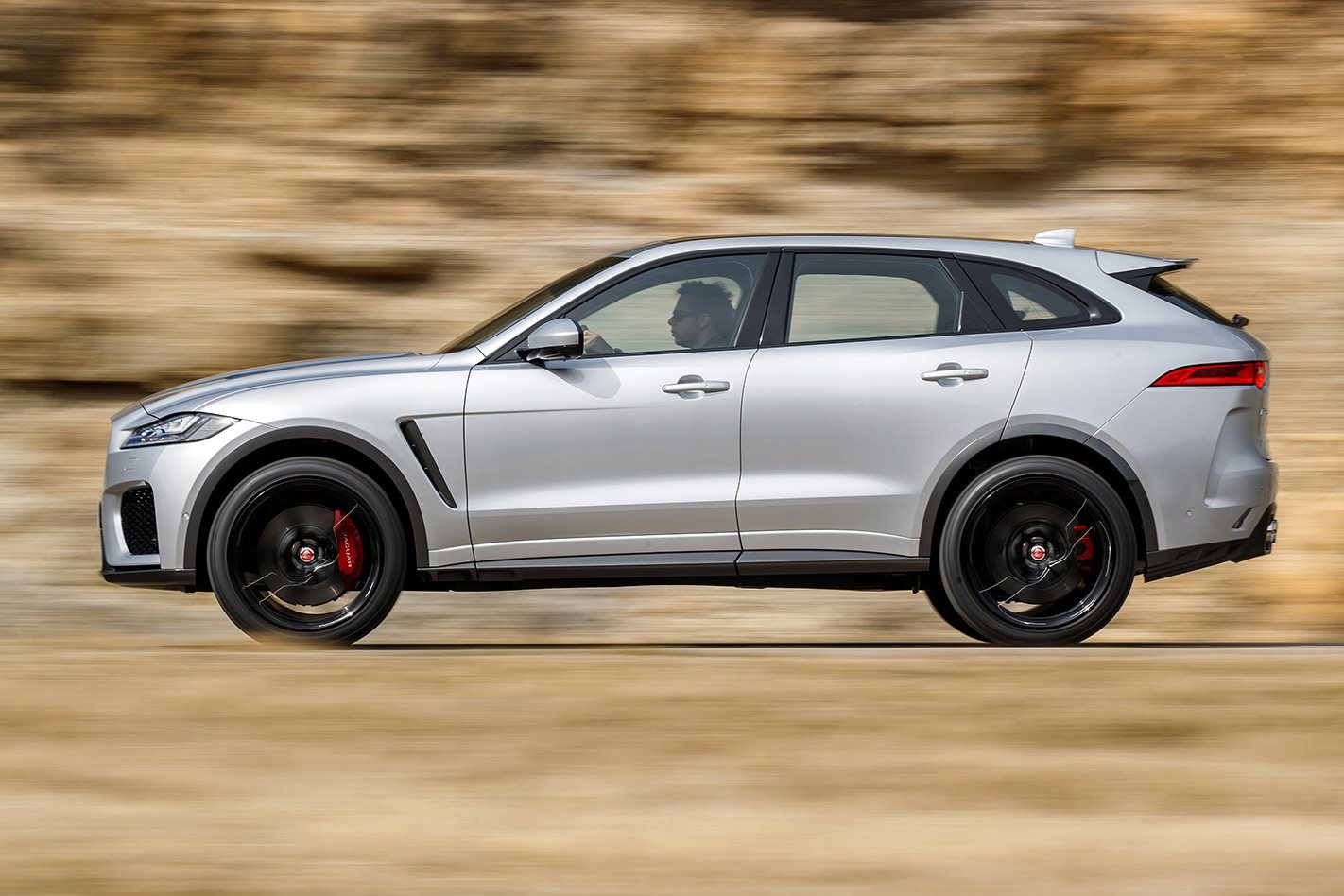 At the SVR’s price point, we’d expect at least some of those features to have been standard-issue. 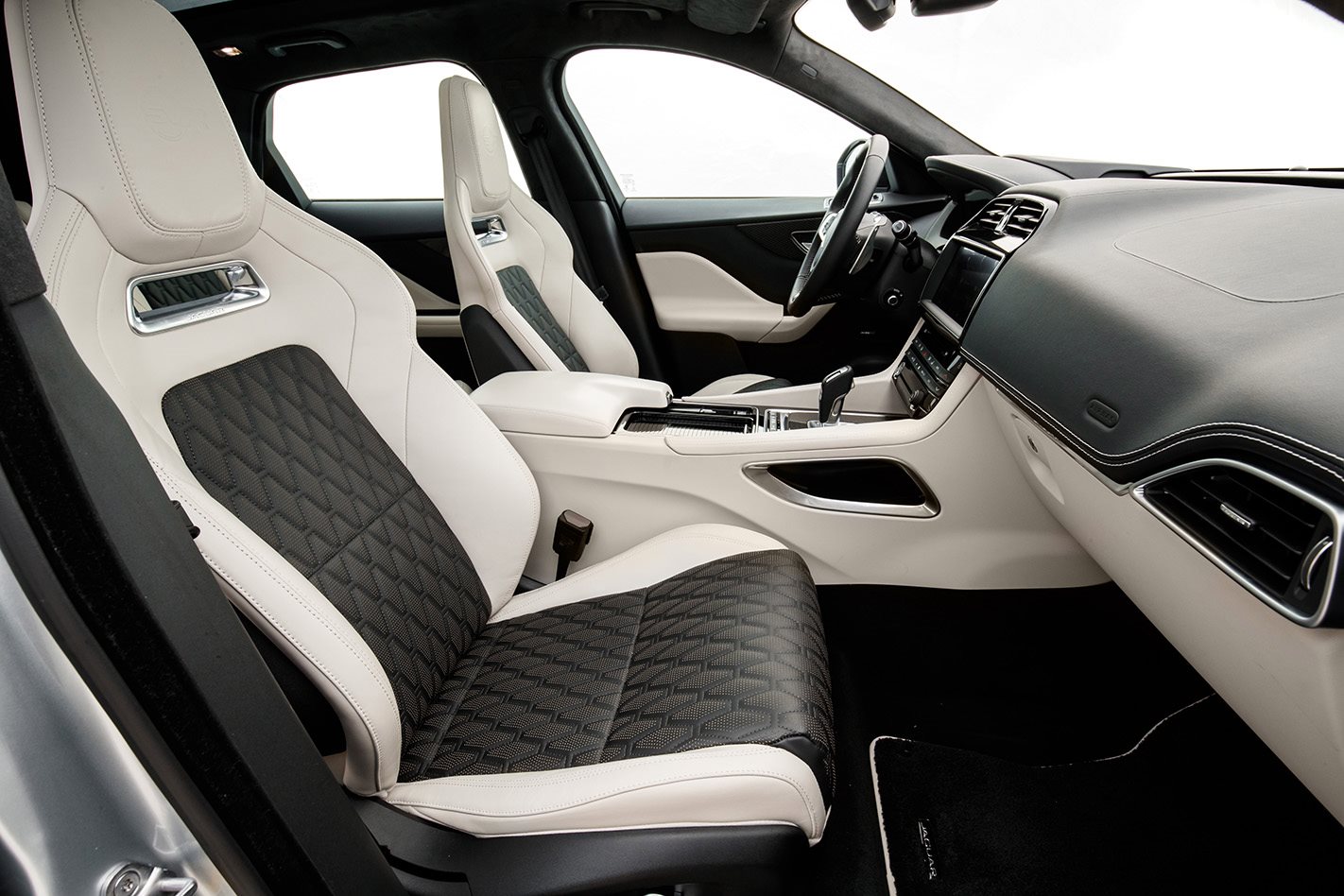 Those big-bolstered SVR-specific front seats hug you nicely – and they’re a necessity too, given the car’s ability to change direction. Even so, unlike some sports seats they’re adjustable and generous enough to provide you with some meaningful wriggle room – a pinched bum shouldn’t be a side-effect of spending lots of time in the SVR.

They’re heated and ventilated too which is nice, and that other key touch-point, the steering wheel, is another SVR exclusive. Thick-rimmed and shaped for a sure grip, it’s a nice interface with the car’s standout feature: its chassis. 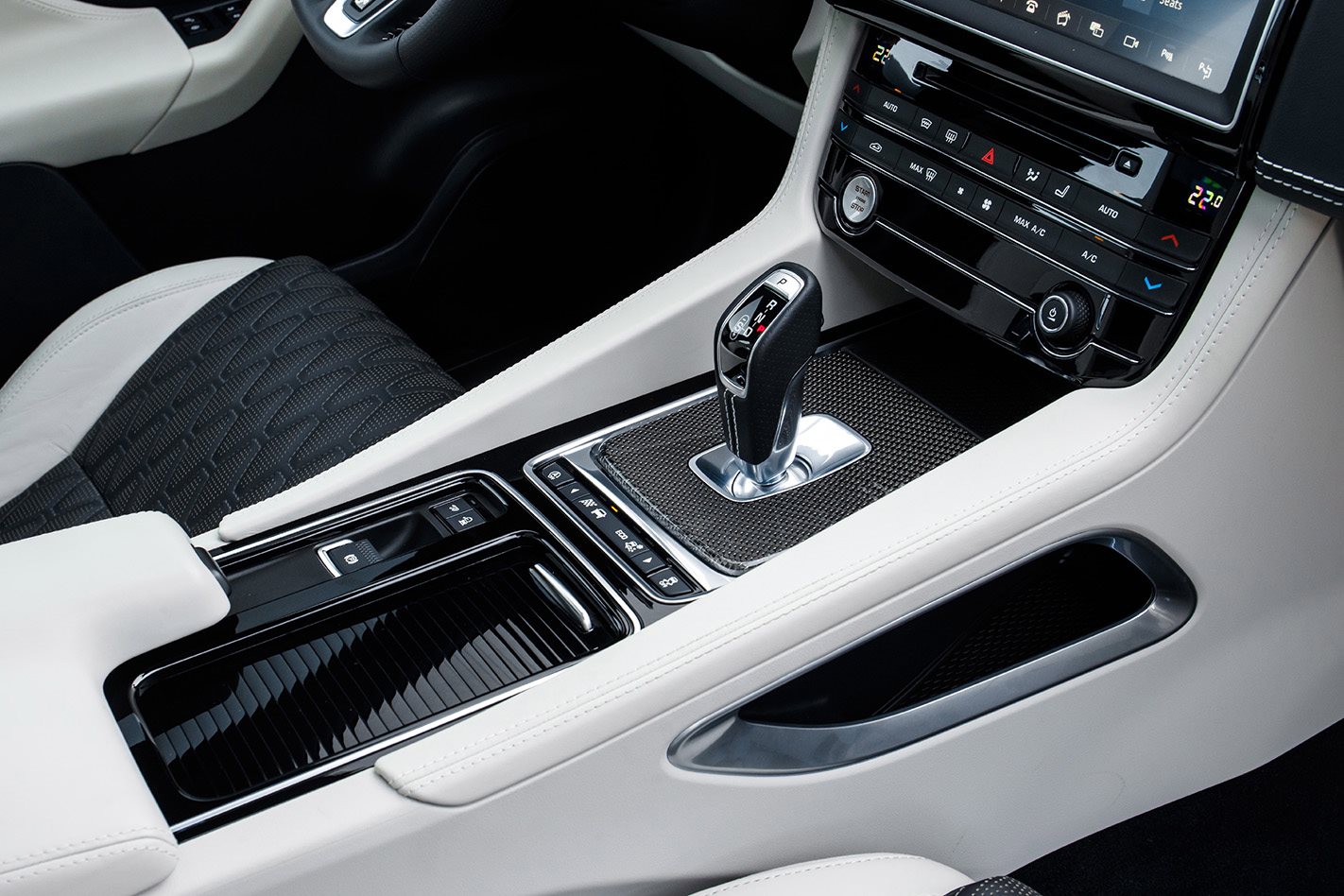 The F-Pace SVR also sports a conventional transmission selector atop its centre console, which is miles ahead of Jag’s oddball rotary dial that has been the default for many years now. It might not look as neat, but it’s ergonomically superior – though it still seems like there’s a lot of wasted real estate between the driver and front passenger.

Rear seats are also SVR-specific, with the outboard positions equipped with heaters and cushions sculpted to provide better lateral support. We didn’t test them out, however – our attention was firmly focused on the experience from the front.

That said, as nice as the F-Pace’s cabin is, it lacks some of the glamour and visual sparkle of its German rivals. It’s a step above the surprisingly undramatic Stelvio, but still a little sober for something pitched as a performance flagship. The ride quality is also something that may affect how you feel about the SVR, for even in comfort mode those adaptive dampers can be awfully firm on choppy roads and urban lumps. Raise the speed, however, at the ride smooths out substantially. It’s clear this car was engineered with going fast in mind, not dawdling around the suburbs. 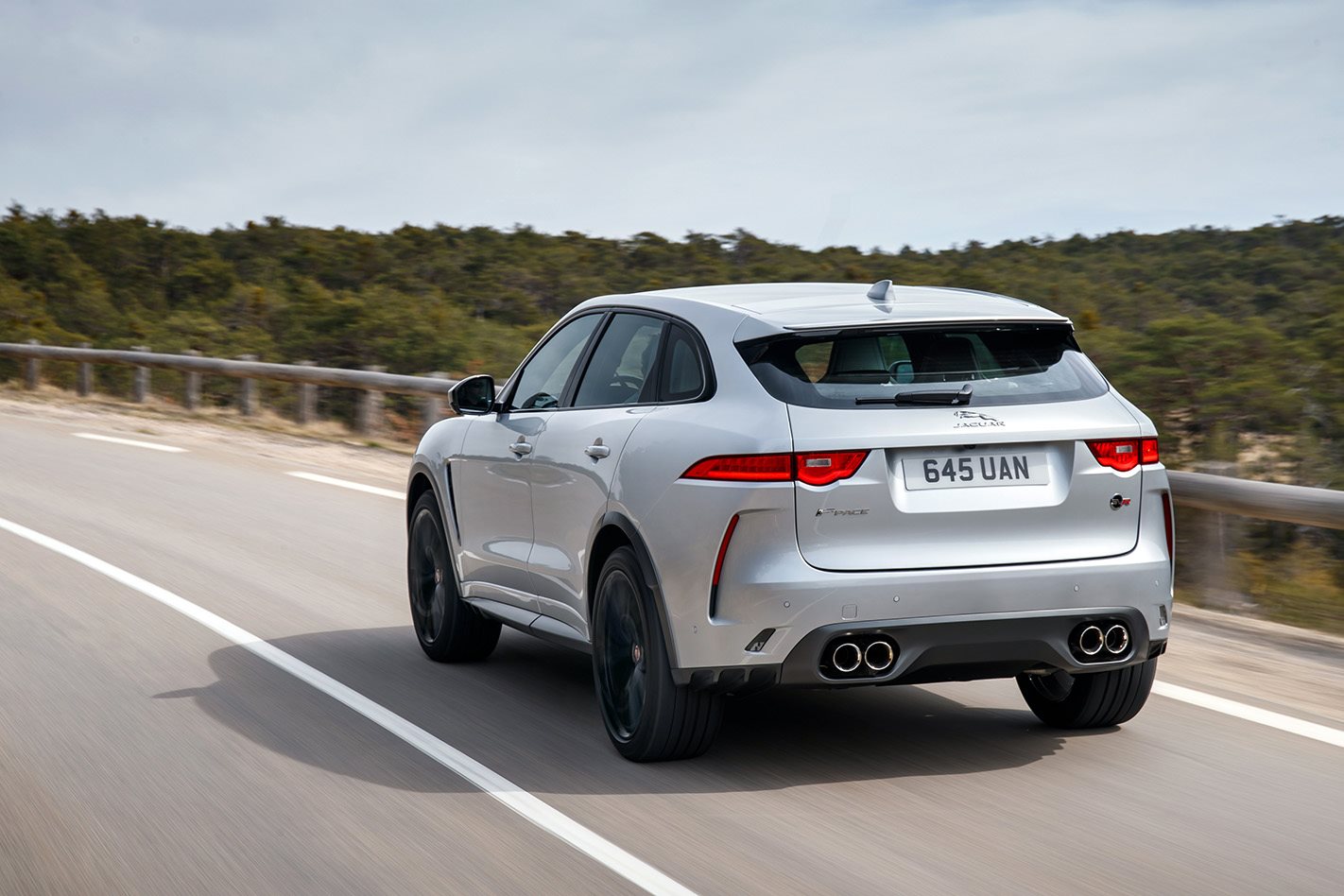 Four-hundred and four kilowatts. That’s a lot of power. Not for an SUV, but for any road-going, registerable vehicle, period.

But trust the mad boffins at Jaguar Land Rover’s Special Vehicle Operations division to slip their second-most potent V8 into a family all-terrain wagon. Their insanity is our gain, because while injecting that much brawn into a car designed for mum, dad, three kids and a terrier might seem a touch irresponsible, the result is a mutant machine that should turn the opinions of ‘performance SUV cynics.

In short: it’s fast. Very fast. At full whack it’ll jump to 100km/h from standstill in just 4.3 seconds, which may not be quite as rapid as the 3.8s taken by the Alfa Romeo Stelvio Q or Mercedes-AMG GLC 63 S, but it’s nevertheless a clear half-second ahead of Porsche’s Macan Turbo. You can thank the SVR’s 404kW/680Nm 5.0 litre supercharged V8 for that. 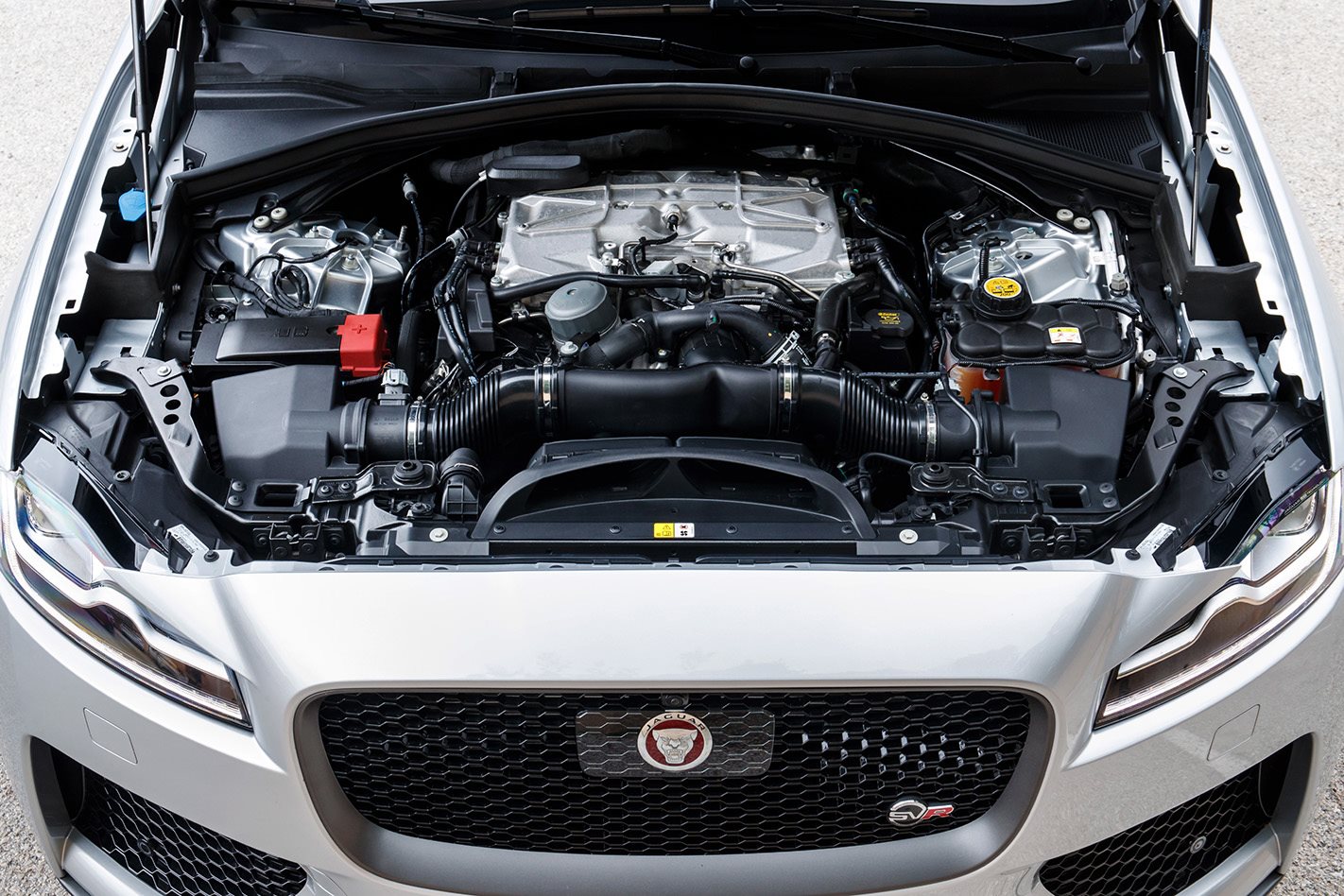 But the SVR’s development hasn’t just been the single-minded pursuit of performance. Jag’s SVO division wasn’t aiming to make the F-Pace SVR the fastest SUV around the Nurburgring, because in their words that objective would have simply resulted in a vehicle that would be, well, a bit rubbish to drive every day.

A veiled attempt at throwing shade on the aforementioned Stelvio Q and GLC 63 S, both of which have laid claim to the title of fastest SUV around the Nordschleife? Perhaps.

But where we are, in the south of France on the F-Pace SVR’s international launch, SVO’s commitment to making a vehicle that’s more road-oriented is certainly appreciated.

Our route traces through sections of the spectacular Verdon gorge to the north of Saint-Tropez, hugging limestone and granite cliffs and weaving in, out and through the rock. Throw in frequent hairpin switchbacks and short straights, and the drive is an almost constant dance of brief spurts of full-throttle acceleration, quick left-right steering inputs and firm stabs of the brake pedal. 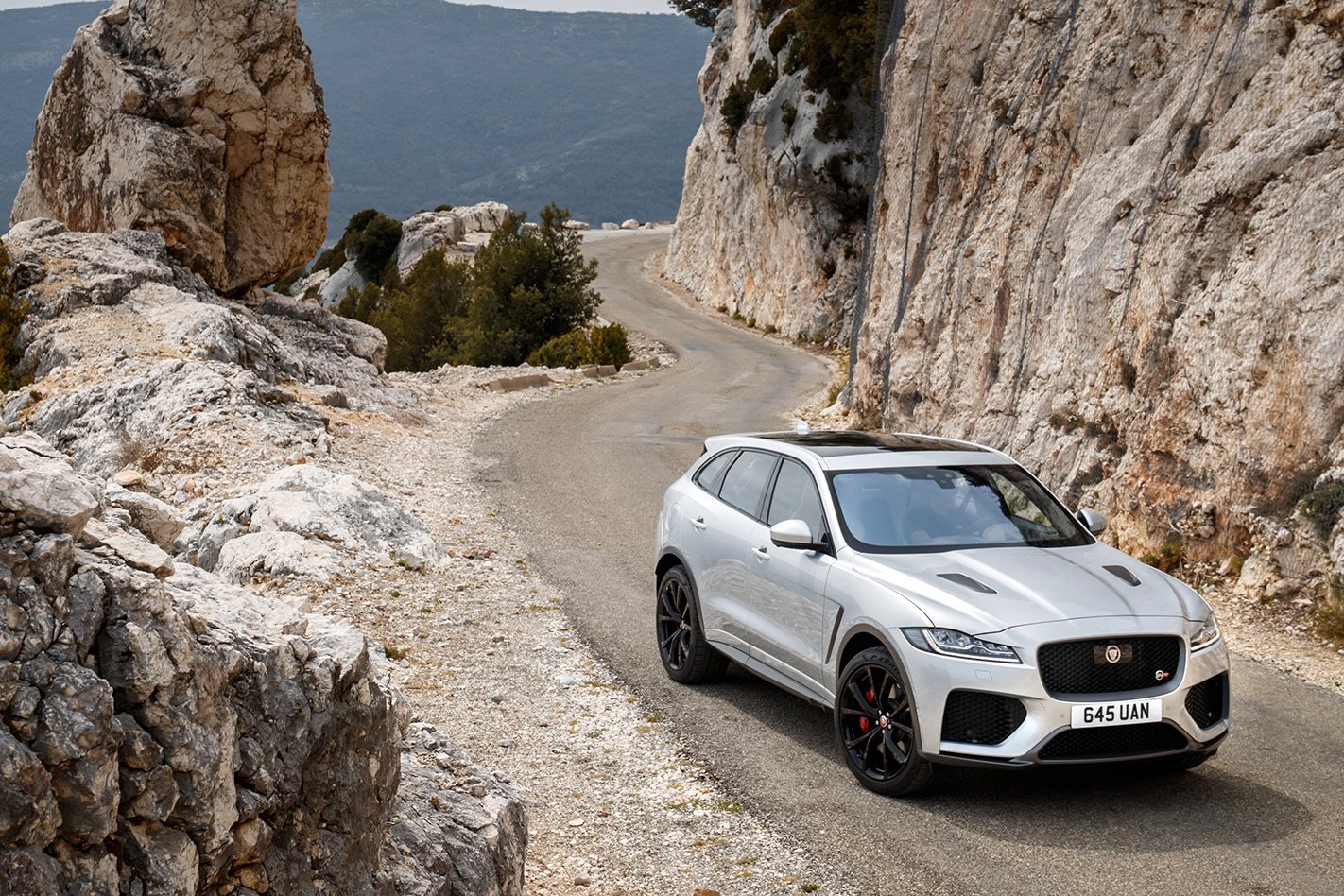 And in this environment, the F-Pace SVR delights. That engine, first of all, is a peach. Being supercharged it feels fabulously linear and manageable, an attribute that many of its turbo rivals don’t have. It also sounds mega with the exhaust baffles opened in dynamic mode, its bassy high-decibel report echoing off cliff faces from behind while the supercharger whines through the airbox up front.

It’s backed up by an eight speed automatic that blasts out rapid-fire shifts that are almost dual-clutch quick, and is clever enough to simply be left in its sportier automatic setting should you just want to focus on guiding the car.

Which would be understandable, given there’s much joy to be had in simply steering the SVR. Its grip is stupendous, and on a dry road it’s phenomenally hard to unstick. 295-section rear tyres will tend to have that effect. Even with a smidge of moisture we could only coax the slightest wriggle from it when powering out of a corner, but when you’re dealing with 404kW in a big heavy wagon that’s probably a good thing – especially if Junior and Rex are in the back. 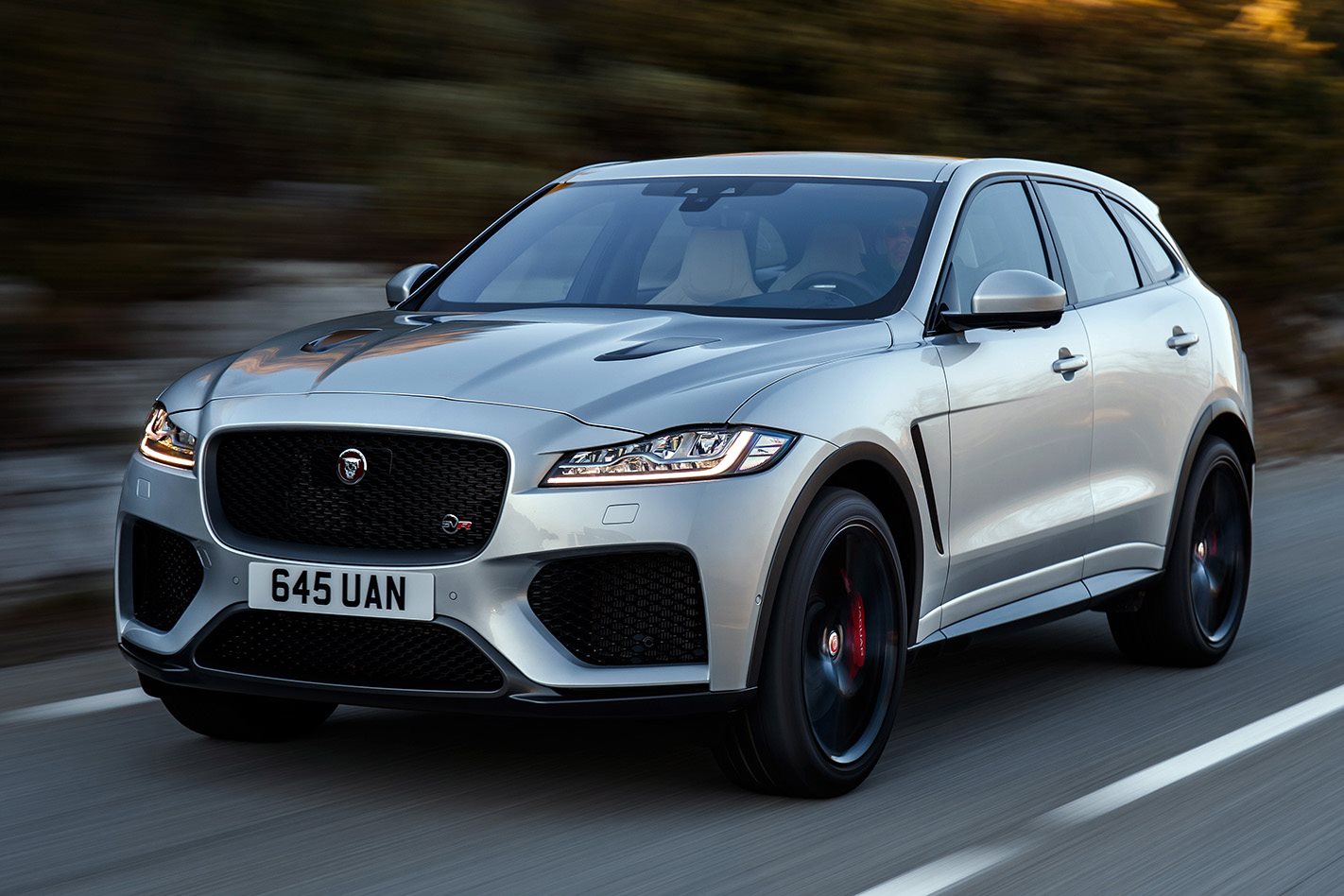 Control, though, is never an issue. The SVR’s chassis is tuned to handle, with higher springrates and clever adaptive dampers working in concert with firmer bushings and an AWD system that preferences the rear axle to neuter understeer and impart a balanced feel.

The steering rack also boasts an SVR-specific tune, and though the electrically-assisted tiller does filter out a lot of sensation about what’s beneath those front tyres, it’s direct, fast-reacting and authoritative.

The only thing it doesn’t handle well is pockmarked roads, cobblestones and speed bumps, with the suspension’s firmness and low-profile rubber on 22-inch alloys (21-inch wheels are standard) not being especially conducive to wafting comfort. 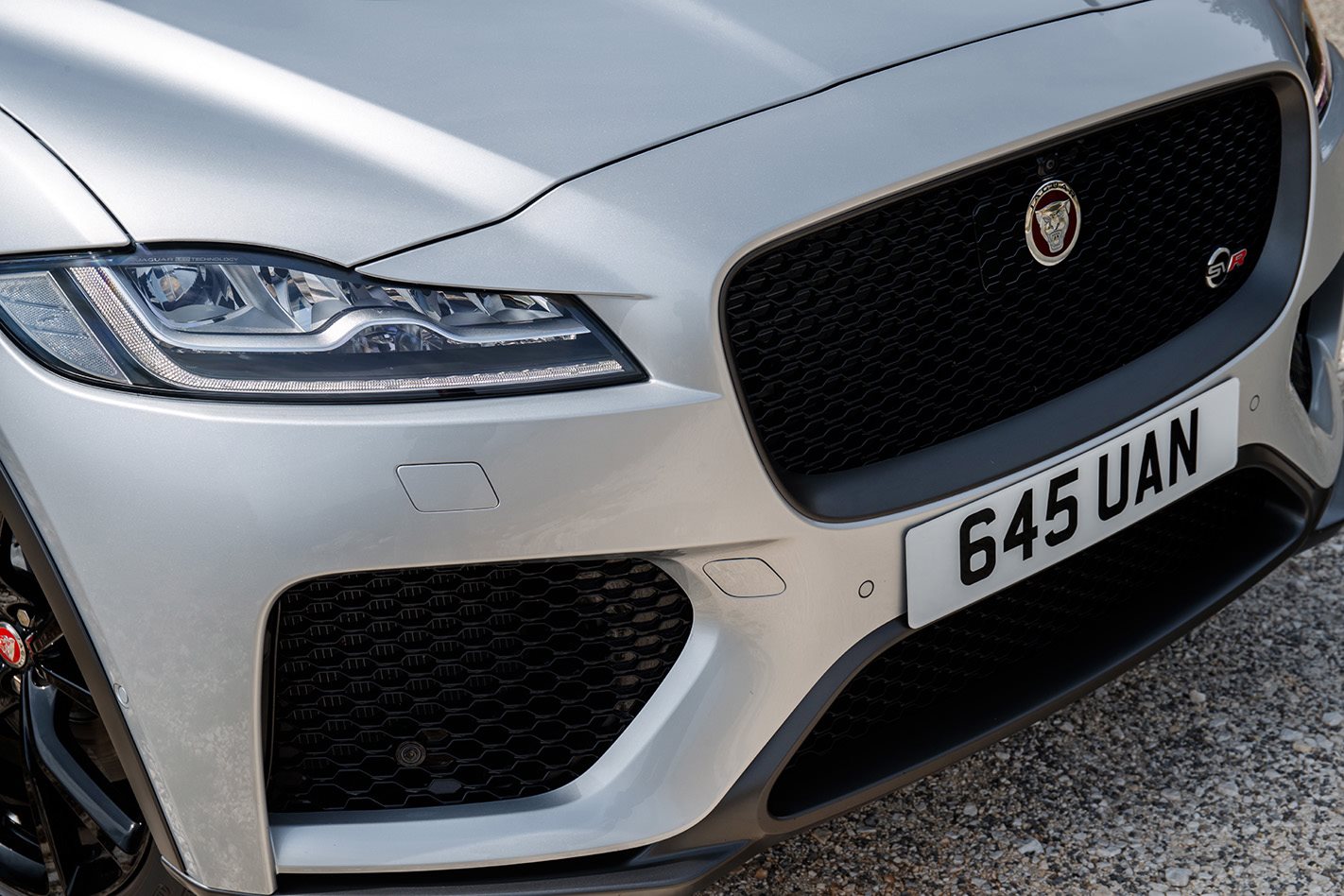 The F-Pace SVR has immense capabilities as a performance car, capabilities that should hopefully help you overlook its fairly brittle around-town ride and somewhat restrained cabin.

And for the amount of dollars required to get into one, it’s a solid buy. Is it a better all-rounder than Merc’s GLC 63 S or Porsche’s Macan Turbo? Is it shamed by the Stelvio Q’s speed? We’ll have to wait a couple of months for the F-Pace SVR to land in Aussie showrooms to find out.