Does the Mazda 3 need any introduction? As the top-selling small hatchback among private buyers – that is, those actually paying their own money for a new car – the Mazda 3 is a household name in Australia. What we’ve got here, the Astina G25, is the range-topper for now.

Make no mistake: at $37,990 before on-road costs (subtract $1000 if you’re okay with a manual gearbox), the Mazda 3 Astina G25 is not a cheap option in the small car world. However, when calculating value we need to look not just at what equipment it comes with, but the space, quality and design as well. 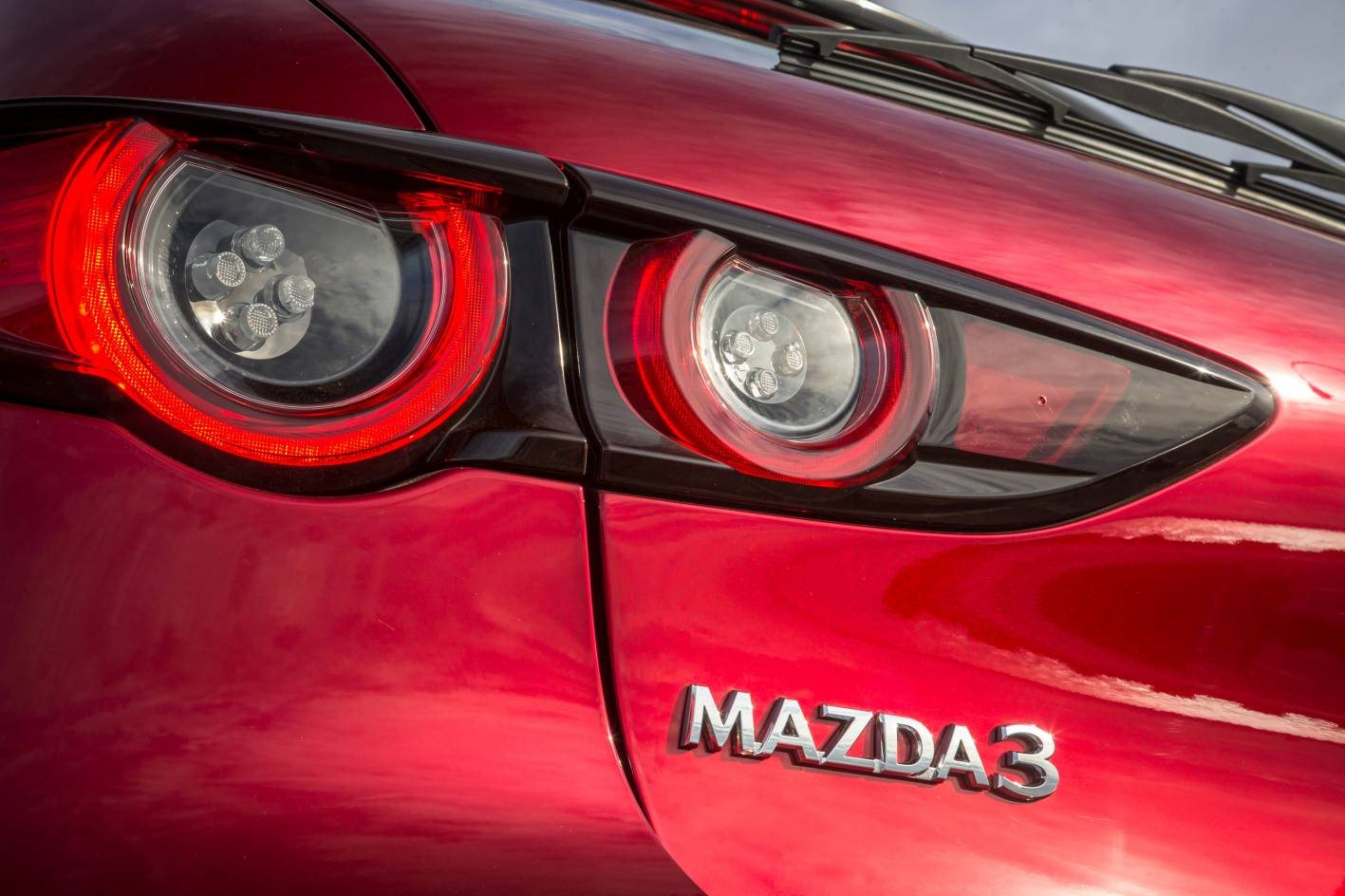 In those last three regards, the Astina actually outdoes some premium brands, meaning that some – if they can look past the mainstream Japanese badge – may regard the Astina to be exceptional value considering its near-luxury proposition. Within its segment, though, it’s well and truly at the top end of town.

As the range-topping variant, the Astina naturally comes with the fattest equipment list of its family. And as the newest model to enter Mazda showrooms, that equipment is also the most cutting-edge offered by the brand. 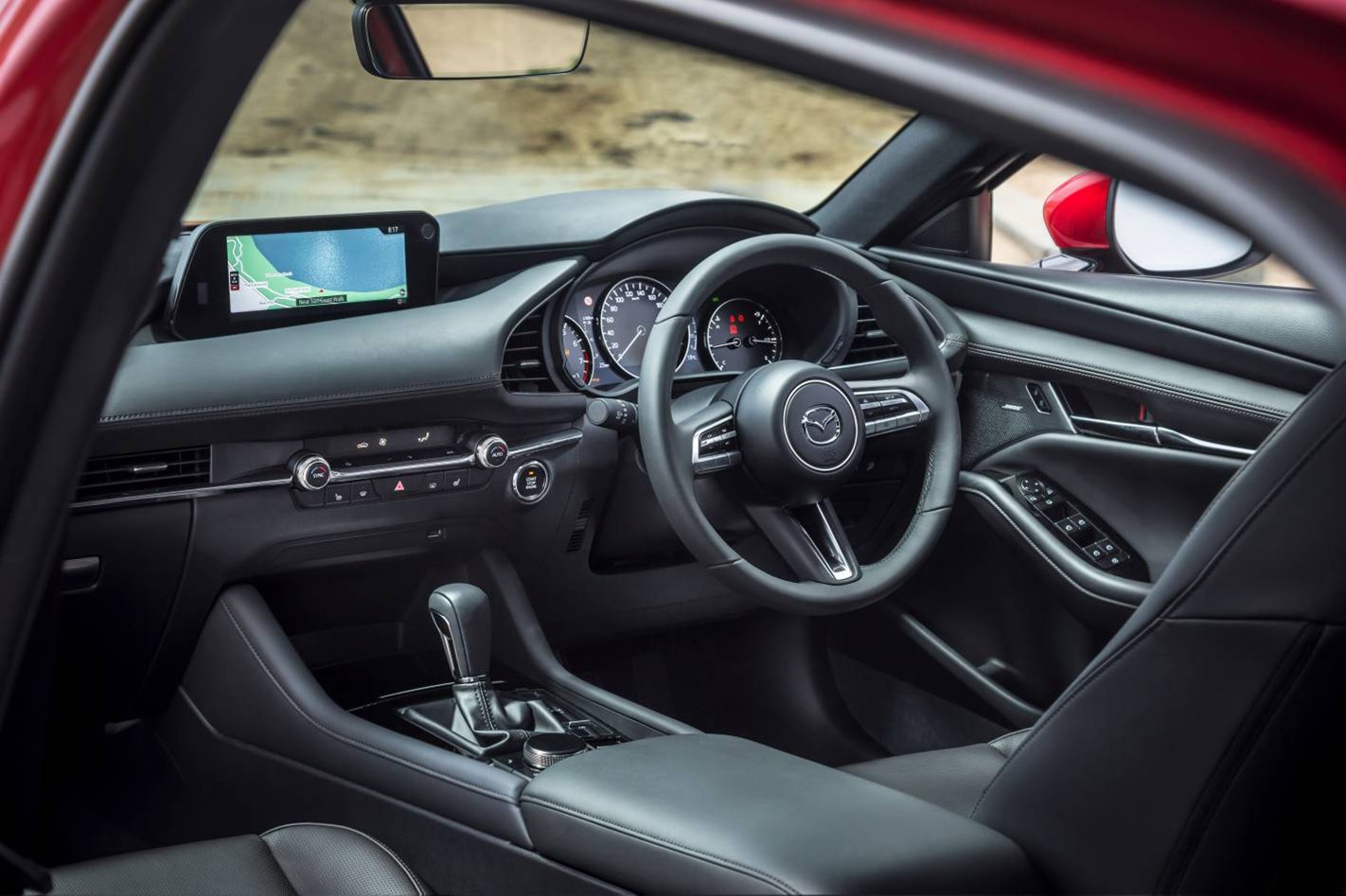 The centrepiece is the large and clear 8.8-inch colour infotainment screen, mounted high on the dash and set far forward to minimise eye strain. It’s a massive step forward from the MZD Connect system that was offered in the previous-gen Mazda 3, and its console-mounted control dial is intuitive and slick to use. Android Auto and Apple CarPlay smartphone mirroring are both standard, as is a digital radio tuner, sat-nav and bluetooth. 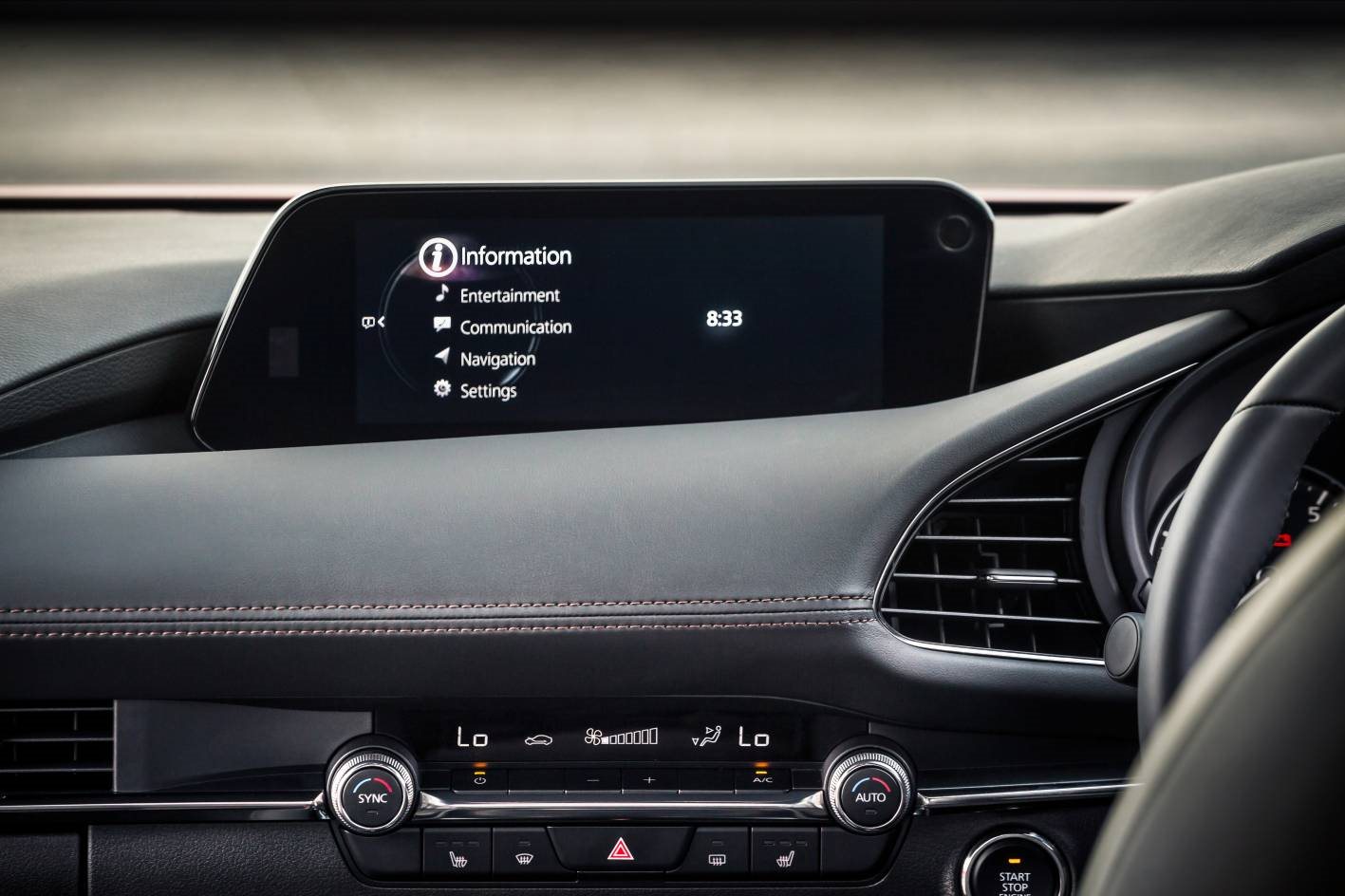 The Mazda 3 hatch resides in one of Australia’s most popular segments – that of the small five-door hatch. Comparable in size to key rivals like the Toyota Corolla and Hyundai i30, the new-generation Mazda 3 hatchback is fractionally shorter and lower-roofed than the car it replaces, but has a slightly longer wheelbase to boost cabin space.

Even so, with just 295L of seats-up boot capacity, the Mazda3’s ability to carry cargo is less than the segment average. The four-door Mazda 3 sedan fares much better, with a luggage volume of 444 litres behind the back seats. 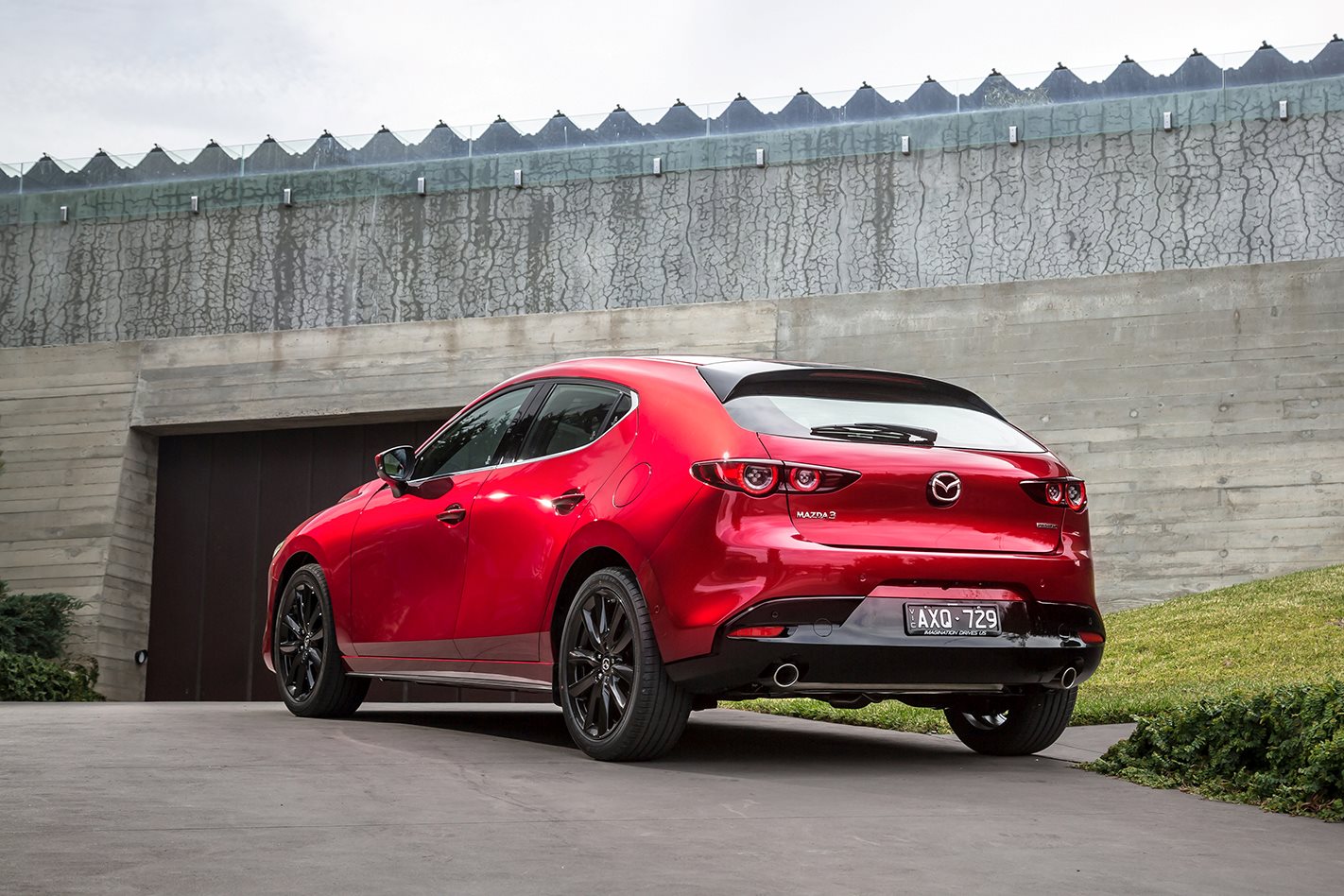 The safety equipment list is just as generous as its feature fit-out. Autonomous emergency braking keeps you out of trouble (and works at all speeds down to zero), as do the front and rear parking sensors, 360-degree parking cameras, lane departure warning, lane keep assist, blind spot monitoring (crucial given the new 3 hatch’s colossal C-pillars), fatigue monitoring and seven airbags. 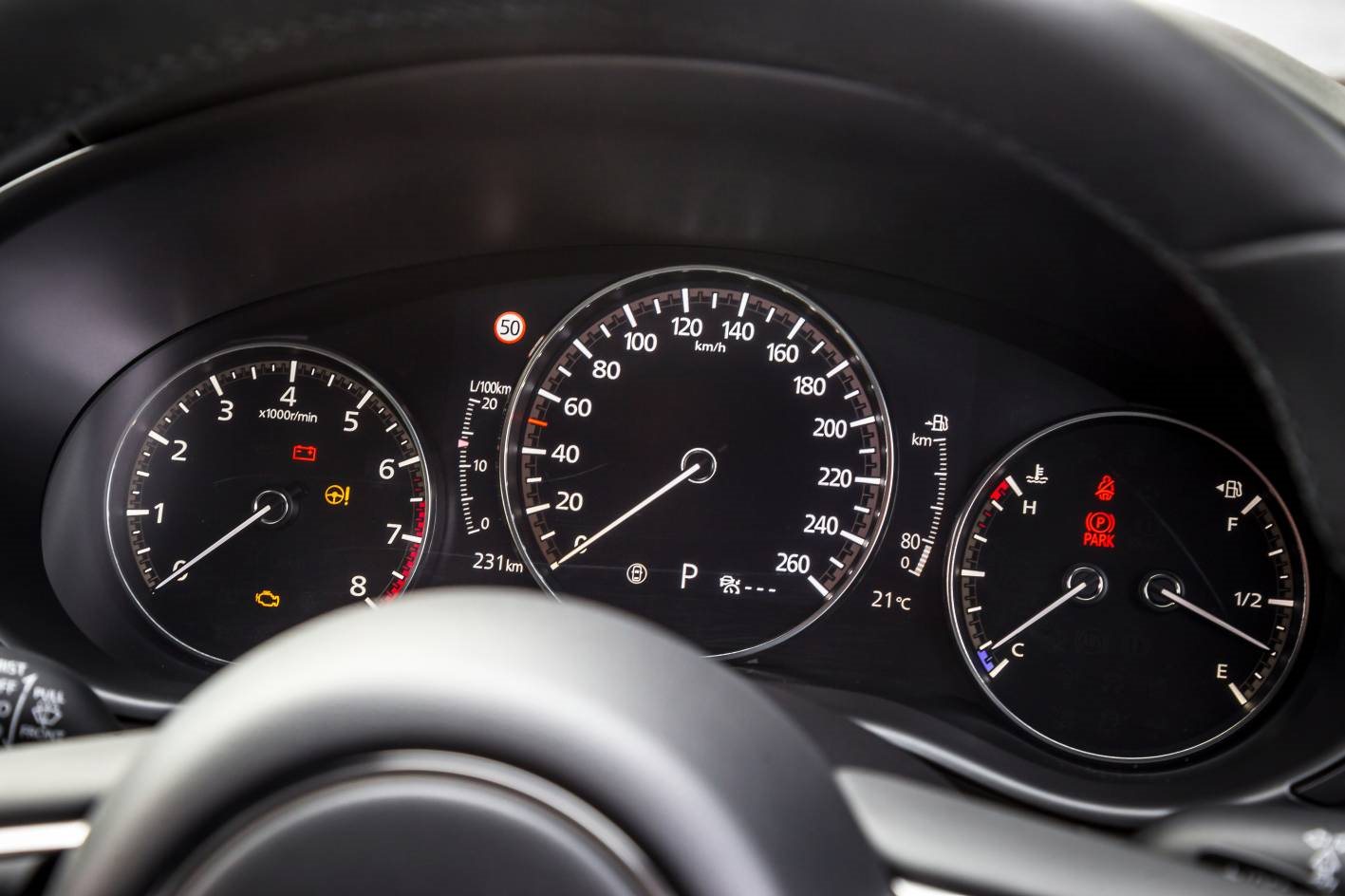 It’s baffling how upmarket the new Mazda 3’s cabin actually is. Sure, for the $37K range-topper we’ve got here you’d expect some blingy trim and leather-shod chairs, but the basic furniture in the Astina is mostly the same as that found in the base model Pure – a $24K proposition. It’s astonishingly good, and challenges Lexus for overall fit, finish and design.

That’s right, the cabin ambience is that good. 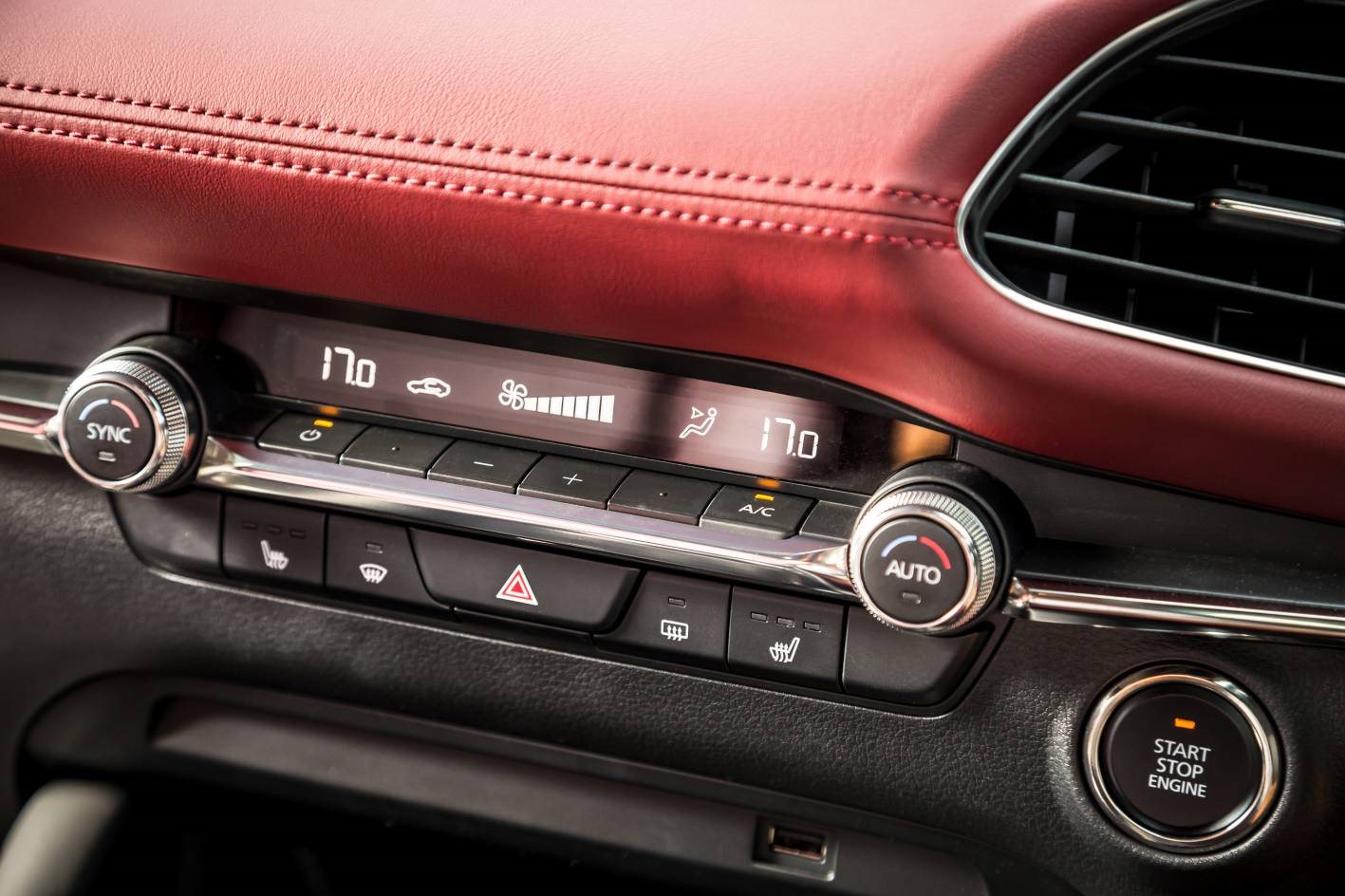 From the neat chrome bar that spans the dash and bisects the ventilation controls, to the soft double-stitched dash trim, to the perforated alloy speaker covers on the doors, to the eye-soothing backlighting of the steering wheel buttons - there’s a sense that this is a car that’s been designed and crafted with great care.

While the Volkswagen Golf was the previous yardstick when it came to small-car cabin quality, the fourth-generation Mazda 3 appears to be the new standard bearer. 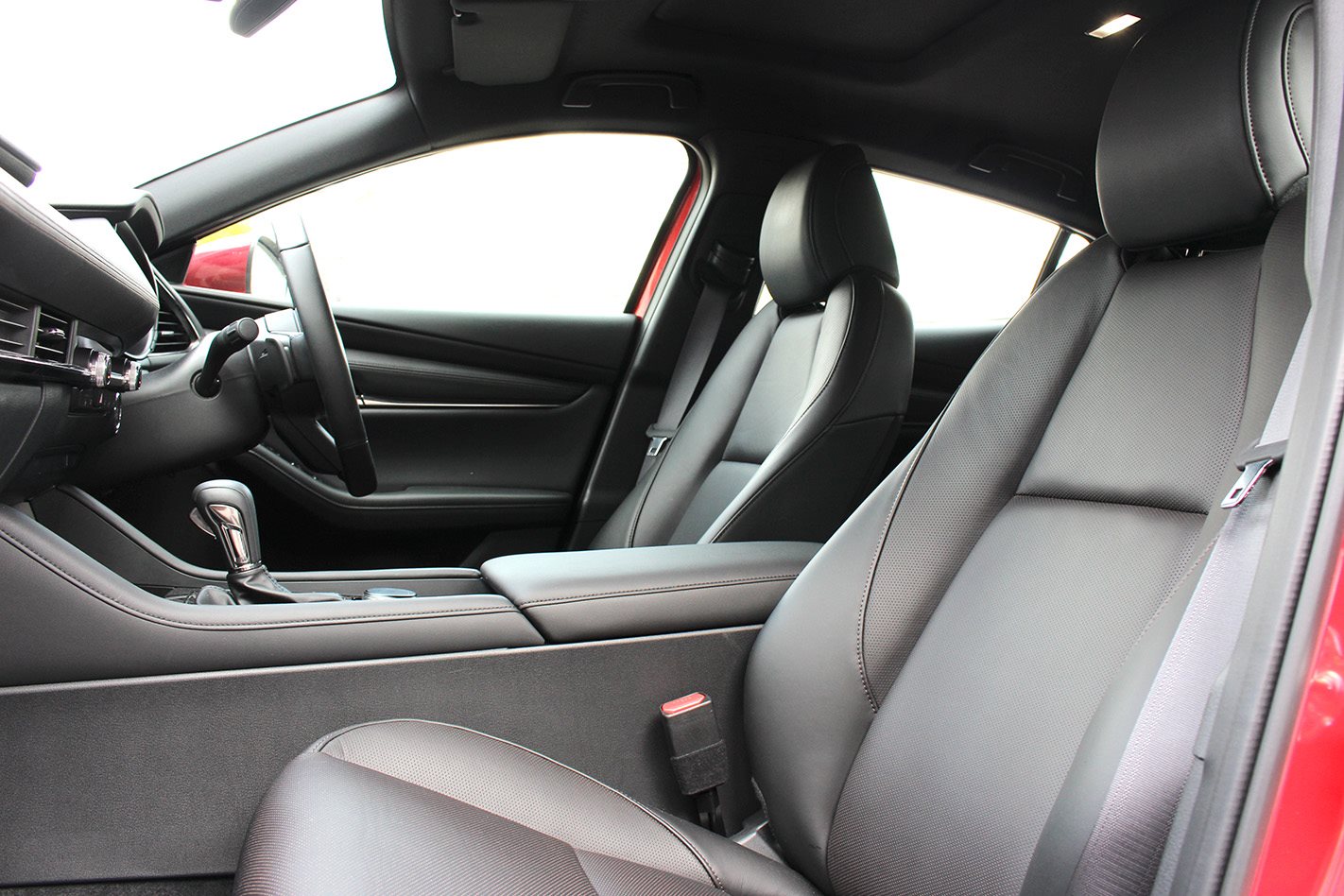 And from the driver’s seat, it feels as comfortable as it feels opulent. There’s a huge range of adjustment to the 10-way power-adjusted seat and the steering column, and the legs-out posture it encourages feels sporty.

Yes, over-the-shoulder vision is terrible thanks to the hatchback’s fat C-pillars and rising beltline, but the mirrors are large and blind-spot monitoring is standard, so keeping tabs on your hindquarters is far from impossible. 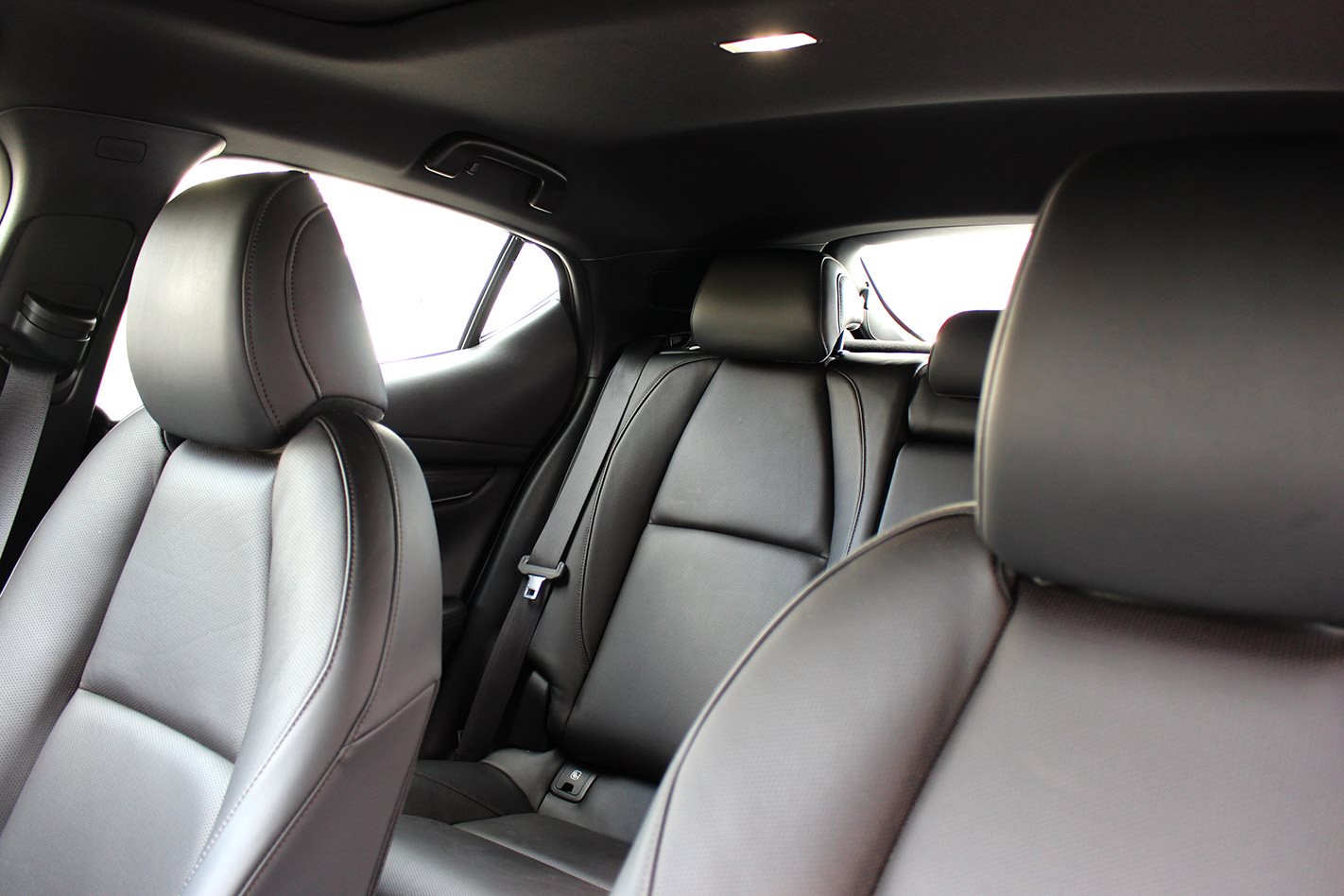 The report card for the back seats is a little less glowing, but still positive. The tapering window opening converges about where an adult’s eyeline is, so outward vision isn’t as obstructed as you may think, however the proximity of lots of dark-coloured fabric, leather and plastic to your head contributes to a claustrophobic feel.

Legroom feels about the same as it was in the previous generation (so not terrible, but not exactly generous), and there are face-level air vents and nicely sculpted seat cushions for the backseaters too. It’s cosy, but comfy.

Just like the cabin, the fourth-gen Mazda 3’s on-road experience can be summed up with just one word: refined.

It’s commendably quiet at all speeds, with engine noise, road noise, suspension shock and ambient sounds all suppressed to a degree that is difficult to find in other mainstream cars. Credit Mazda’s engineers, who responded to years of complaints about noise, vibration and harshness in previous Mazda 3 generations with a concerted effort to eliminate those things. They’ve outdone themselves, in fact. 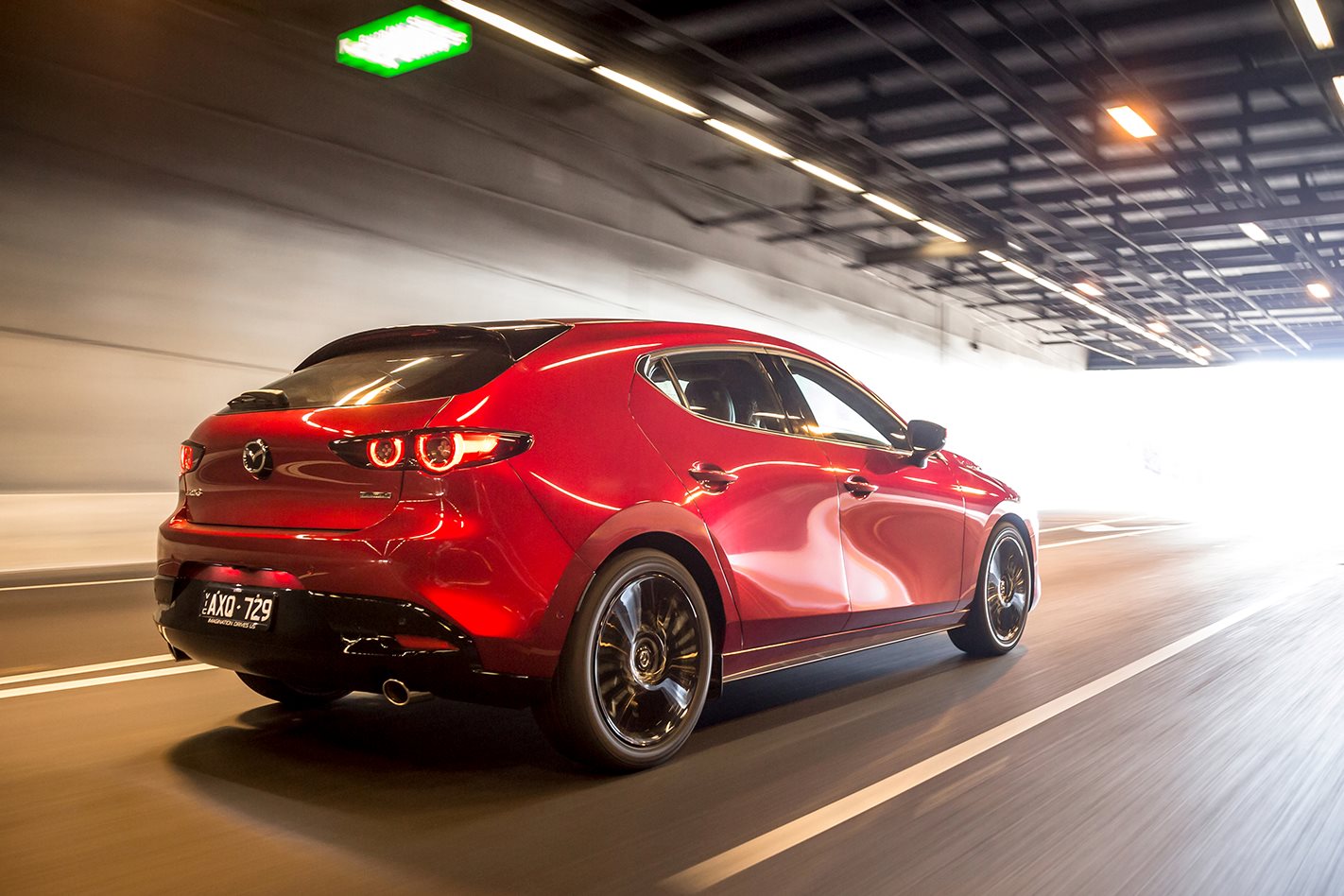 The only blot on refinement is the engine becoming a little bit vibey at idle, so drivers not yet accustomed to fuel-saving idle-stop may want to get used to it now. That aside, it’s a serene and quiet thing.

That’s helped by the general slick nature of the car’s drivetrain, suspension and steering. Everything feels like it’s operated via well-lubed mechanicals, with no unnecessary jolts or thumps to interrupt the transmission of power or the absorption of road imperfections. 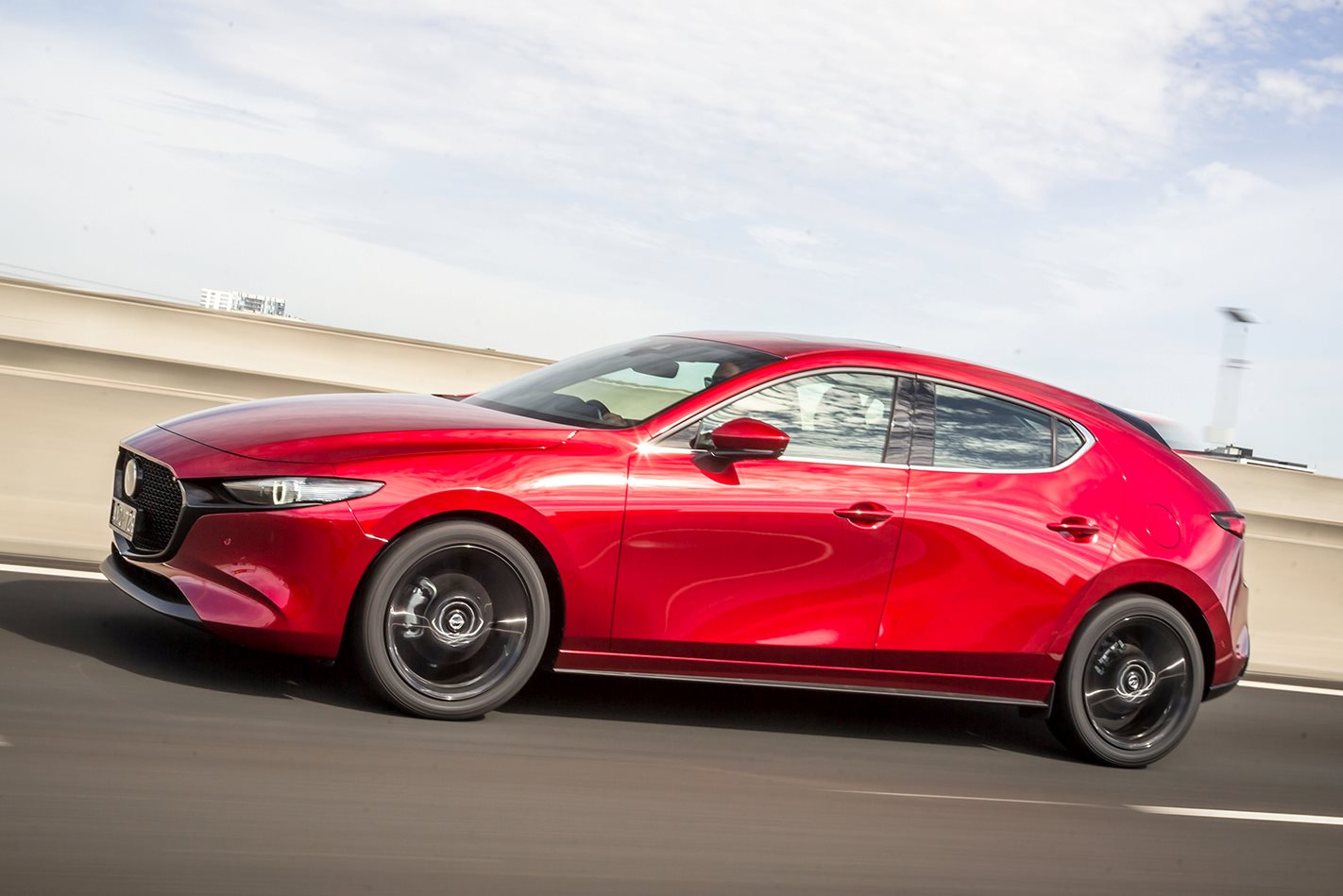 The ride is a touch firmer than some may like for a non-performance hatch, though it’s far from bone-shakingly stiff. Were we to complain about anything at all, it would be the fact that the engine is largely a carry-over unit from the old car, with the ‘G25’-spec 2.5 litre naturally-aspirated petrol four-cylinder making 139kW and 252Nm – middling numbers at this end of the small car segment.

It gets the job done and actually feels quite lively the harder you rev it (as it did in the third-gen model), but some may feel that it lacks the relaxed and effortless nature of turbocharged engines from European rivals. 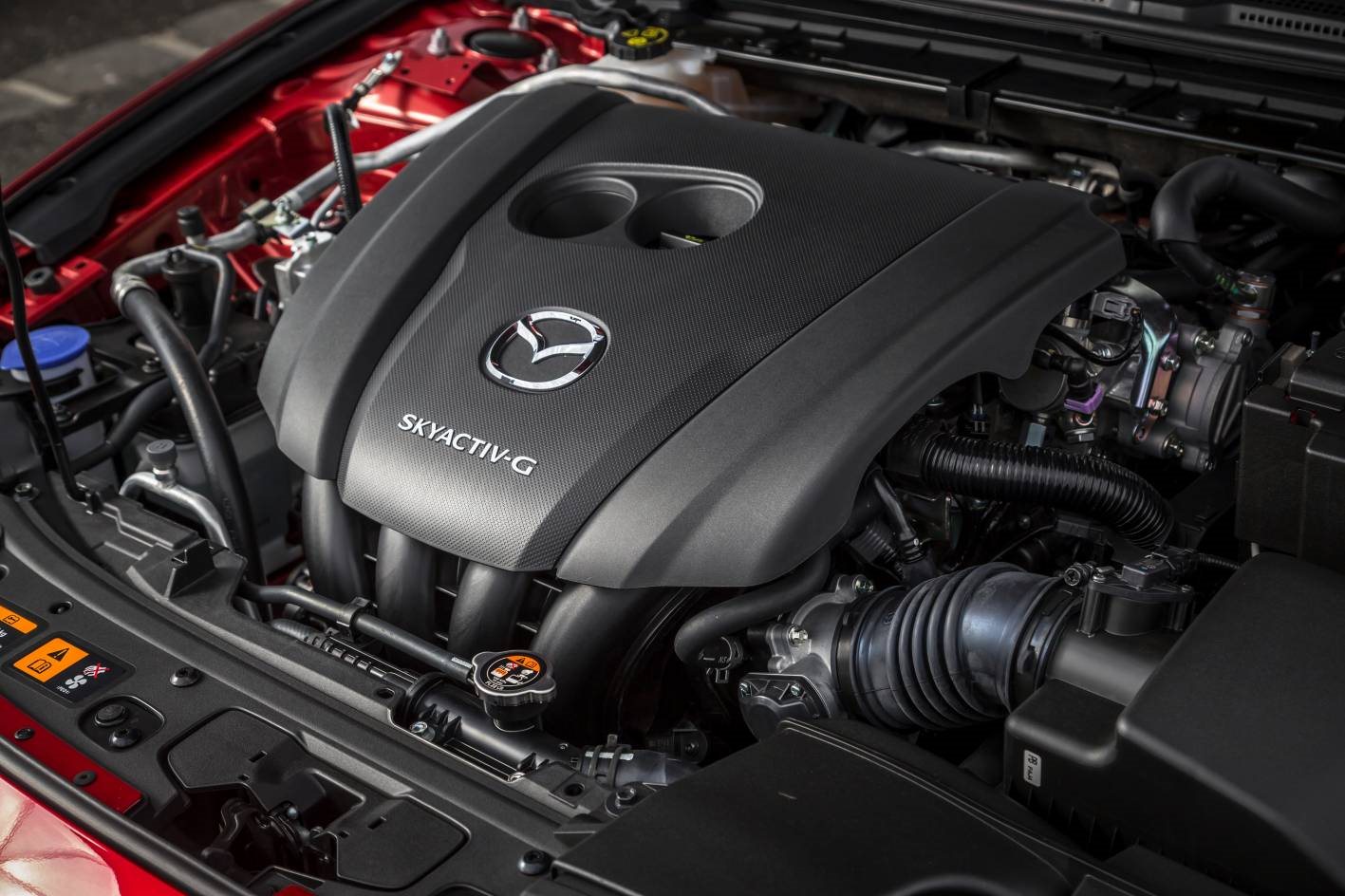 What it doesn’t lack, is rock-solid roadholding. Much has been said about Mazda’s decision to go from a multi-link rear suspension to a much less sophisticated torsion beam rear, but from the driver’s seat it doesn’t feel like a regressive step.

If anything, the new 3 handles with the same kind of confidence and composure as the model it replaces, and that’s good not just from a driver enjoyment point of view, but from a safety perspective as well. 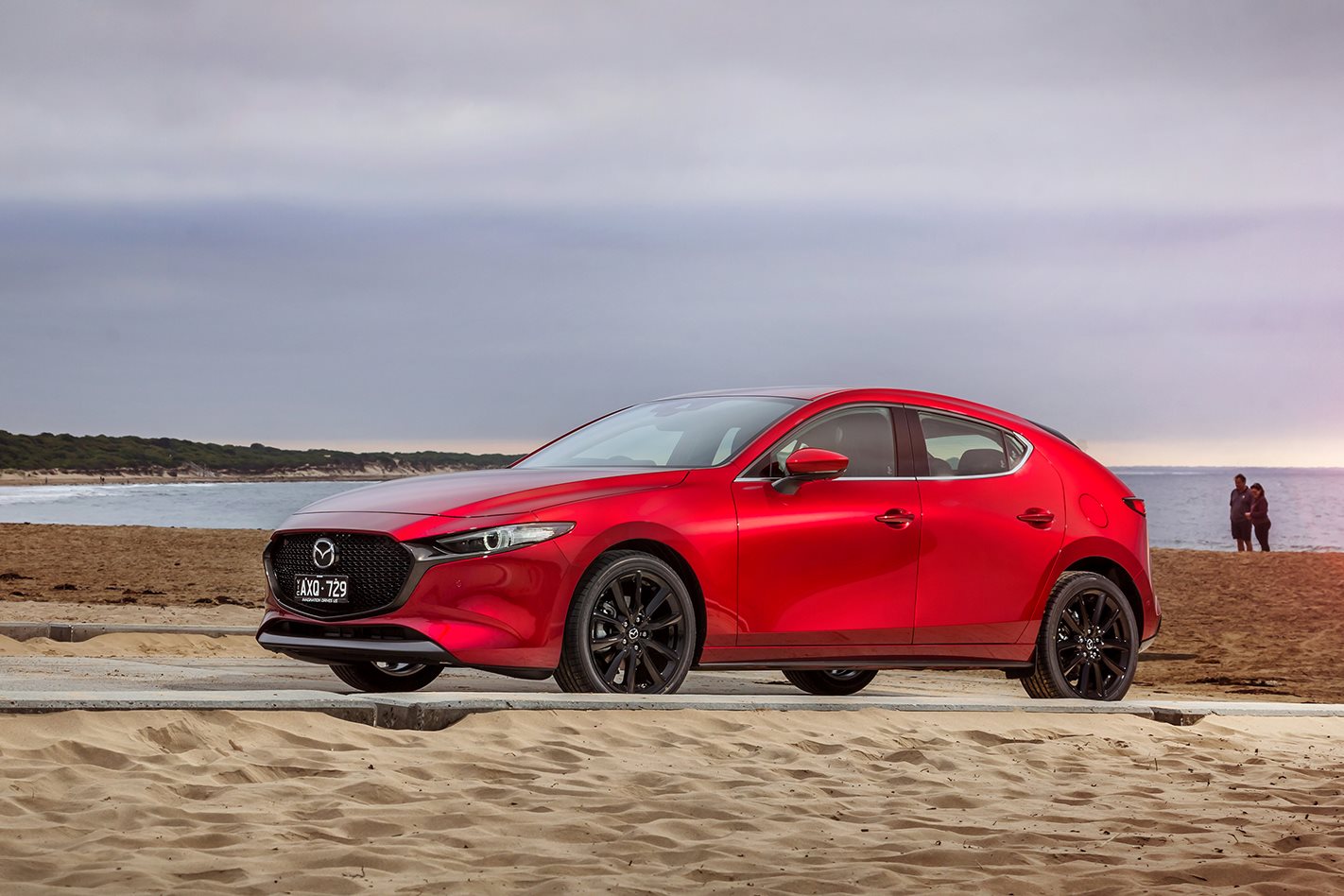 The ‘showroom wow’ factor of the new-gen Mazda3 is immense. Sit in it for just a few seconds and we challenge you to not be blown away by the high-end aura of the thing. Thankfully, that visual and tactile glitz is more than matched by rock-solid underpinnings, a great driving experience and luxury-like refinement, not to mention a standard equipment list that’s as long as your arm.

This car, the G25 Astina, sure isn’t cheap, but you aren’t just getting what you paid for: you’re getting what seems like a whole lot more. 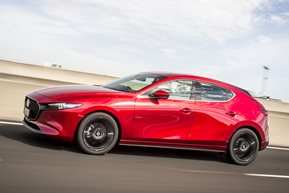