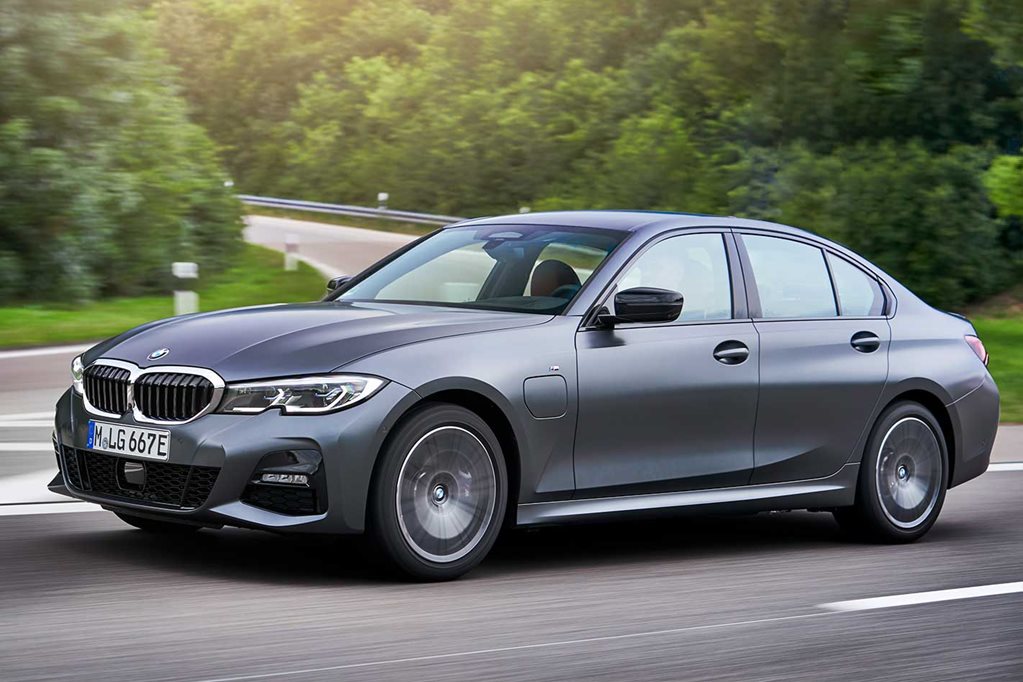 Plugging in to the latest electrified BMW 3 Series

For decades BMW’s nomenclature has been pretty easy to understand: models ending in ‘i’ were petrol (i standing for ‘injected’), those ending in ‘d’ were diesel and those ending in ‘e’ were economy variants, usually with less power but better fuel consumption than their ‘i’ siblings.

The latest BMW 330e does nothing to alter that – it’s still the most economical variant in the range – but that last letter could now stand for electrified. The 330e is a plug-in hybrid, or PHEV for short, which means it can be plugged in and run on electricity alone, use a regular combustion engine or a combination of the two. 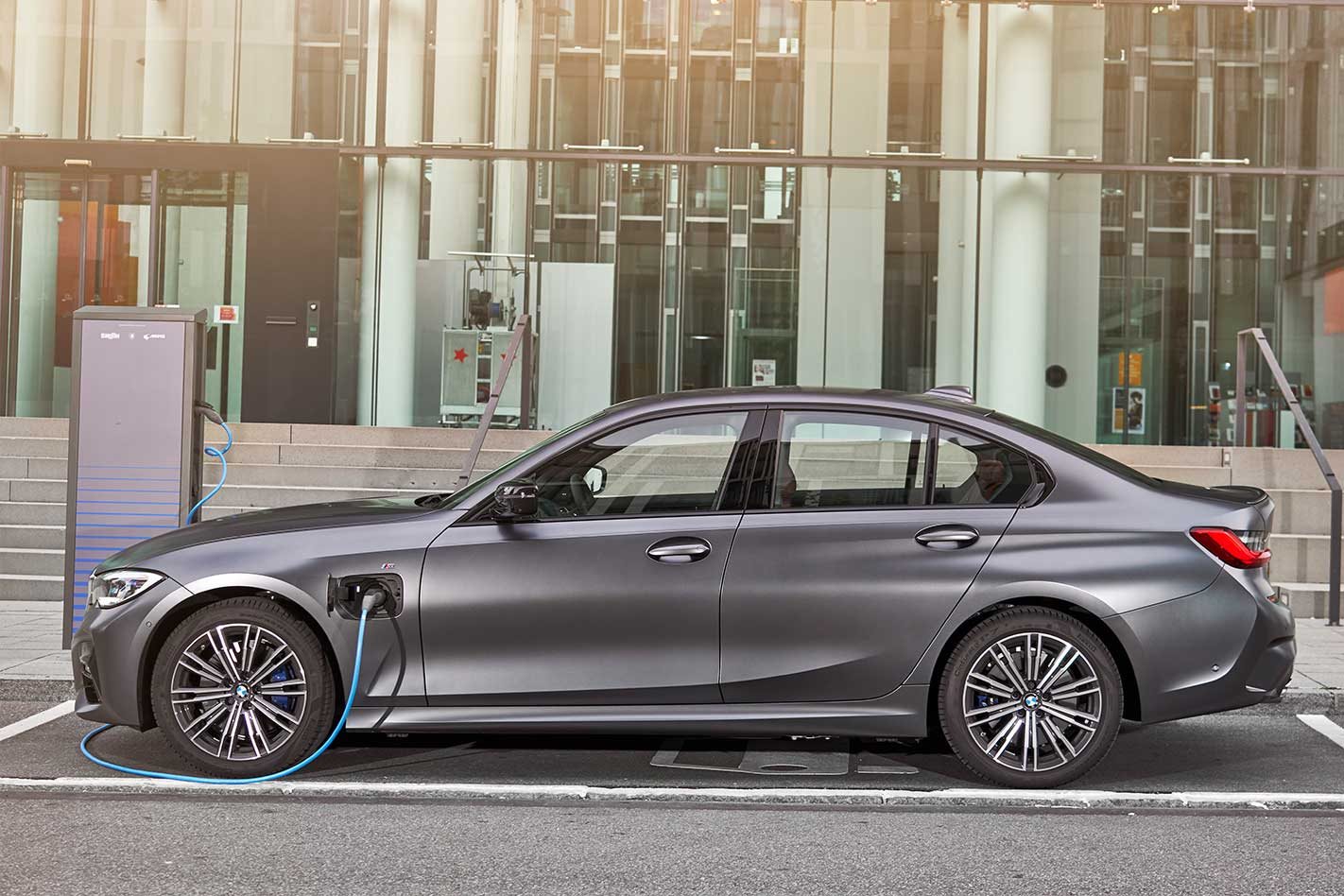 It sits snugly in the upper tier of the 3 Series range at $84,900, a $10,000 premium over the petrol-only 330i, but in return promises similar performance with much reduced fuel consumption.

Since consumption is likely to be the number one reason for a PHEV purchase, let’s start there. We drove the 330e in essentially the least efficient way possible; it was fully charged when picked up from BMW and received a half-charge once throughout the week but otherwise was just left to its own devices.

As such our recorded fuel economy figure of 6.42L/100km, achieved over 535km of highly varied urban, highway and country driving, could be seen as worst-case scenario for someone who lacks the ability or the desire to charge the car every night. 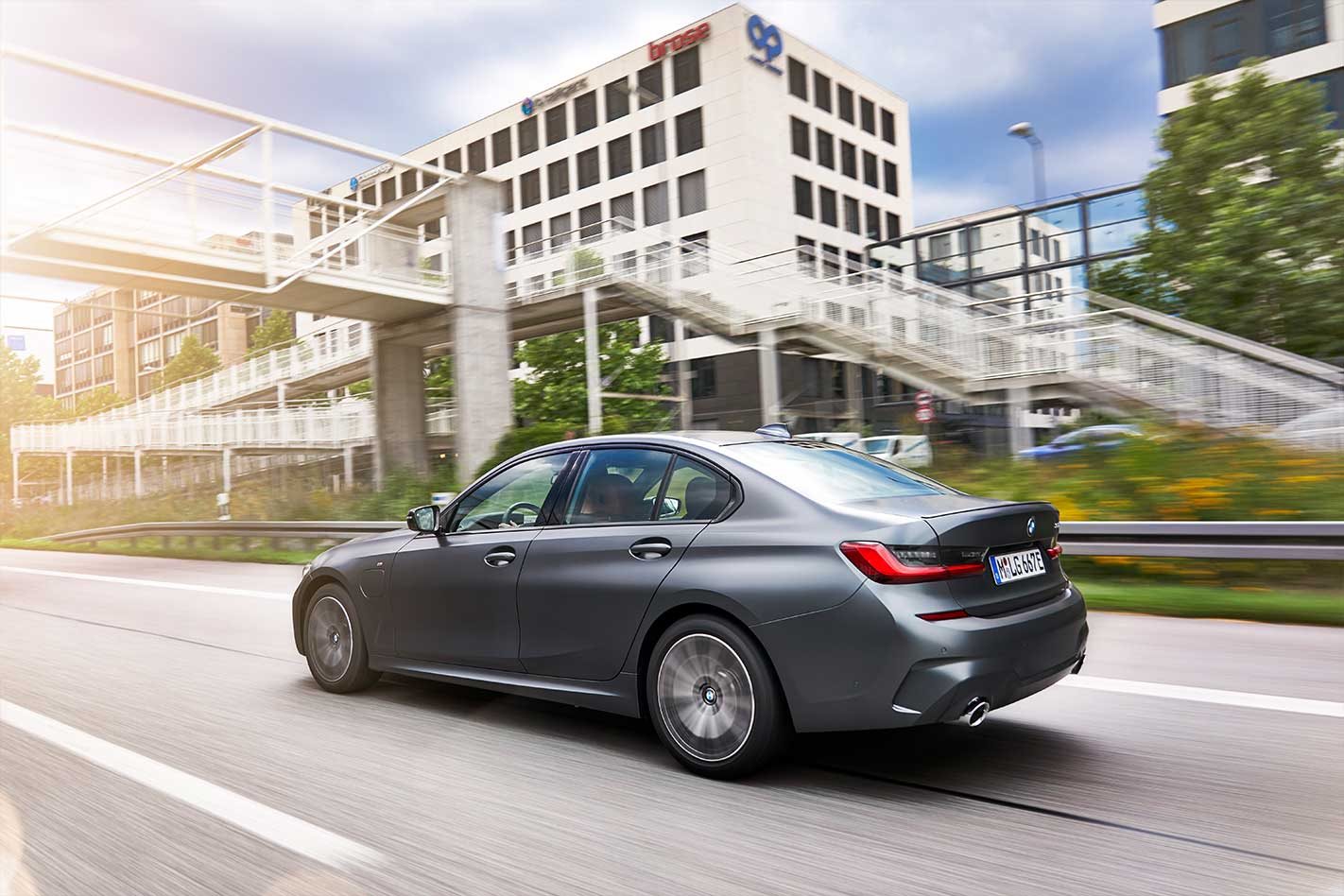 On the other side of the coin, charge the 330e’s 10.3kWh battery every night, a process that takes a quoted 2.5 hours using a 3.7kW charger, and you’ll enjoy around 40-45km of electric-only range, though less if you have a heavy right foot. This is an increase of around 50 per cent on the previous generation 330e.

READ WhichCar Electric Car Buyer's Guide
If your daily commute is less than this distance, then there’s every chance you could go days or weeks without needing to trouble the 2.0-litre turbocharged four-cylinder engine. BMW is betting on this, which is why it’s reduced the fuel tank size from 59L in the 320i to the 330e’s 40L. 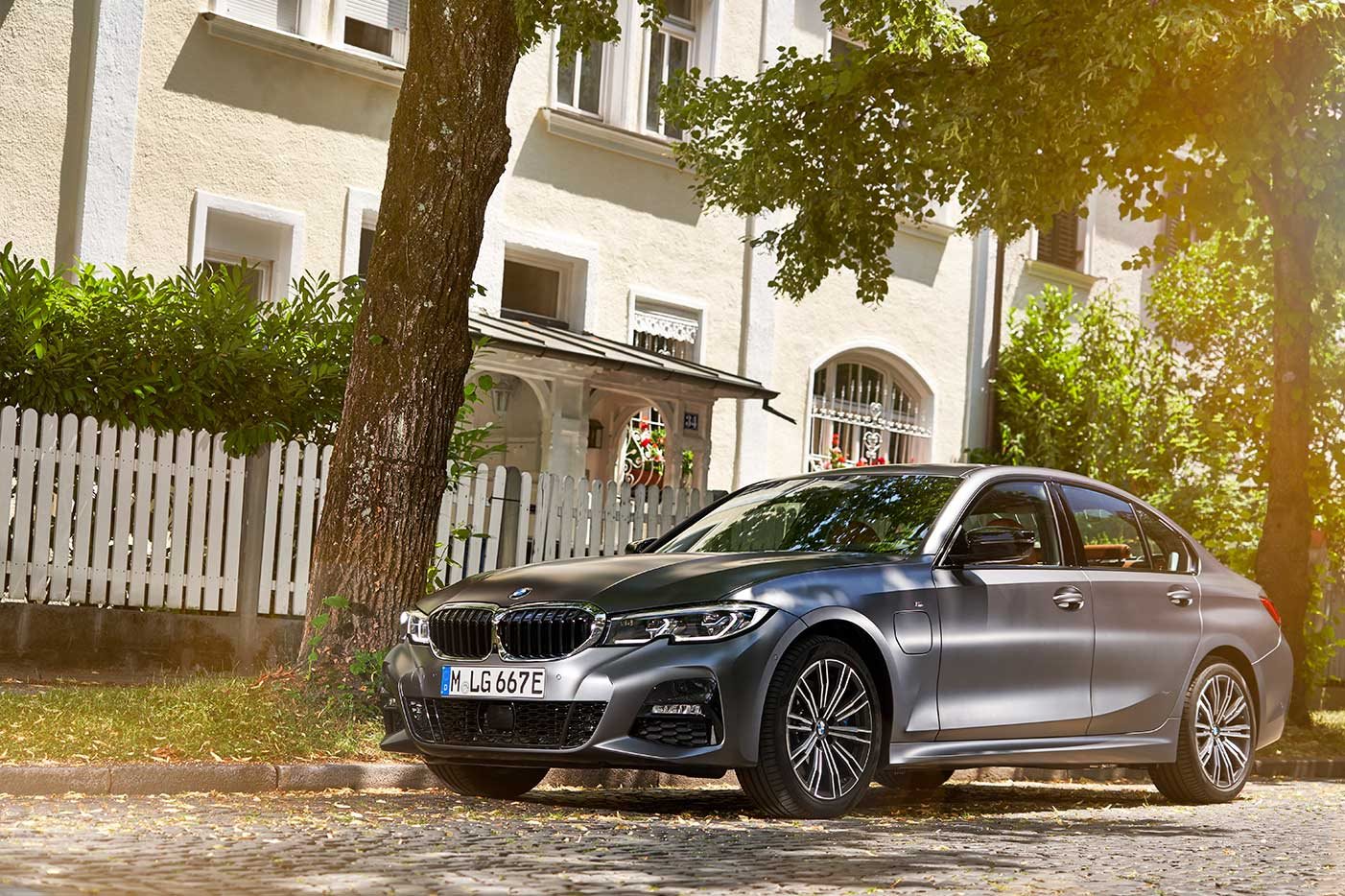 It’s possible to let the car juggle the use of petrol and electricity and it does so seamlessly, capturing energy and storing it in the battery when you lift off the accelerator or brake and deploying it when you press the throttle once again.

With some familiarity, however, the driver is able to choose how and when to use the electricity. For example, a family trip from Melbourne to Geelong began with a depleted battery but by ‘locking out’ the battery system using a button on the centre console, the highway journey was completed using the petrol engine. 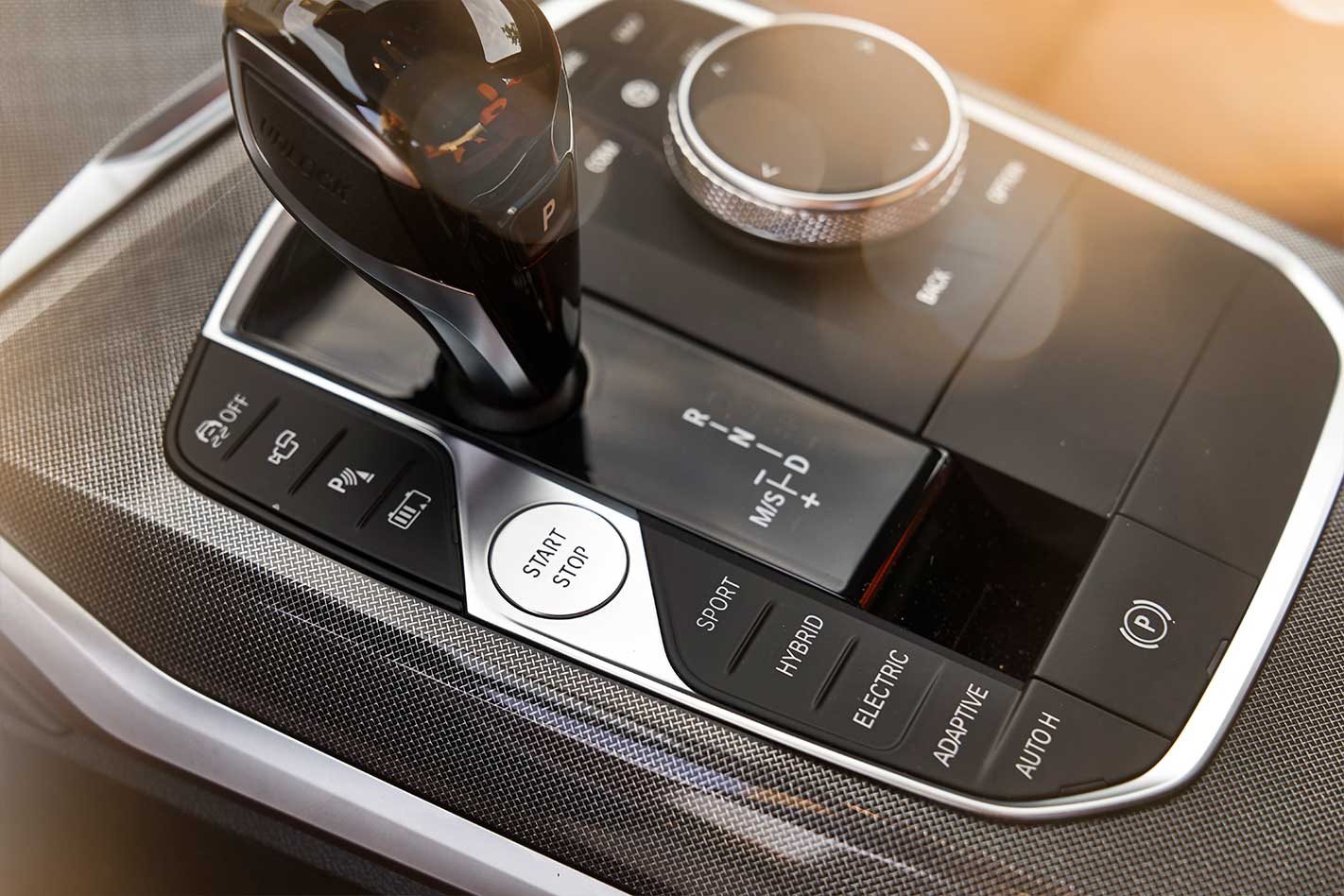 On the way the car was constantly adding juice to the battery, filling it by the time we reached Geelong and allowing all urban driving to be completed using only the electric motors. This process allows you to use each propulsion system where it’s most efficient: petrol for the highway and electricity for stop-start driving. It’s very clever.

You needn’t be feather-footed, either, as the 330e will remain purely electric up to 40 per cent throttle and 110km/h in Hybrid mode, or up to 140km/h in Electric mode. However, the hybrid system also has the ability to improve performance. 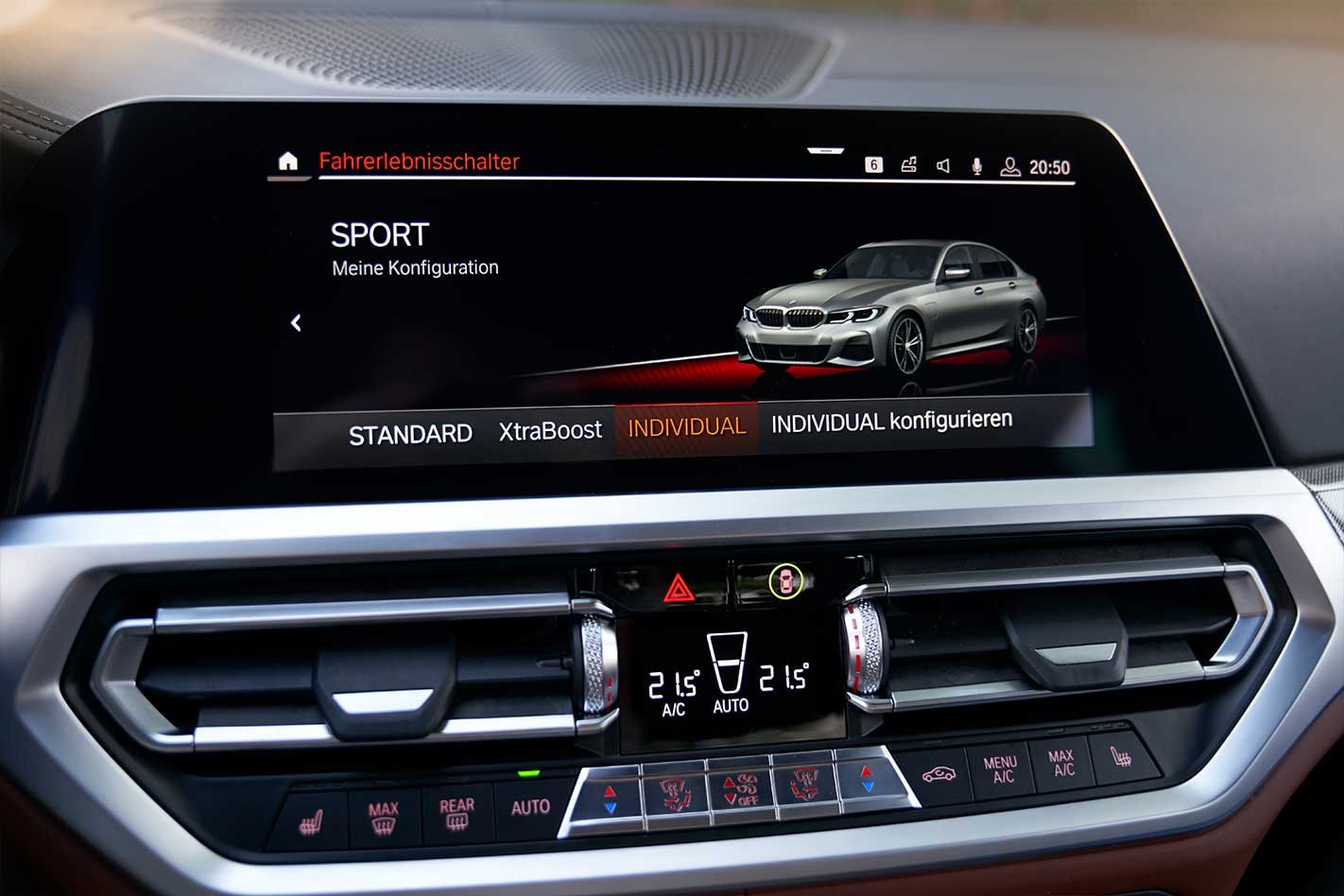 In reality it doesn’t quite feel that quick, however the instant torque delivery of the electric motor provides a pleasing punch in the back when you floor the throttle, to the extent that care is needed exiting tight corners (particularly in the wet) lest the rear wheels spin (with the DSC system in its more lenient Sports mode, at least).

In contrast, with an empty battery you’re left with a fairly uninspiring petrol engine left lugging a heavy car, the hybrid gubbins adding an extra 280kg, mainly thanks to the batteries which live under the rear seat. These also reduce boot space from 480L to 375L, though the rear seat can be folded 40:20:40 to increase space if need be. 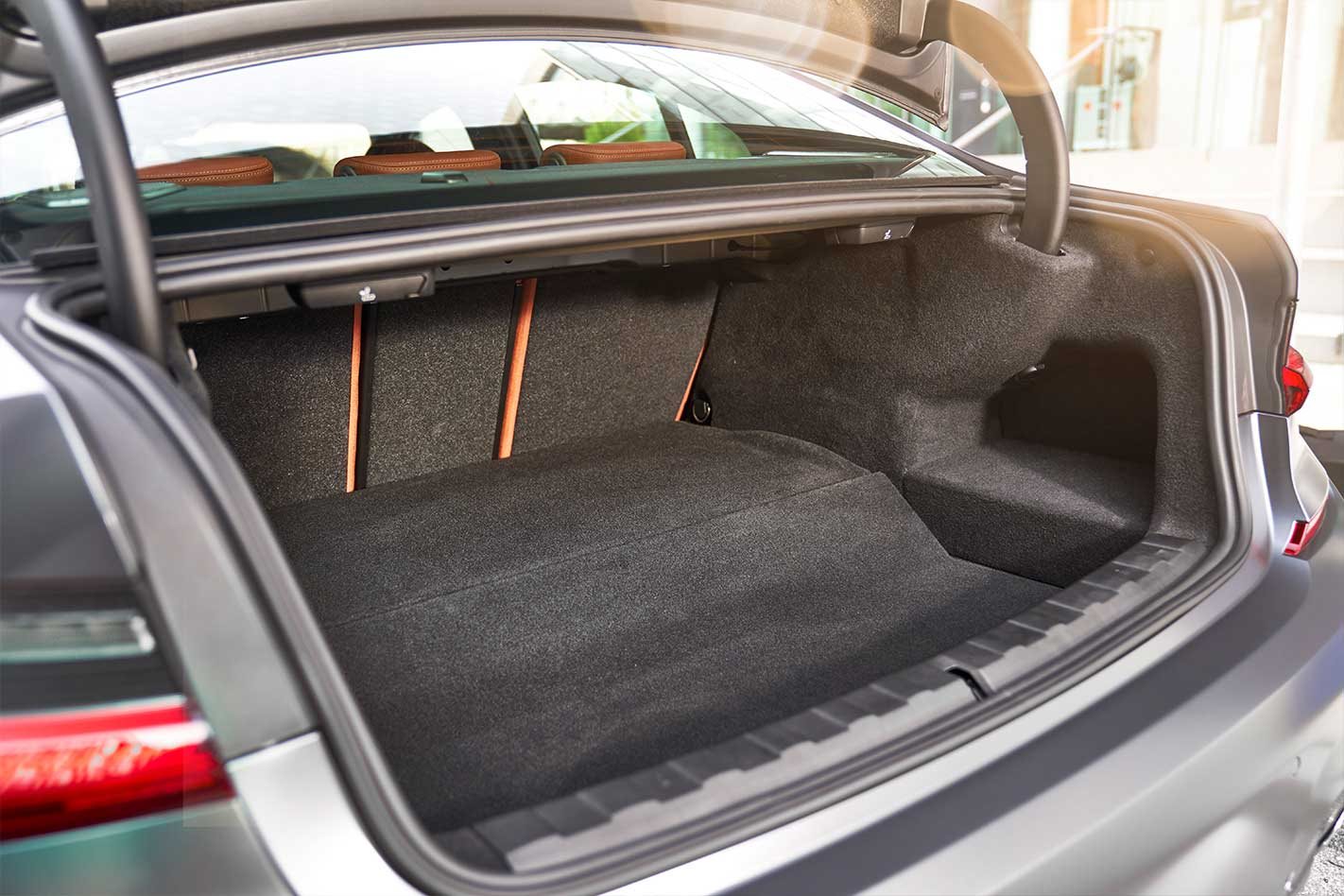 This added heft does affect the 330e’s handling slightly, but is only really noticeable when driving very enthusiastically. The trademark BMW balance is still there and this remains an enjoyable car to drive, but the tyres do give up a little earlier due to the extra load.

The steering is a little heavy for my tastes and the wheel itself is very thick, but ergonomically the driving position is great. In general the ride is comfortable, but despite the standard adaptive dampers, which adjust to the road and can be made stiffer in Sport mode, it can be jittery on rough surfaces.

Their inclusion is welcome, though, the 330e’s specification mirroring that of the 330i. As such larger M Sport brakes are standard, as are 19-inch alloy wheels, keyless entry and go (dubbed Comfort Access in BMW-speak), ‘Vernasca’ leather upholstery, Driving Assistant Professional and Parking Assistant Plus. 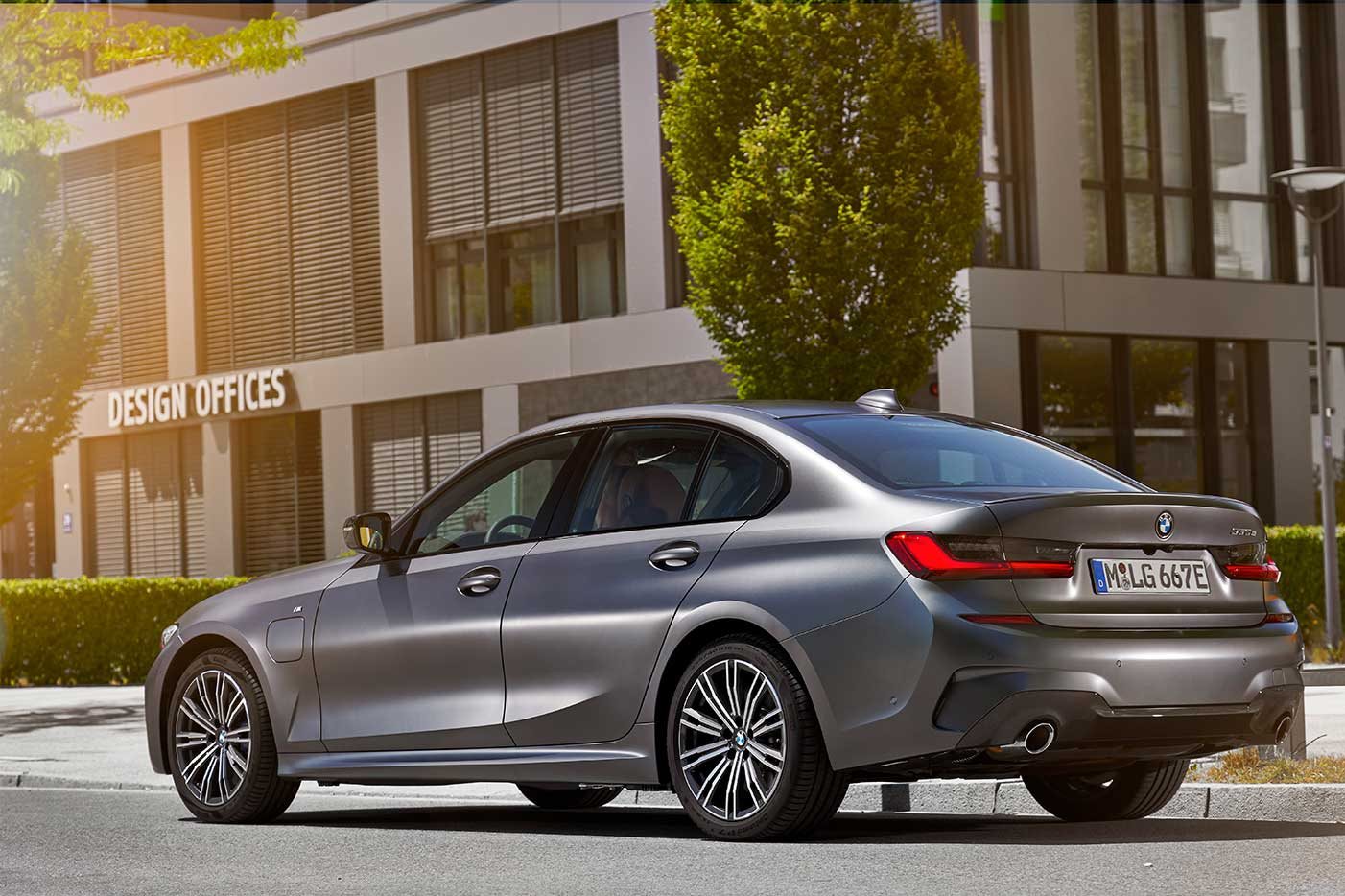 READ Active Safety Systems Explained
This gives the 330e the ability to effectively drive itself on the highway, though constant driver inputs are required to keep the system active. However, unfortunately the calibration still needs work, particularly when merging off the main road, the lane keep aggressively trying to keep the car going on the original path.

In the vast majority of circumstances it works well, but these moments badly shake confidence in the system.

Parking Assistant Plus includes not just the usual rear-view camera and parking sensors but a ‘top-down’ surround view camera and the ability to self-park where space allows. 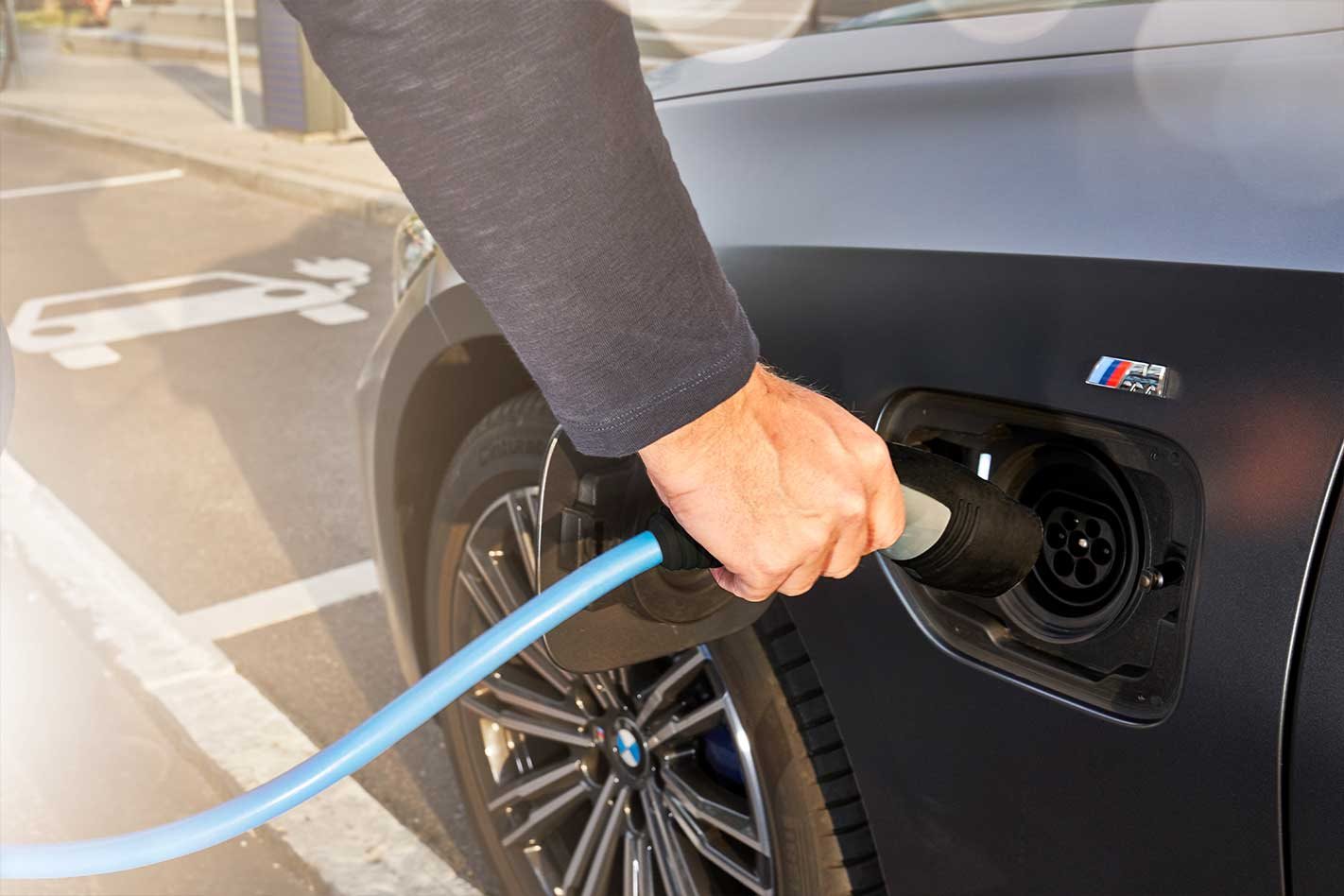 However, it also has Active Park Distance Control which slams on the brakes if it deems you’re getting too close to an object. It’s a handy feature if it stops you damaging the car, however if scared the hell out of me when it deemed the flowers in my front yard a threat.

All this is in addition to the equipment found in every 3 Series, which includes an M leather steering wheels, electric sport seats, a 12.3-inch digital instrument display, 10.25-inch central infotainment screen with BMW Connect that allows certain functions to be used via the smartphone app (navigation destinations, air-conditioning, car finder), wireless smartphone charging, adaptive LED headlights and a 12-month Apple CarPlay subscription. 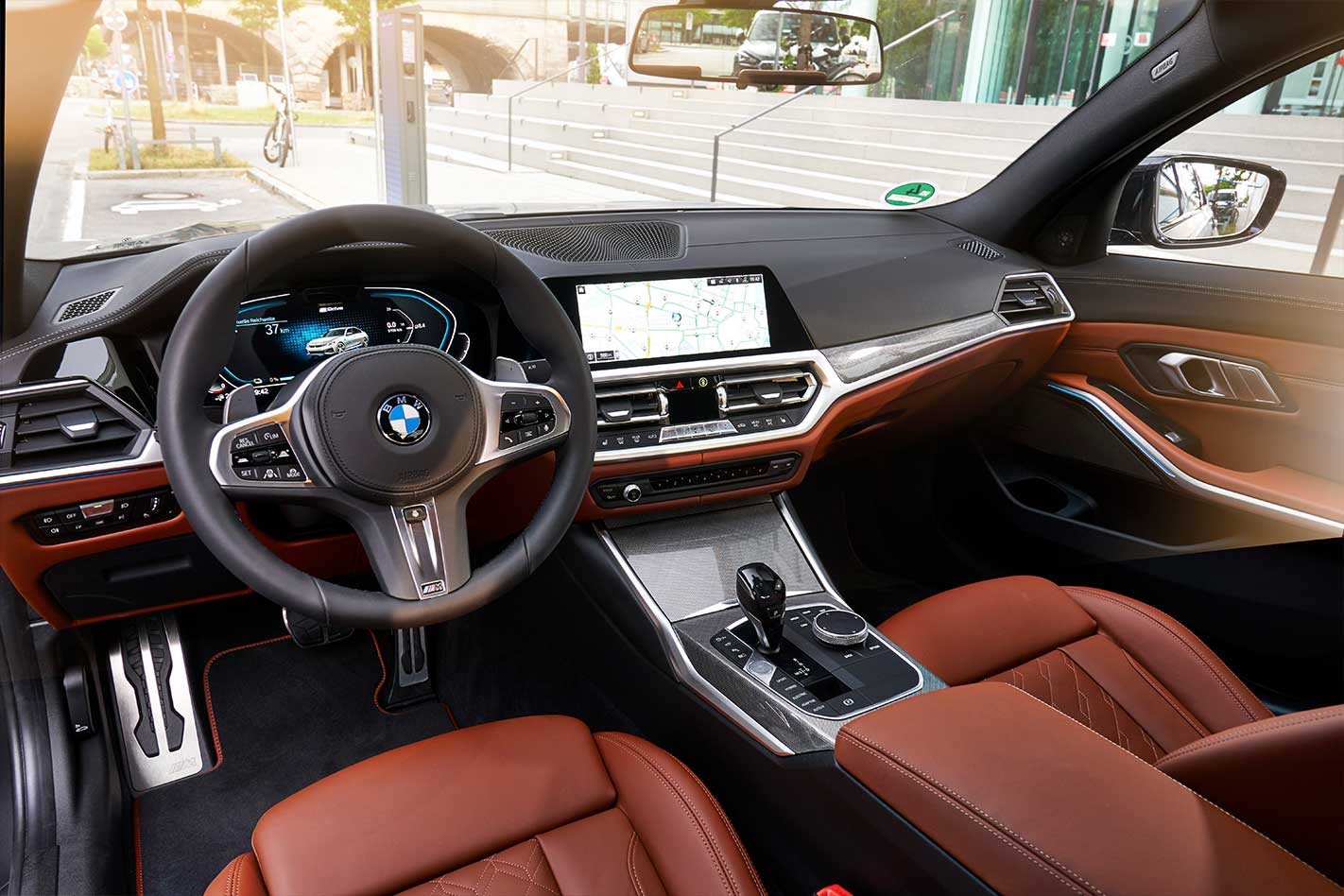 For no cost buyers can swap the standard ‘M Sport’ equipment for ‘Luxury Line’, which raises and softens the suspension, adds chrome exterior and wood interior trim and a different steering wheel. It’s a personal choice, but this does seem to suit the 330e’s character better.

There are two solid and eight metallic paint colours to choose from, six leather colours and five different trim options, though much of the latter is only available after selecting Luxury Line. 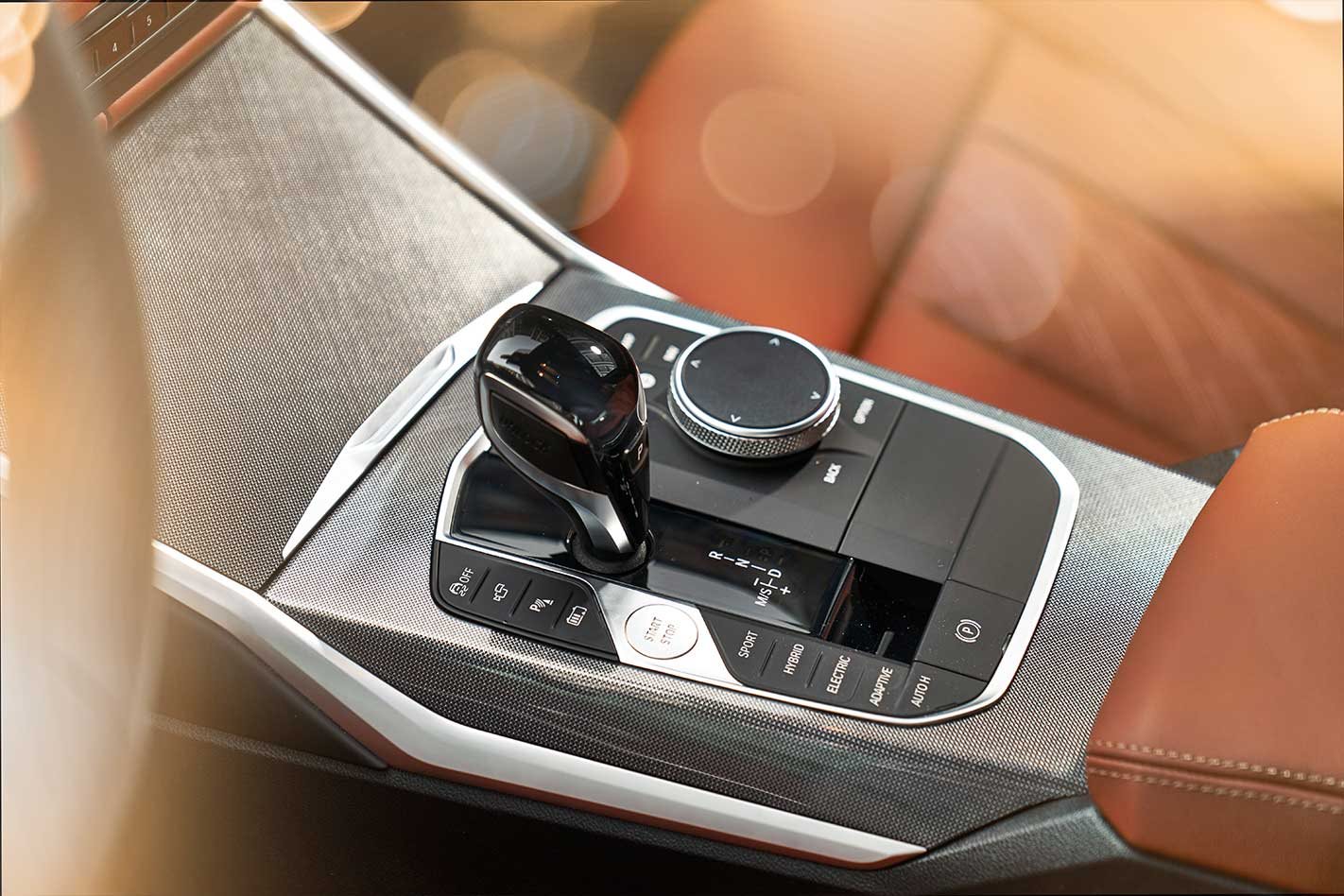 Further individual options include a Harmon Kardon stereo, heated steering wheel and rear seats and the BMW Drive Recorder, which uses the parking cameras to record driving situations and will automatically record in the event of an accident. A handy feature. Ten 40-second clips can be stored.

All in all the 330e is an intriguing car. In purely economic terms it makes no sense, as the price difference between it and the 330i on which it’s based will buy many years’ worth of fuel.

However, if your driving consists of a lot of short distances or you like the idea of an electric vehicle but don’t have the necessary charging infrastructure then the 330e is a compromise-free way of entering the zero-emissions world.