Kia’s Rio is an attractive light hatch that offers the choice of three or five doors. It is quite fun to drive, and even the least expensive version is well equipped. The Korean brand’s seven-year, unlimited kilometre warranty is the best in the business.

This review covers Kia Rios on sale new prior to February 2017.

The lethargic performance of your automatic Rio, if you have bought one of the less costly versions: the Rio S, or S Premium. A friend’s new Mazda2 or Volkswagen Polo, for example, will feel much more lively than these.

The Rio drives its front wheels, and it is classed as a light car, lower priced.

Power windows and air-conditioning, and a CD/radio audio system with iPod connectivity and an MP3 storage facility.

A hill-assist system, which operates the brakes automatically to make take-offs on hills easier.

Six airbags: two directly in front of the driver and front passenger; one alongside each front occupant to protect the upper body; and a curtain airbag on each side to protect the heads of front and rear occupants.

The 1.4-litre petrol four-cylinder found in the less costly Rios, the Rio S and S Premium models, is the most economical engine, provided that you want one with a manual gearbox. These use 5.7 litres/100km on the official test (urban and country combined).

However, Rios with this 1.4-litre engine feel less responsive and slower than most new light cars. And that is especially true of the 1.4 automatics.

If you want an automatic Rio, then the 1.6-litre petrol four cylinder fitted to the more expensive models – the Si, Sport and SLi – is just as easy on fuel as the cheaper alternative, consuming 6.1 litres/100km. These Rios accelerate much more strongly, as well.

The 1.6 is a more modern engine that has direct petrol injection, a technology that helps it save fuel while producing more power.

Spending more money on a Rio initially buys you a pair of rear doors. The Rio S five-door has the same features and equipment as the least costly model, the Rio S three-door, and costs about $1000 more.

Spending more again for the S Premium gets you cruise control, adjusted from buttons on the steering wheel. Wheels are the same 15-inch size but of a more attractive design in lightweight aluminium alloy (including the spare wheel). There is a premium steering wheel, which is nicer to hold, and front foglights.

Stepping further to the Rio Si gets you the more powerful, 1.6-litre direct-injection engine, as well as 16-inch aluminium alloy wheels with slightly wider and lower-profile tyres, and a more appealing interior with soft-touch dashboard and door trims.

The two remaining Rios, the Rio Sport and the Rio SLi, offer you alternative ways to dress up the 1.6 litre engine.

The Sport, as its name suggests, takes the sportier route, and has only three doors. It gets you another step up in wheel size, to 17 inches, and has fake-leather seats, and bare-metal control pedals. Headlamps switch on automatically when it gets dark. There are long-lasting LED daytime running lamps. And there are static cornering lamps on each side at the front: as you turn the steering wheel to enter a corner at night, these light up and illuminate your path.

The Rio SLi is a better equipped version of the five-door Rio Si. Like the Sport, it has the bigger wheels, auto headlamps, LED running lamps and cornering lamps. However, its seats are cloth but with leather accents. It also has rear parking sensors, which indicate how close you are to objects behind when reversing, and windscreen wipers that operate automatically when it rains. And its air-conditioning has climate control, which maintains a set temperature.

Only white is a standard colour, on all but one Rio. The other eight shades available carry an additional premium paint charge. The exception is the Rio Sport, on which Digital Yellow is standard and the other two shades cost extra.

It is easy to get comfortable in the driver’s seat of the Rio, which offers six-way adjustment, including height adjustment. The steering wheel’s angle and distance from the driver are also adjustable.

The Rio cabin is roomy and the instruments and controls are neatly and logically laid out. The fit and finish of the interior is of a good standard.

The suspension is taut yet comfortable: the Rio is right at home on patchy urban and city streets – if slightly less absorbent in Si, Sli and Sport form.

The Rio is quite well insulated inside: levels of tyre, suspension and wind noise in the cabin are moderate.

Every Kia Rio attains a safety rating of at least Very Good.

The Rio has light-car staple safety features such as side and curtain airbags, and items that are now found in all new cars such as electronic stability control.

In addition, it has a standard seatbelt reminder system. This is a simple but valuable safety feature for those with children old enough to fasten and unfasten their own seatbelts.

All Kia Rios offer some driving enjoyment, and the more expensive versions offer more than the others. However, there are far better light-car choices if great steering and handling are important to you.

The Rio’s electrically assisted power steering is just right in its weighting, and lends the hatch a feeling of agility. The Rio feels secure on the road. Its firm-ish suspension contains body roll and pitch, and helps make the handling responsive.

The 1.4-litre engine lets the car down, for driving fun. The 1.6 in the Si, SLi and Sport offers about 30 per cent better acceleration, and with its superior gearbox spends more time in its happiest working range.

The Rio has plenty of room in the front and the back, thanks to a generous 2570mm wheelbase and good interior packaging.

Good vision, ergonomics and noise suppression make the Rio a relaxing prospect for longer drives of up to two hours at a time.

The rear seat is among the best in a light car for the leg and head room available, and for the comfort of the seat cushion. The standard cloth trim feels hardy and is comfortable.

The back seat can carry three passengers, with lap and sash belts for all.

The Kio also has one of the biggest cargo bays in a light car. It swallows 288 litres with the 60/40 rear seatbacks upright.

With the seatbacks lowered, cargo volume increases to 923 litres loaded to the roof – which is as good as most.

The Kia Rio is manufactured in South Korea.

The effortless low-speed accelerator pedal response of turbocharged light cars such as the Renault Clio and Volkswagen Polo, if you’ve ever test-driven them.

The latest active safety features, such as automatic emergency braking, are not available on the Rio. The Mazda2 offers low-speed auto braking as an extra-cost option, for example.

The ability to use and view apps from your smartphone on the car’s dashboard-mounted touchscreen, via Apple CarPlay or Android Auto. The smaller Holden Spark offers this feature, for example.

Other light cars worth considering include the Honda Jazz and Suzuki Swift.

If you would be happy with something a bit smaller, you could also look at the Kia Picanto, on sale as an all-new model about May 2016.

Certainly. The Rio Si is our choice. Its direct-injected 1.6-litre engine and six-speed automatic gearbox transforms the Rio from an okay car into a good one. However, the Si is a relatively expensive light car. There are excellent alternatives available from other makers at this price or below it.

A mostly-new Rio arrived about January 2017. It brought more room inside, improved handling and better smartphone integration. However it carried over the 1.4-litre four-cylinder as the only engine available at launch, dropping the direct-injected 1.6-litre. 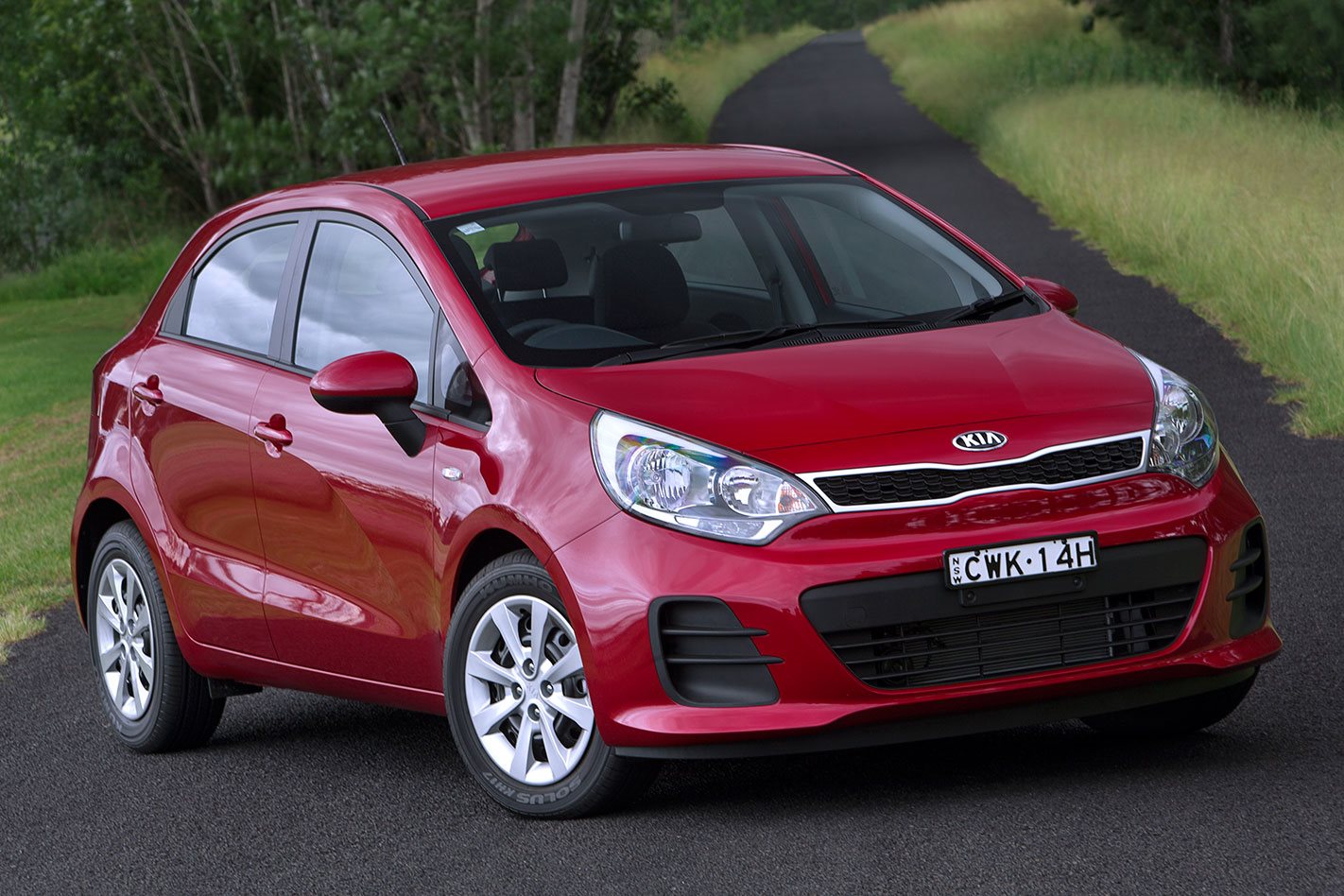 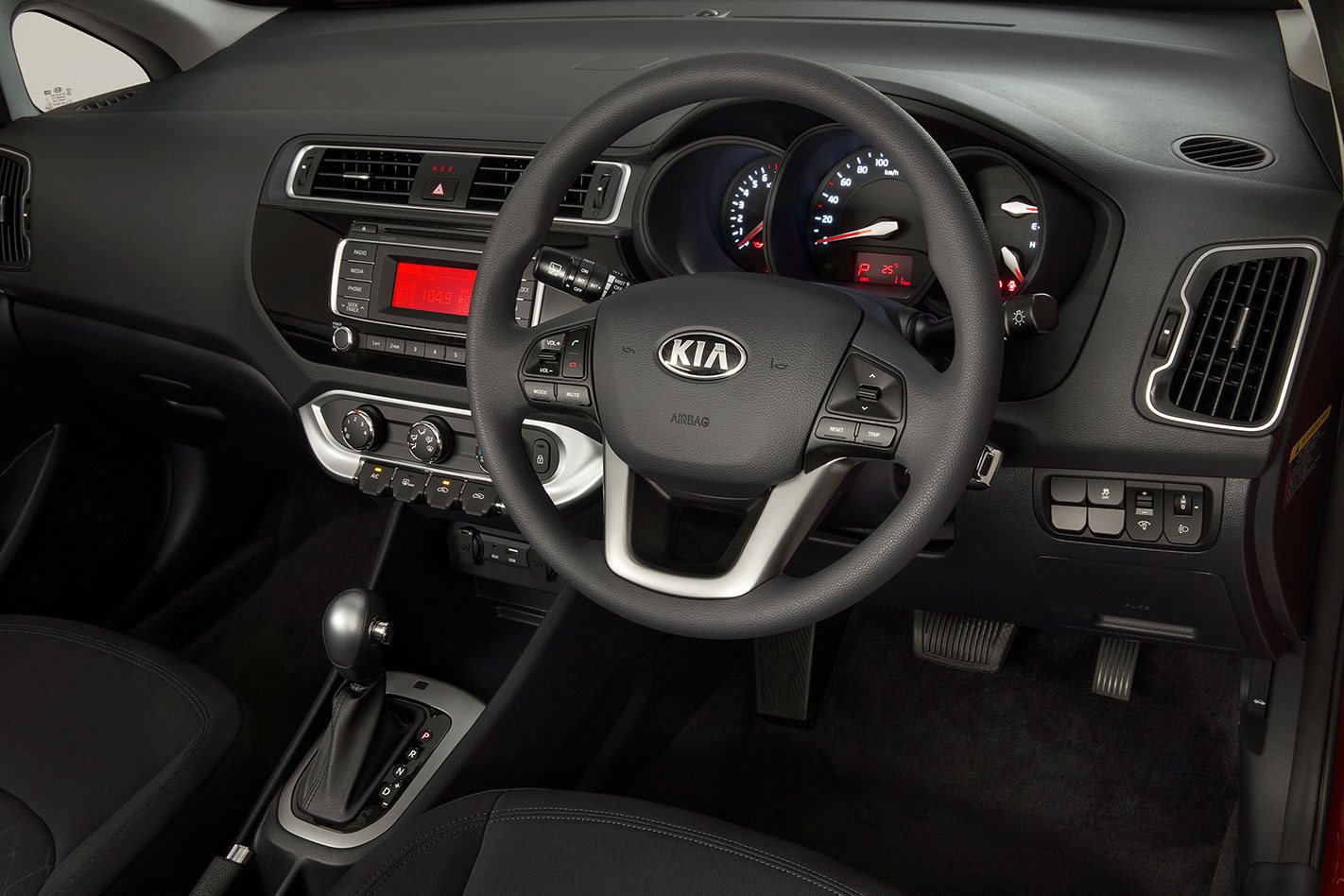 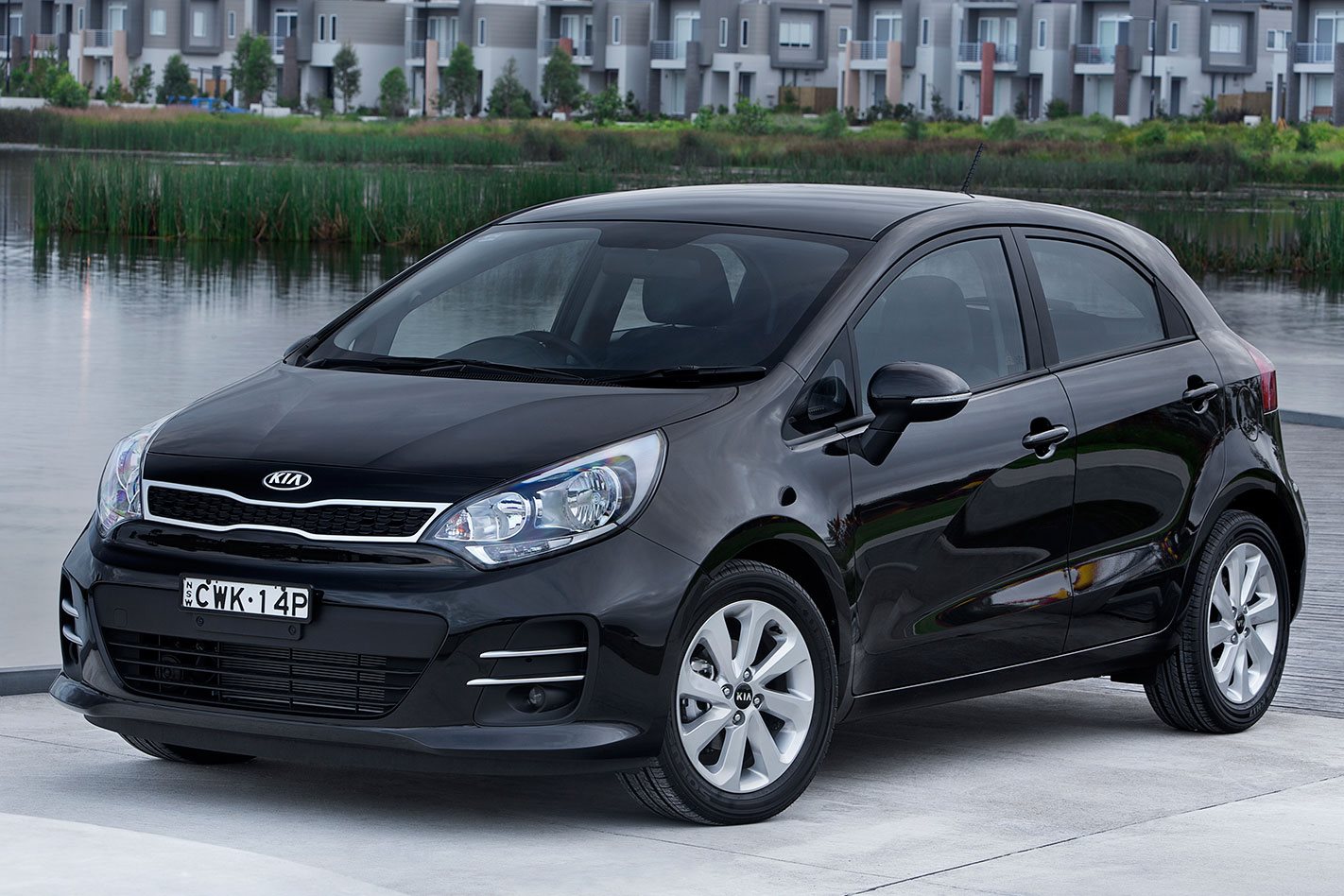 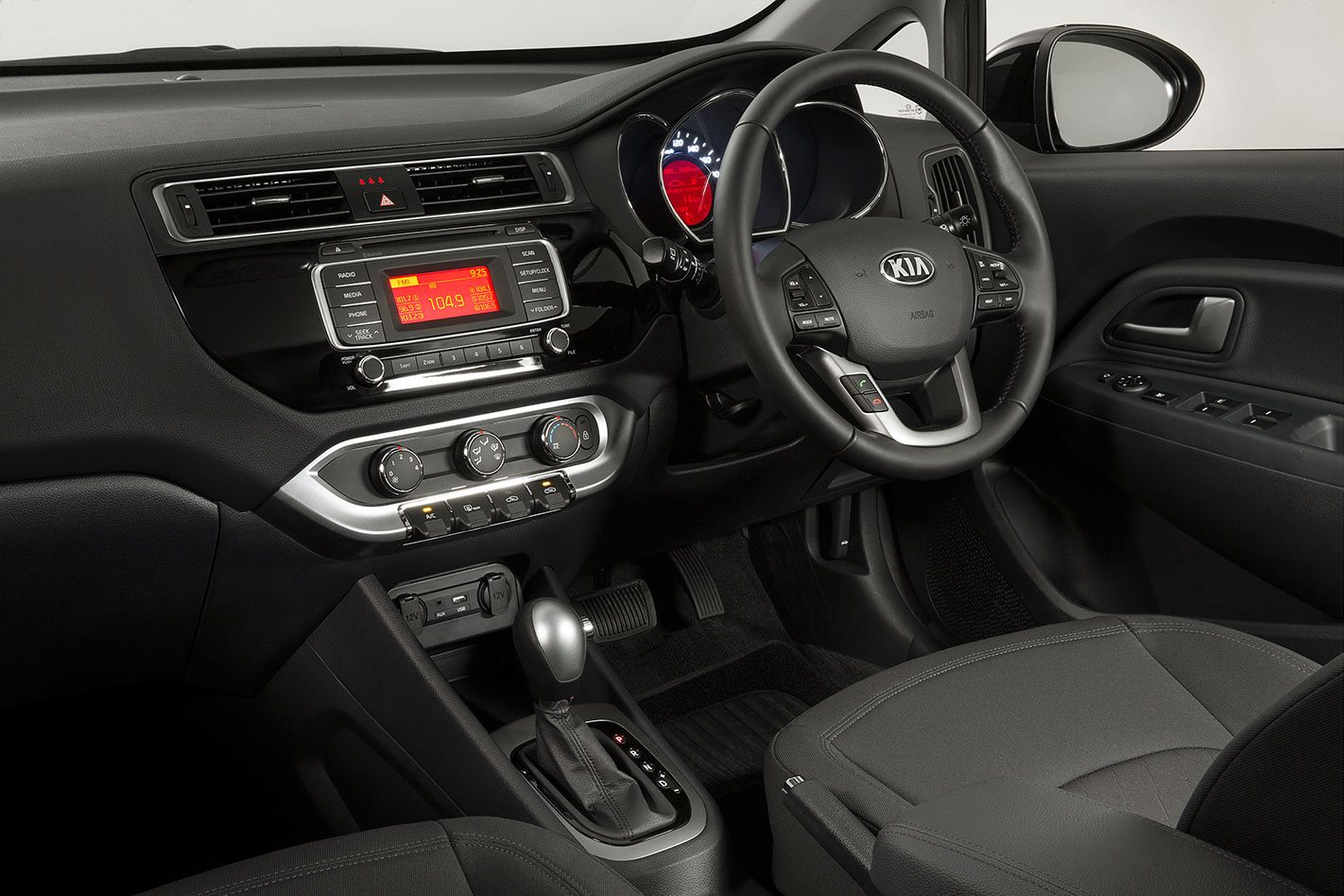 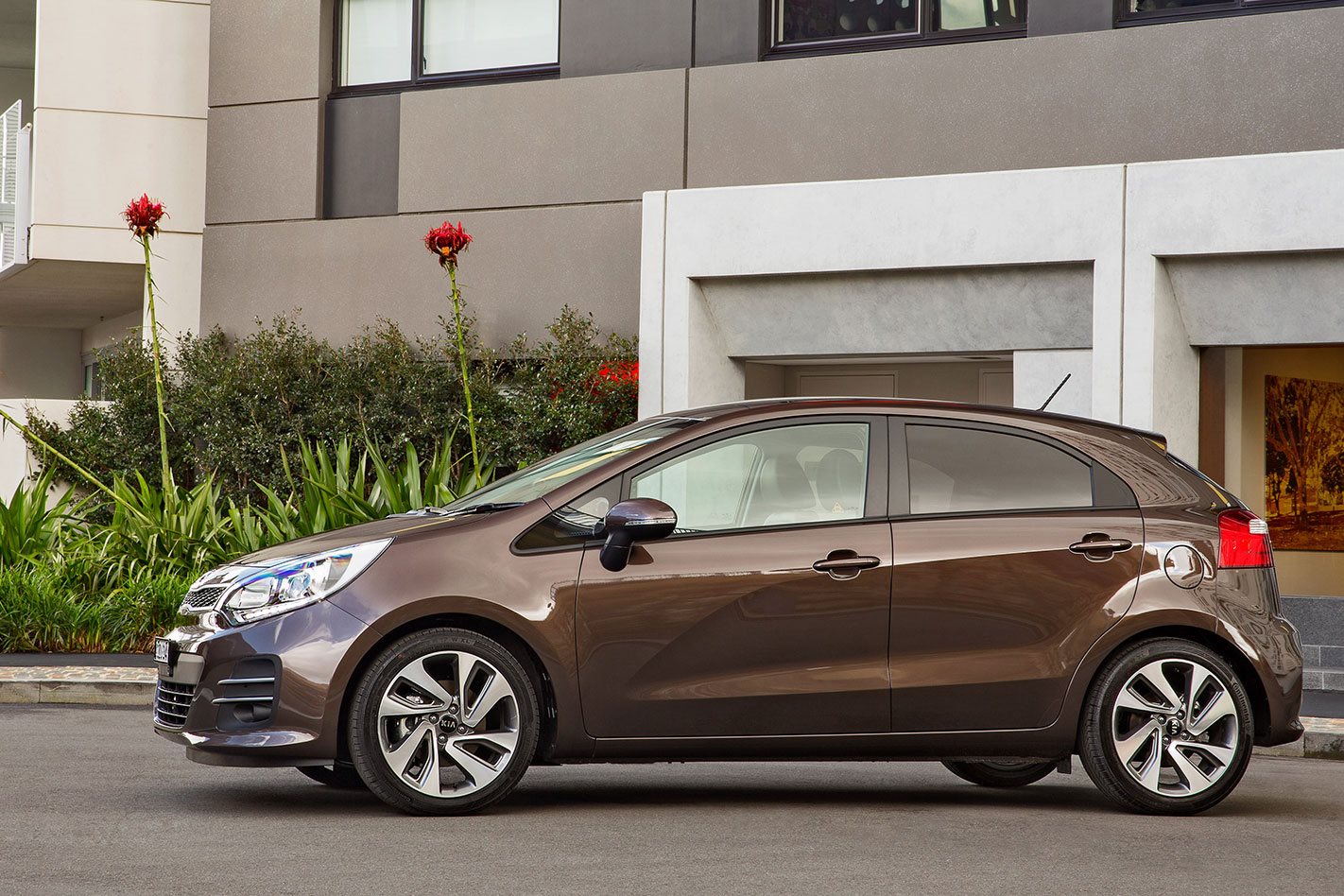 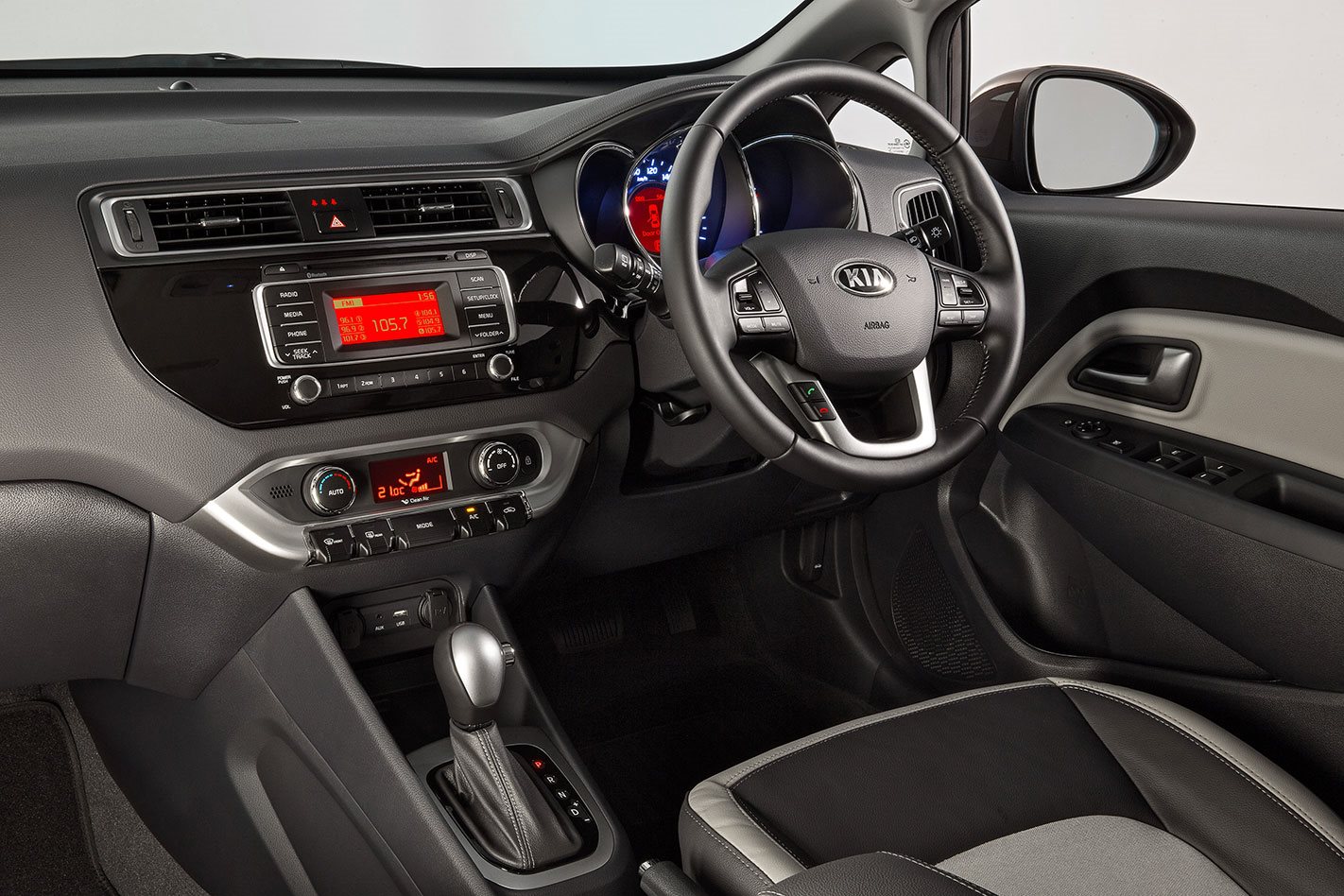 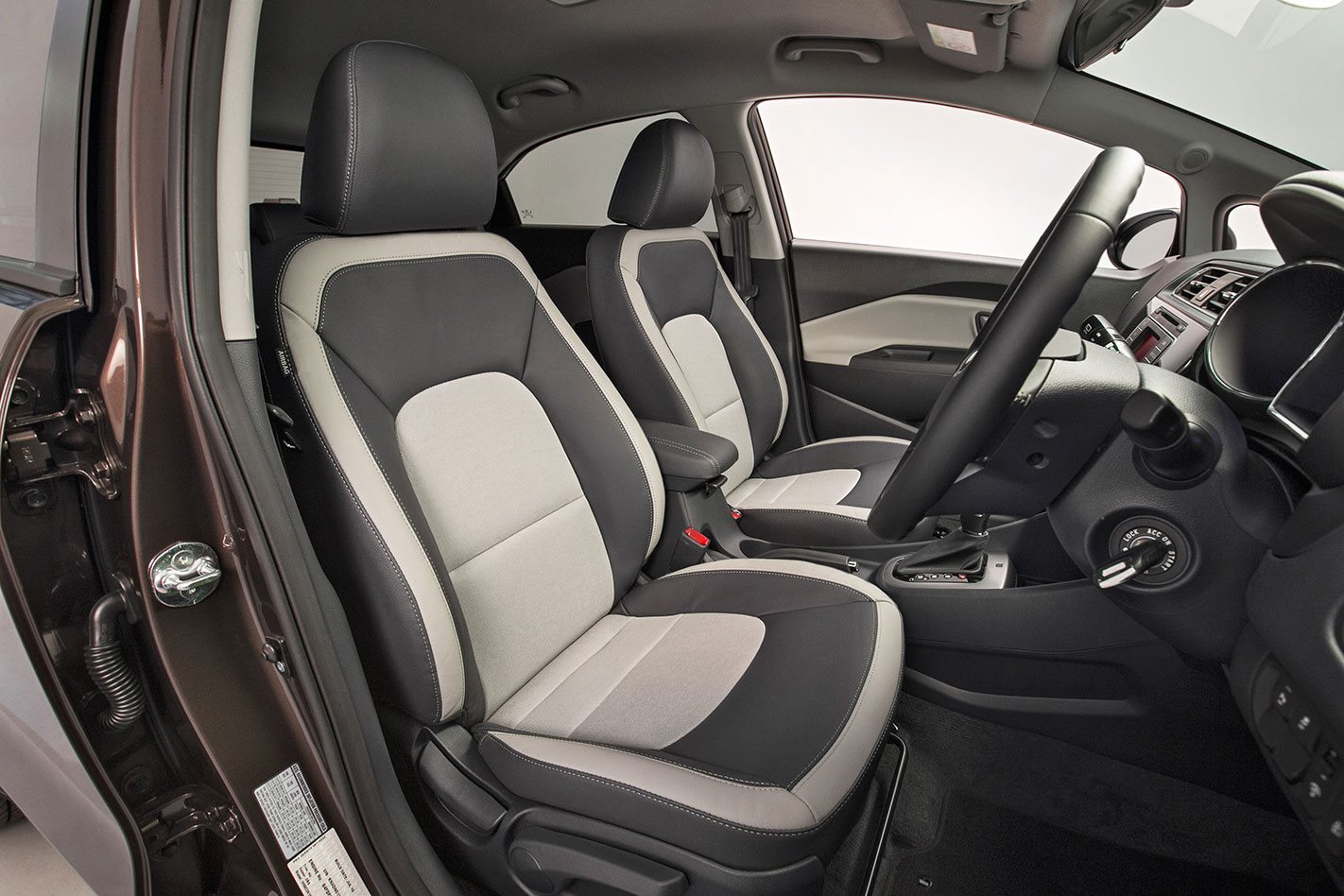 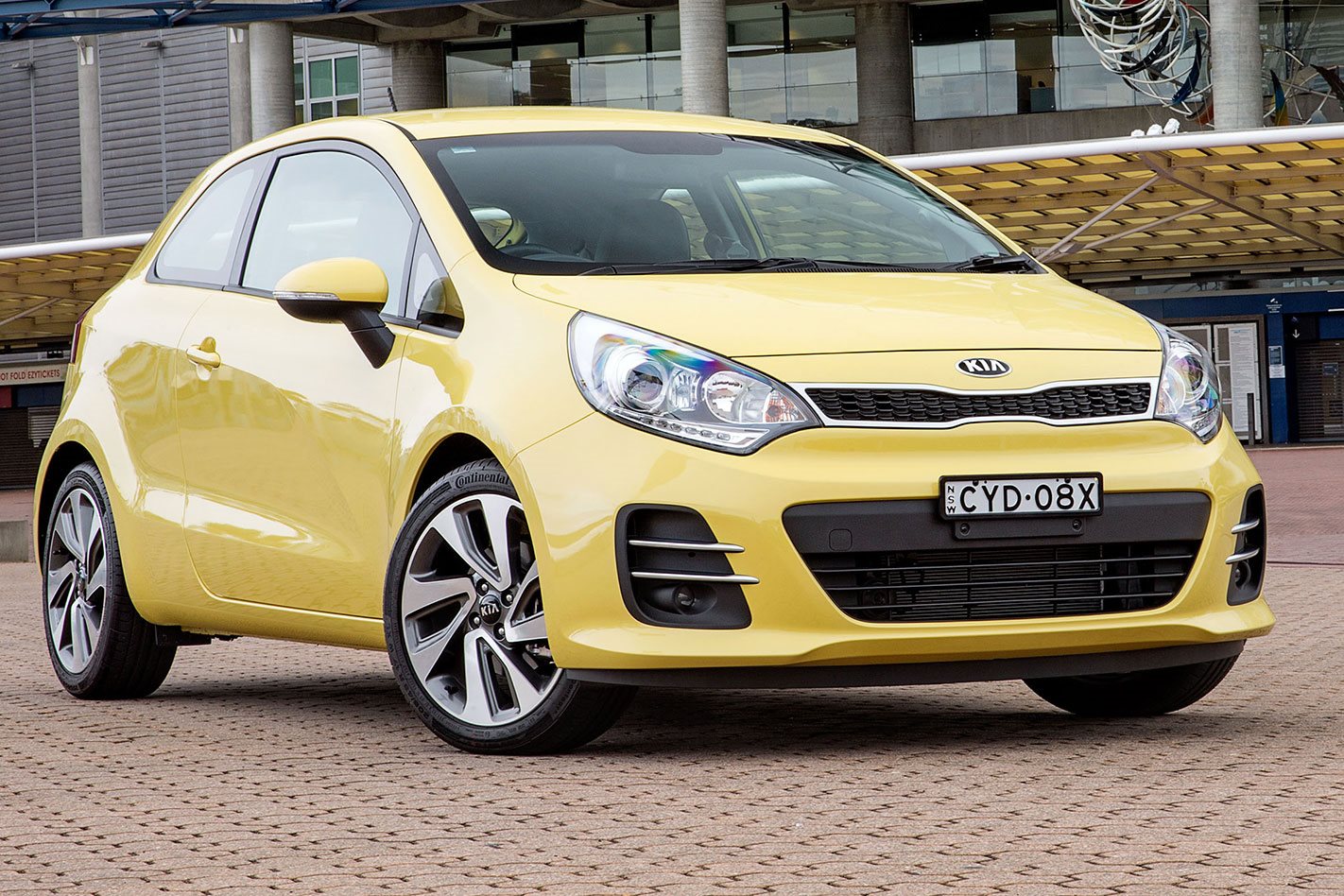 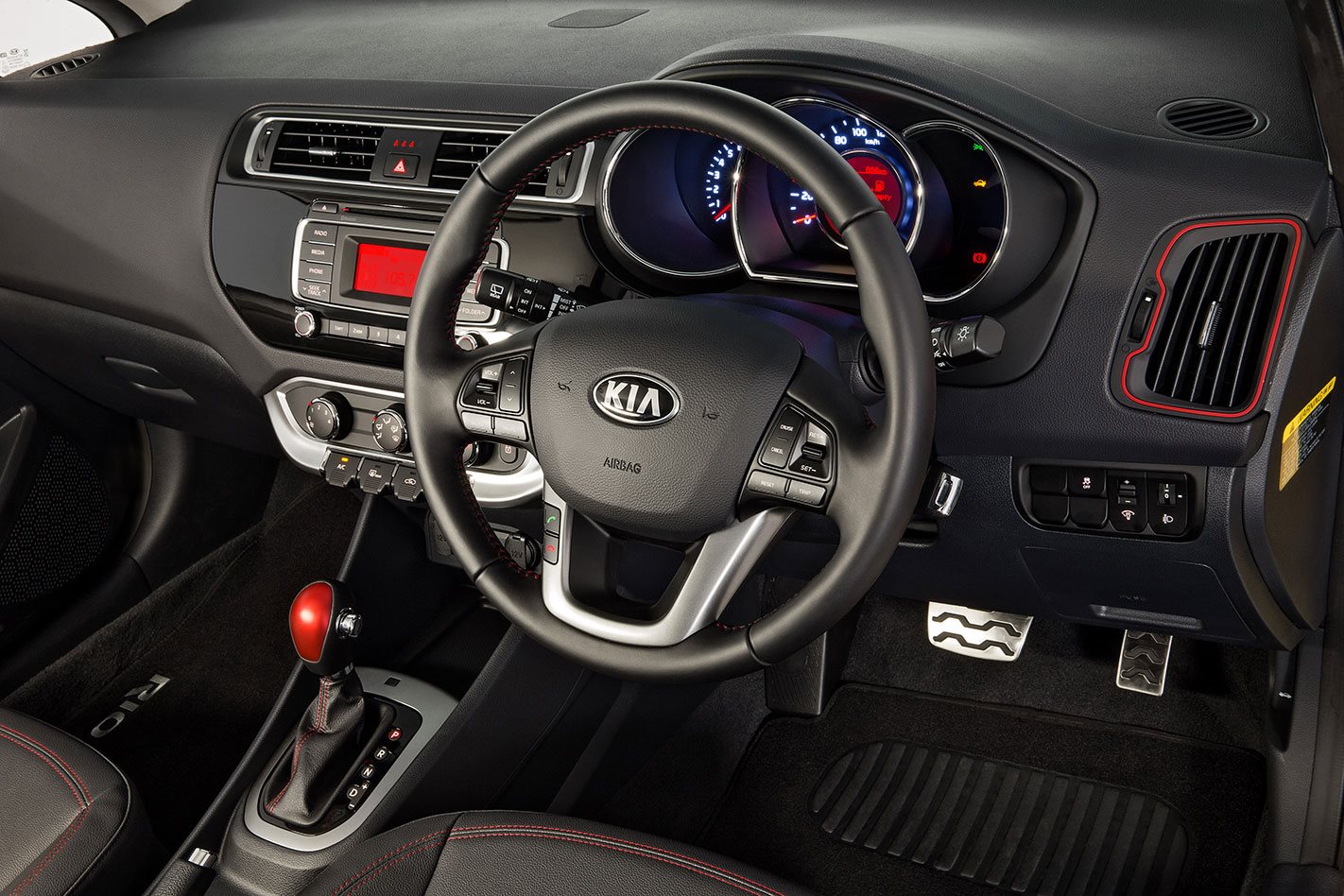 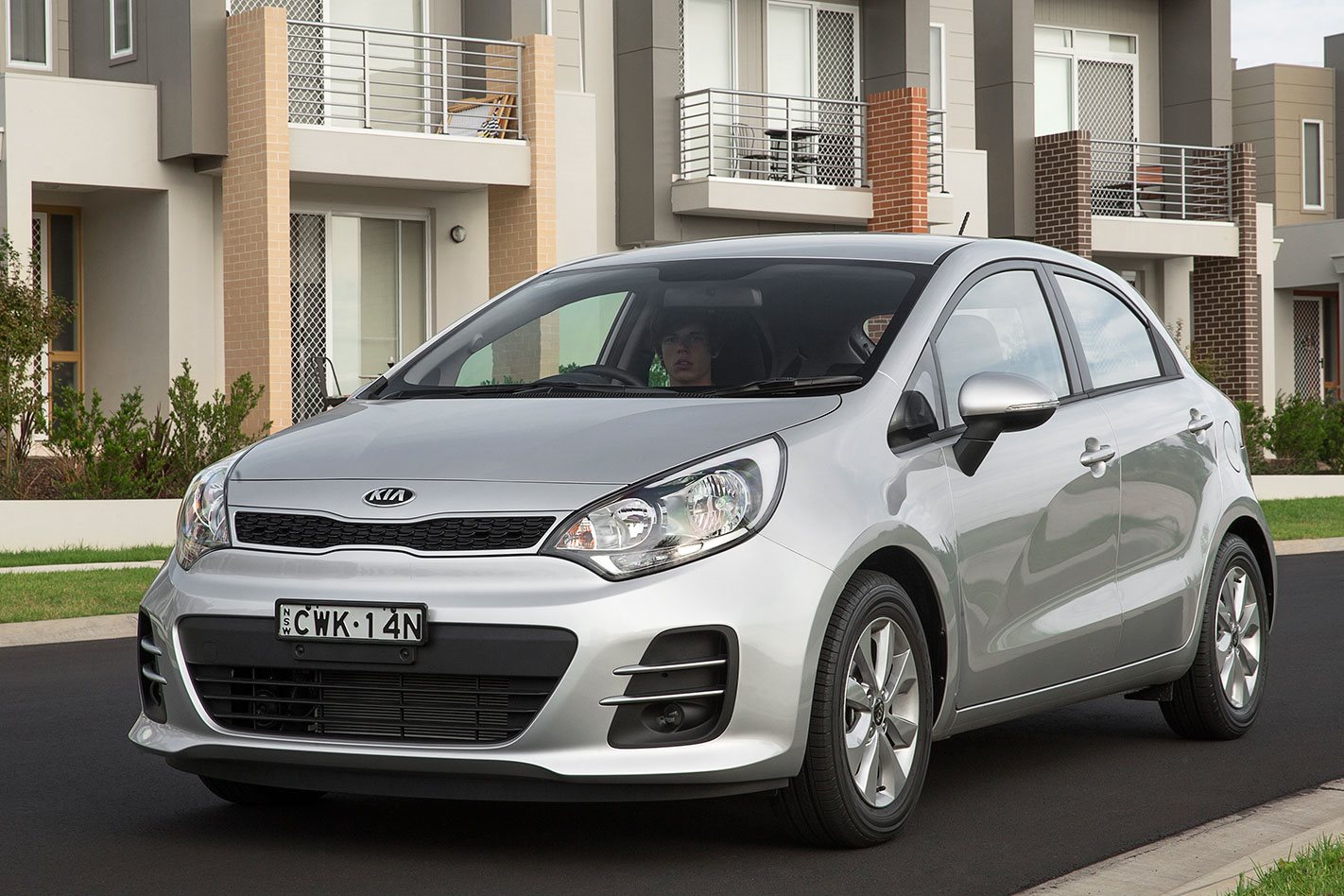 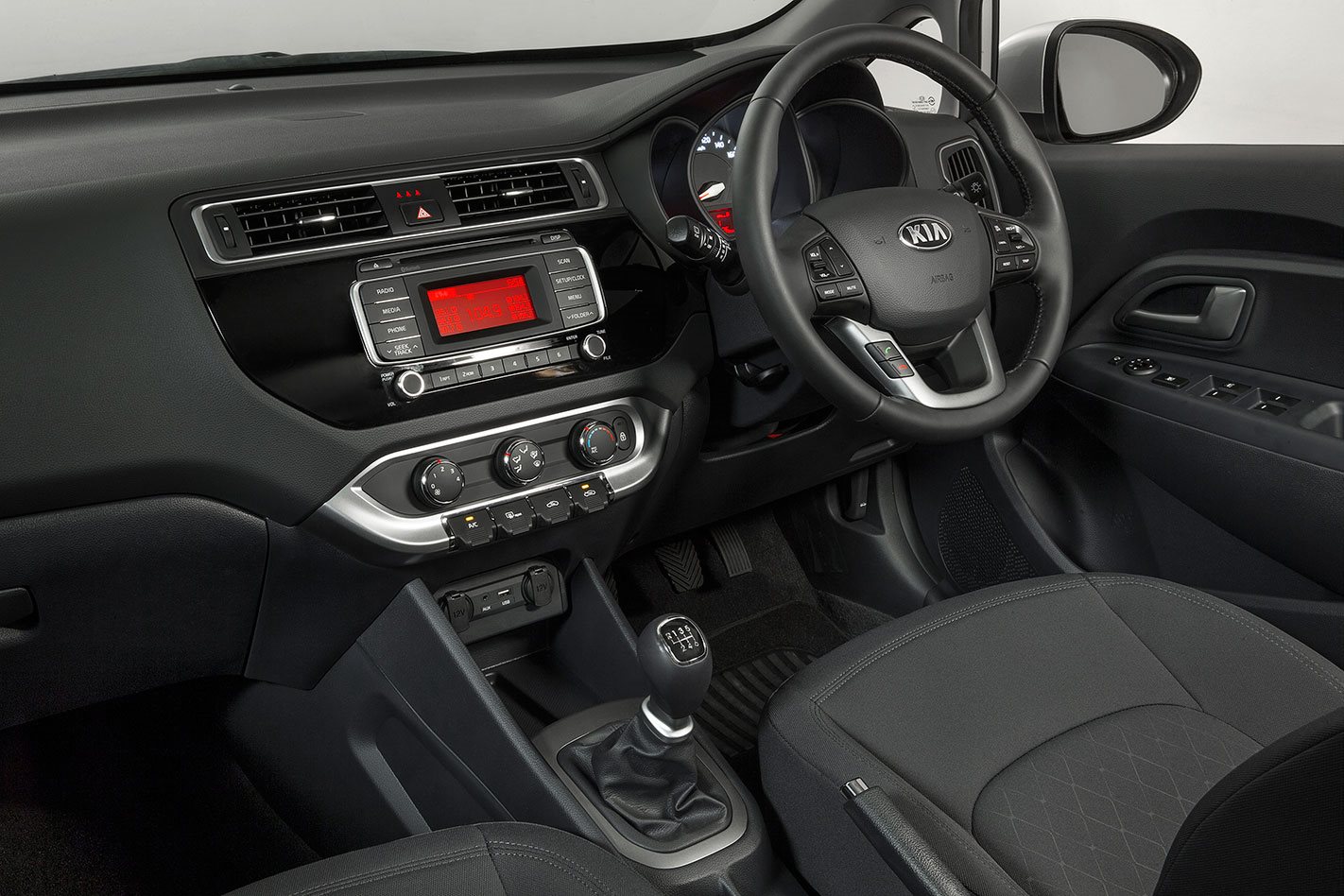