After a flotilla of sports and prestige cars, Inwood joins the mainstream.

Oh, how the mighty have fallen. I’m sitting in my driveway at the wheel of my new long term Mazda 2, grappling with what can only be called a reality check.

Since joining Wheels two and a half years ago, I’ve enjoyed a golden run of long termers. Even as the office junior I managed to wangle a Toyota 86, then a Range Rover Evoque, and most recently a Volkswagen Golf GTI Performance.

Lofty heights, you’ll agree, so the news that my next long termer would be a Mazda 2 – a budget city car – was difficult to swallow.

Granted, this makes me sound like a massive snob. I shouldn’t have worried; this Mazda 2 is seriously impressive.

The model I have here is the range-topping Genki, which, thanks to $200 of premium paint costs $20,190. That’s a five grand hike over the base $14,990 Neo, but there’s plenty of bling for your buck, like 16-inch alloys, automatic wipers, an enormous and intuitive 7.0-inch infotainment display, cruise control, Bluetooth, sat-nav and the same head-up display system as an up-spec Mazda 3. 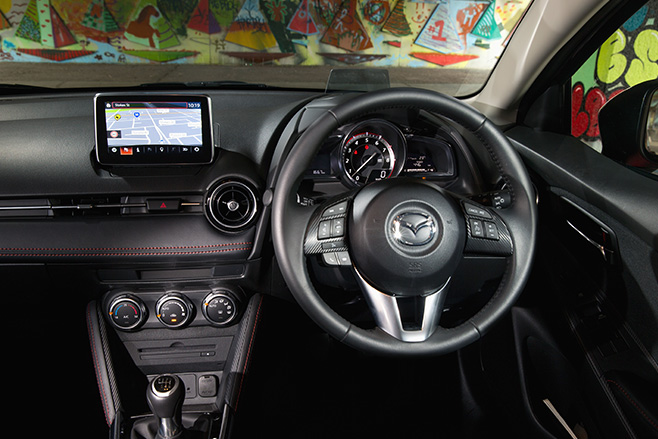 It also has one of the best small-car interiors around. It might be a ‘light car’, but the Genki’s carefully executed interior is wonderfully premium. The dash design is a masterstroke, as are the digital/analogue instruments and leather multi-function steering wheel. Even the Audi-esque circular air-con vents scream class.

The exterior design is a highlight, too. The old 2 was a soft, feminine thing to look at, but this new car, infused with Mazda’s Kodo design language and a new, angular front, is suitably handsome.

Where the 2’s magic really lies, though, is under the bonnet. After six months in the king of all Golf GTIs, I feared the 2’s engine would feel gutless. Again, I was wrong. 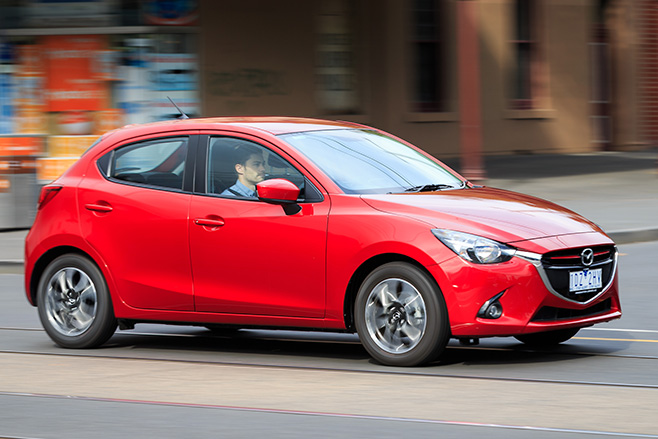 True, given its modest 81kW and 141Nm outputs, the Genki is no powerhouse, but select the right gear and it never feels underpowered, even on hilly roads. And swapping cogs in the 2’s crisp six-speed manual ’box is no hardship. In fact, the beautifully oiled, mechanical-feeling gearshift is so sweet I’ve found myself changing ratios unnecessarily, purely for fun.

The one glaring chink in the Genki’s armour is the lack of a reversing camera, which is a $420 option. This oversight is a shame, not only because competitors such as Honda’s base $14,990 Jazz include one as standard, but because the 2’s narrow, sweeping glasshouse and thick C-pillar mean you really need one. Reversing out of angle parks is a rather tricky experience. 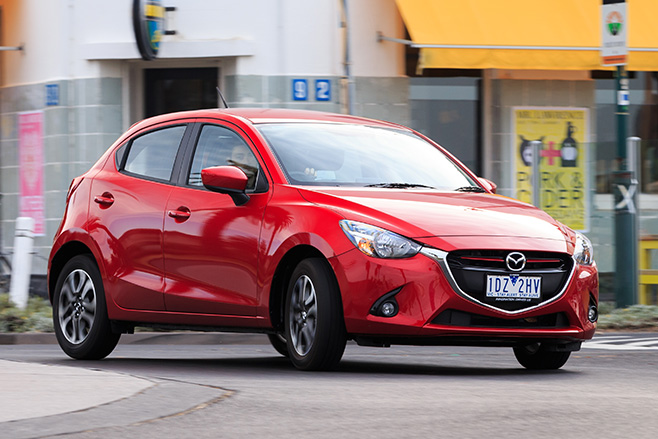 Still, I can honestly say that, so far, I’m rapt in the little Mazda. It’s so convincing that if I’d just dropped $20K of my own hard-earned on it, I wouldn’t be disappointed. It not only boasts remarkable value and an involving, economical drivetrain, but thanks to its stylish new look and superb interior, it has character and personality, too.

The top-spec Genki we have here might bristle with high-tech toys and a stunning interior, but Mazda says the most popular variant will be the base $14,990 Neo, which will account for a whopping 60 percent of sales. Mid-spec Maxx and Genki models will each draw 20 percent of buyers. Neo models make do with a lower-output 79kW/139Nm 1.5-litre atmo four, roll on 15-inch steel wheels and, thanks to a plastic steering wheel and different instrument layout, lack the Genki’s interior sparkle.

New Mazda 2 is larger than its predecessor everywhere except width. Overall length has grown 160mm, it’s 20mm taller and the wheelbase is 80mm longer. Its wheels now sit closer to the car’s corners, and while the new 2 isn’t necessarily roomier, it’s a lot more comfortable. Front seats, which come from the Mazda 3, are wide yet supportive, as is the rear bench. 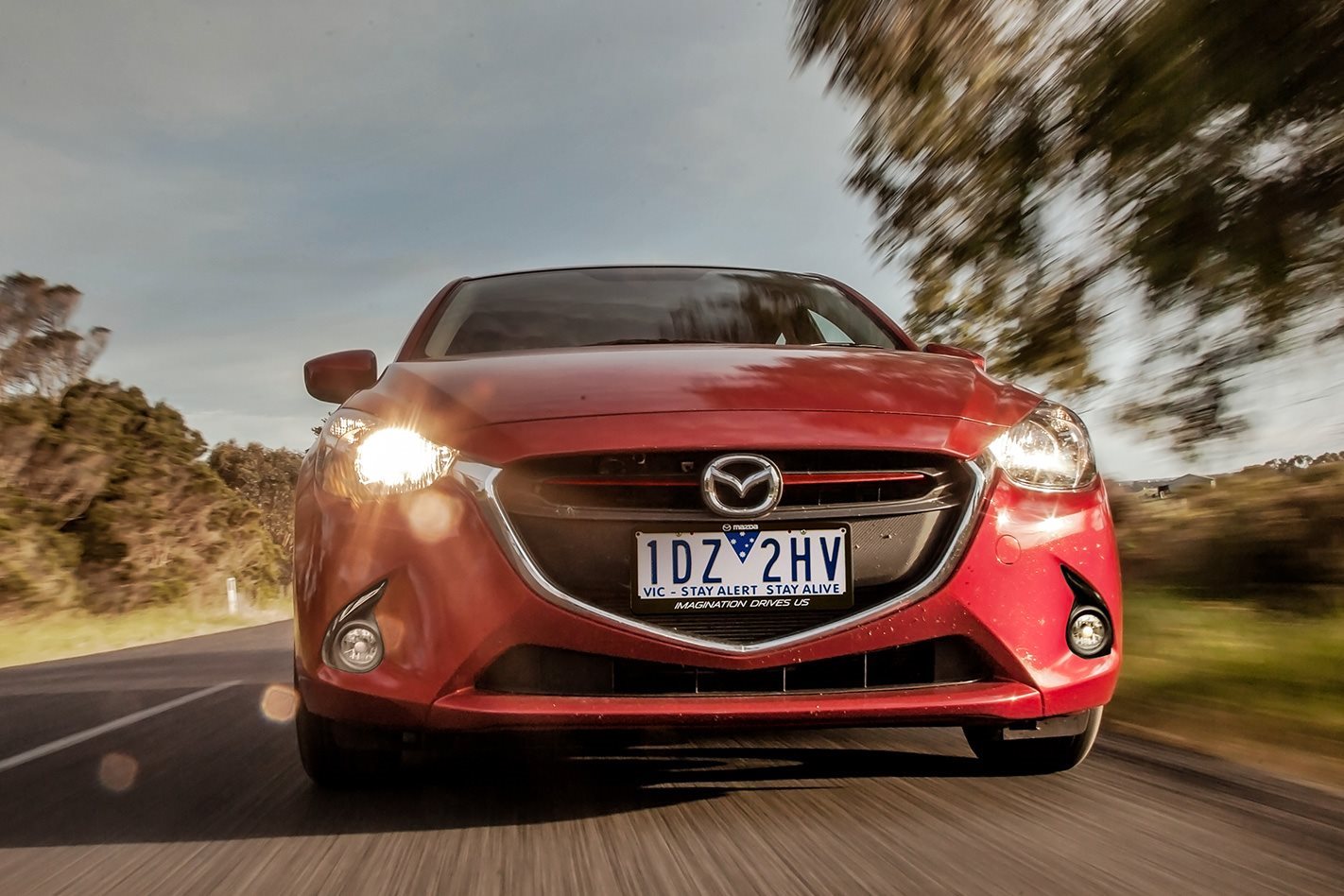 Alex (and his car) sound off about getting hitched.

It's taken seven tortuous hours, a screeching bird, a huge dress and the blare of a truck’s horn to do it, but I finally say the words that have been haunting me for months: “Getting married sucks!”

The words ricochet around the Mazda 2’s cabin like a bouncy ball, but mercifully don’t wake my beautiful wife-to-be, who’s doing her best impersonation of a sleeping zombie in the passenger seat.

We’re en route from Melbourne to Sydney to get hitched, an overnight road trip that’s been 18 months in the planning, and one I now realise is a mistake. The road trip part, not the married bit.

It’s 10pm, I’m tired after a full day at work and the little 2 is so crammed with wedding paraphernalia it feels like a coffin. Even worse, as good as the 2 has been in suburbia, it’s less convincing on the freeway.

This is the second intestate dash we’ve tackled in the 2 (oh, the joys of planning a Sydney wedding from Melbourne) and both trips have been plagued by road and wind noise, a bugbear of Mazdas for many years. The roar is so pronounced I actually pulled over on our first trip to ensure the boot and rear doors were closed. Sadly, they were. 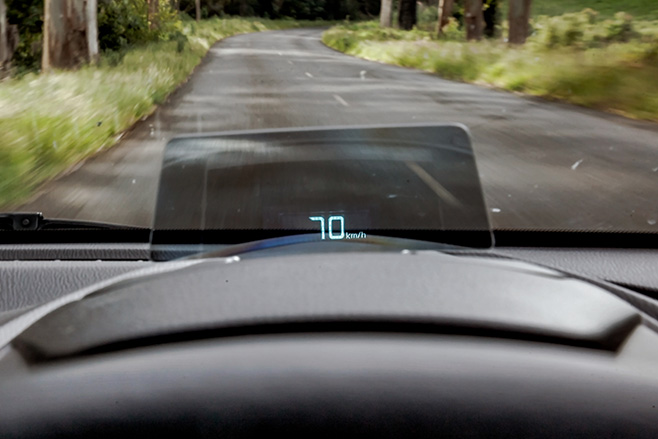 But while your ears take a pummelling, I can’t fault the 2 for interior comfort. The cloth seats are supportive and well made, the driving position excellent, the air-con freezing and faultless, and I absolutely love the head-up display, which still feels like a novelty in a $20K city car. It means that, while its below-par NVH can be tiring, even tall blokes like me can clamber out after a 10-hour stint without a sore back or stiff legs.

Then there’s how much crap the 2 can swallow. Its 250-litre boot capacity is hardly class-leading, but with both the rear seats folded flat I’ve managed to squeeze into the cabin two suitcases, all our wedding equipment and a wedding dress so large it has several moons. There’s even room in the back for a small birdcage occupied by a screeching cockatiel named Alfie, which my future wife is ferrying to its new home in Sydney. Bless her.

Another blessing is the 2’s frugal economy, with its amazing 1.5-litre donk sipping just 5.5L/100km up the Hume. On the freeway the atmo four cruises quietly and effortlessly, and is so flexible you just leave it in sixth. Only the hills around Yass require some quick downshifts back to fourth.

Lots of positives, then, but the 2’s lack of refinement at highway speeds is hard to ignore. It’s a shame, not only because the rest of the package is so convincing but because, after 10 hours of slogging on the freeway, it’s enough to drive you spare. 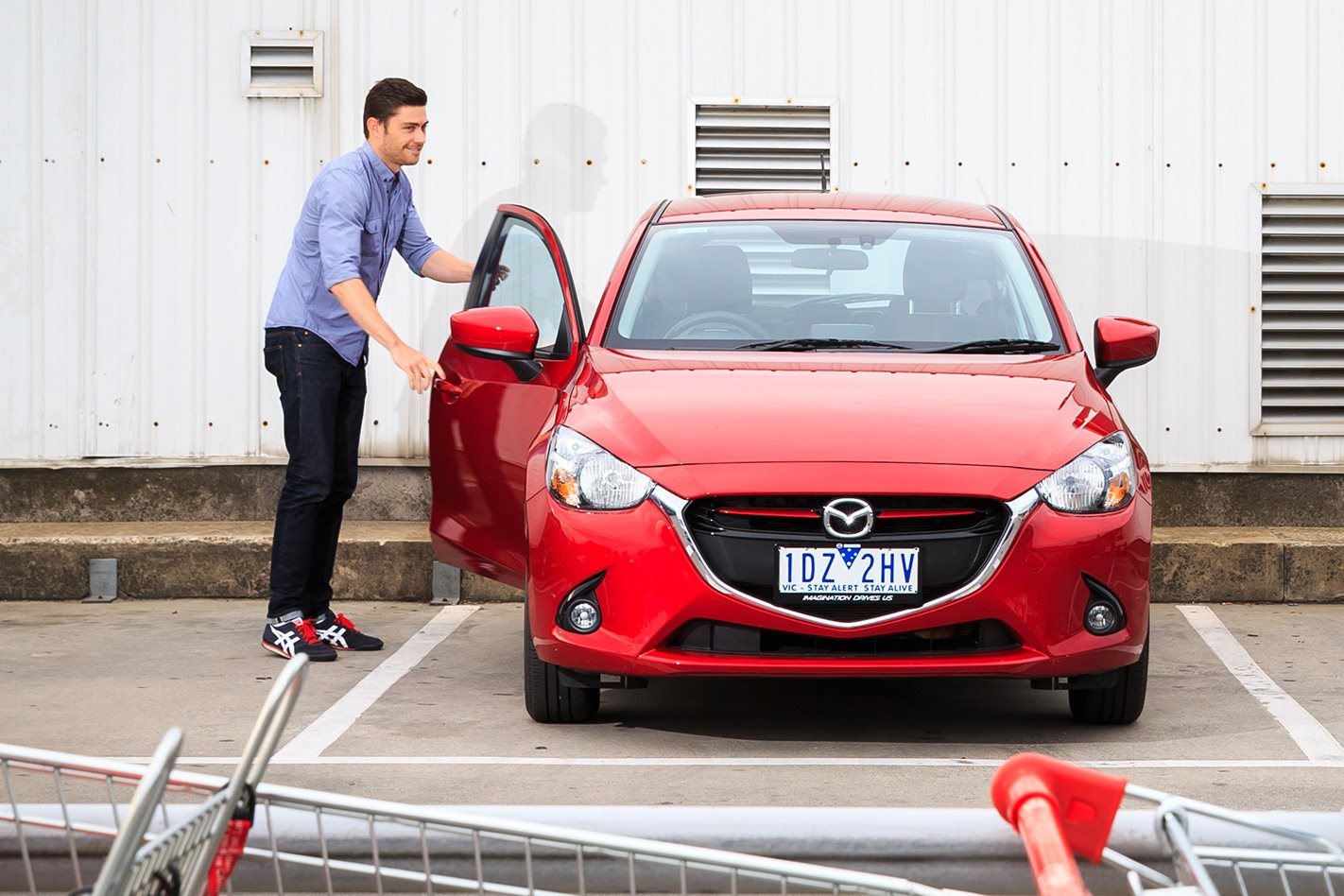 If I'd known it was going to consume so much brain power, I’d have quashed the thought as soon as it entered my mind.

But I didn’t. And now I’m bitter, twisted and confused, all over six seemingly innocent words: “Should I buy a new car?”

The question arrived as I was washing my beloved Mk5 Golf GTI, prompted by a terrible realisation – I couldn’t remember the last time I took my personal hot hatch for a proper drive. Between supplied test cars and long-termers, the Golf had faded into obscurity, forcing me to consider a hard truth: I should sell it. 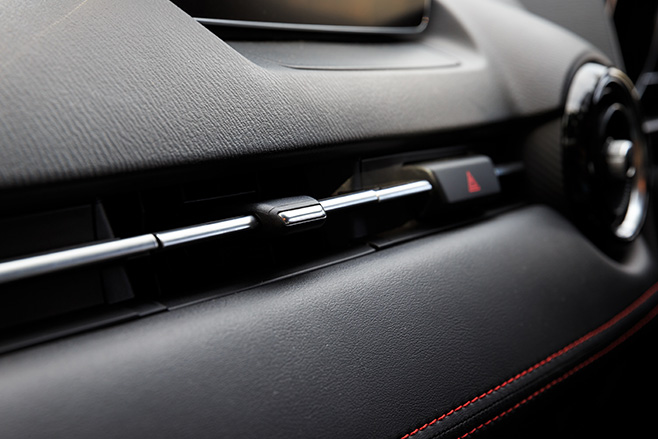 But what to buy? I decided it should be something old, interesting and oozing with character, like an original Mk1 Golf GTI, an Alfa Spider or a VW Kombi, but then my wife muddied the waters even further by suggesting the Mazda 2.

Our red Genki goes back to Mazda next week, meaning that after three months it’s time to level the only question that matters at the end of a long-term test: Would I buy it? The answer, which mercifully could put an end to my night-time detective work, is a full-bodied and resounding ‘Yes!’.

It would have to be a Genki – I love my long-termer’s premium interior and sharper-looking alloys too much to slum it in a Maxx or base Neo – and I’d definitely option the $420 reversing camera and the six-speed manual ’box, but Mazda’s SkyActiv city car has won me over. 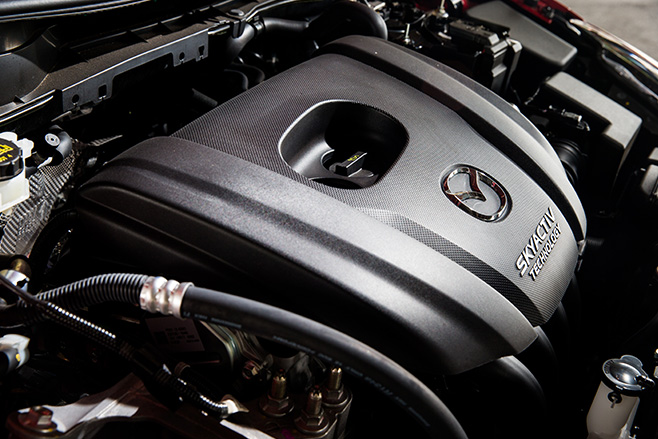 Key to this bond has been the 2’s 1.5-litre engine, which has not only been efficient (my three-month average of 5.8L/100km, mostly in city traffic, is impressively close to Mazda’s 5.2 claim) but oozes personality. Yes, its incredible tractability means it’s happy to slip effortlessly through city traffic with minimal gearchanges, but throw the 2 some revs and the drivetrain can also be engaging. The little unit pulls hard and cleanly while emitting an endearing whine that, high in the rev range, makes it sound supercharged. It’s a drivetrain that, like the 2’s polished interior, gives it a sense of solidity and, unlike some of its rivals, means it never feels like a car built to a price.

Even the cabin has character, with bright red stripes on the seats and a head-up display system that, thanks to sharp moulded triangles on the dash, makes the 2’s instrument cluster feel like a fighter jet’s.

The one stumbling block is the 2’s image. Almost everyone in my social circle has said, “but isn’t that a girl’s car?” Admittedly this is a criticism I myself applied to the previous Mazda 2, and technically my mates are right; Mazda says 76 percent of 2 buyers will be female. But surely no one could label my Genki’s pumped-up, muscular styling and angular grille as feminine? Imagine how good it would look in bitch black, or stark white, with a slightly lower ride height and some BBS wheels. 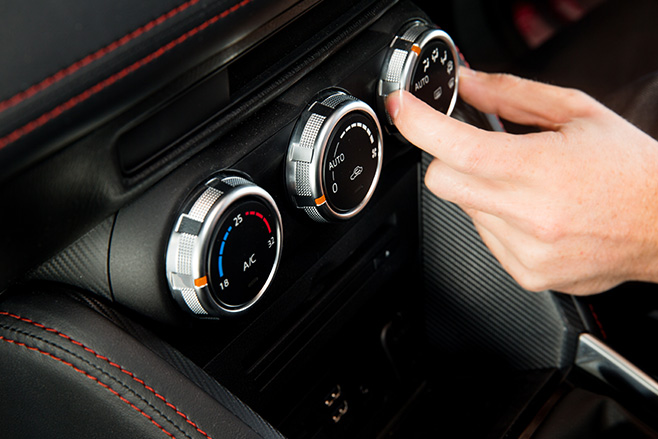 After three months together, I’ve bonded with the little car from Hiroshima. Girl’s car or not, it’s a city car I’d buy in a heartbeat.

At the start of every fill, the 2’s fuel tank feels like a never-ending packet of Tim Tams. For the first 200km, the fuel gauge resolutely reads full, making the driver think the entire tank will last… forever. Of course, this is a cruel trick. Each quarter of the tank is split into three bars and once that first one drops, the rest of the bars disappear quickly. The furthest I travelled on a tank was 644km on the freeway, meaning each of the remaining bars lasted just 40km.