WHEN THE Mercedes-AMG A45 touched down in 2013 it promised serious speed – but at a serious price. $75K? For a hatchback? That’s more than most HSVs! (Some might say, anyway.)

But there was a small catch: no HSV would keep up with a well-driven A45. Even a poorly-driven A45, thanks to its foolproof and then-gamechanging-for-the-price launch control system that meant any numbskull was to be taken very seriously at the lights. A 2.0-litre turbo-four with a better specific power output than a 911 Turbo didn’t hurt, either.

But for whatever reason, this Goliath-toppling budget brawler has never taken on our Bang For Your Bucks. Yep, 2016 is its first outing. In updated form, packing an extra 15kW (now 280kW) and 25Nm (now 475Nm) and only a few grand extra, the A45 came, saw and wiped the floor of the most competitive $50K-$100K class we’ve ever had. 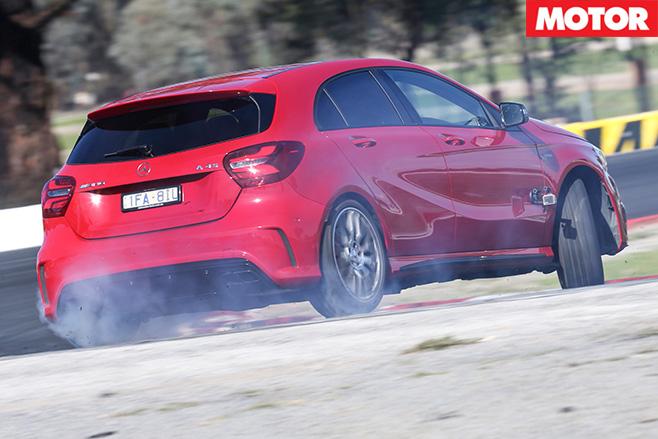 Owing to that mercilessly-effective launch control and Haldex all-wheel drive system, the A45 was Bang 2016’s drag racing star. It pipped its direct rival the Audi RS3 to 100km/h in 4.16sec, quickest of the entire event. To 400m, it left cars like the 400kW XR8 Sprint dazed and confused as it laid down the law – a 12.37sec quarter at 181.65km/h. Fastest of the event.

And it was its impressive stopping power and punch off apexes that saved the A45’s laptime bacon. If you looked only at its top end (5th for lap v-max) and mid-corner grip (3rd in the sweeper; 4th in the slower Turn 9) you’d guess the A45 finished up around fourth in class. But in fact it toppled a pair of giants, clawing back a 1:36.7sec to post the second-fastest lap behind only the M2 (by 1.9sec). 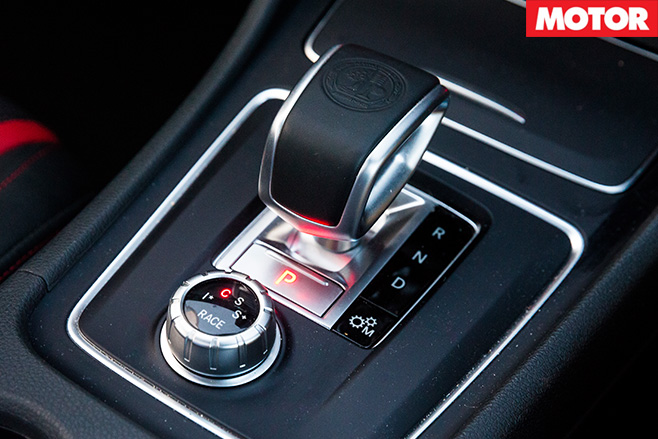 Our test car came fitted with the $1990 Dynamic Plus package, the main attraction being a new limited-slip front diff. Although mere mortals would never complain about traction in an A45, Luffy still found it wanting: “It suffers from a bit of wheelspin on mid-corner to exit on the tighter stuff when in second gear. But when you’re trying to put that much power through the front wheels you’re obviously going to get that.”

That aside, on track the A45 generally gets out there and does the job. If the Nissan GT-R is Godzilla, the Mercedes-AMG A45 is the Terminator, efficiently converting every kilowatt to forward momentum with no small thanks to its slick seven-speed dual-clutch ’box.

With a keen front end it’ll lock on to apexes as if laser-guided, washing into predictable understeer if you get greedy. The rear end will even unhinge, but only if aggressively, properly poked. The serious-face A45 is fundamentally more interested in lap times than fooling around. And a little corner-exit tail-wag on the throttle alone? Unfortunately not, the A45’s all-wheel drive system far from rear-biased. 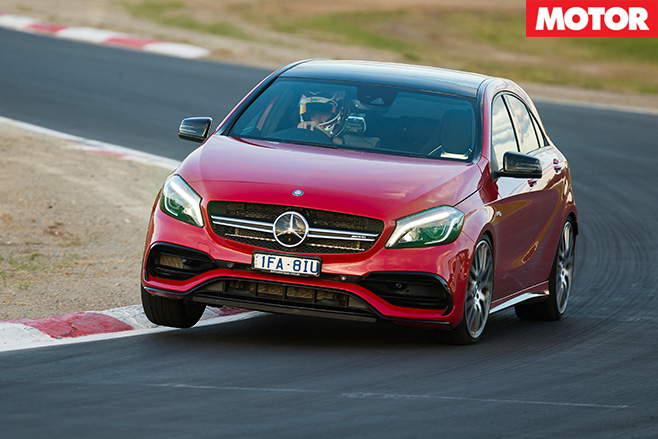 You’d never fit semi-slicks to this car for fear of never being able to go back to normal road tyres – the A45 feels like its outgrown its 235-wide stock rubber.

For all its giant-slaying speed in a straight line and around the track, perhaps it’s more incredible to consider that, in Australia, the A45 is loaded with standard equipment otherwise optional overseas. Things like metallic paint, climate control, sunroof, keyless entry-and-go, Recaro seats, leather and shift paddles. We can only imagine how a basic, $65K A45 might have done against our bang-for-buck formula.

For now though, even at nigh-on $80K, the A45 is a potent enough weapon to clean up our $50K-$100K class, backing up its bucks with armfuls of bang. It was worth the wait – and long may it reign. 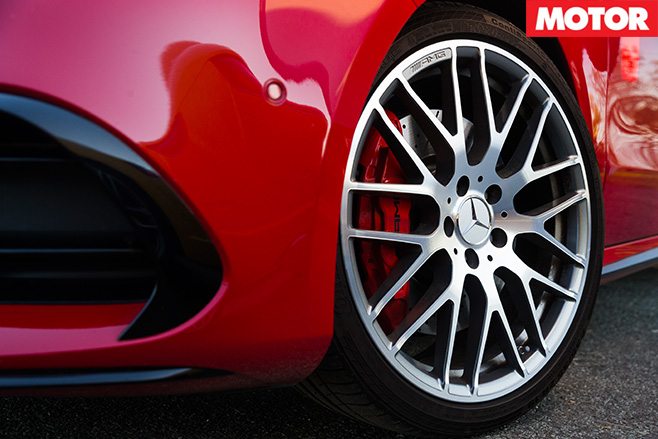 06 Dylan Campbell
“Not much of a sense of humour. But boy, it’s not to be messed with.”

05 Louis Cordony
“Slurps up tarmac fast as Matt Preston does an entrée.”

07 Scott Newman
“Not sure it’s that much actual fun, but man is it effective!” 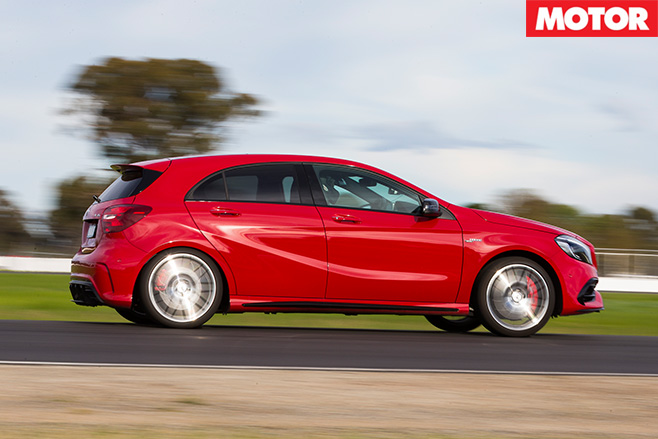 WARREN LUFF SAYS
07. “A real surprise packet out there, I didn’t expect it to beat the RS3”

“I think this circuit suits the A45 more than the RS3, but overall this car is a lot of fun. It moves around; through the sweeper you can start to slide the back a little bit and help point it to the second apex.

“It has a little more of a lively character and on a tighter circuit like this it works. It has really good front end grip, really good brakes, the gearbox does what you want it to.

“Certainly for the speed it’s got, it’s a really good fun car out there. It’s one of those cars you want to keep driving it because you know there’s more to come out of it.” 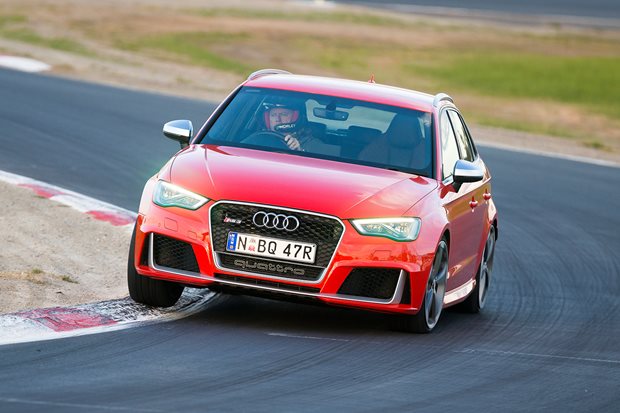 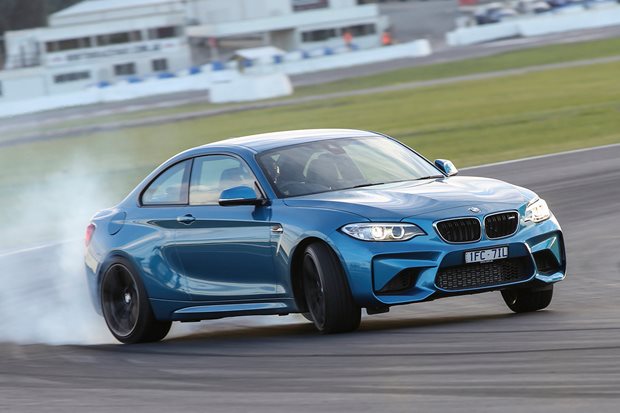 A judges’ favourite, but a formula victim 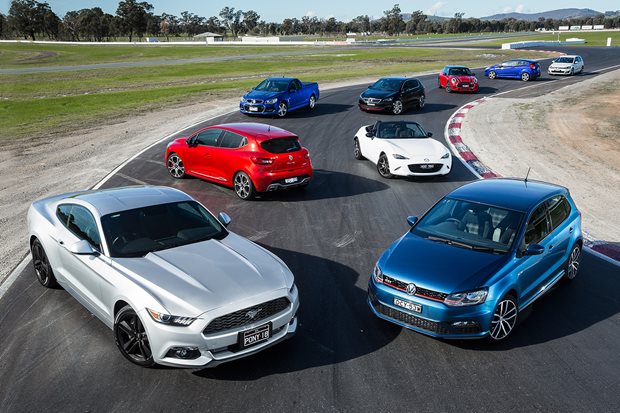 Budget bullets face off for the title of Australia’s best value performance car under $50,000