CHINESE carmakers have embraced the future in their own wild, wacky way in Beijing, rolling out a suite of concept vehicles potentially one day destined for the world’s largest new-car market – right on their doorsteps.

The ideas ranged from flagship limousines to city-smart commuter cars designed for Chinese, and not world, tastes. And as always, there’s always something a little quirky in the mix.

Here’s our pick of the 2018 Beijing Motor Show; the cars we’re likely to never see, the ones we might, and the ones that shouldn't have been there at all. We’re a long way from the excesses of the House of Saud and its predilection for monstered off-roaders capable of barrelling up the nearest sandhill in airconditioned comfort, so it’s a bit unusual to spot a six-wheeled off-road monster on Beijing’s show floor. Looking something like – okay, so almost exactly like – a knock-off of a Merc-AMG G-Class special, the BJ80 6x6 is a dual-cab ute-backed version of the BJ80, itself an extremely thinly veiled Merc G-Wagen clone hung in cheap Chinese clothing.

Beijing Auto bought the rights to build the Saab 2.0-litre and 2.3-litre turbo engines off GM following the Swedish brand’s painfully drawn-out collapse. This monster is believed to use the bigger 190kW-odd donk, mounted transversely and sending its economical dollop of performance to all six wheels. 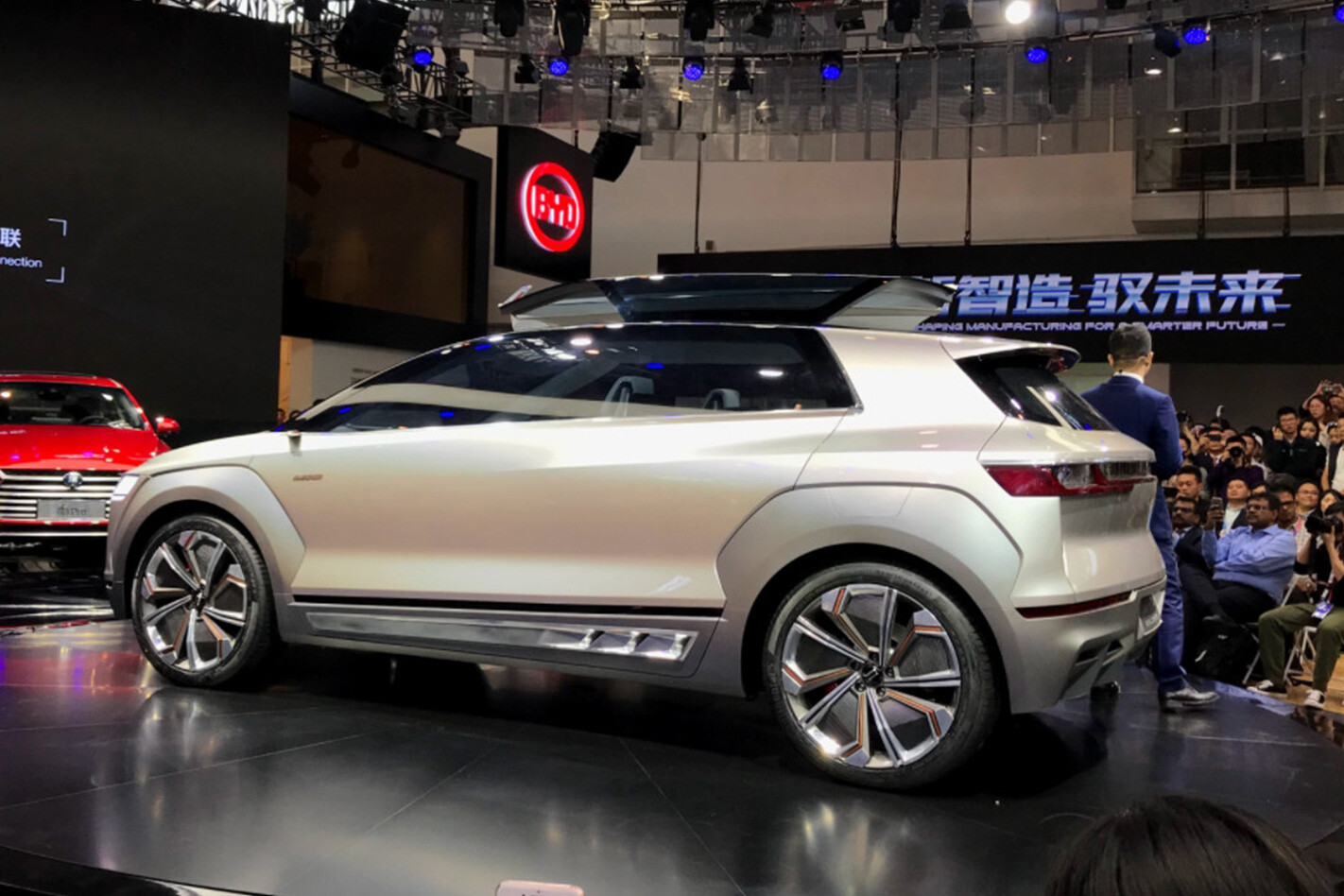 If you’ve never heard of BYD, you should have; it happens to be the world’s largest maker of electric vehicles. How it scales its operations will be of interest to carmakers globally, keen to find a low-cost solution to building high-efficiency vehicles. The dragon-faced, “dual-blade” E-Seed concept is built on a new-generation platform and includes what’s called the DiLink “intelligent connected system”. With a range of about 600 kays, it will also hit 100km/h from a standing start in 3.9 seconds.

BYD announced that it would open up its DiLink platform to the world’s developers to work on – a claimed groundbreaking move for the automotive industry. 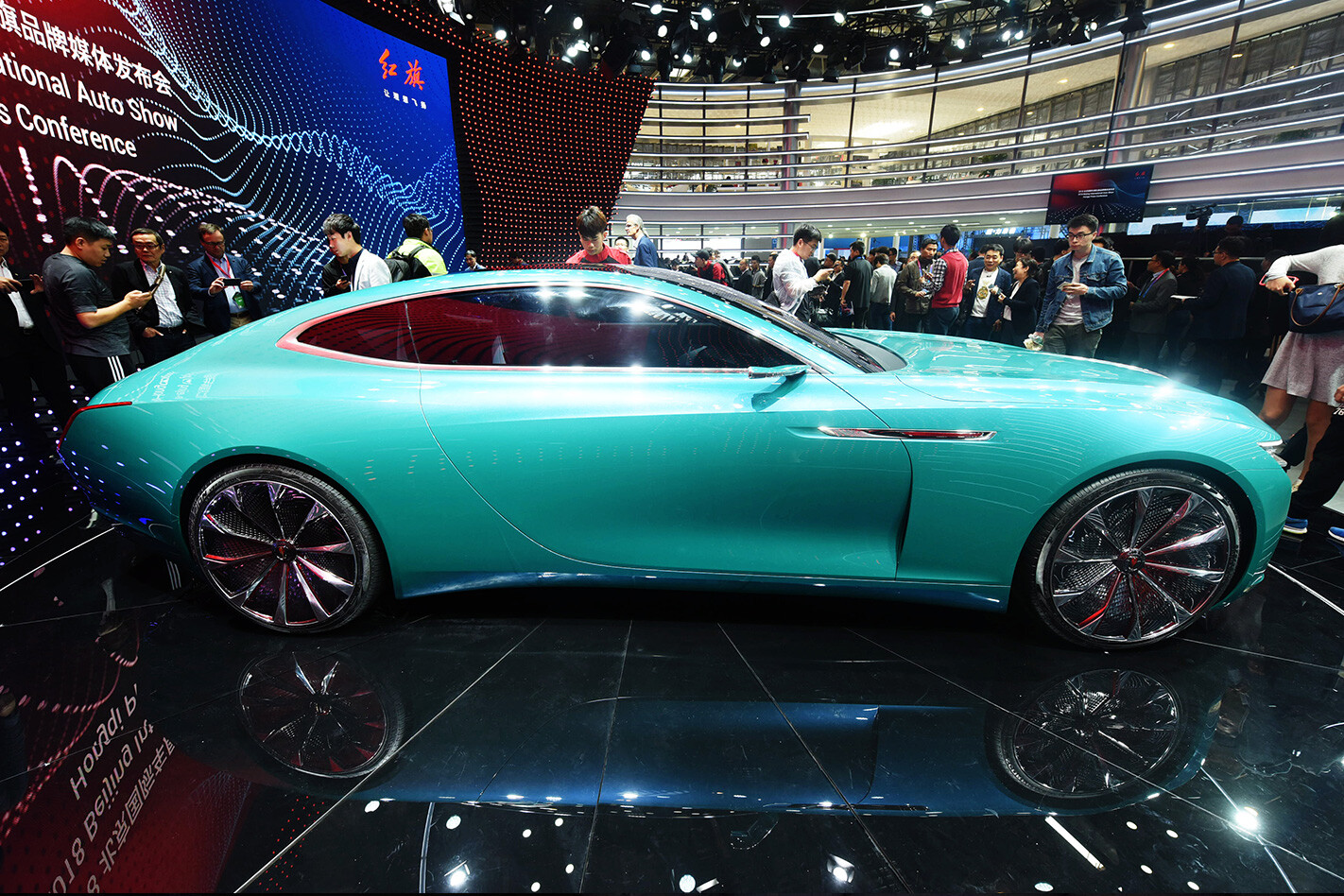 Here we were thinking Lexus was good at rolling out supersized grand tourer concepts with its 2015 LF-FC, and along comes Hongqui with its impressively sized spin on the idea. Hongqui is the same carmaker responsible for building the V12-engined “L5” Red Flag limousines that cart the republic’s high-level officials to their many party room meetings.

No details exist on what powers the E-Jing GT, but the lack of a grille on the slab-nosed Rolls-Royce front (bookended in a sweeping Bentley-esque rear) hints at electric power rather than traditional fossil fuels. We should add the Hongqui bears absolutely no resemblance to the Vision Mercedes-Maybach 6. At all. Everyone wants to be the new Tesla. Nowhere is that more apparent than at Hybrid Kinetic Group. It wants to establish itself as a luxury-focused, range-extended electric car company, and launched the Pininfarina-penned K350 SUV and H500 sedan as its first products. Its party trick? Using a small turbine that can run on any number of fuels as a range extender for the electric motor. Both vehicles, the sedan in particular, are quite pleasing to the eye and look more like production-ready cars than some of the things we’ve seen unveiled in Beijing. We’ll keep an eye on this one. Details are sparse, but there’s a claimed 500km range and down the rear, the tail-lights are shaped like lightning bolts. Lightning bolts! What’s not to like? 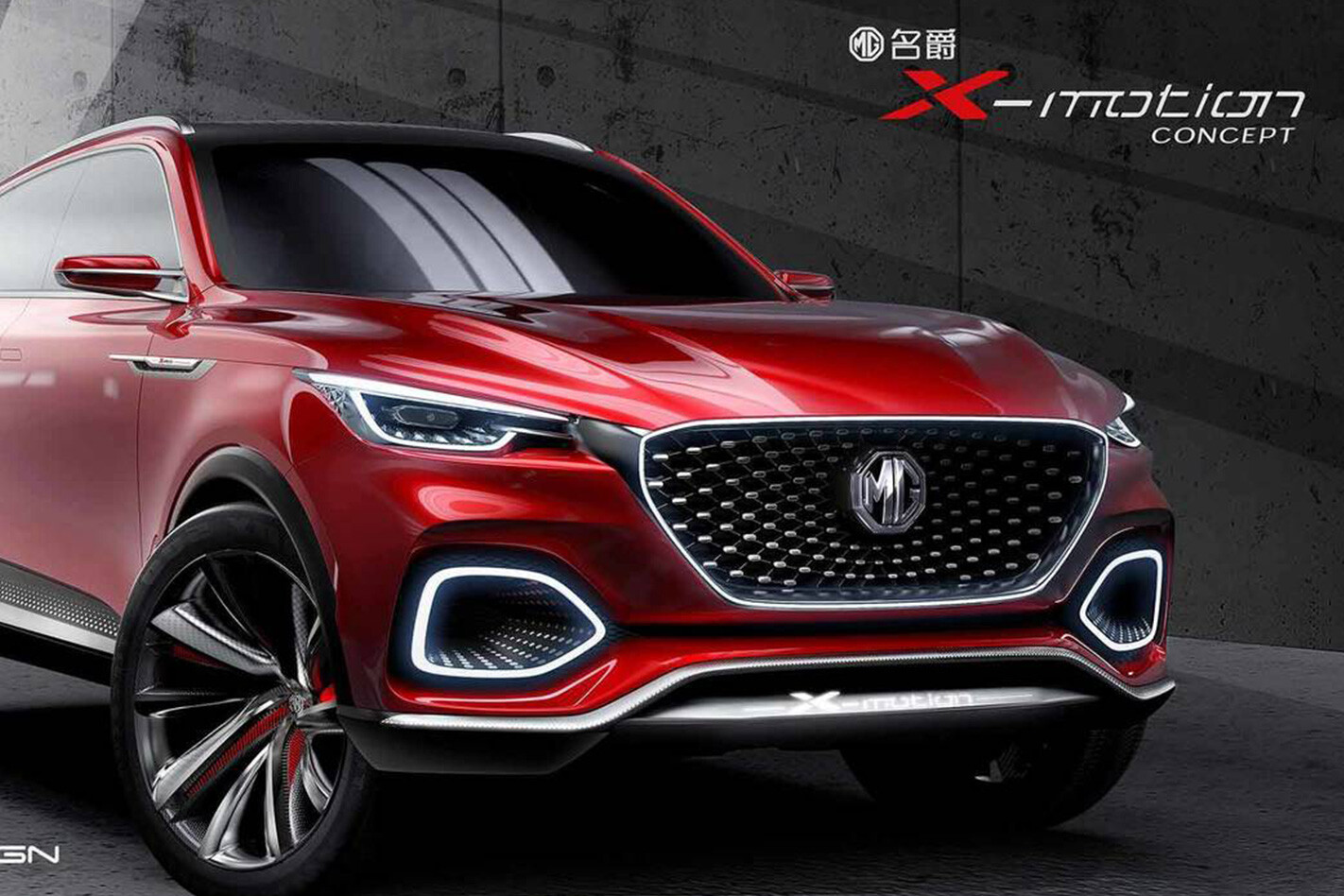 The Chinese-accented British brand has given the world a first taste of its large SUV via a concept car dubbed the X-Motion. The heavily Benz-influenced (come on, you see it too, right?) “range captain” model that will sit above its baby ZS and midsize GS siblings in the hierarchy previews a vehicle that’s expected to go into production sometime in 2019, and featuring what’s likely to be  2.0-litre turbocharged engine.

MG has a habit of launching and proving cars in its domestic market before rolling them out to overseas markets. The brand still has a big design and development presence in UK, so we can guess a right-hook version could one day make its way here. 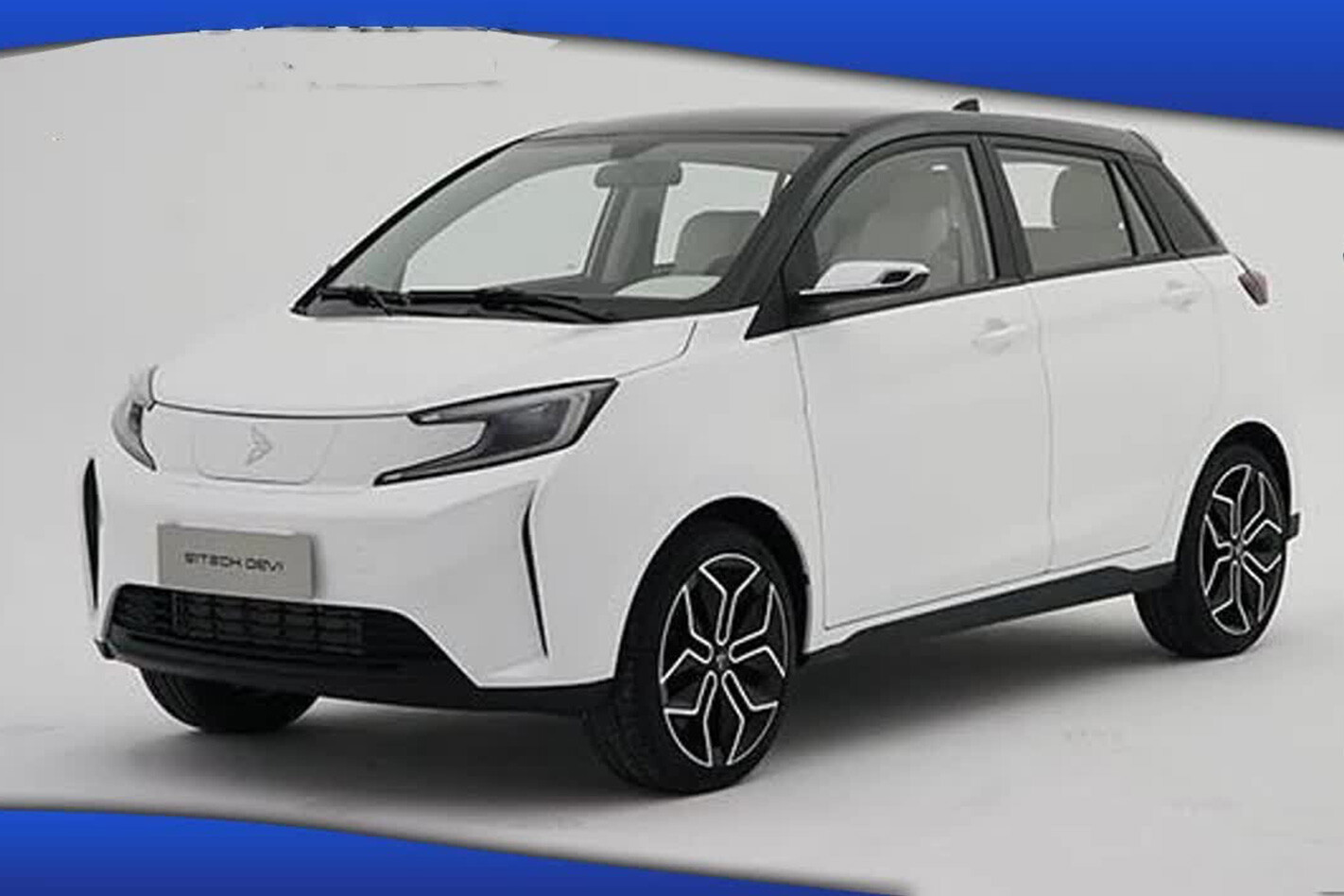 Remember Mitsubishi’s first attempt at an electric car? It took a Japanese market kei car, ripped out the engine and fitted it with a battery and a crude version of what has evolved into the electric drivetrain of today, and called it the iMiEV. The idea was good, the execution not so. Thankfully, FAW’s electric car subsidiary SiTech has had a crack at the idea, and appears to have improved on it.

Looking remarkably like an iMiEV, its 55kW/170Nm DEV1 production car is a low-cost solution for crowded cities. It’ll run for around 150km before needing a powerpoint. 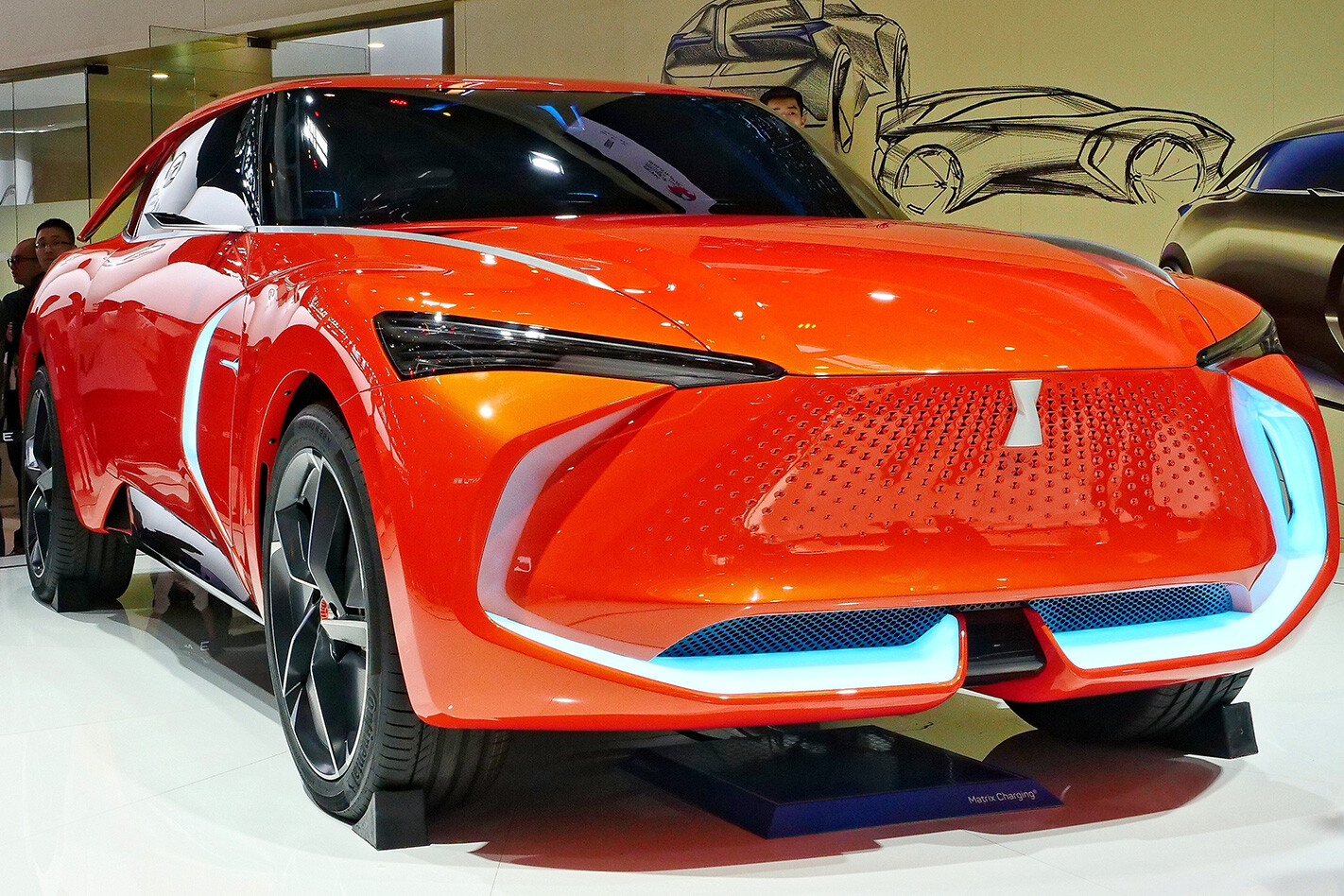 Great Wall Motor subsidiary Wey has revealed the X, an autonomous electric SUV with scissor doors and a tiny, holographic woman who can virtually step in to help you as you drive – or at least give you the blueprint for the Death Star.

Its party trick is being able to recognise your face as you walk up to it, and then set the seat and radio station to the ones you like. It’s a disappointingly ugly sedan on the outside, with proportions that are just all wrong from the map contour grille to the scalloped rear end. But it’s the interior we’re focusing on. Crack a door, and the Borui features a wide 12.3-inch multimedia screen that bleeds into a dash feature that appears to be layers of LED-lit squares. In front of the driver is a full LED instrument cluster, and a fly-by-wire gearshift lever sits above a layered centre console. This concept shows that the Chinese are taking note of what the European manufacturers are fitting to the consoles of their high-end models, and takes it half a step further. It’s one case, though, where things look better on the inside.