Can the flagship Cup Trophy pip its premium competitors to be the next top model?

Feeling naughty? A little indulgent? Maybe a bit adventurous? There’s a blooming branch on the fringes of the motoring tree that’s ripe for the picking.

It’s where compact hot hatches grow, but not of the pragmatic variety where smart sub-$30K money buys your cheap-and-cheerful Ford Fiesta STs and sensible Volkswagen Polo GTIs. Instead, you need the thick end of 40-large to swing on this hyper-hatch limb.

While that might seem like crazy money for a warmed-over small car, there’s a growing market for proper up-spec Euro luxury and properly heady performance in a shoebox-sized package. And if you’re flush enough for an interesting, flamboyant, full-frills-and-thrills toy car, then this trio of pint-sized top-shelfers is here to please.

The old new Mini, for lack of a better description, pretty much set the modern mould for the new school of premium, funky and fast compacts for High Street. And despite its best attempt to hide behind a familiar face, the completely revamped new-gen Mini attempts to raise the stakes in every area. 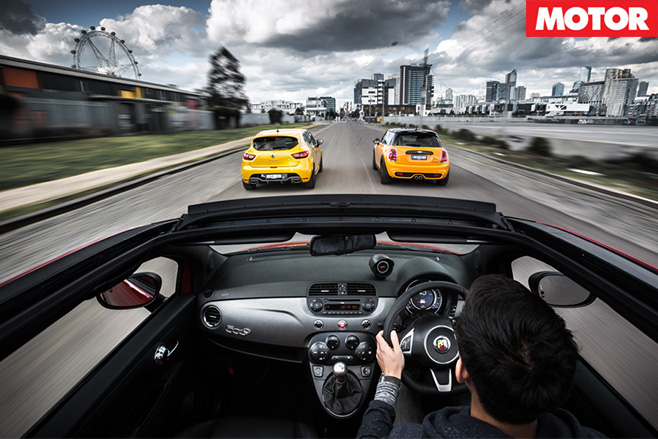 The new Cooper S, at $36,950 in six-cog manual form before options, typifies the new-new Mini direction. It’s grown in almost every dimension and adopts 2.0 litres of turbo-four power in a segment weaned on 1.4s and 1.6s, suggesting its ‘compact’ segment status is fast becoming more illusion than reality.

No such sweeping changes for the so-called “new” Abarth, here in the Enzo’s-on-speed-dial 595 Competizione convertible spec. Like its lesser Fiat 500-badged kin, the 2014 update is essentially a mild makeover of the old 1.4-litre turbo four-powered, dinky-sized device, the 595’s go-faster accoutrements blossoming the bottom line of the top-shelf rag-top to a whopping $39,000 in five-speed manual form (the Dualogic robotised manual adds $2000).

Our Renault Clio RS 200 EDC, in full-fat Cup Trophy form for $36,790, is vastly different to its predecessors, comes only six-speed dual-clutch-equipped and has five doors to its present rivals’ three apiece. 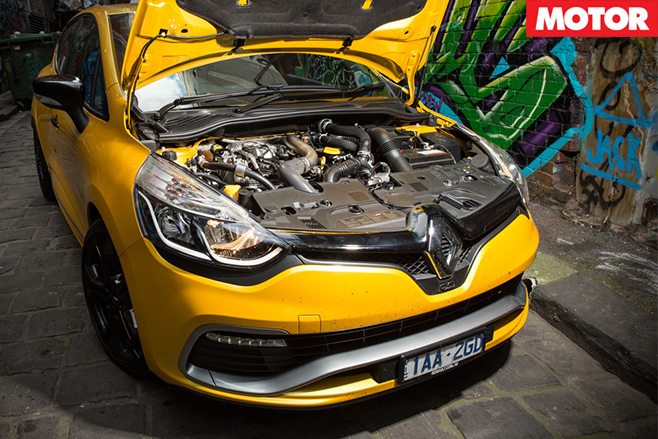 Its turbo-fed 1.6-litre four makes 147kW and 240Nm, obliterating the Abarth T-Jet engine’s modest 118kW and 230Nm, though the Mini offers a healthy 141kW and a class-smashing 280Nm (300Nm on overboost)from its relatively large-capacity four.

Inside, the Mini is clearly a car transformed. You sit lower, the far-set A-pillars add a newfound sense of roominess, and you really notice a lift in premium feel throughout a cabin that’s a little less kitschy and slightly more intuitive than its forebear.

It’s slicker than greased linoleum and the upsizing should please many buyers, though you sense that, somewhere, original Mini architect Sir Alec Issigonis is spinning in his grave. 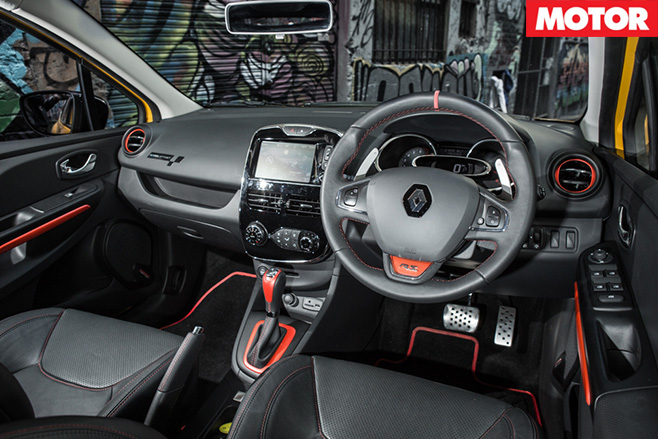 Renault’s lifted Clio’s game inside the cabin, too, though the RS doesn’t quite match the Mini’s depth. That said, while there’s plenty of quirky French flair and ergonomics, richness and quality have improved immensely since the old 172 of the early noughties. The heavily bolstered bucket seats, in black leather, are also top notch.

Then you climb in the Abarth…

The big sweetener for the Competizione’s $3000 premium over the similarly potent Turismo version is the Corsa by Sabelt racing buckets, which look the duck’s gonads but are hard and flat-backed. 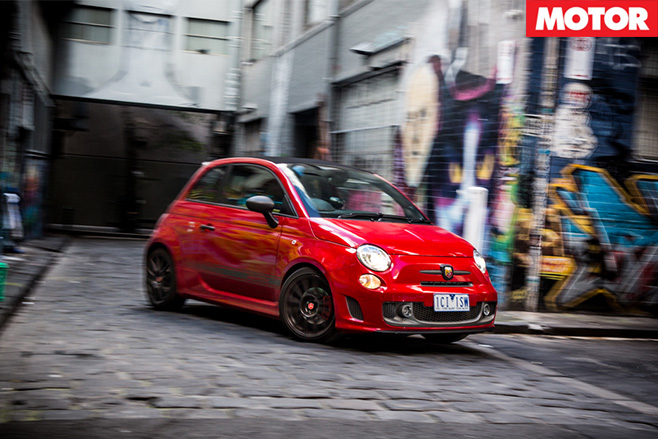 It’s form over function, which pretty much sums up the Abarth cabin, rag-top to toe. Plastics? Cheap. New digital instrumentation? Fussy and illegible at a cruise let alone the heat of the battle.

Seating-wise, you’re higher than a Keith Richards bender and the tiller, seat and pedal relationship seems sized for a small gorilla. The upside is that it permeates a strong sense of lighthearted fun that helps make every sprint to the shop for milk – or, perhaps, bananas – something of an event.

And that certainly seems the point of the Abarth experience. The dual-mode Record Monza exhaust will ring your bell as it howls, the taut Koni-enhanced suspension will scramble your brain and fuse your spine.

You’ll row furiously through the high-set gearstick trying to keep the little turbo four-pot in its useable 2500rpm sweet spot between peak torque (3000rpm) and Game Over (5500rpm). It’s a grin-pinning, though slightly masochistic, feel-good hoot. 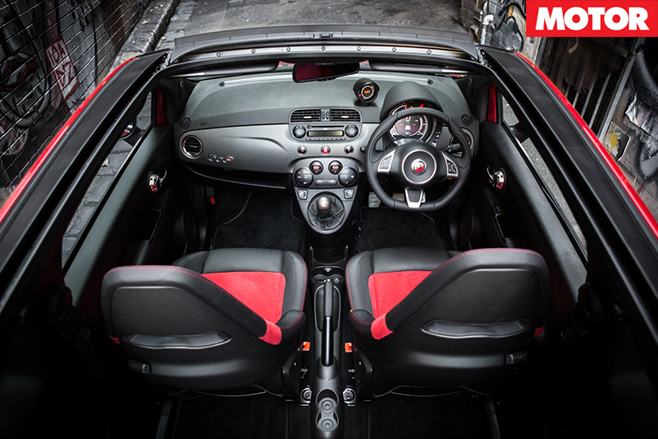 It ought to be because the Abarth isn’t particularly quick, either in this company or outright. Its rev-limited, ESP-encumbered launches yield a tardy 8.6sec 0-100km/h sprint, far shy of a 7.4sec claimed best.

Launch control? Paddle shifts? Drive modes? Synthesised engine notes? The Clio’s no compact hot hatch by traditional thought, nor is its handy 6.7sec 0-100km/h time. Peak torque arrives at just 1750rpm and pulls stridently through to a 6000rpm redline, and while a little recalcitrant at the low-speed stuff, the dual-clutch is a responsive ally on the hunt. It’s a shame, though, Renault don’t offer a conventional manual transmission.

What’s quite convincing is the Clio’s sense of thoroughly modern, finely honed potency. It feels less like a steroid-fed grocery-getter and more like a shrunken performance car. The Mini, at 6.7sec 0-100km/h, is not only equally as quick to march, it feels keener again when let off its chain. 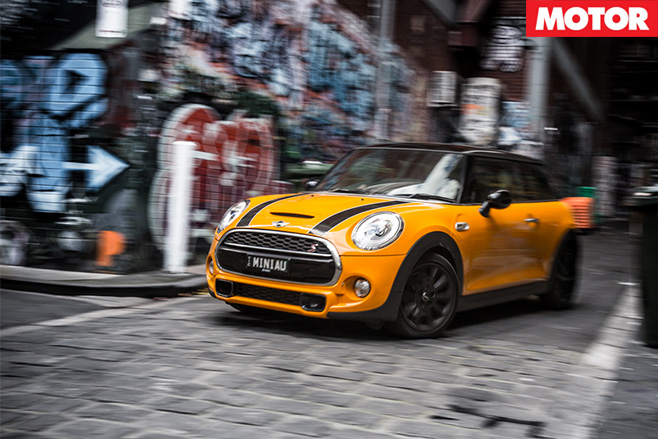 It’s more eager to cut loose into wheelspin in the lower rev range, belting 280Nm through a fat 1250-4750rpm band – overboosting an extra 20Nm when it sees fit – with a tapering-off in the top end. As a point-and-squirt device it’s a real gem, particularly on twisty back roads, where the Mini shines brightest.

At a spirited, twisty back-road clip, the Mini and Abarth couldn’t feel more different. The former has lifted its game in blending bump compliance, chassis balance, agility and sharpness. It points confidently, is easy to place and rewards driver commitment with heady pace.

Meanwhile, the latter feels more agitated in character. The Abarth shimmies and shakes over road imperfections with more fuss and animation, its strident front-end grip tempered by noticeably slow steering to ease the tendency for the Italian, with its scant wheelbase, to throw itself off into the scenery. And all while you yell: “C’mon you bastard!” through silly grins and chattering teeth while the throttle’s pinned to the deck. 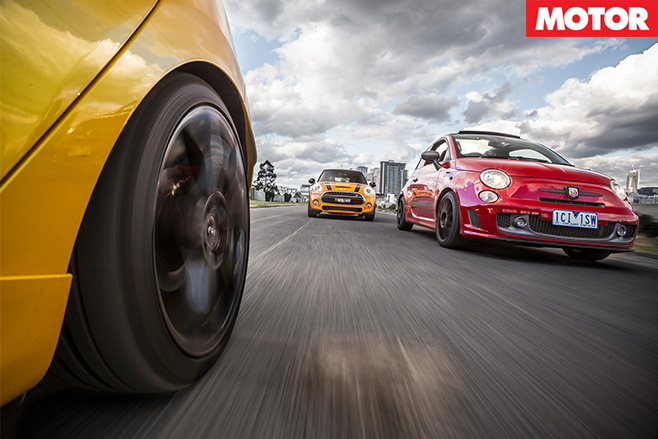 The Clio isn’t quite as darty as the Mini nor as fidgety as the Abarth, but is incredibly sure-footed and, unlike the Cooper S, keenly focuses engine energy into brisk motion.

It’s a clear, accurate and quick corner-carving tool without histrionics or the need for manhandling. There’s a certain sweetness at play in the Clio – it’s both engaging and easily kept within its limits, which is a tough balance to strike.

Up to about eight-tenths pace – and for most driving below it – it’s the Mini’s game to lose. Its blend of refinement, premium feel, comfort, ride and on-demand pace is quite unprecedented for a car its size. This is a crucial point when considering the all-’round ownership experience. 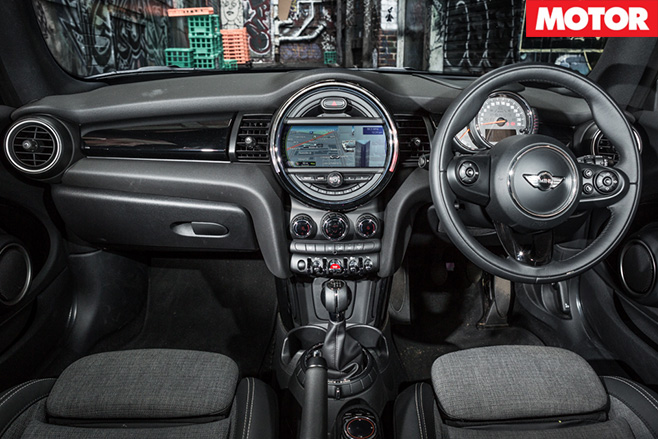 Holistically, it’s a nicer car than the Renault and far more grown up and sophisticated than the Abarth. Up to eight-tenths. Where the Cooper gets frayed around the edges, though, is when you push it to nine-tenths and beyond.

On a racetrack, that punchy 2.0-litre engine starts feeling flat in the top-end. But the major shortcoming is that the Mini seems to lose more of its sharpness and agility the closer it gets to its limits.

Lean hard into its 205mm 17-inch Hankooks and the Mini’s mass – a modest 1160 kilos, mind – takes over. It feels heavier and more ponderous than it ought to. That said, it’ll dance about playfully in the mid-corner provided you’re not grabbing its scruff too hard. 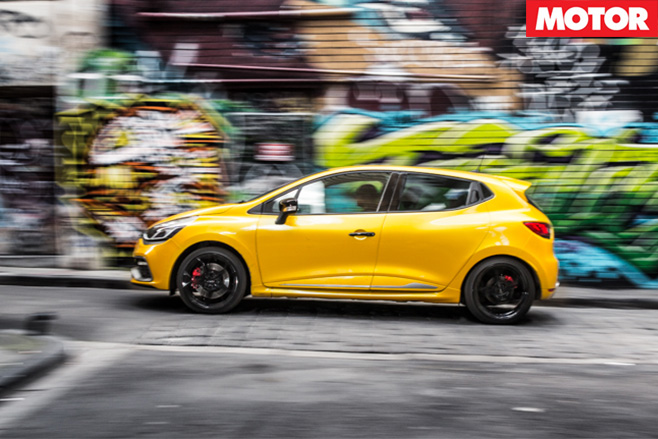 The Clio, by contrast, just gets better when you push on. The more you ask of its thoroughly well-sorted chassis, the more alive and engaging it seems to become. Where the dynamic package really comes together is in the way it responds in equal measure to steering, throttle and braking inputs. You never feel like you’re driving around a shortcoming in any area; the car seems to respond most intuitively to the driver’s wants.

That the Clio offers the same rubber footprint as the Mini (albeit on 18-inch rims) makes us wonder how Renault Sport has managed to pry so much more talent from its steed once the red mist descends. Especially when, at 1218kg, the French car has the kerb-weight disadvantage.

Fire the featherweight (1035kg) Abarth as hard as you dare into a corner and that front end bites in fearlessly, its tail feels firmly planted and you need a big head of steam to get the chassis shimmying on a smooth circuit surface. 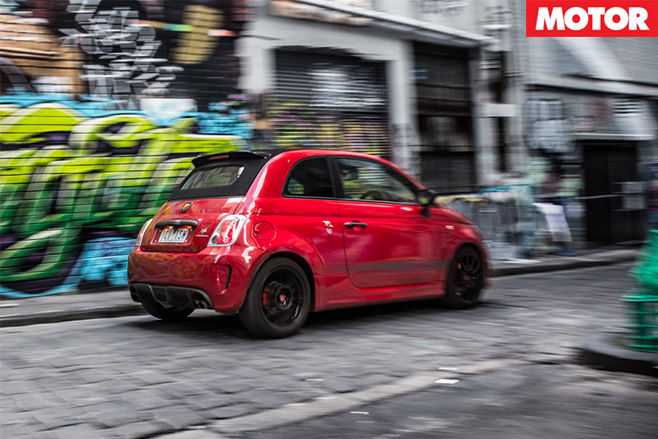 It’s much happier on track than anywhere out there in the real world and is at its best when subjected to the old-school hot-hatch driving technique: keep-it-flat and manhandle the thing! The great shame with the 595 is that it’s only really a sweetie when treated with such disrespect, at an actual pace that’s quite a bit slower than the Mini or Clio.

Even at its best, the Abarth is still the problem child: the gearshift is flaccid, the seats unsupportive laterally during hard cornering, and it requires a driving position that’ll have you booking a chiropractor after a handful of hot laps.

You could chalk up all of the Abarth’s shortcomings as ‘character’ if the 595 wasn’t so damn expensive. It’s a great third car, a weekend plaything, a pony with few tricks so impressive that you’d go there in a shot if the price tag wasn’t much beyond $20K. But anything the size of a shoebox asking nearly $40K should have a lot of all-’round talent, not just a few tricks up its sleeve during the occasional track day. 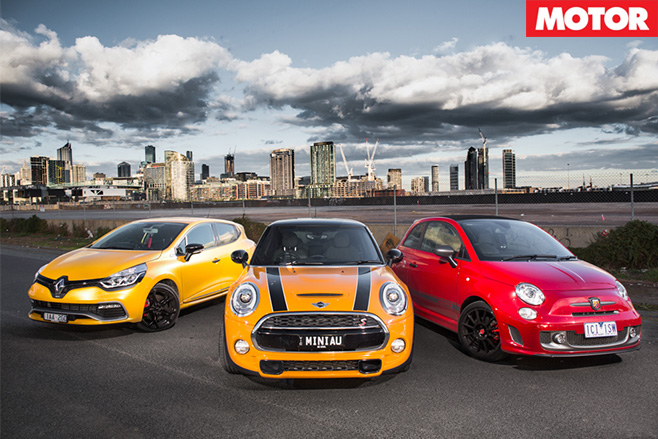 The Mini you could live with every day, easily. It’s a mighty impressive car with a huge depth of quality and want-for-nothing appointments. It’s a shame the real compromise arrives in the last 20 per cent of the driving experience. As a hot hatch, it could be a little hotter.

The Clio, though, has done much the same thing as its big brother Megane RS did to the regular (one size up) hatchback set; it’s introduced the soul and driving experience of a proper sports car into what would otherwise be a rather humdrum, predictable and sensible baby hatchback segment.