Over the course of more than ten generations and nearly 40 years, the Toyota Camry has proven its self as unfalteringly popular and one of Australia's hardest-working sedans, but you've probably never have labeled it particularly sporty, right?

But just once, Toyota Australia used the benign model as the basis for a concept car that was an unparalleled departure from the many generations of Camry we are used to seeing on the road.

At the hands of former Australian champion driver Alan Hamilton, the manic track-blasting SP9R was built to demonstrate the performance potential of the big-T brand using the major components of the 2003 Camry Sportivo - not that you would recognise the sensible sedan connection from any angle.

Its 2.4-litre four-cylinder was relocated from the front of the Camry and slotted in behind the two seats of the SP9R to drive the rear wheels instead, but resourcefully used the same gearbox and differential.

By today’s standards, the 112kW and 218Nm produced by the Australian-made 2.4-litre naturally aspirated engine probably wouldn’t going to set your trousers ablaze, but the concept’s race car space-frame construction weighed in at almost half that of the Camry and performance took a corresponding boost. 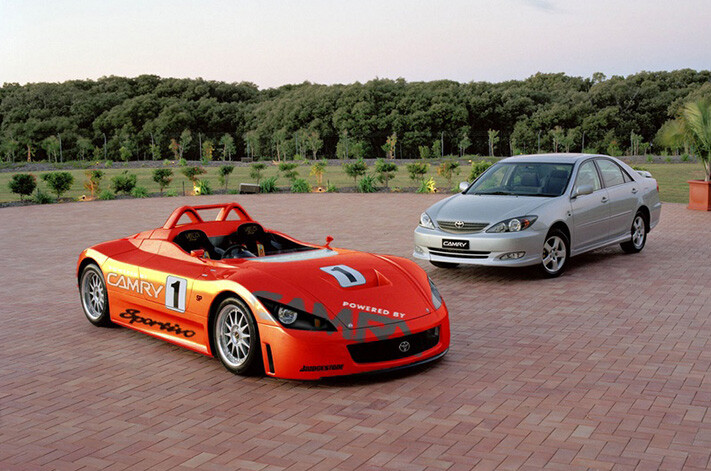 With a thin sliver of a windscreen and the absence of any creature comforts including a roof, the SP9R was strictly a circuit-only proposition and originally intended as part of a fleet of cars that would take part in a one-make racing series in 2004, but the project never made it off the ground.

At the time, Hamilton said that Toyota’s lightweight components including the all-alloy engine (it contributed just 115kg to the total mass) helped produce a capable track car. “That is a huge plus for the power-to-weight ratio and also the balance of the car,” he said.

A shame, given the series was reportedly about half as expensive to enter as any other comparable one-make series of the time, and could have been an accessible entry point for budding racers.

Even more tantalisingly, the car was equipped with road-legal lights and mirrors thanks to its Camry donor and the hope was to eventually produce a number of models that could be registered and driven in public, but this ambitious plan also failed to come to fruition. Toyota would have to wait until 2012 to really make a splash in the high-performance pool.

With a desire to attract a more youthful audience to the brand, Toyota finally cracked the formula with the 86 Coupe, and the tiny two-seater bucked traditional sportscar sales trends with its irresistible value proposition.

Interestingly, the car that now serves as the spiritual successor to the SP9R has a power and torque figure not dissimilar to the concept with 152kW and 212Nm. It’s a bit of a stretch to think that the SP9R’s promise of “a taste of things to come” was a prescient nod to the 86 but sometimes real life and a certain serendipity intervene.

Of course, these days, the Japanese company continues to demonstrate its less conservative side with its resurrected sports hero - the Supra - and more playful small models including the C-HR compact SUV.

It's fascinating to think that the rich selection of fun, more youthful and exciting Toyotas you'll find in showrooms today, owe a little of their genealogy to a track-focussed FrankenCamry that was born in Australia.