Holden was annoyed the HQ didn’t win 1971’s Wheels Car of the Year. To show Peter Robinson how tough it was, Holden sent him on a day trip to Bourke. And back.

Wheels has just covered 6000 miles in two months in a HQ Kingswood sedan as part of a long term consumer test on the most radical Holden ever. Here’s how we built the car and how it performed on the marathon run. Peter Robinson reports…

First published in the April 1972 issue of Wheels magazine, Australia’s most experienced and most trusted car magazine since 1953.

A CRACKLE from the radio suggested Walters had finally gone. Our cricket hating photographer wasn’t impressed. He half slept as the lime-green Holden Kingswood rushed over the corrugations at upwards of 80 mph, setting up a rooster tail of grey dust that hung in the air for miles behind. The driver grimaced at the news and then settled back into his relaxed position behind the wheel.

Read former Wheels editor Peter Robinson’s story of how he came to write this classic tale.

It was early afternoon on the notorious 100 mile dirt stretch that runs dead straight and due south between Bourke and Cobar in the mid-west of NSW. We were in the middle of a one day Wheels marathon test. The target: Sydney to Bourke and back in a day and in a Holden Kingswood six.

It was not intended as a record breaking run or to set fantastically high average speeds but rather to see if it is possible to drive 1000 miles in a day and still have time for photographs, an enjoyable lunch and yet arrive home reasonably san the same night. Our other justification for the trip was to submit the Holden to a gruelling and thorough work-out as a part of a consumer test we are conducting on the HQ.

Following the release of the HQ, GMH agreed to let Wheels “build” a car up from the options list. We picked the car we thought would most appeal to the average enthusiast with a limited budget and practical considerations, such as a family, to remember. If cost was no problem a fully optioned Premier V8 or even a 350 Monaro GTS would probably have been the car, but we decided to stick with a six for the good reason that the Kingswood six is by far the best selling model in Australia.

On dry roads the car is predictable if not very quick. The soft suspension allows too much body roll and the driver finds he hangs on to the wheel for support in fast cornering. 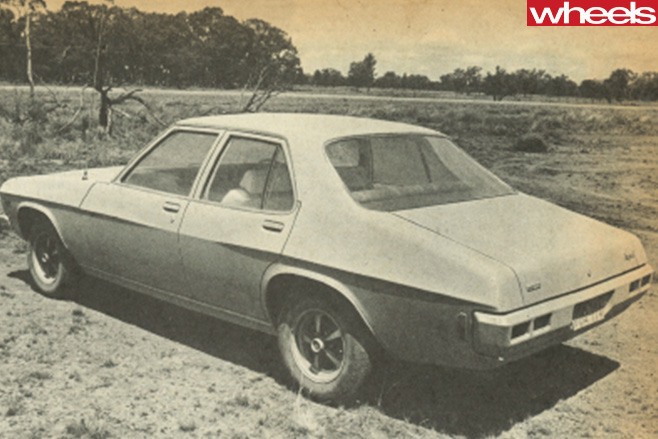 The grip on the road is excellent but the floating sensation of the body places an artificially low limit on cornering speeds. In the wet the car requires some care. Initially the front end gets very light and dead and gives every impression of wanting to let go in a big way. But a little experimentation and the driver learns to set the car up early for the corner by applying lock well before the corner in order to get the car off balance and moving around. Most times you still find you need more lock than was initially anticipated. The basic stability of the HQ is excellent – the problem is simply that the car doesn't like shifting off course. The ride compensates for the handling though. It is excellent over all but the roughest stretches. The softness which enthusiasts will dislike - and there is a firmer suspension option for them - will be loved by the average driver.

It gives the car the smoothness and comfort which normally belongs to cars with much higher price tags or funny French suspension systems. It can occasionally be upset by big bumps throwing the tail sideways and it always goes to the left but in most conditions it absorbs the shocks before they reach the occupants.

From Orange to Bourke the road slowly loses its bends and finally becomes almost perfectly straight between Nyngan and Bourke. It was in these conditions that the HQ cruised happily at near maximum speed.

The 202 engine is not a high performance unit - it was never intended as one - but its low rev limit and lack of top end breathing reduces its performance below the standard we expected.

This was accentuated by the fourspeed gearbox and the fitting of a tachometer which highlights the low speed torque and rev limit of the engine. Even with the high gearing the three indirect gears are too low. The engine runs out of breath at just over 4000 rpm - it will run to 4900-5000 rpm but it is straining hard and achieving nothing in the way of extra performance.

In normal driving, we completely forgot second and went straight from first to third. Because of the engine's low speed torque, this hardly reduces acceleration at all. In fact during performance testing at the Castlereagh Dragstrip the difference in time over the standing quarter mile between using all four gears and only third - and we tried various combinations, leaving out first, second and third on various runs – was only 0.3 of a second.

There is absolutely no need to. Run the engine beyond 4000 rpm and three properly spaced gears would at least equal the performance with the fourspeed box. The tachometer on the Holden is redlined at 5500 rpm but the same tacho is fitted to the car regardless of the engine and this creates the impression that the engine should rev better than it does.

Useable maximums in gears with the 3.36 diff is 30 mph in first, 40 in second and 60 in t third with the car running out to 4300 rpm or close to 96 mph in fourth, although with the low profile radial ply tyres the speedometer reads three mph slow at 30 and one mph slow at 90 which is highly unusual. 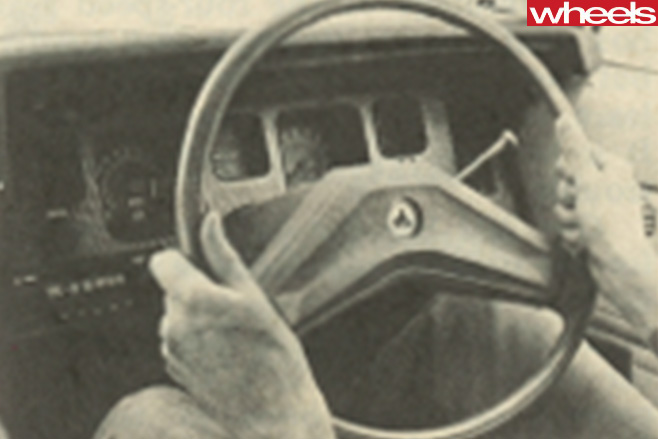 The HQ gets to 4000 rpm in fourth quite easily but the extra 300 rpm to the maximum speed takes much longer in coming. Drivers new to the car try to take advantage of the four-speed gearbox and change down before corners but those more familiar with the engine learn very quickly to leave it in fourth . It is just not worth the added noise or trouble. Our 202 HQ just breaks 19 seconds for the standing quarter mile and gets to 60 mph in 13.0 seconds and to 80 mph in 25.5 seconds. This is better than the car feels - which is a tribute to its general quietness once in top gear. Pressed hard through the gears the car is noisy but in top it is very quiet. The fuel consumption left us intrigued. On the straight road between Nyngan and Bourke, cruising at 4000 rpm, the HQ gave just over 15 mpg. It recorded a similar figure on the dirt on the run down to Cobar. In slower running between Bathurst and Sydney, where you are speed limited to under 60 mph, the car gave between 18 and 19 mpg which is still rather low considering the gentle way in which the car was driven. In city commuting the fuel consumption rises to just over 20 mpg if you tread warily.

What does impress us about the car is its fine bucket seats; the effectiveness of the flow-through ventilation at cruising speeds (it's even better with the windows open and there is little increase in wind noise); its marvellous visibility (it is the only car on sale in Australia which meets the 197 6 standards for forward visibility); the general feeling of solidity and the fine finish.

The new GMH bucket seats are excellent in the Kingswood, not so good on the Monaro GTS or the Statesman. They are all lacking in the infinitely variable squab adjustment which was a feature of the previous models.

Therein lies a story. A Fritz Keiper of Germany holds world-wide patents on all infinitely variable reclining seat mechanisms. It is impossible to use any such adjustment without infringing his patents.

Every manufacturer using such a device pays Kieper a royalty.  But the German mechanism was rejected by the local safety standards authority which meant GMH had to come up with a reclining mechanism very late in the design of the HQ. This resulted in the present design which has been criticised because of the differences in the angles of recline.

The General’s engineers tried segmenting the squabs at four degree angles but the teeth sheared off and they had to settle for six degree segments, which passed the local regulations. Further testing is being conducted and I get the impression it won’t be long before Holden returns to a greater variety of squab adjustments. 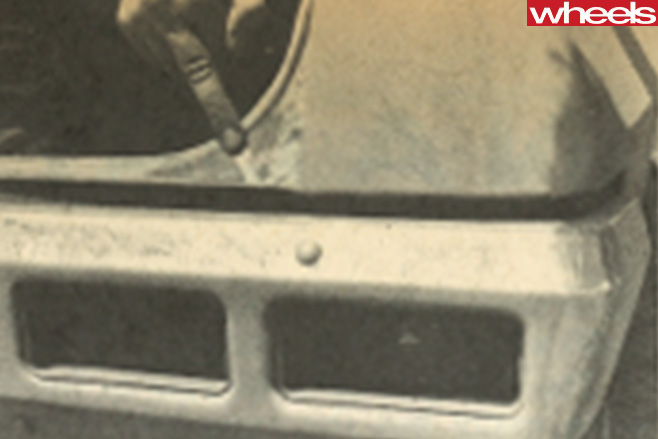 But this apart - and most people can find a very comfortable driving position - the seats are excellent in the Kingswood. Perhaps an increase in lateral support in the upper areas of the squab would be of benefit but otherwise there is nothing to criticise.

The brakes tend to be a little over-servoed but they pull the car up beautifully from high speeds and haven't given us any troubles with premature wheel locking. The handbrake beside the driver's seat lost adjustment quite early on, but this was fixed at the 3000 mile service.

However, the pedals are awkwardly positioned with the brake well above the accelerator making heel-toe changes all but impossible. The clutch pedal requires a long throw and is so positioned that tall drivers have to move their left leg around the steering wheel.

All this came out on our day long dash. One point which really impressed was the car's excellent dust sealing. After 100 miles of continuous dust the boot was entirely free from particles of dirt and even the interior, and we had the windows open for most of the way, had only a thin film of dust on top of the dashboard.

Finally, after 1098 miles the Holden returned to home-base in Sydney with just a few minutes to spare before midnight. It was not a trip I would like to repeat every day but it proved the suitability of the Holden to local conditions. We would wish for a more efficient · engine for improved fuel consumption and performance. But because the day was free from any memorable incident this alone is a recommendation for the car.

The potential of the HQ design is now more evident than it was at the time of its release. The cars are tighter, far better finished and not plagued by minor mechanical problems. The ride is outstanding and so is the visibility and the appearance is something which grows on you. Our car looks short and chunky, more than just a little sporty and, more important, It will still look modern in five years' time. The high initial price has scared many people off but sale of the HQ are going to gather momentum over the next 12 months and it will probably become a best seller.