In which the equivalent of 140 Armstrong 500s goes a very long way to demonstrating that there's a Falcon in Ford's future.

FORD took a giant step forward in its Australian future when five battered and travel-stained Falcons smashed through a banner at 1.42 am on a rocky Victorian hillside after covering 70,000 miles in nine days. It may be too soon in history to judge the effect of this considerable feat, but it is plain that it had the effect of making just about everybody in the country conscious of Falcons, if only for nine days. Poorly organised and managed as it was the endurance run came to mean a lot more than normal "record bids" simply because the company stood up beforehand and announced its intention of doing it. This one simply could not be swept under a rug.

The industry and motor sport authorities saw Ford's announced intention as a little amusing, particularly its intention of averaging 72 mph on a circuit which makes Lakeside look like a roller skating rink. But the equivalent of 140 Armstrong 500s, or nearly four times around the world, or 60 return trips from Melbourne to Sydney later, they had to eat their words. The cars had more endurance than the drivers; extra pilots were hauled unsuspecting from their warm beds at midnight to be rocketed out to the bleak and chill proving ground in the You Yangs to sit over a fire and wonder how they had come to be there, anyway. 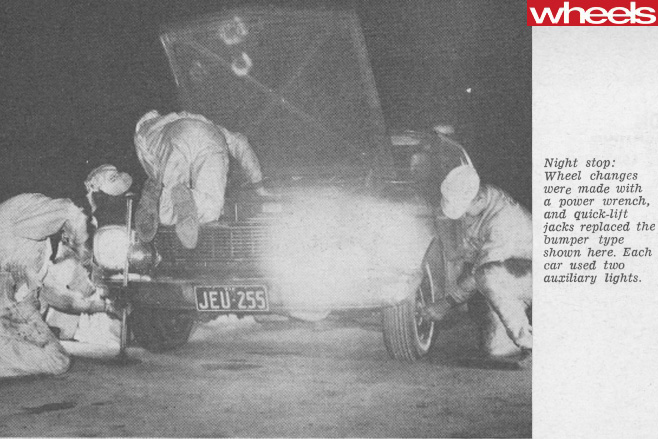 The bid, as the "Financial Review" commented acidly, succeeded in spite of the organisation, not because of it. The selection of drivers was very much on the old buddy system, and did not represent the best available in the country, oil company jealousies notwithstanding. One driver had never raced before, let alone held a CAMS licence, and there were some strange faces in the cars that the old motor sport hands could not recognise. Then both Ford and Dunlop grossly underestimated the tyre wear factor for the new SP41, the Ford mechanics initially had too few tools, the tyres were originally fitted without tubes, spectator control was non-existent, and there were not enough crash and fire units around the circuit.

But despite this, and despite the average being lowered in the first few days to ease the rate of tyre wear, the cars came through - with enormous prestige. The 2.25 mile circuit is dreadfully difficult, mainly because it was built to incorporate high vertical and side loadings on wheels and suspensions. New drivers going out for the first time came back in assorted stages of twitching, but after spending time learning it found that one could save half a second here and there by thinking ahead. Nevertheless, they still had to point the cars every foot of the way; for instance, if one came over the top of ·the 4 in 1 hill and started the downhill approach to the esses a foot or so off line, then you ended up 20 ft or so offline at the bottom amid low shrubs and immovable objects called boulders. 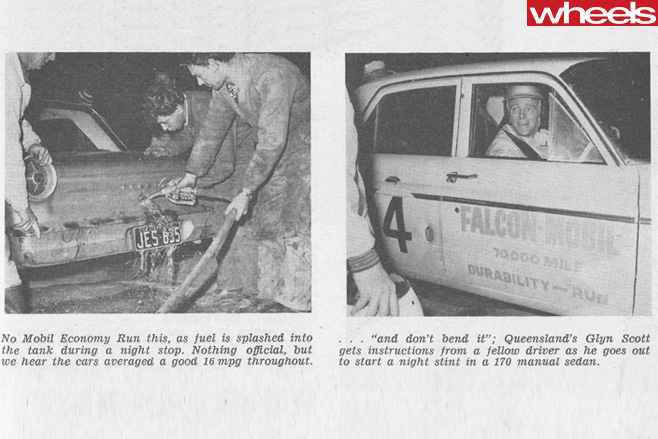 The worst time of the day was just before dawn, when fog settled into the dips, windscreens frosted over, and heavy dew made corners quite greasy. The 32 drivers generally worked on the basis of two hours on and four off, but many "iron men", like Tom Quill, insisted on doing double duty. There was a 24-hour meals service, and the drivers slept either in the 12 caravans available or went 15 miles back to hotels and motels in Geelong. The mechanics worked 12-hour shifts and sometimes ate their meals sitting on straw bales lining the pit road.

The drivers got quite intense about the car they were crewing, regarding it as "their'' car and threatening each crew member with instant disgrace if he bent it. Car 3, the four-door sedan that eventually covered the most miles and was the only one not involved in a shunt, was team senior ''Wild Bill" McLachlan's pride and joy. Somebody stuffed the red No 1 two-door hardtop, Harry Firth's baby, into a boulder, and that caused strained relations. Victorian comingman Brian ("Brique") Reed had a tyre slit on him and bounced into a gully, while various people rolled various cars.

Each time this happened the reserve car - unprepared for the event, - was called in and the mechanics jumped in to repair the badly damaged bodies with whatever tools were handy. And they did a remarkable job. Red No 1 set four new records as soon as it got back on the track after being rolled. And the only serious mechanical failures were those caused by the cars going off the road. 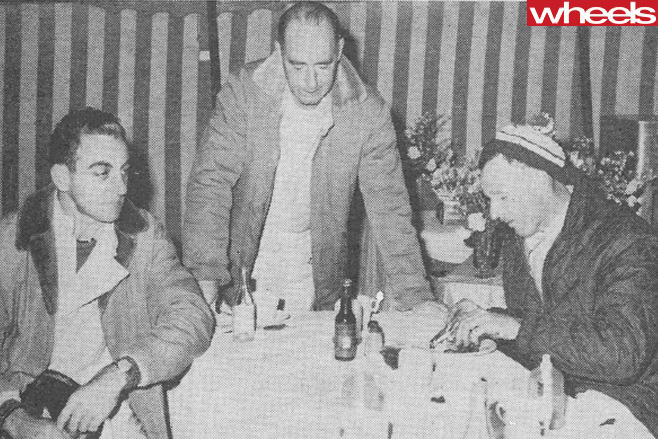 But the drivers, by Wednesday, the fifth day, were starting to enjoy the wearying project immensely. Jon Leighton, head of the Birchwood School of Motor Racing, spent his time on the track in experimenting with various lines and techniques, discovering the circuit all over again every few laps. Bruce McPhee concentrated on being as neat and tidy as possible, yet still managed to go extraordinarily quickly. The drivers were signalled every few laps with the lap time which pit managers Les Powell and Max Ward wanted them to maintain, and this was generally around 1:51 or 1:52. Some of the top men were allowed to lap around 1 :48 and 1:49.

One or two ran out of fuel on the circuit, but orders were that when the fuel gauge needle covered the "E" sign the driver was to do five more laps, giving the pits progressively five, four, three, two and one toots on his horn as he came past each time. Changing drivers, wheels, fuelling, cleaning windscreens and checking oil levels took around the two minutes, although the pit stops speeded up toward the end. They were refuelling the cars from drums for two days before some bright lad discovered that there were two 1000-gallon drums of Mobil not 100 ft away.

Dunlop's radial-ply SP41 tyres came in for as much – if not more – torture as the quintet of Ford Falcons. Estimates of wear were way off the mark and on the first day of the nine-day event about 100 covers were used. There was a twofold cause for this – first the surface of the track was highly abrasive; second, the lap speed of well above 70 mph was chewing out
tyres quicker than expected. 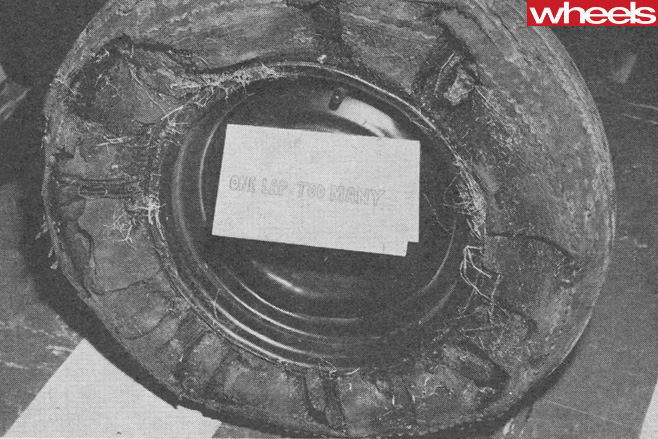 The nature of the track layout and the "green" top dressing shredded tyres to such an extent that drivers were signalled to ease up. When this was done tyre life was appreciably greater, although 70-plus mph lapping was still being put in. The Dunlops were worked hard all the time - and on occasions, grossly overworked. But throughout all the tyre incidents, not once did a cover part company with the rim, even when one driver returned at 60 mph to the pits with its deflated cover on fire.

On the third day of the run, at the drivers' request, tubes were fitted to the SP41s. As the twisting 21-mile circuit became bedded-in, the tyre wear factor improved and a set lasted roughly six hours. By the second last night only one of the five cars needed a tyre change. And this was to the front offside which had suffered punishment for hours.

It also must be pointed out that the Falcons were being driven at racing speeds on tyres never designed for track work. After the run ended layers of shredded rubber could be found on most corners. This had been chewed off by the scrubbing motion of the wheels under 90 mph cornering. An inspection of the track afterwards showed that the bitumen topping had
been worn away 'by the pounding of the cars leaving a hard, quartz surface. About 600 tyres were used in the event. The tyre bill was roughly £6000.