Ford has pinched, pulled, fiddled and finessed the Falcon to the tune of $40 million, most of it spent underneath. TODD HALLENBECK is our man in the inspection pit.

Yes, this is the new Ford Falcon. We'd better make' that clear because, unless you're seriously Ford-literate, the changes can be as hard as Wally to spot. The new Falcon – EL – is slightly new and most of its newness is out of sight, tucked under the rear.

The Falcon has been improved yet again – 14 short months after Ford retuned several niggling front suspension handling problems on the EF.

When EF was launched in September 1994, we described it as the "touchy-feely Falcon". Ford's $220 million makeover turned the outclassed, outdated ED into the new, feel-good Falcon. Problem was, it didn't feel so good through corners because of a nervous chassis. Compared with ED II, EF was a step forward, but against Commodore, Camry and Magna, it needed more work. Front-end refinements on EF II only highlighted the need for further tuning of the Falcon's five-link live-axle rear suspension.

Ford didn't have far to walk to find the answers. Across the road from Broadmeadows, Tickford had nailed down the EF's squirming suspension on its XR models with only minor impact on ride and comfort.

The real twist to the EL's story is not that the answers came from Tickford, but that Tickford had used one of Ford's suspension engineers – John Mole – to sort out the XR's handling.

Finally, after two years, EL picks up the XR-series rear end locating points and firmly plants the touchy-feely Falcon on the road.

According to Mole, Ford EF Falcon and EF II suffered from too much roll-steer- a factor of body roll versus axle movement. EF's roll-steer reduced its straight-line stability and made initial turn-in twitchy, so he lowered the Watts link pivot point on the differential by 20mm.

“Where the Watts link pivots is the roll centre - it's that simple,” he says.

Lowering the roll centre reduces the load transfer on the rear wheels during cornering.

“The EF and EF II had five percent roll-steer, which is a bit high,” he says. “EL has two percent.”

Accompanying all the revisions to rear-end geometry are changes to suspension and power steering to improve high-speed manners. Initial damping has been softened to better absorb road surface irregularities, while secondary impact damping has been firmed to control body movement.

The ride quality Ford set as a benchmark was the 5 Series BMW. The target may have been Bavarian high-brow, but the competition was – and is – Commodore's independent rear suspension.

Against its showroom nemesis, Falcon now scores major browniepoints. The Ford not only rides better, but is also more progressive and better balanced near the limit during high-speed cornering.

But you don't need to crank the Falcon into an apex at tyre-shredding speed to appreciate its positive feedback.

Even at touring speeds, EL feels noticeably less twitchy and more stable than both EF II and IRS Commodore.

Steering has a lot to do with it. Less power assistance has provided more feedback in GLi and Futura, and improved self-centring gives better straight-line stability.

Move into the Fairmont or LWB cars, and the steering turns back to its old habits.

“What you're probably experiencing is a point of transition where the speed-sensitive steering is giving too much assist,” explains Mole. 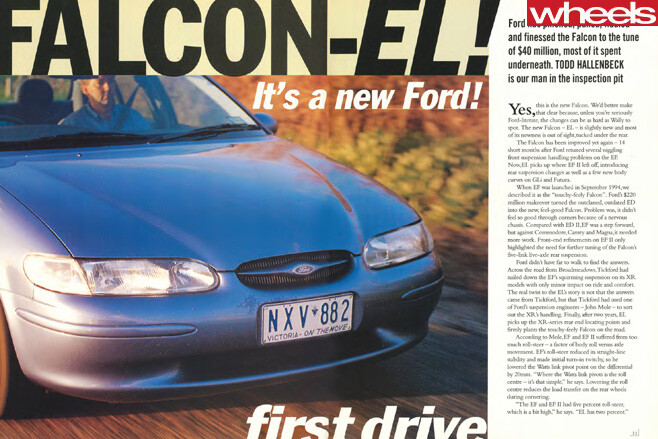 The speed-sensitive power steering is touted as a way of making the Falcon easy to park, and that it does, but the calibration of speed and sensitivity is not quite right.

At the limit, though, the Falcon's new suspension tune and steering all come together in a progressive, balanced and forgiving package. We turned several quickish laps around Adelaide International Raceway, and for such a big car, weighing a few over 1400kg, it is surprisingly nimble and quick to change direction. In situations where the old suspension would wallow and rock, such as during simultaneous hard braking and turning, the new suspension tune feels smooth and unbothered.

Engine and transmission haven't been touched, which means the harshness of the standard 4.0 litre six is still alive and vibrating. Ford has tried to reduce NVH by fitting all ELs with a laminated oil sump. Highly sensitive testing equipment may be able to detect a reduction in noise and vibration but from the driver's seat we couldn't.

GLi and Futura body changes to bonnet, grille, bumper and headlights, Ford claims, are an attempt to attract younger buyers and female buyers to Falcon.

Underlining the claim are poor sales of GLi and Futura compared with Commodore Executive.

According to Graham Wadsworth at Ford's design studio, research shows people like two eyes and a mouth and the EF GLi's and Futura's tight bonnet-to-bumper blank styling is impersonal and cold.

“We've also done a lot to improve the interior colours and added Chilli Red as an exterior colour,” says Wadsworth.

According to Roger Clarke, Falcon market and sales manager; “The average Falcon buyer is 49 years old. That's a terminal problem. In Falcon terms it's got to be 35-40 years old.”

XR6 and XR8 are the exceptions: the average buyer age for the performance Fords drops by as much as 10 years.

Passive safety features – identified by Ford research as a big selling point for women – continue the firm's claim to be the only Aussie-built car with standard driver's airbag. EL also passes European occupant injury standards for offset frontal crash, and international regulations for side-impact, via strengthened A and B-pillars, high-strength door intrusions bars and added high-density foam to interior armrests.