In 1999, a hot Ford arrived that Wheels could get excited about

In 1999, a hot Ford arrived that Wheels could get excited about.

This is the moment David Flint and his engineers at Tickford Vehicle Engineering have been waiting for. After eight long years, Tickford finally has the machinery to put the wind up Holden Special Vehicles.

The people who brought you ground-breaking Ford Falcon XR cars and two tiny litters of tantalising Falcon GTs are ready to unveil the Ford Tickford Experience (FTE). And unlike the GT, this is no short-term testosterone tease that resurfaces only once every five years. This time, Henry's chasing HSV on its home turf, taking Ford Australia into the new and unfamiliar territory of high-performance, luxury sports sedans.

The new FTE luxury-performance vehicle franchise will initially comprise TE50, TS50 and TL50 (based on Fairmont, Fairmont Ghia and Fairlane), mixing and matching a pair of extensively Tickford-tricked, 5.0 litre V8 engines with a variety of chassis and braking packages.

The cars will be powerful- the two engine options are rated at 200kW and 220kW- and well equipped. And expensive: At around $80,000, the TL50 luxo-stormer is set to become the most expensive passenger car Ford has ever sold in Australia. 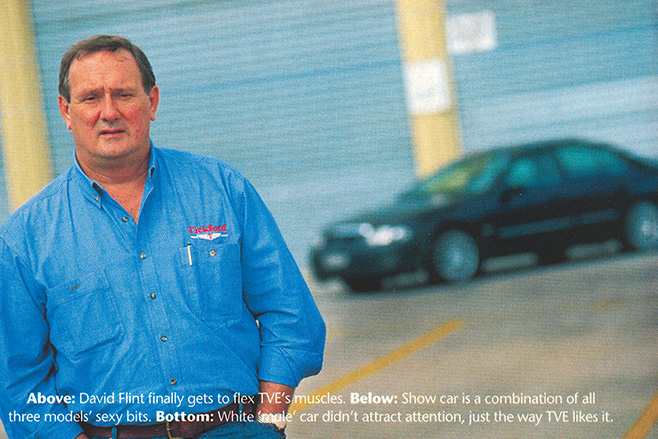 The T-Series range opens with the short wheelbase, 200kW TE50. It gets a much-needed upgrade over the standard Falcon brakes, with a new booster and master cylinder plus larger diameter, 330 x 28mm grooved front rotors and standard diameter grooved rear rotors.

Like its T-Series brothers, the TE50 comes with independent rear suspension, uprated springs, dampers and bushings, plus Tickford's own 17in alloy wheels, and 235/45ZR17 tyres.

The black car you see in the photographs is for show only and carries styling cues from all three T-Series cars. For the TE50 (and other models), Ford has replaced the standard grille, side sills and front and rear bumpers with custom T-Series items. Inside there are dual airbags, a black and grey Momo steering wheel, new cloth trim, six CD stacker and blue-on-white instruments.

The TS50 gets the 220kW V8, with enhanced' front and independent rear suspension with Koni dampers, 18in alloys on 245/40ZR18 tyres and leather trim.

Optional on both TE50 and TS50 is an Electronic Sport Shift auto transmission with thumb-controlled, steering-mounted shift.

The top line TL50 has the 200kW V8 linked to the ESS auto transmission, and shares the brake package of the short wheelbase cars but get sits own, softer suspension set-up and a sunroof.

So much for the basics. But how will these new-century fast Falcons drive?

Wheels gained an exclusive T-Series prototype test drive, some months prior to launch. Slightly shop-worn and less than sexy, the white AU Fairmont 'mule' gave us a taste of Tickford's acclaimed engineering abilities.

The mule car's 5.0-litre, 220kW engine was well down the development path, but at the time of driving some areas of noise, vibration and harshness were yet to be ironed out. Where the Ford Falcon EB/EL GT engine copped GT 40 heads, a larger throttle body, larger air mass sensor, GT 40 inlet manifold and exhaust extractors, the standard Explorer V8 fitted from AU onwards comes out of the crate with productionised GT 40 heads already installed. 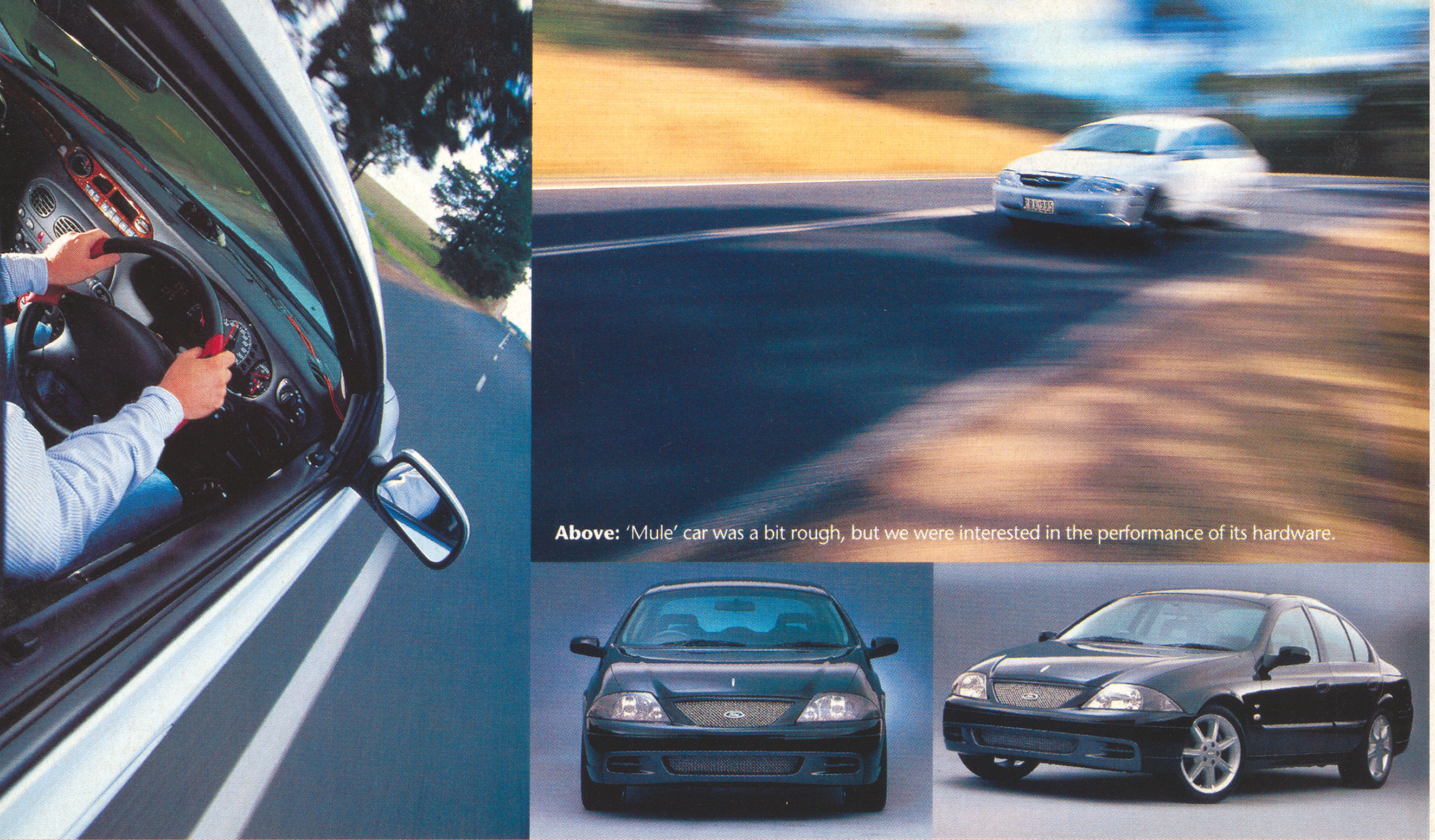 Throttle response was encouragingly urgent, noticeably sharper than the smooth delivery of the standard bent Henry, although the mule's test-tortured transmission (a four-speed auto) was suffering some shift shock at each 5500rpm upshift.

While vehicle styling is done locally by Tickford and Ford, new components (such as the patently powerful brake package) have been produced from an assortment of new and existing OE or aftermarket parts.

The ride height reduction on this, and probably production versions, is no more extreme than in the XR-series cars, although the FTE suspension will use more exotic components. On 18-inch wheels with Dunlop SP Sport 9000 245/40 ZR18 rubber (the biggest that will physically fit), the mule's chassis was immensely grippy.

The steering, while feeling slightly low-geared, had tramlining commendably under control.

With the front end's tendency to gently 'porpoise' over sharp bumps, however, the test car still felt like a lowered, stiffened Falcon. Buyers forking out for the finished FTE product will expect – and get – a little more suppleness and sophistication in the ride.

They'll also get what seems to be Australia's most outrageous stopping power, courtesy of the Tickford-developed, grooved dinner-plate discs at both ends, with four-piston callipers up front.

According to Flint, this stuff matters as much as horsepower. 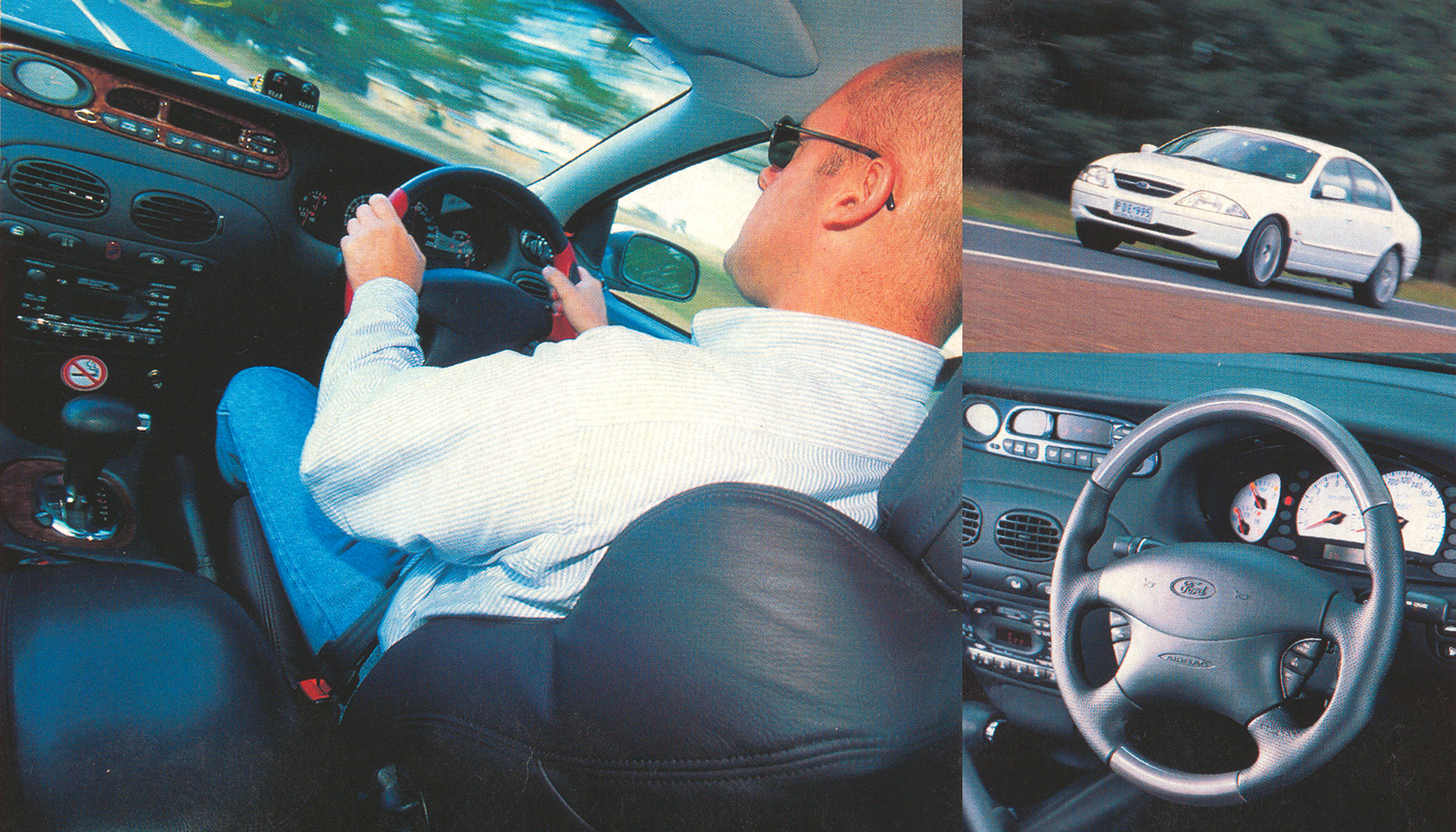 "What I'd really like is for our cars to be recognised as moving quickly and safely from point to point", he says. "I'm interested in the chassis, the brakes, the gear-change, just how comfortable and tractable the car is. The fact that you can do a straight-line quarter mile in minus three seconds is really of no interest to me. Besides, I've already got high blood pressure."

T-Series cars will be sold nationally through only 10 or 12 hand-picked dealers, and most of those will be members of Ford's new 'premier' dealer groups. Showroom space, signage and advertising will be aimed at distinguishing the new hot-shop products from the ordinary Ford flock.

Flint anticipates production of around 700 cars per year across the three-model range.

But how did Ford summon the courage?

The catalyst for change came in the form of an extensive brand equity survey, the results of which showed that Ford and its most visible product, the Falcon, were perceived as dull and unexciting. It was the same survey that prompted the formation of Ford Tickford Racing.

Ford's 'Live It' advertising campaign and the formation of Ford Tickford Racing began the turnaround in communications.

And while you can't introduce a completely new, more exciting Falcon overnight, you can certainly allow Tickford, a brand name that polled strongly for its performance image, to get hot with what you've got.

And branding is everything in this game, by admission of the master of marketing motors, HSV's John Crennan.

"If I was sitting where Tickford is sitting at the moment, my only fear in what they're doing is that the

"Tickford means everything from LPG gas, to a spoiler, to a sunroof, to a suspension kit, to an XR8 to an XR6."

Not that Crennan's company is above work like LPG conversions and spoiler kits; they just do it under a different brand name, HVD (Holden Vehicle Development).

"If I am proud of anything, I have kept the HSV brand very, very specific to performance luxury cars – we have not mixed the breed up in any way, shape or form."

Not easily intimidated at the best of times, Crennan says he welcomes the prospect of a challenge. "If you've got competitors going at it together, I would believe that the cake could become larger, rather than [our] having to concede some of the cake; I think that Ford coming in and modelling their operation to a large extent on ours, I look at it positively, and I mean that genuinely."

Flint is nothing if not a gracious competitor.

Ford Motor Company now, and for the next five years," Flint says. "Some of that stuff [HSV does] already, some of it they don't, and products is only part of it. But our cars will be sophisticated, well balanced, well-engineered cars, and that's all I can say.

"In the Flint world, we would have made this move earlier, maybe within two years of introducing the XRs. But we've built a level of business that's going to continue for some time to come, and we can start to put some cream on the top."

The cream's been well earned, too. It was in 1991 that the gritty Briton, whose CV in engineering and manufacturing includes a stint at Aston Martin, first came to Australia to establish the Tickford Vehicle Engineering venture with Ford.

"When we first sat down with Ford, they said 'You beauty, we want some exciting product out in the market place, we want some big 5.0-litre stuff, some hot six-cylinder stuff and some gentleman's cruisers' and so on," Flint says. "What we were actually planning to do was this (T-Series) sort of stuff".

The reason Tickford was sidetracked into the more volume-oriented XRs and LPG conversions, wasn't the obvious one of big corporation conservatism. Holding back was pretty much a joint decision, prompted in part by Flint's observations when Tickford launched the limited-edition EB GT in 1992. That car was an instant sell-out.

And therein lay the problem. Tickford may be described as Ford's 'performance partner', but it's a separate business – and one that has to make money.

"In 1991, you'll remember, Victoria was a basket-case, Australia wasn't too shit-hot and there was quite a lot of unemployment and labour disruption," Flint recalls. "Ford was not doing too well, it had its problems with EA and they'd got Capri around their necks.

"It struck me that Ford's propensity to sell anything other than Falcons would be a bit limited," Flint says. "After the EB GT, I actually took the decision to move away from that market, because I could see no way that Ford could support it. You make 265 vehicles or whatever it was, that sell themselves in 10 minutes, and after that, what do you do?

“You can't actually build a business doing very small numbers of very expensive cars once every five years. You need to have a strategy a bit stronger than that. None of that was in place."

Flint saw an opportunity for a specced-up six, a sister car to the XR8, which could still be largely built on-line by Ford. The XR6 idea had some detractors- including HSV's John Crennan.

"There were a few people who said the XR6 was a silly thing to do, including Crennan, when I had dinner with him one night," Flint says. "I think the six cylinder thing got to people. Why would people buy a six-cylinder performance car? Well, because it's cheap and it does the job. I've got to say it took our competitors a few years to catch up, and with the HSV XU6 they've caught up."

In the interim, the economy has improved spectacularly and the new vehicle market is at a record high. HSV, meantime, has kicked enormous goals in establishing itself as the aspirational marque among young buyers, with a very tangible rub-off on donor manufacturer Holden.

Why so long to get with the program?

One reason was that Tickford had no real cause for complaint.

"Last year we did 13,500 vehicles," Flint explains. "So where I used to say, 'We should be doing more exciting stuff', they'd reply, 'Your sales have gone up by 10 to 20 percent a year, your turnover this year is $45 million and you'll make profit on that, and you're not doing any special vehicles; life's not that bad, is it?"