Ford has fallen short of the Falcon GT legend since the early ’70s. Now, at last, there’s a car tough enough to try it on

Ford has fallen short of the Falcon GT legend since the early ’70s. Now, at last, there’s a car tough enough to try it on.

Teamed with Dunlop Aquajet tyres (waggishly known as Aquaplanes), the guttural GT roars and slides around the circuit, beginning a legend that will haunt Ford in following decades by setting standards that prove too difficult to replicate, let alone beat.

Amid all the XR GTs bar-lifting thunder and thrust, the clutch stands out. Talk about heavy. Like dribbling a bag of cement across a paddock, it makes calf muscles ache with exertion.

Even so, the GTs ropey rumble, backslapping acceleration, and breathtaking speed provide the perfect panacea. 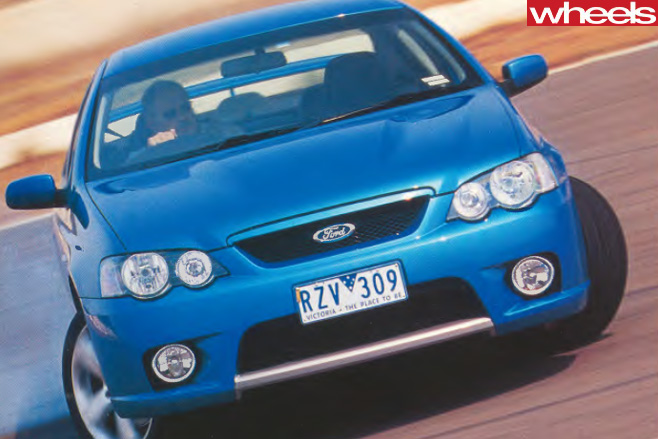 Flash Forward: 36 years on, and the world has changed. The rebirthed-by-FPV Falcon GT is still a four-door, still a V8, and still wears Dunlops, but that's where the bloodline ends.

Hugely more sophisticated than the original, the new model achieves a level of refinement undreamed of in 1967. But refinement is fine for Fairlanes; GTs need grunt. Gobs of it.

The engine is a very different proposition to 1967's V8. With two camshafts per head instead of one in the block, and twice as many valves, not to mention fuel injection and 5408cc capacity against a four-barrel carby and 4735cc. FPVs Boss hoss delivers 290kW where the XR made 168kW.

The Boss doesn't rev a whole lot higher, though. The GT’s tacho doesn't have a redline for proof, but an electronic spoilsport pulls rank on the clot of 6000rpm, cruelling a special sound that's been building since idle.

The 1825kg FPV GT is much paunchier than its relatively sylph-like 1422kg XR namesake, but brawnier torque and an extra gear help explain how the 1967 performance marks get blown away in a swirl of tyre smoke. 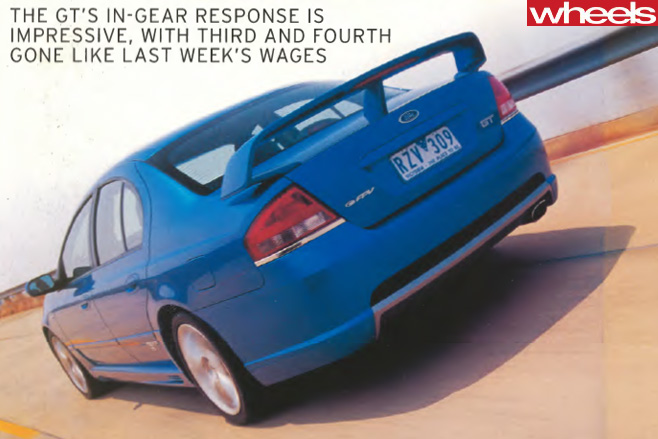 In its prime, the Ford Falcon XR GT destroyed all rivals by slamming the standing quarter in low 16s and hitting about 195km/h, flat strap.

Here, on a stinking-hot afternoon, hitting 30-something in the shade and chewing on dense bushfire smoke, we're disappointed when the FPV GT rips through the 400m sprint in only mid-14s. Part of the problem is that second gear is just a shade short, calling for an upshift at 95km/h or so, just on the safe side of the rev limiter. Same again in third; needing fourth just before 160km/h and the 400-metre mark. We persist, hoping to shave the times, only to find them lengthening as under-bonnet temperatures increase.

After a cooling respite come the speed runs. As expected, the limiter shoots dead the first four gears if the engine's left on full song too long. But in fifth, with the heat and all, the GTs dash is done, just teasingly short of the electronically applied 250km/h limit.

Early next morning it's more than 10 degrees cooler, and Calder Raceway hosts another batch of acceleration runs. It's soon obvious that this is more like it, With 0-100 kays in six seconds neat and the 400m boogie in 14.2 seconds. On this basis, a sub-14 is within reach, given cool conditions, the driver alone on board, and maybe more kays on the clock than this (preproduction) car's 2200 clicks. 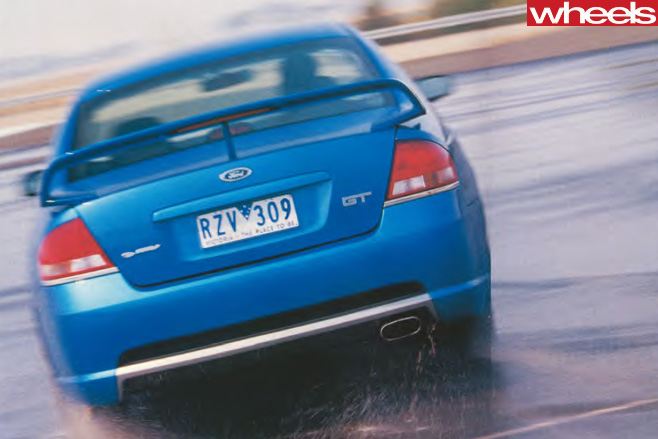 The GTs bullish 80-120km/h in-gear rolling response is also impressive, with third and fourth gears gone like last week's wages and fifth no cobweb collector, either.

Docile and elastically tractable when you tread lightly, the engine pulls hard and sounds sensationally mean when you sink the slipper. Given just the right throttle balance between too much wheelspin and not quite enough, the Boss 290 simply bites and bolts, delivering oodles of oomph without taking or giving offence.

Although acceleration hunters may quibble about the gear ratios being slightly lower than ideal for optimal performance, the big five-speeder's gearchange is on the pace. It's not the world's slickest shift, perhaps, but it's whippet-quick and sunrise-sure, even when really wrenched from slot to slot.

And it has synchromesh on reverse, too. Hard pedalling works up a sizeable thirst, particularly in this instance.

With a double dose of performance testing, besides enough photo-session circle work to make a dervish dizzy, it isn't surprising that we chewed through premium petrol at the rate of 19L/100km. Ambling at a steady 100 clicks, however, the GTs digital display typically registers an entirely reasonable 10-something litres per hundred. 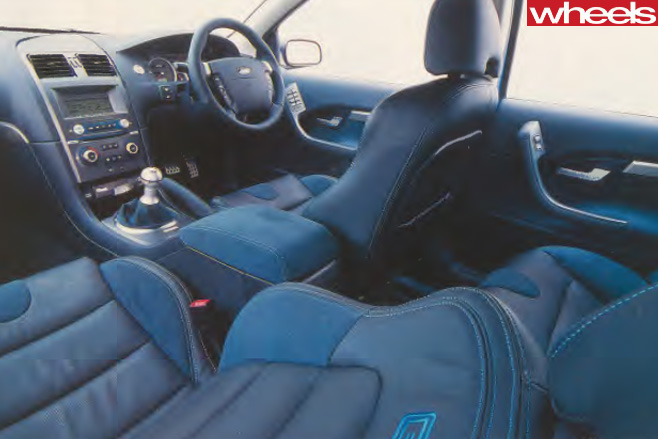 The big bugger slows with reassuring consistency, meaning little if any hardening of the pedal and/or loss of braking effectiveness. However, if your driving somehow demands even more than these admirable anchors, there are always the optional Brembos.

The husky drivetrain and mighty stoppers are all well and good, but it's in chassis dynamics that FPVs car conclusively cements its claim to the GT/Gran Turismo appellation. It's a chassis that rewards on rough roads as well as on smooth – through twists and turns as much as on straights.

The steering has the same basic specification as regular BA Falcons, but, with the wheel's weighting increase from light to medium, the feel is better suited to performance driving. Nothing's lost between your wrists and the road.

You steer, the GT points.

For a car of this size, mass, and sporting intent, the GTs ride-handling combo is truly outstanding. The way the supple suspension soaks up bumps, doesn't fidget over ruts or ripples, and isn't distracted by heaves or undulations makes a mockery of the notion that sports suspension must be reactively stiff and the ride necessarily lumpy.

In this case, the pay-off is not only a relatively comfortable ride, regardless of the road, but also truly confident roadholding and cooperative handling. 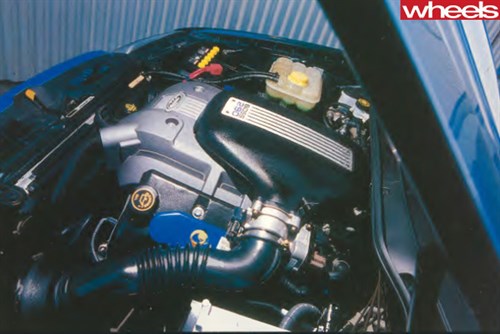 After enjoying the GTs chassis on the road, then taking it to the limit (and beyond) on the track and skid pad, we can attest that its handling is supremely user-friendly. Loser-friendly as well.

Tossed into turns, the GT enters the spirit with virtually viceless behaviour. Rolling moderately, it settles securely and presents nicely balanced attitudes that can be adjusted at will with the wheel and/or loud pedal. Tum too deep or hard and the understeer builds to a judder, easily relieved by quickly winding off some lock and taking a less greedy bite, while adding more power-assisted rear steer.

The tail responds to heavy-footed encouragement, of course, but there are always clear and early warnings of impending slides, and they happen so benignly as to afford every chance for correction.

Besides being highly talented, it's a chassis that establishes a rewarding rapport with the driver, and you can't ask for more than that.

The bottom line is that while you may be swayed by the GTs slightly conservative, yet nonetheless seriously commanding, appearance, and while the purposefully uprated interior is easy to live with (gimmicky Start button excepted, perhaps), the GTs secret is in the way it goes, sounds, steers, stops, rides, and handles.

A class act in every sense, the GT plays its part for real. And raises the bar once again. It's in the genes, y’see.