Is Australia ready for a world where the V8 is not king? Wheels was ahead of the curve with this question …

Is Australia ready for a world where the V8 is not king? Wheels was ahead of the curve with this question …

BIT LIKE boxers and briefs, this game of sixes and eights. Few buyers swing both ways, and it creates a conundrum that strikes to the core of automotive Australia: forced induction versus the purity of cubic inches. Specifically, it poses the question: is Australia ready for a world where V8s are not king? And if the FPV F6 Typhoon really is the best locally produced performance sedan, are we all ready to acknowledge it?

That FPV would enhance Ford's XR6 Turbo didn't take an induction expert to predict. In fact, both the Falcon XR6T and a company called Ford Performance Vehicles were unveiled on that same September morning in 2002. So, the question was never if, simply when, FPV would do it.

In FPV boss David Flint's own words, the F6 Typhoon is a "Super XR6T", an up-spec evolution of the Ford on which it's based. Changes to the driveline and suspension aren't substantial, but, then, they didn't need to be. The engine features FPV's own dual-entry air intake feeding the same XR6T Garrett turbocharger operating at 50 percent higher boost pressure (0.65bar/9.4psi). Air then blasts through a bigger 12-core air-to-air intercooler before entering the combustion chamber via inlet valves with new heavy-duty springs. 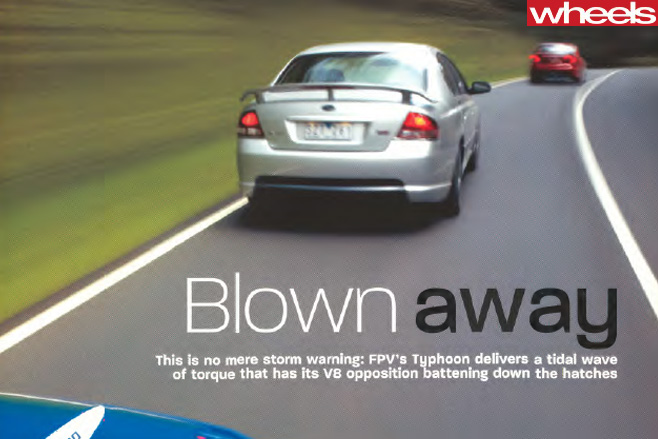 Here it's combined with a shot of premium unleaded, compressed to just under one-ninth its original volume by pistons fitted with stronger connecting rods, and ignited. The spent gases exit through an exhaust system that's unchanged from XR6 Turbo. The end result is 270kW and 550Nm.

The torque figure is the highest ever for an Australian production engine. Which is why the BTR four-speed automatic gearbox won't be offered in the F6 - it simply can't be counted on to reliably handle the torque. So, the only transmission is Tremec's T56 six-speed manual, with the same XR6T ratios and modifications detailed by Wheels last month. To recap, F6 Typhoon scores a shorter final-drive ratio of 3.73:1 but a taller first compared to the GT gearset. Second through sixth gears are shared in both F6 and GT. There are some changes to the casing and linkages, dictated by packaging the T56 behind a six instead of a V8.

In the real world, this gearset means Typhoon has longer overall gearing in first, and is more closely stacked second to sixth. This approach would make sense in a highly-strung turbocharger installation with nothing down low, but not with the Typhoon's mild boost or its table-top torque curve.

We head for the hills north-east of Melbourne, where the roads climb and straights are scarce. Blacktop carves through the densely wooded state forest, curving and glistening like a snake basking in the sun. Nature's peace disintegrates on the cresting wave of our thundering invaders. The rich, deep-throated growl of two angry V8s reverberates off the timber, punctuated by tyre chirps and cornering squeals.

A third entity leads the charge to the top. Its smoother yet equally predatory roar carries a screaming, high-pitched undercurrent. Flashes of silver glimpsed through the trees, then blue, then red, which vanish as quickly as they appeared. 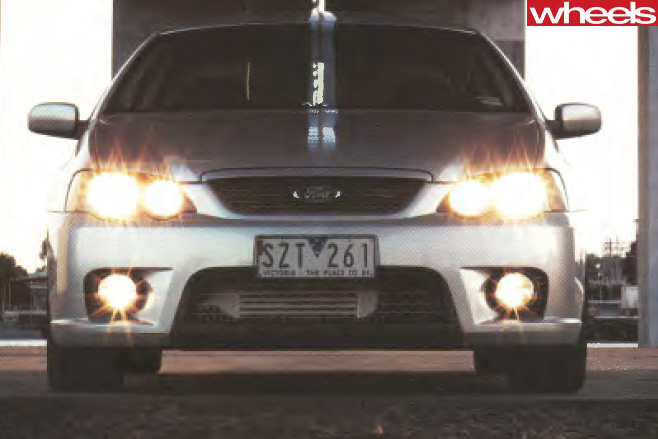 The V8-propelled FPV GT and HSV Clubsport claw back mere centimetres on the exit of each corner as Typhoon's turbo spools up. Once on song, the F6 wrestles the advantage back from the V8s and turns the tide. It's not a big win, nor does it romp away, but slowly it gaps the others. It's an ominous sign - the force-fed, howling fury of a Typhoon out-muscling the V8 horde. But before we delve deeper, let's check out the V8s.

This is the first time we've compared the Z Series Clubsport and its 6.0-litre LS2 with the FPV GT and its new six-speed T56 gearbox. The Clubsport's sizeable cube advantage would seem reason enough for the GT to feel nervous. But the peak power and torque differences are minimal - less than 3 percent - because FPV efficiently milks every drop from its classy 32-valve, 5.4-litre Boss V8.

But there's no denying the HSV's new lease on life. Rich veins of torque course through the Clubsport, which now enjoys nothing more than to show off its ability to defy rear-wheel traction. It's happy to lope along at freeway speeds, but drop gears and belt the throttle and a Pirelli P Zero is the last thing you'd want to be.

On the straights, the advantage goes to the HSV over the GT, but by the barest of margins. And only until the next corner, where the Clubsport's weaknesses conspire against it. It can't match the GT for steering feel and, despite copping a brake upgrade, lacks tangible quality feel through the pedal and endurance when you're on a serious charge.

It's an incremental advantage to the GT, whose clean cornering lines contrast sharply with the Clubsport's less-refined curve control. Where the GT settles quickly, holding the line as you finesse the throttle, the Clubsport scrubs ever-so-slightly wide in response to any push from the rear. Throw in a rutted or crumbling surface on the apex and, where the Clubsport feels unsettled and demands more lock, the GT barely flinches. 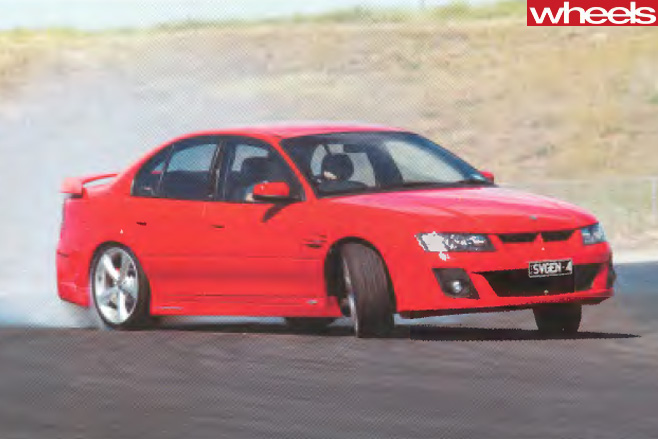 A new set of cogs addresses the GT's biggest weakness and endows it with acceleration out of corners to properly fight the Clubsport. It also has firmer springs front and rear that don't damage its grand-tourer ride quality, yet add firepower to attack mode. The steering's slightly heavier than the Typhoon's as a result, and the better for it.

Beefier springs mean GT has less diagonal pitch on turn-in, it sits flatter through corners, and also better resists squat under acceleration and dive under brakes. It's a subtle change, but, coupled with that extra gear ratio, it moves the Ford a notch or two along the slider between grand tourer and hardcore sports sedan.

Put simply, the GT's suspension is more convincing, more cohesive than Clubsport's. The GT instils real trust in its driver; the Clubsport, it's got to be said, leaves the door to bad behaviour slightly ajar.

It almost seems unfair to throw the Typhoon into the same pit as these two old enemies; unreasonable on the V8s to unleash this new, high-tech predator into their midst. Though not exactly blown away by Typhoon's force, they are bested for in-gear acceleration.

We're back to boxers and briefs, because the FPV F6 Typhoon possesses intrinsically different dynamic characteristics to the V8s. Softer springs at the front mean it dives a little harder under brakes than the GT, despite its 60kg weight advantage.

Turn-in is not as sharp, nor does the steering wheel feel totally composed or settled in your hands as cornering Gs climb. It's lighter, and demands less effort, but has less resistance to fend off that springy return-to-centre action. Worse, it can, at times, withdraw you from the moment, as you divert more attention from road to wheel. 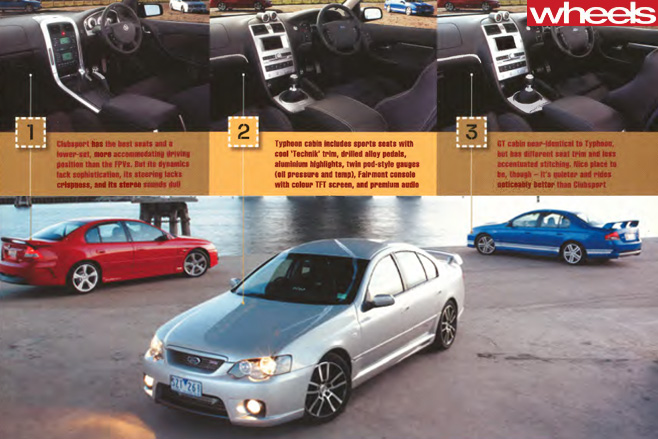 Comparing the Typhoon's cornering composure with the benchmark GT is a study of increments, but, like that one small pimple on a model's face, once discovered, it's eternally distracting. Wandering thoughts, however, are shattered as the corner opens and the straight beckons.

Where 21st-century V8s are about immediate pleasures, the F6 is a thoughtful beast. Punch the throttle on the GT or the Clubsport and you receive an urgent reply. No waiting, no building, just a hard shove in the back as the car bolts for the horizon.

The Typhoon takes a more considered approach. You almost sense it weighing up your request before responding as the turbo comes on stream. Confirmation that your wish has been granted arrives first in the form of a low, windy whistle. It's accompanied by a soft urge, a tentative increase in velocity that builds exponentially, doubling in intensity with every fresh lungful of air.

The TYPhoon's turbo lag is short, but requires familiarity. Adjustments to driving style must be made; the delay taken into account. It may be only a matter of tenths, so get into the throttle sooner and wait for the response instead of burying your right foot further with impatience. The rewards will come; when they do, you need to be ready.

If V8 initial acceleration is akin to being hit with a giant cricket bat, the typhoon's is more like climbing into an enormous slingshot. There's no instant wallop that smacks you in the back, but it's a monstrous force nonetheless, like the meteorological phenomenon whose name it bears.

Pecking order? The Clubsport is third, owing to less communicative controls and its relative lack of on-road sophistication in such esteemed company. Both Fords deliver better driving dynamics and instil more trust at the limit. They also flatten the road's irregularities more convincingly than the HSV.

Splitting the two Fords is tougher, much tougher, and demands a more critical eye to isolate the differences. The GT's better steering edges it ahead, but that slim advantage is blown away by typhoon's surging in-gear acceleration. We're not talking tenths here, but whole seconds and sometimes longer.

More than enough for Typhoon's thrusting turbocharged performance to catch both V8s with their pants down. 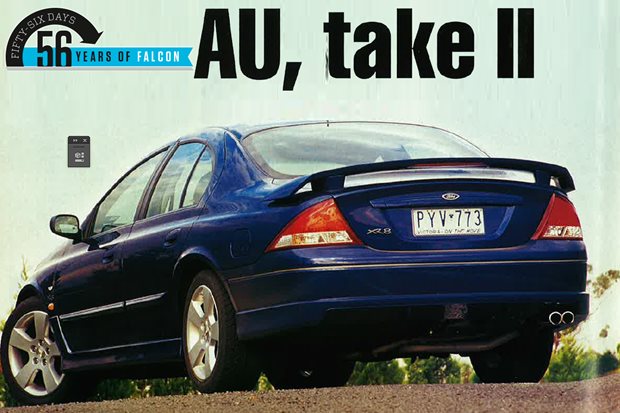 Ford's AU II re-think is a better car. But is it good enough to tackle Commodore? 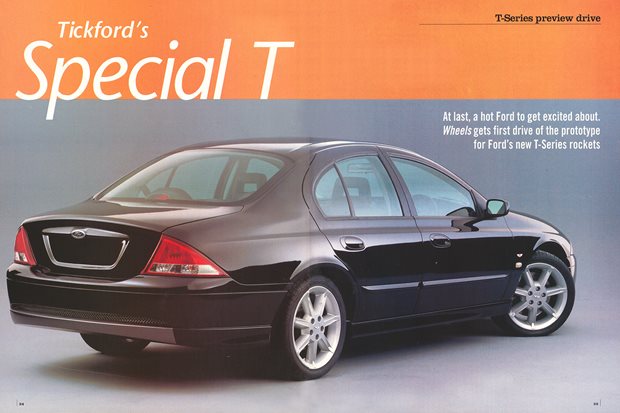 In 1999, a hot Ford arrived that Wheels could get excited about