Get up close with Jeremy Clarkson 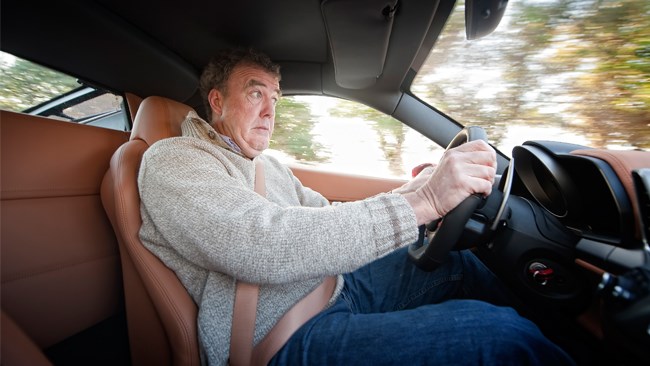 Get up close and a little too personal with Jeremy Clarkson in this month’s special 3D edition of TopGear.

Get up close and a little too personal with Jeremy Clarkson in this month’s special 3D edition of TopGear.


Slip on the 3D glasses and become immersed as Clarkson manhandles the brilliantly brutal new Ferrari 458. Okay, it’s not as good as Avatar, but it ain’t bloody bad. Here’s what Clarkson thinks of the car…

Ferocious? Ferocious might as well be defined in the New Oxford as 'Ferrari 458 Italia at full blast' for evermore.

Ferocious is the word that went through my head once I'd parked the 458 and thought about it and tried to shake the ringing out of my ears and failed. It's a ferocious car – ferociously exciting and ferociously brilliant and ferociously fast.

And now we've driven it on British roads for the first time. What is it about Pommy roads? They seem to have a special ability to throw a lot of cars from the continent all askew.

It's something about the way the roads flow, the way the bumps and holes are 'constructed' and the way the cambers work – or don't – that seems to add up to a unique type of stress for a car's chassis.

Ferraris have failed this test in the past. We expect this new $580,000 458 to pass with flying colours.

The new direct-injection engine is deafening once the baffles in the exhaust pipes are open, and as the revs build toward the 9000rpm cut-out – yeah, 9000rpm in a 4.5-litre V8! – so does the scream, a high-pitched, rasping wail that's even more stirring than the last of the previous-generation mid-engined Ferraris, the stripped-out and raw 430 Scuderia. Now obsolete.