IN THE END, Ford Performance Vehicles went out with a whimper, rather than a bang.

In a noble attempt to bury bad news under good, a Ford Australia press release, issued November 11, 2013, trumpeted the return of the Falcon XR8 in 2014, confirming the “retirement” of Ford Performance Vehicles, after 12 years, virtually as a side note in the fifth paragraph.

Rumours had been blossoming since mid-2012, when Ford Australia took full control of FPV after its UK-based, joint-venture partner, Prodrive, selected reverse on the deal. Since acquiring Ford Australia’s previous performance partner, Tickford Vehicle Engineering (TVE) in 2002, Prodrive had held a controlling 51 per cent share of the operation.

Citing the acute decline of local large car sales, Prodrive not only withdrew from FPV but exited the country altogether, with former Asia-Pacific Managing Director, Bryan Mears, now entrenched in the world of corporate consulting.

In an interview for our ‘Into the Future’ feature (MOTOR June, 2012), Mears touched on FPV strategic planning, saying, “We’re looking out as far as 2016”, adding that despite the fact he had an open mind on the development of non-Falcon based products, the company was planning to stick with one core line of vehicles. FPV and 2016 will never meet, sadly, but the FPV road had been getting rocky well before the bottom started to fall out of Falcon sales in late 2010.

Management turmoil and job cuts were recurring themes following the retirement of long-time MD, David Flint, in 2006. Flint had kept a steady hand on the wheel, having established the joint venture manufacturing operation between Tickford and FoMoCo in 1991, and managing the transition from TVE to FPV in 2002.

Following a decade-and-a-half of Flint stability, his replacement, former Saab Australia MD Sak Ryopponen, lasted just seven months. Hired in June '06, Ryopponen arrived as the first of two rounds of redundancies was in full swing. Prodrive was on a mission to pull cost out of the business, and by January '07, he and five senior managers, as well as another 30 employees, had departed the building.

Eventually, Rod Barrett was recruited as FPV general manager in August '07, but the same cost-cutting imperative saw him exit, with 12 others, in a mid-2012 staff cull.

At the time Bryan Mears, who had absorbed the role of FPV MD, positioned the move as, “A pragmatic decision to re-size the business to fit demand.” But FPV was clearly in distress, and the question on everyone's mind was 'why is demand shrinking?'

From a product point-of-view, FPV had morphed out of TVE at a perfect moment in time. In 2003, Tickford versions of the unloved AU Falcon gave way to FPV versions of the far more palatable BA, FPV reviving the iconic GT badge with its first offering. 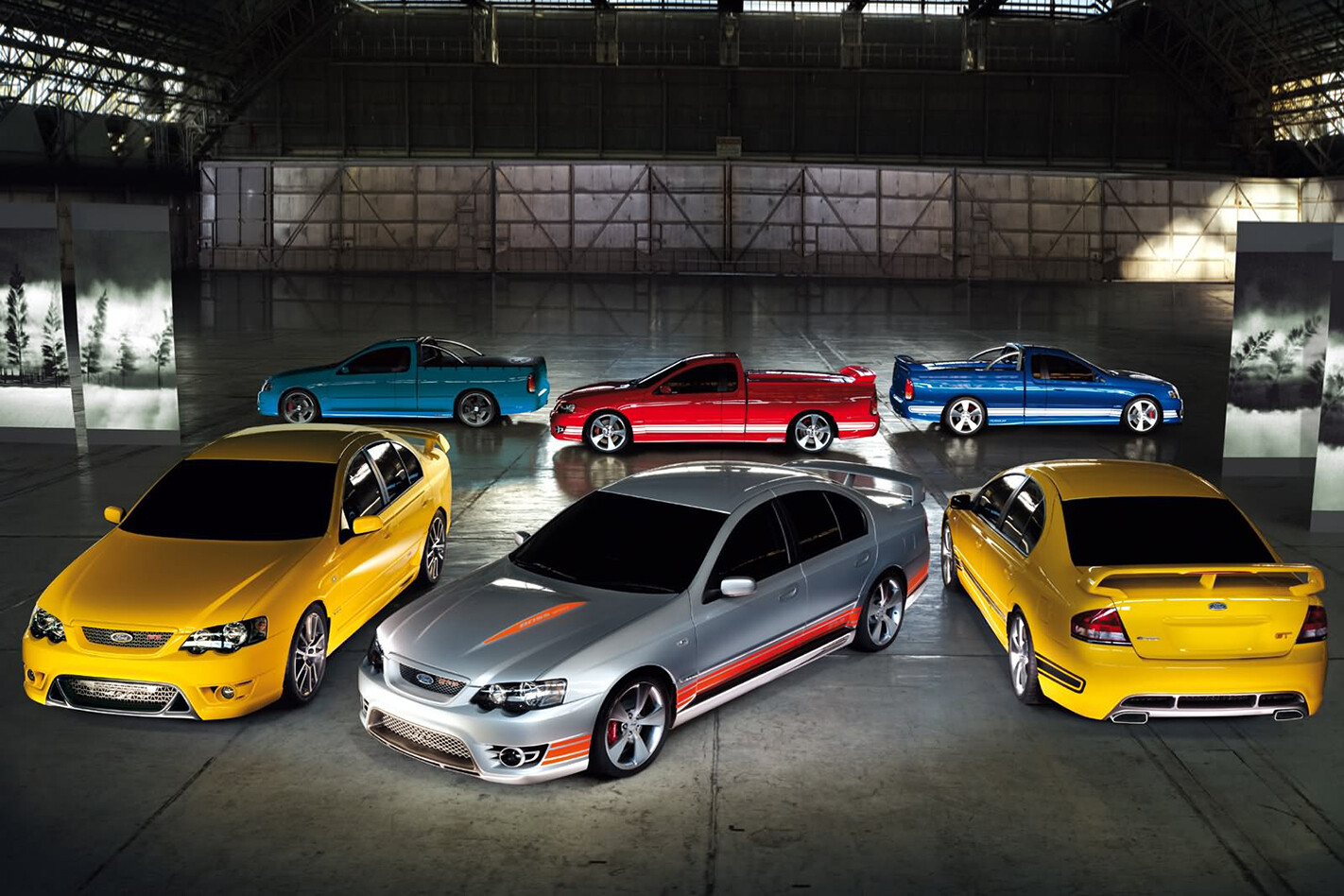 The premium GT-P variant and Pursuit ute completed the line up and FPV was firing on all cylinders, taking the fight to HSV’s VY- and VZ-based Clubsport and Maloo models.

Again, in mid-2006, there was some vigorous FPV chest-beating in response to “six successive months of record retail sales, including an all-time record monthly result of 226 new FPV purchases in June.”

Tap-dancing around the fact it had knocked off HSV, Ford’s performance partner added, “FPV has overtaken its direct rival in total volume with 1151 sales Year To Date – a 28 per cent increase over the same period in 2005”.

By this time, Ryopponen was in the MD’s chair, noting "to achieve outright leadership in such a competitive segment of the market, particularly against a rival that has been in this business for over 15 years, is testament to the fantastic range of products that currently wear the FPV badge."

FPV’s take on the turbo version of the locally-produced (Barra) 4.0-litre inline six had also emerged with the BA II in ’04; the 270kW/550Nm F6 Typhoon adding another potent weapon to the brand’s arsenal, not to mention taking out MOTOR’s 2006 Australian Performance Car of the Year gong in BF guise. Happy days. But by the end of the year, Ryopponen, product strategist Mark Behr, marketing manager Roger Gray, and corporate communications manager Steve Colquhoun, as well as a quarter of the roughly 150-strong workforce, were out the door. Why?

The senior management group was sacked in a Prodrive-led cull, only days after FPV announced its best ever annual sales result, ultimately selling 2144 cars over the course of 2006.

Then-Ford MD, Tom Gorman, cut to the heart of the matter early the following year, when he inferred that on the manufacturing side, FPV was structured for even larger volumes, and costs were simply too high. At the same time he admitted, “FPV had a management structure that was a little bit top-heavy”.

From that point on, it was clear Prodrive was expecting bigger returns from its investment in the FPV joint-venture, and was willing to act quickly and aggressively to extract maximum value.

To compound matters, the 10-year run of the sixth generation (AU/BA/BF) Falcon was in its twilight, with the new FG model still 12 months away. So FPV had no new product announcements until 2008.

With the aim of getting things back on track for the FG Falcon’s arrival, the decision was made to transition Rod Barrett, the successful and well-liked commercial director of the Prodrive-owned Ford Performance Racing (FPR) V8 Supercar team, into the role of general manager for FPV.

With a blue-chip CV, including senior marketing roles with Coca-Cola, Fosters and Dairy Farmers, Barrett was also a talented racer, enjoying success in Europe before hanging up his helmet and using his professional skills to move into motorsport management and promotion. To inject some excitement into its offering prior to the FG Falcon’s arrival, Barrett followed time honoured Blue Oval tradition by introducing a limited edition Cobra GT powered by a 302kW/540Nm version of the 5.4-litre V8 and nipping at the heels of HSV’s 307kW LS2-powered, E Series Clubbie. Launched at the ’07 Bathurst 1000 (where Ford swept the podium), production was limited to 400 sedans and 100 utes.

The main event, though, was the FG Falcon, and from its launch in early ’08 the new car was met with widespread acclaim. FPV’s FG-based line-up followed almost immediately, but as the motoring media and eager owners started to get their backsides behind the wheel of the new F6, GS and GT model derivatives, the response wasn’t quite so positive.

The suspension tune, in particular, came in for special criticisms, with a ponderous, bobbing front end that never felt as sharp, stable or settled as the VE Commodore-based HSV competition.

Power down was also an issue, with the now 315kW/551Nm GT struggling for traction at step-off, thanks largely to relatively skinny 245/35 19-inch rubber. The brakes struggled under pressure and the FPVs also suffered from broader FG ergonomic shortcomings, like a high driver’s seat and low steering wheel.

With the FG Series not getting off to a flying start, FPV diversified by focusing on the Territory. Based on the just-introduced turbo six version of Ford's local SUV, the FPV F6X produced 270kW/550Nm but was ultimately a flop, with just over 200 units sold. By late 2010 the Falcon had begun its huge sales swan dive. Large cars were definitely on the nose, and in parallel, the gloss was rapidly coming off the FPV badge. But FPV had big news designed to turn things around – Miami.

This locally conceived and executed project took Ford’s 5.0-litre ‘Coyote’ V8, added a 1.9-litre, twin-screw Eaton blower and slotted it into the nose of the FG Series FPVs. The result was a supercharged engine producing 315kW/545Nm for the GS, and 335kW/570Nm for the GT; although those numbers are widely thought to be conservative (with insurance rating management in mind).

In mid-2011, FPV displayed a GT ‘Black’ concept, featuring re-tuned suspension, bigger brakes, an aggressive aero package and, crucially, staggered 19-inch forged alloys, shod with fatter 275/35 rubber at the rear, and Dunlop SP Sportmaxx GT all 'round. FPV wanted to capture feedback at the show, with production obviously in mind. It looked like the answer to all the car’s shortcomings had arrived.

Within a month, the ‘Black’ entered production, but as a limited edition build of 125 units only. And the kicker was, the only thing carried over from the concept car was the black paint and graphics package. No ‘track tuned’ suspension, no brake upgrades, no body mods, and standard GT tyres. 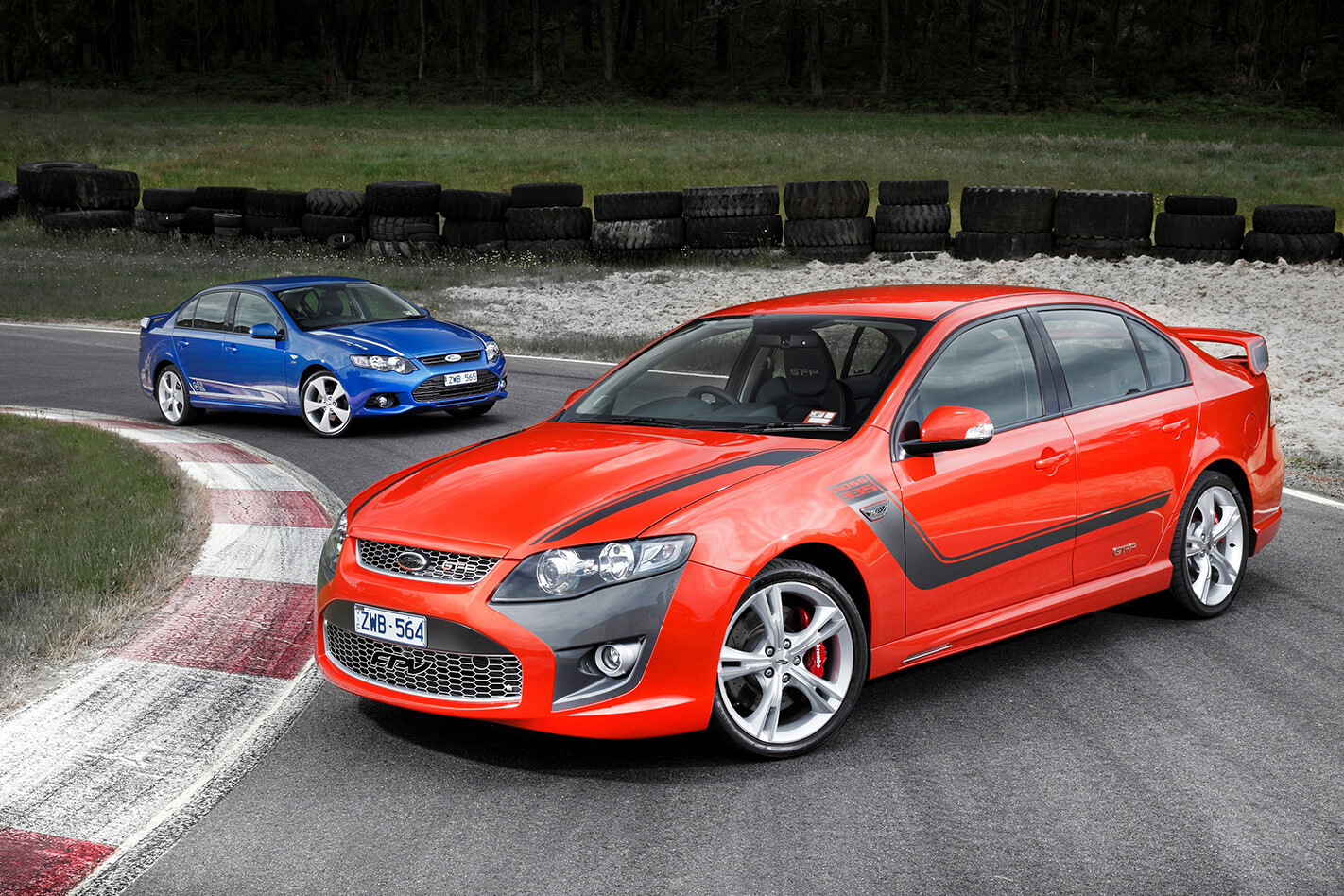 Things weren’t improving for FPV, and a year later, Prodrive and Ford again pulled out the razor to slash 13 jobs from the FPV headcount, including Barrett’s.

New Ford Australia MD, Bob Graziano, issued a statement at the time, saying, “We recognise the passion and dedication of FPV enthusiasts and their desire to see Ford high-performance vehicles available in the market”. He added, “Although this segment is relatively niche, it is an important part of Ford’s performance history and DNA”. Soon enough, Graziano would eat those words.

Replacing Barrett, Prodrive’s regional chief, Bryan Mears took over as FPV MD. He was immediately on the front foot. “The good news is that FPV is set for stronger sales this year than last, and we have some very exciting new products to talk about later in the year.” 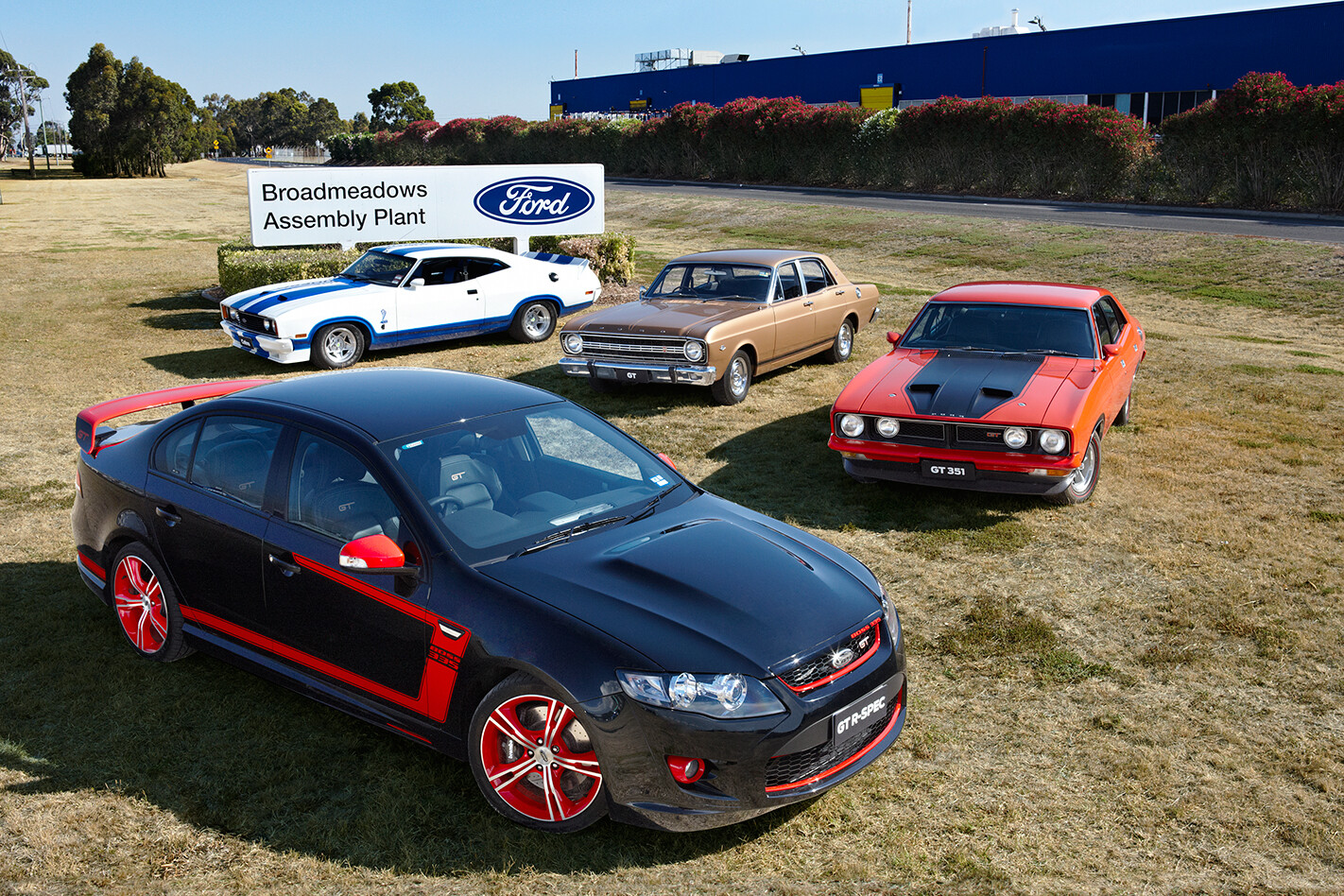 That exciting new product emerged in late 2012 as the GT R-Spec. Complete with classic C-stripe graphics, the new model picked up all the hardware and engineering upgrades the GT had desperately needed since its launch.

With launch control added, the FPV GT R-Spec became the fastest Australian sedan ever built to manage 0-100km/h in the mid fours, the Miami engine at last able to put its prodigious outputs to good use.

In early 2013, FPV production was shifted into the main Broadmeadows plant, but it was another Bob Graziano statement, less than three months later, on May 23, 2013 that put the final nail in FPV’s coffin – Ford’s decision to cease manufacturing the Falcon in Australia, and retire the nameplate, as of 2016. Despite flirtations with non-Falcon products like the F6X, FPV had firmly nailed its colours to the Falcon mast. From an engineering point-of-view, the GT R-Spec arrived too late to make a meaningful difference to FPV’s fortunes. And as our head-to-head comparison (MOTOR January, 2014) between it and HSV’s Gen F GTS showed, its time at the top would have been limited, anyway.

Speaking to Rod Barrett, now a senior executive with BP Australia, on news of the closure, he told MOTOR, “Personally, I’m disappointed FPV is going. I gave my heart and soul to FPV, and it became part of my DNA. But professionally I’m not surprised”.

He added, “I’ve experienced the passion among FPV fans and owners. I feel more for them, because it’s like their favourite football team or pop singer has just been taken away. If you check the forums, people are really hurting.”

Issuing FPV’s final send off, Ford’s then-VP of marketing, sales and service (and now CEO), Graeme Whickman said, “We appreciate all of the great team members, dealers, customers and fans who have supported FPV through its history.” 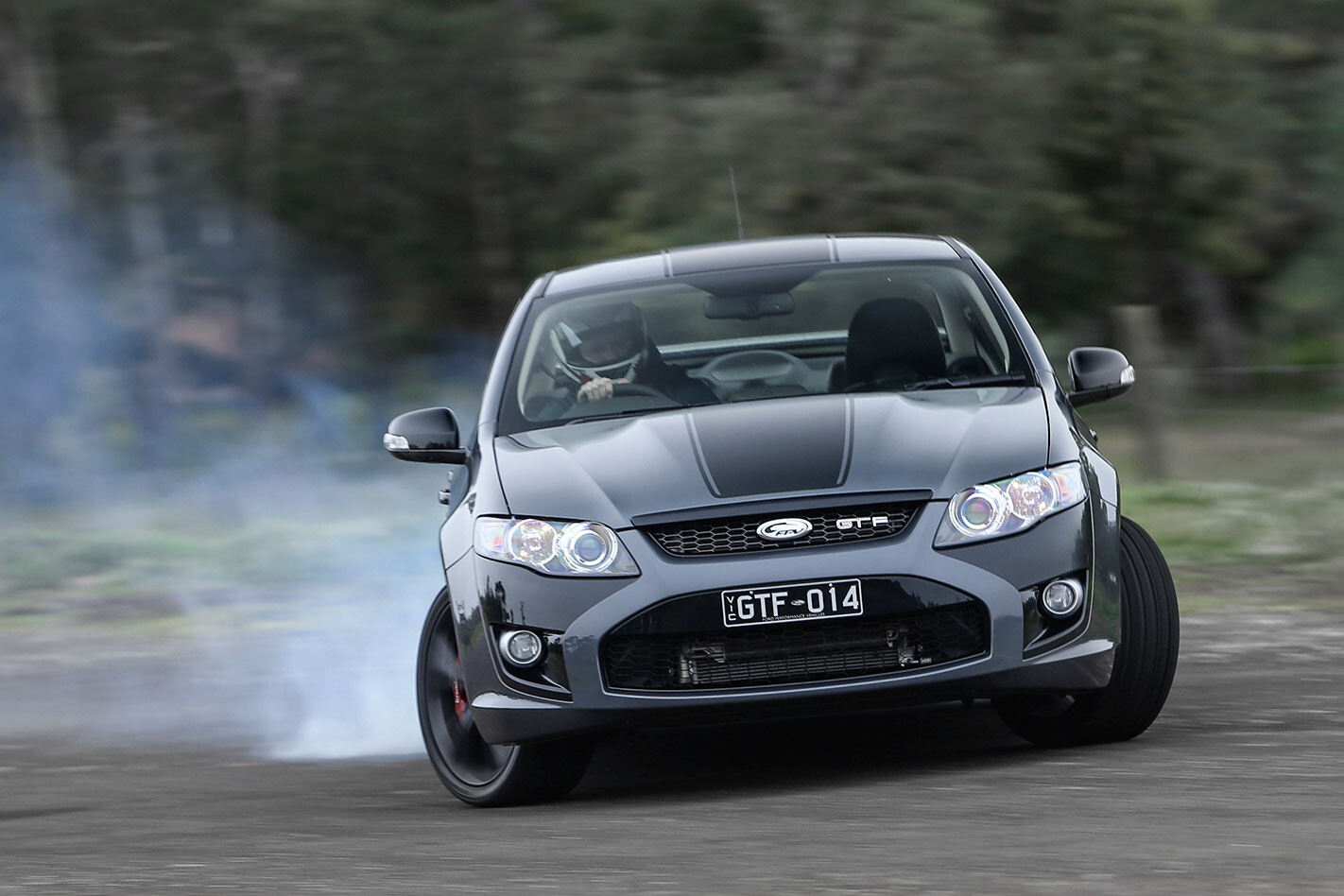 FPV's final act was the 351kW/570Nm FPV GT-F (F for Final). However, Ford finally came clean about the Miami engine's 'transient overboost' function, which under the right conditions boosted power to well over 400kW.

Thankfully, this was no cynical badge engineering exercise, with the small but passionate GT-F engineering team throwing everything they had at this last hurrah, the car gaining all the R-Spec chassis, wheel and tyre upgrades. This made it not only the fastest but also the sharpest and best-handling FPV ever made.

With just 550 built (500 for Australia, 50 for New Zealand), the GT-F became an instant collectable, with cars changing hands for twice its recommended $77,900. It was a fitting farewell to a brand that had become a unique part of the Australian performance car landscape.

This feature first appeared in the February 2014 issue of MOTOR.