WHAT'S going on here? Has the world stopped spinning and suddenly up is down and left is right?

This feature was first published in MOTOR magazine November 2008

Something’s gotta be askew. Lamborghini has just revealed a four-door sedan that it reckons will become its best-selling model by the time it (possibly) hits public streets in 2012.

Ever since it ploughed its way out of the tractor business, the Italian company has – apart from a blip on the radar with the LM four-wheel drive of the 1980s – remained one of the most pure sports-car brands of all time. Its raging-bull badge has been a sign of selfish speed machines that were uncompromised by forces, apart from aerodynamics and how much engine you could stuff in the back.

That was until this month at the 2008 Paris Motor Show, when it pulled the covers off the front-engined Estoque concept car and predicted that a sedan – even a ‘super sports sedan’ at that – will not only become its sales leader, but overtake a raft of similar hi-po four-doors from its prime rivals.

By the time (or if) the Estoque hits the autostradas, its niche segment will be relatively crowded as Porsche’s Panamera and Aston Martin’s Rapide will have already joined the pioneering Maserati Quattroporte.

But arriving fashionably late to the four-door festival doesn’t phase the folks at Sant’ Agata as Lamborghini suggests that the Estoque will be, of course, in a different league (as any PR department would). “It is not a high-performance version of an existing vehicle, and it is not a Lamborghini body on somebody else’s platform, either. 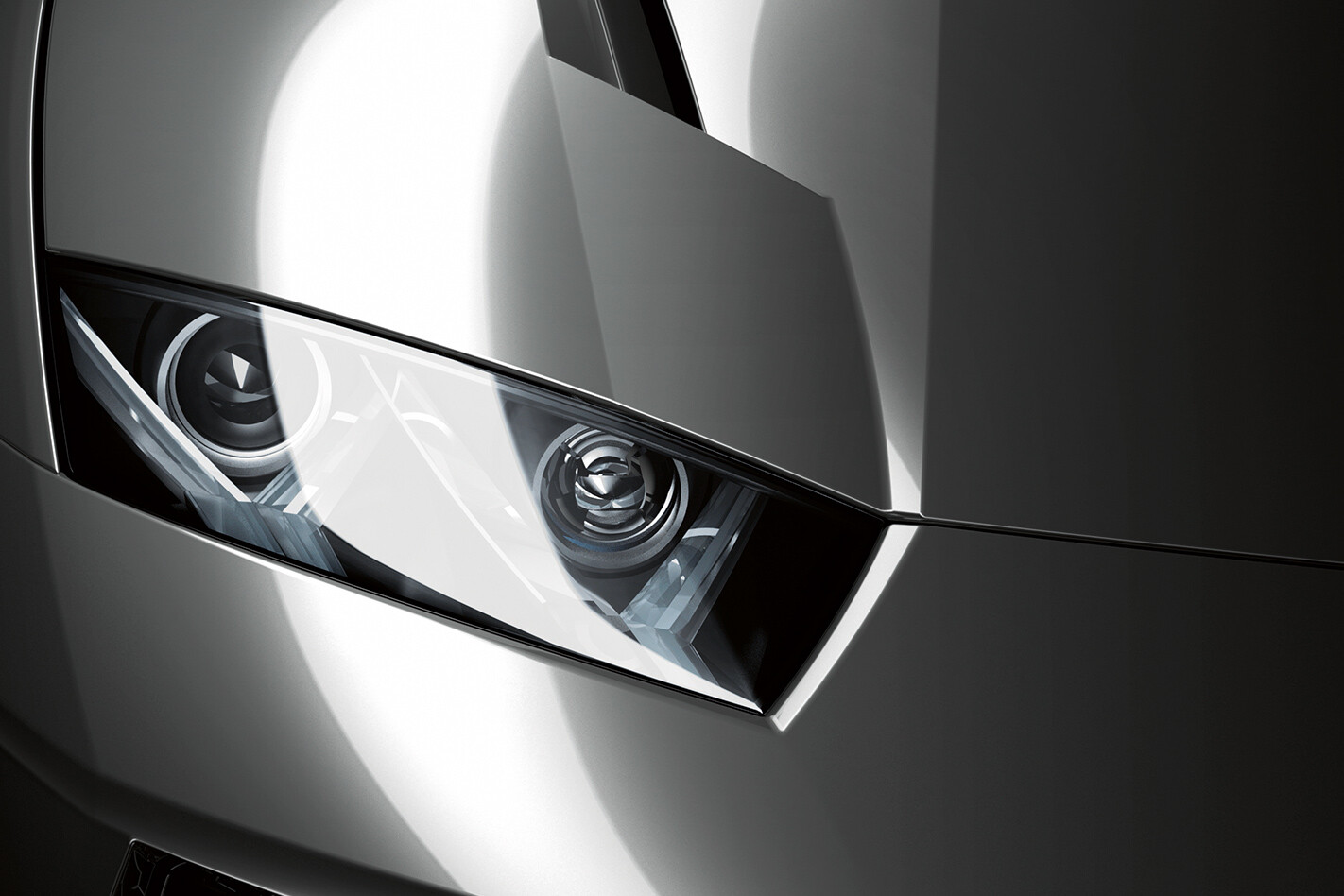 What we created is a unique technology package that combines accommodation for four with the style and performance of a dyed-in-the-wool sports car,” claims Manfred Fitzgerald, Lamborghini’s head of Brand and Design.

How this will be executed is yet to be determined, but the Parisian debut was the first step in the approval process, where reaction was gauged to the concept itself and whether the Estoque should be manufactured at all. In its favour is a volatile world market and a need to strengthen Lamborghini’s line-up.

“In the first six months of 2008, revenue is up 9.6 percent, and profits have soared by 32.5 percent,” explains the extrovert Lambo MD, Stephan Winkelmann.

“But let’s not kid ourselves. These are now truly tough times, and the business is quite volatile, so three legs are invariably better to stand on than two.” Lamborghini looked at a number of options for its ‘third leg’, including a Miura successor (remember the 2006 design exercise?), an LM reincarnation and a front-engined GT. The four-door ‘Supersportwagen’ eventually got the nod. 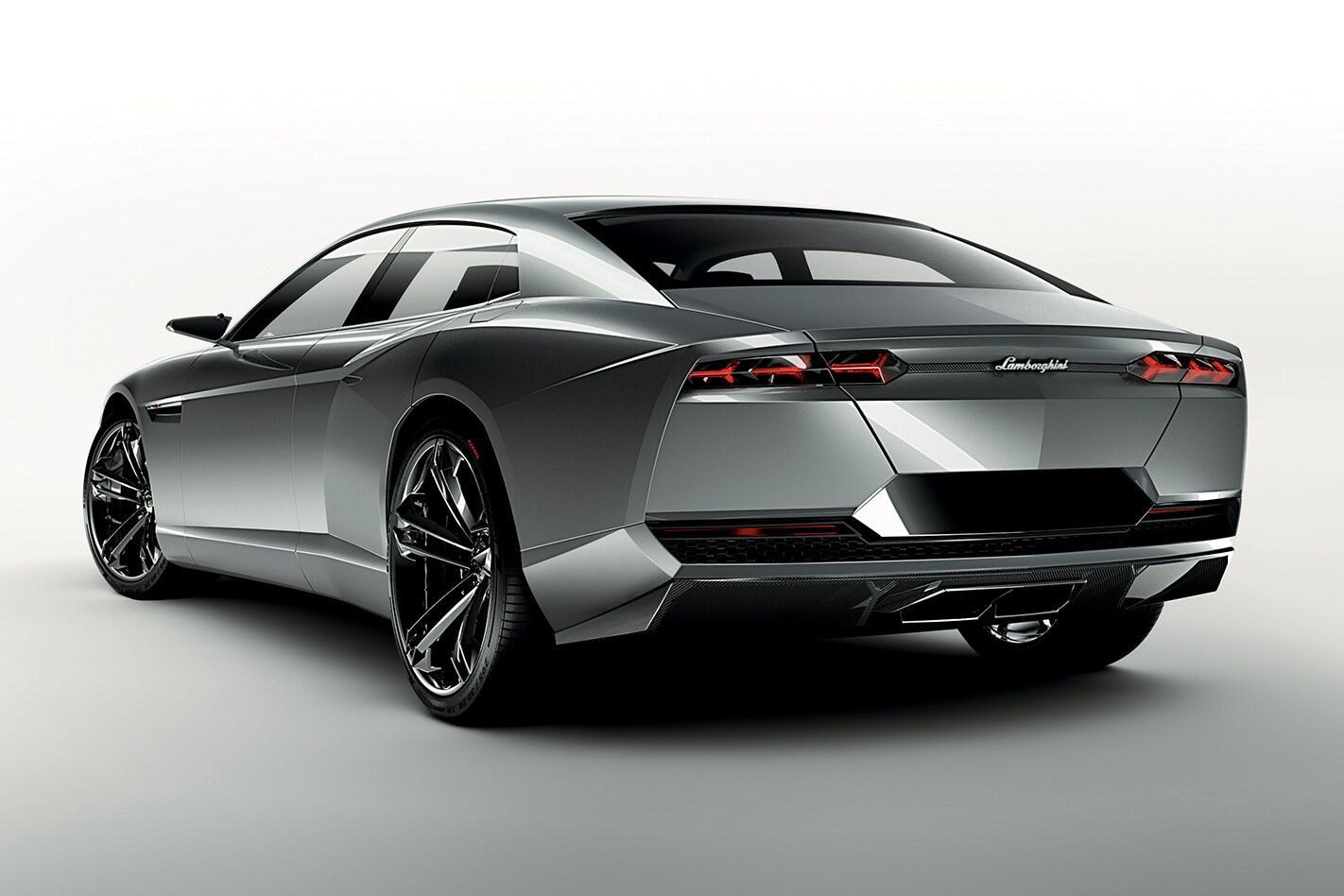 “Research tells us that it would work in all markets – especially in Asia and Russia, which will soon account for one third of our total sales volume,” Winkelmann adds. “Perhaps most important is the fact that it addresses a very wide customer base, from sports-car addicts with a family to the style-conscious businessman with a full-time chauffeur.

To satisfy these clients, who are used to the space, comfort and convenience of a full-size luxury sedan, we generated a truly generous package free of head and legroom compromises.” The provisional numbers support these claims.

Overtones of the million-dollar Reventon are evident in its design, despite the Estoque’s unique front and rear ends, while the 23-inch rear and 22-inch front wheels sit inside muscular wheelarches for an aggressive, yet elegant overall aesthetic. And Lambo is quick to claim such dimensions prove the Estoque is a cohesive ground-up package and not an ad-hoc, rushed-to-the-market four-door. “Entry and egress will be totally effortless,” promises Lambo’s technical boss, Mauricio Reggiani. “The big doors open wide, the seats are cushy yet supportive, there is plenty of legroom… Although visibility is excellent, the first thing you will notice from inside is the high beltline which provides a charming, cocooning effect.”

The Estoque’s generous dimensions are likely to be derived from Audi’s ASF (Aluminium Space Frame) technology – the most pragmatic choice in terms of investment, weight saving and modularity.

Although the Italians are determined to keep the weight of their new baby as close to the 1600kg mark as possible, complying with all the latest safety standards (pedestrian protection, five-star NCAP, 2015 side impact) is bound to add some weight. Active aerodynamics may also add a few extra calories.

Since the bad-boy front end is not exactly of the low-drag kind, the wind tunnel specialists are experimenting with a ground effect-bumper and flow-through wheel housings. In the rear, motorised venturi-effect aprons are expected to reduce high-speed lift and contributing to that suction-cup effect is the virtually flat bellypan. Despite an aluminium chassis, conventional steel suspension with magnetic ride (as opposed to an air arrangement) has been tipped for Estoque, even though the platform can house a more sophisticated air arrangement. “With this car, we won’t focus on maximum speed,” Fitzgerald admits.

“Performance against the stopwatch, in general, is not a prime parameter.” And as Bentley already installs the industry’s largest-diameter (400mm) rotors in the Continental GT, the notably lighter Estoque will almost certainly get the same braking set-up, of course with optional carbon-ceramic discs.

While the front-midship engine position is a given, Lamborghini is reportedly considering options such as hybrid and diesel power. In reality, however, the choice will likely be Audi’s upcoming twin-turbo V8. To be on the safe side, though, the engine bay is just about big enough to swallow the Gallardo’s V10, though the ten is a thirsty and not particularly green engine, and an expensive one to boot.

Whether the V8 will actually be derived from the V10, as has been the case for the concept car, is not yet clear. More likely and a lot more affordable is a bespoke variation of EA824 which denotes the new 4.0-litre direct-injection twin-turbo V8 Audi has earmarked for the next A8. 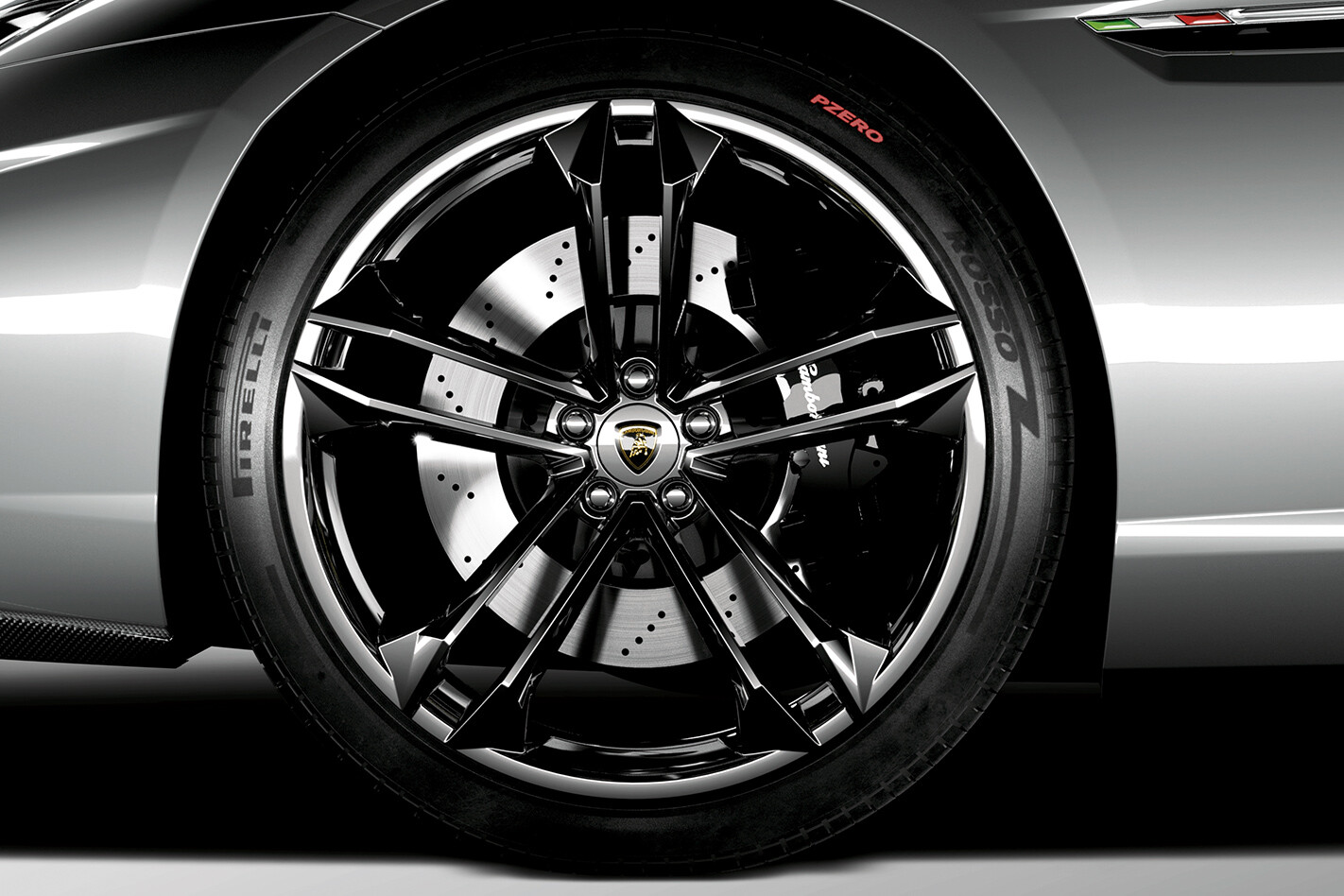 Rated at 313kW and 550Nm (in A8 guise), it would probably get an increase to 373kW and 650Nm for the Estoque. Since the next S8 features an even brawnier 462kW version of Lamborghini’s own V10, it is easy to understand why the newcomer from Sant’ Agata cannot put all its money on performance alone.

What it should feature, instead, is a standard hybrid module that would be incorporated in the DL750 seven-speed dual-clutch transmission to provide a 26kW power boost and to feed the auxiliary equipment. Reggiani says a 55/45 weight balance is perfectly achievable.

“Instead of the fixed torque split preferred by Audi, I would vote for an active, electronically controlled on-demand system that is even more responsive and progressive. The set-up could, for instance, include an open zero-friction centre differential.”

The show-car’s flamboyant yet functional cockpit with its switchable multi-graphic digital display mimics the Reventon, while the stylish leather trimming shouts Italiania, and the ambience is a compelling mix between lounge-spacious and separée-intimate. There is no wood and no chrome but, instead, handcrafted grey and white hide. 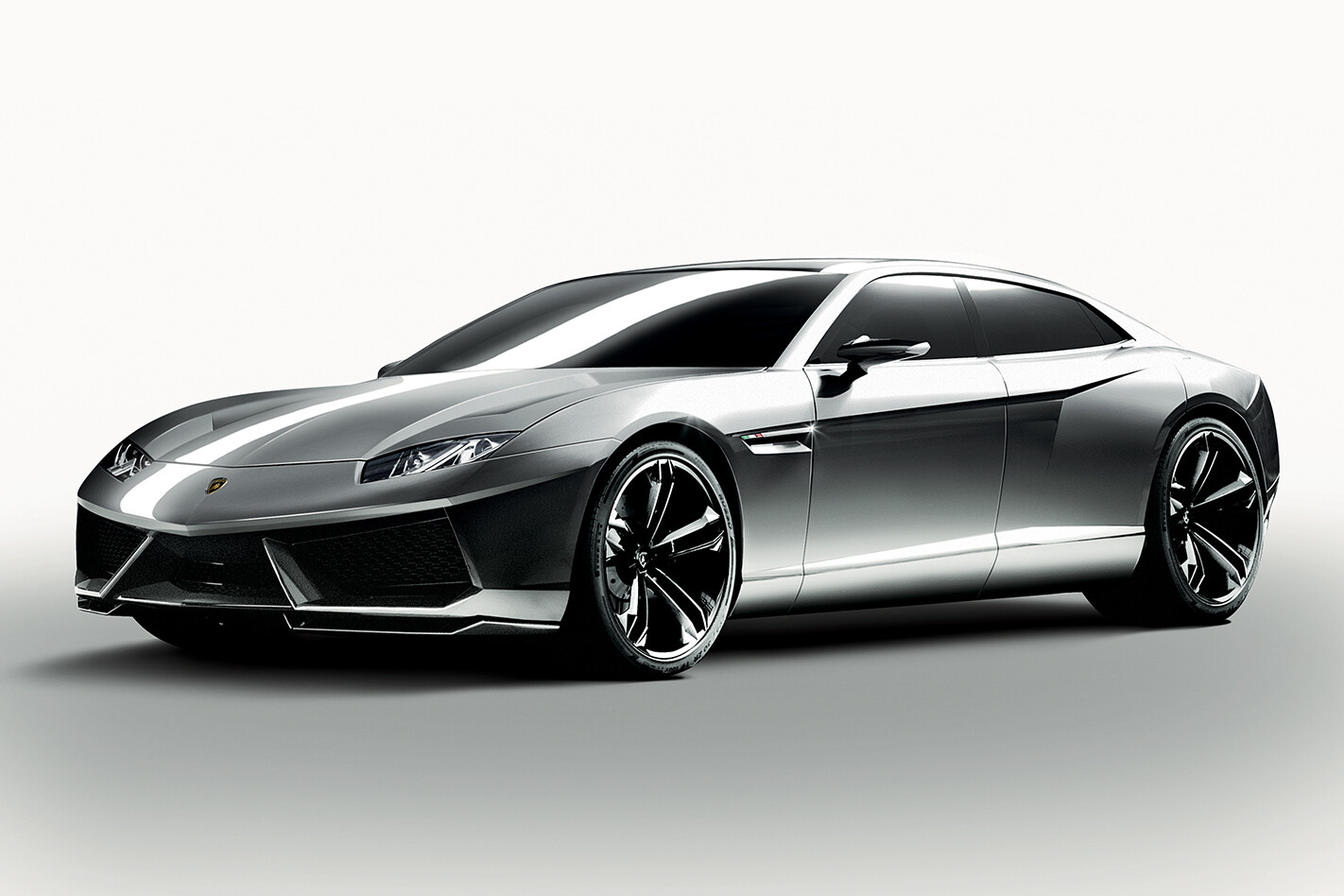 Regardless of the public reaction at Paris, the Estoque still faces hurdles. Like, where will it be made? There’s not enough room in Sant’ Agata, where the only 100-percent in-house Lambo – the Murciélago – is built. So, alongside Gallardo in Audi’s Neckarsulm plant, perhaps?

As it happens, Estoque is loosely based on the ASF platform it would share with the next Audi A8 and the follow-up to the Bentley Continental GT/GTC/Flying Spur. Thanks to the Audi/Bentley connection, the small sports-car maker could offload a significant portion of the development and purchasing costs, sources say, which may be crucial in determining the Estoque’s price – and future.

Only time will tell if Lamborghini can leap over these internal hurdles, and if the sheiks and celebs of the world are prepared to stump-up for a four-door supercar. But, until then, can we get the world turning in the right direction again? We can’t handle this head-spin!