People tow goats all the time, but when someone does it in a Lamborghini raging bull, we sit up and take notice

As the story goes, in 1932 an Australian farmer’s wife wrote to Ford asking for a vehicle that would be equally suitable for going to church on Sundays as it would taking the pigs to market on Monday. Ford customer service clearly went the extra mile back then, because two years later the car-based utility was born.

The ute has changed much since then, with the present-day HSV Maloo GTS being the ultimate evolution of the hybrid work vehicle/passenger car. If you need to expedite a pig or two to your local abattoir – and don’t want to crease your Sunday best while you do it - nothing will get the job done faster.

Except, perhaps, for a Lamborghini Murcielago fitted with a towbar.

That’s right. While some Tweeters and Instagrammers yelled “fake!” at our snap of a trailer-towing Lambo, that very car has been captured again – this time on video thanks to Youtube user Joseph Criniti. All of you doubting Thomases can sit down now. 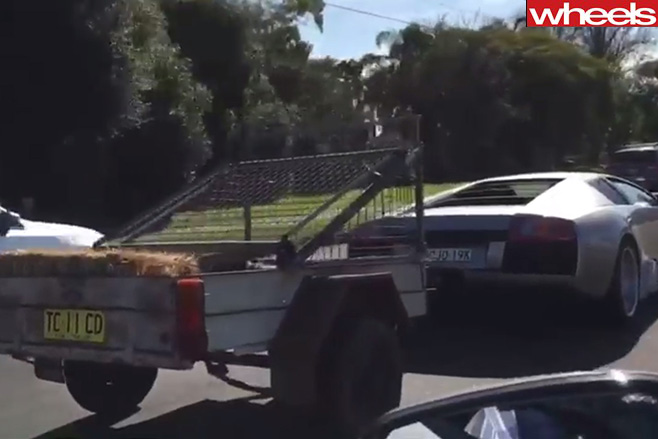 This time with a pair of remarkably calm goats in the back, this enterprising Australian was spotted in New South Wales on his way to… a goat show? A car show? Both?

It’s not the most obvious choice in farm transport, but we’ll give him points for thinking outside of the box.

While we’re at it, this video also raises some pretty pertinent questions, such as:

Where does one acquire a towbar for a Murcielago?

Why would they choose a Murcielago as a tow vehicle in the first place?

Why are those goats so docile when the sound of a 426kW V12 is just a metre and a half in front of them?

These are all good questions and while we don’t have the answers, we do have this video.