There is no greater weight than that of expectation, and it was one that fell heavily around the shoulders of those involved in the new ND Mazda MX-5.

Engineers, designers, marketers, everyone working on the fourth-generation of Mazda’s iconic roadster knew that if they got it right it’d be the highlight of their CV, but stuff it up and they’d never be forgotten, for all the wrong reasons.

Of course, it’s slightly ironic that the MX-5 should become an icon in the first place, given the original was shamelessly derivative of 1960s British roadsters. Bob Hall’s idea of reviving simple, back-to-basics motoring was an inspired one, but the concept itself – lightweight, rear-drive, revvy four-cylinder engine – was well-established by cars like the MGB, Austin-Healey Sprite and Triumph Spitfire. 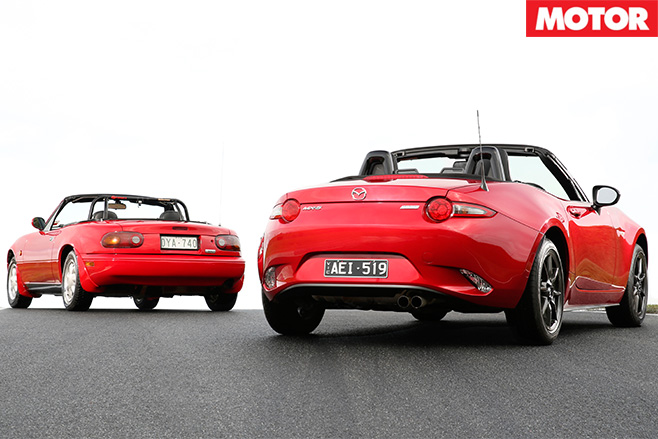 Adding to the pressure was the fact Mazda had to find a new path. Over 25 years and three generations, the MX-5’s weight had increased by 20 per cent as the demands of more performance, more space and more equipment diluted the lightweight focus of the original NA. To reverse the trend, Mazda had to be clever, and brave.

As a result, the ND MX-5 is the only car in recent memory that is significantly smaller than the model it replaces – it looks like it’s been shrunk in the wash. The first clue as to its diminutive size is the fact that 16-inch wheels aren’t completely lost in its flared arches.

Parked side-by-side, ND and NA look virtually identical in size, but it’s no clever design trick; the newer car is actually 33mm shorter and only 1mm taller, though 59mm of extra width and a 44mm longer wheelbase means the ND has the larger footprint.

Each successive generation of MX-5 has become progressively ‘happier’ in its front-end styling, with the cheerfully content NA morphing into the NC’s almost demonic grin. With its narrowed ‘eyes’ and sharper lines, the ND has an air of mischief about it; likewise, the rear is much more angular – Mazda refers to it as a more “feline” design – than Nicholas Bodey’s NA. 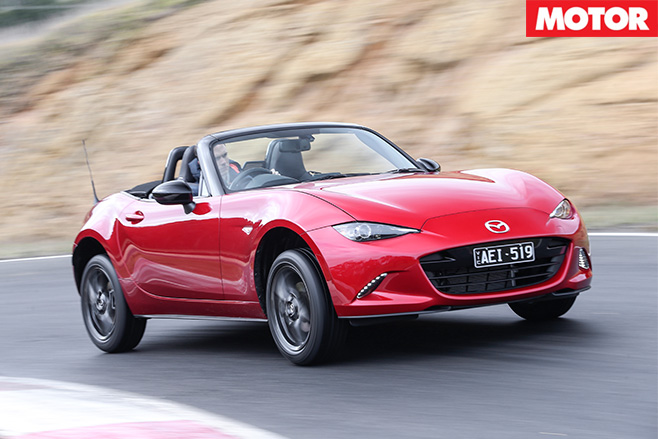 It’s fair to say that the new MX-5’s styling hasn’t met with universal acclaim, however. Cliché though it is, it does look better in the metal, though we can see lowered springs being a popular modification to reduce the substantial gap between tyre and wheelarch. Modifying MX-5s has been a popular pastime since the model was introduced in 1989 – and one that’s unlikely to cease with the ND – but Bodey’s NA is stock as a rock.

Despite showing over 200,000km on the clock, Bodey’s MX-5 is a very tidy example without being a pristine show car. It’s a very early build, believed to be the 38th Australian-delivered car, and was bought as 17-year-old Bodey’s first car following advice from a friend of his father’s. The MX-5 was chosen as a car with collectible appeal, unlikely to depreciate and wouldn’t attract too much unwanted attention, boxes that the NA undoubtedly ticks.

Mazda’s stated aim with the ND MX-5 is to recapture some of magic of the original, so it seems appropriate to start in the NA to establish a benchmark. Having never driven an original MX-5, I’m not quite sure what to expect; the car’s massive following suggests it’s something quite special, however there are dissenting opinions – I was once put off buying an NA MX-5 thanks to someone informing me they could be out-dragged by a Toyota Landcruiser. 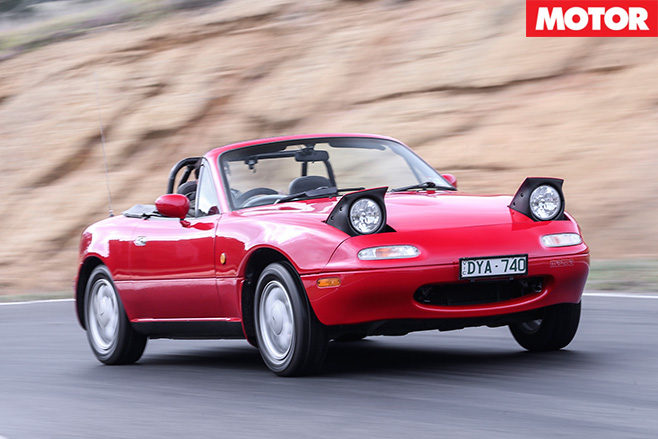 With a paltry 85kW/135Nm from its 1.6-litre four-cylinder, the NA MX-5 certainly isn’t going to blow anyone away with its straight-line speed unless they’re more accustomed to being pulled by oxen. It is, however, very responsive and sends a lovely vibration buzzing through the car. Being so down on power – or, more accurately, torque – more throttle doesn’t equal more acceleration, and power oversteer fans are going to need to look elsewhere.

Though a little extra urge would be welcome, this little 1.6 does suit the character of the car, and keeping it singing is no chore thanks to a superb five-speed manual gearbox, the short gate and tiny stub of a lever meaning gearchanges are a quick and accurate affair.

The ND’s six-speed manual is similarly slick, longer in throw but light and easy to use. It doesn’t quite possess Porsche levels of precision but it’s one of the better manual shifts around. Ratios seem well chosen, too, making the most of the relatively meagre 96kW/150Nm. 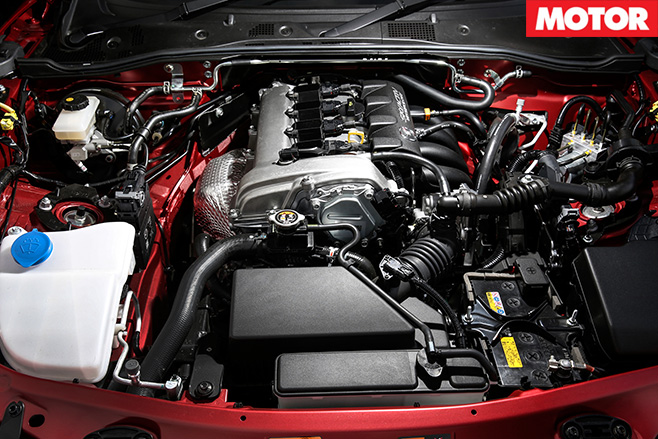 The 118kW/200Nm 2.0-litre MX-5 is the more potent performer, however fears the 1.5 would turn out to be mobile chicane prove unfounded. Yes, it’s no powerhouse – it makes a Toyota 86 feel pokey – but it’s keenly enthusiastic all the way to its 7500rpm cutout and much more refined than its predecessors.

Sadly, though, while the engine sounds sporty enough, it’s not as rorty as the 2.0-litre found in the NC, let alone the NA’s 1.6 – this is one instance when a little extra NVH would have been welcome.

Around the tight confines of Bryant Park hillclimb circuit it feels pokier than you'd expect, though on the wider expanses of the open road it can occasionally struggle on long inclines. The reason Mazda’s new roadster can get away with such a tiny powerplant is the hefty diet it’s been subjected to. 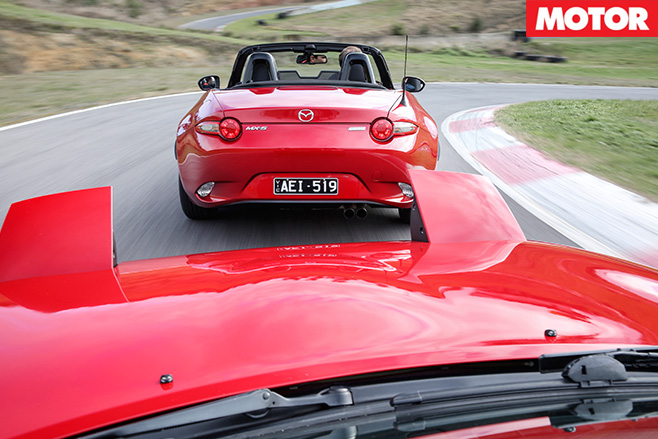 Compared to the outgoing NC Hardtop, the new car has dropped an incredible 158kg. While that’s not a like-for-like comparison, the new 2.0-litre is only 25kg heavier, so regardless of spec at least 100kg has been saved, despite more equipment and greater crash safety.

The majority of the weight drop has come from the mechanicals; obviously, building a smaller car helps, but increasing the use of aluminium and high-tensile steel saved 20kg from the chassis, the diff and gearbox shed seven kilograms each and 12kg came out of the suspension.

The greatest thing about saving weight is you end up in a virtuous circle; less weight means smaller brakes and wheels/tyres are needed, which saves further kilograms, so you can use a smaller engine, which needs smaller driveshafts and the like. You get the feeling the likes of Colin Chapman and Gordon Murray would approve of Mazda’s engineering approach. 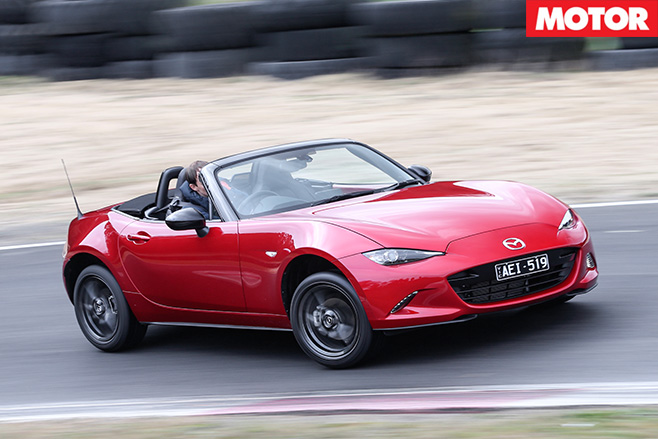 The diet has done wonders for the MX-5’s handling abilities. Simply put, the ND is a riot in corners, with a spectacular level of adjustability. Part of this is down to its modest grip levels – you’re in corners for so long, you have the opportunity to adjust your line a few times – and the rest is due to the new MX-5’s soft suspension setup, which exaggerates weight transfer and allows you to play with the balance at will.

Trail the brakes or lift sharply mid-corner and the rear will edge wide, at which point a healthy dose of throttle will hold the tail sideways – yes, you can drift the MX-5 with only a 1.5-litre engine. Depending on the corner, it’s actually easier in the dry: in the wet the MX-5’s softness can make it a little imprecise when sliding, whereas on a dry road you can nudge the front end into understeer which smoothly transitions into oversteer. 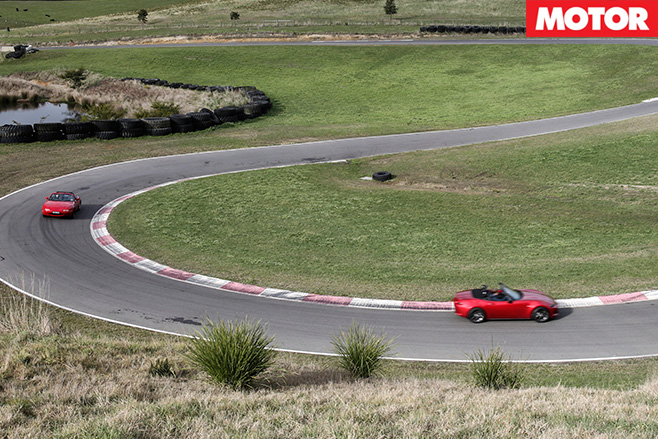 It’s hilarious fun and I complete many more laps than the attending Mazda PR probably wishes driving like a hoon. The steering is light and accurate, though it could provide a little more feedback with lock applied.

Such modest grip levels also mean anyone accustomed to modern performance cars will need to readjust their expectations before committing to their first corner in anger, though the presence of ESP for the first time should help mop up any errors. It must be said that Bryant Park flatters the MX-5 – in fact, it could’ve been made for this track – but even at Winton it remains a spectacular amount of fun.

There’s no doubt the ND is a massive step forward in terms of enjoyment. A Bilstein-equipped NC MX-5 25th Anniversary is also present on the day but feels dull, inert and understeery in comparison, though it almost certainly would be the faster car in terms of outright speed. 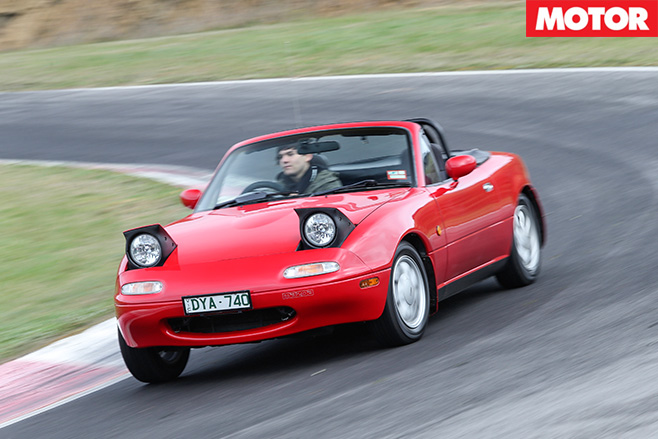 The question is: has it recaptured the feel of the original? It’s a difficult question to answer, as cars have moved a long way in 26 years. The biggest difference is apparent the moment you turn the steering wheel, as while it’s quite light around the straight-ahead, the NA’s steering weights up substantially with lock applied, to the point that applying quick corrections would require both precision and muscle.

Still, you’re unlikely ever to need too much correction, as even on 185/60 R14 rubber the NA MX-5 possesses more grip than grunt. Overdrive the car and it lapses into gentle understeer, but with a little restraint it digs in and really works the tyres, even moving the rear slightly if the road is appropriately cambered, though it’s more of a wiggle than a slide. 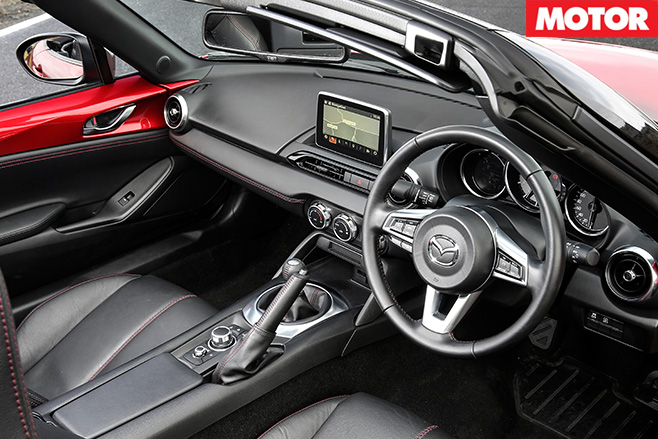 The driver sits extremely low, and the driving position is good, which is just as well as the wheel is not adjustable. The ND improves on this with rake adjustment, though reach is a strange omission and would be beneficial to allow the steering wheel to move a bit closer. However, the interior is one area Mazda had no intention of replicating the NA’s bare-bones simplicity.

Towards the end of its 11-year lifespan, the NC’s interior was a stark reminder of its age, with little in the way of connectivity or gadgetry. Our Roadster GT test car comes equipped with heated leather front seats, climate control, auto headlights and wipers, nine-speaker Bose stereo, seven-inch touch screen display with sat-nav, Bluetooth phone and audio and internet radio capability, all for $37,990, almost $10K less than the previous NC. 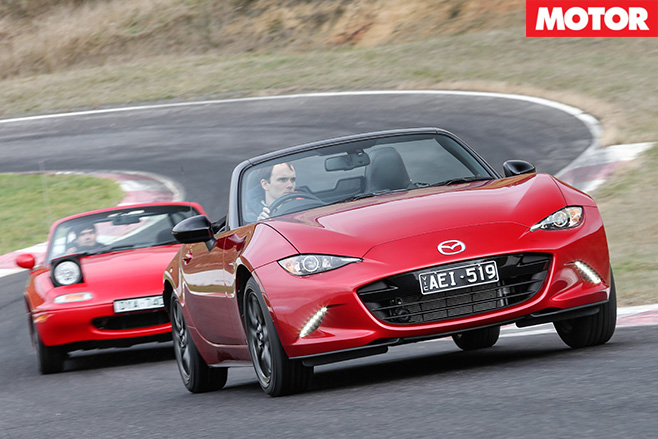 With the price having undergone a similar diet to the mechanical package, the driving thrills of the MX-5 are more attainable than ever, but even more importantly, those thrills are of a higher quality than ever. Expectation may have initially been a burden for the hard-working development team, but it’s driven them to create something truly excellent, a car worthy of the MX-5’s reputation as a true driver’s car.