Opinion: Some drivers are not meant to be on the road

Do you ever wonder if maybe some people should just never drive or leave their homes? Do you sometimes see them doing stuff that makes you wonder how anybody could be so obviously brain-dead and yet still operate complex machinery? Like a spoon? Lord, I do. All the time.

And I wondered about it this very morning as I walked back to the Melbourne Bloke Centre from the coffee shop (okay, the closest servo, but hey, at a buck a cup we can’t all be rocking a short-back-and-sides and riding a fixie, can we?). Anyways, I like to play Guess That Engine as cars zoom up behind me, and I’m getting pretty good at it. An old Magna can be heard rattling its timing chain from three blocks away.

A Toyota V8 diesel through an aftermarket pipe is a common one around the MBC. A fart played backwards? That’ll be a WRX. And a Holden 253 thong-slapper, well, the name tells you all you need to know.

MOTOR opinion: How to avoid road rage situations... sort of

But today, I heard what sounded like Rolf Harris heading my way. No, not the lock-’em-up bang of a gavel falling, more like a wobbleboard at redline. And as the car in question, a late-ish model Mitsu Lancer (I can’t be more year-specific since they’ve been making the same car for about the last 40 years), passed me I could plainly see what was causing the whoop-whoop-whoop racket: the right-rear tyre was flat.

Not low-on-air flat. Not flat-on-the-bottom flat. This was flatter than a shitcarter’s hat. The rubber was smoking and flopping all over the place, the whole car was shaking like a wet dog and the racket was something else. The only thing holding the ex-tyre on to the Lancer’s rim was the vacuum inside it, I reckon. 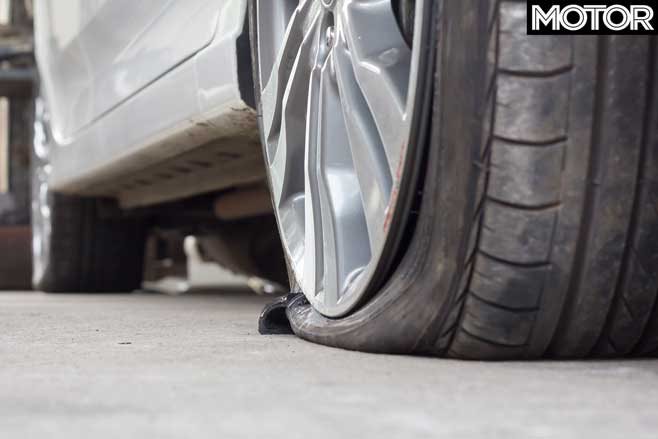 And I wondered to myself, ‘That must be steering and handling like a rudderless turd.’ Followed by, ‘How on Earth does the muppet at the helm not know that something is wrong with this picture? Nah, surely they know they’ve got a bit of an issue. Don’t they?’

Apparently not because, instead of moving towards the shoulder to pull up, the Lancer continued on its sozzled way at a constant 70 kays (in the fast lane of an 80km/h road, of course). Intrigued, I watched it continue continuing and when I lost sight of it, about a klik up the road, it was still hogging the right lane and still clinging grimly to 70km/h while one very second-hand Bob Jane Aussie All-Rounder did the same to its rim.

MOTOR opinion: The lies people tell about their driving habits

Now, I don’t know about you, but I’m of the belief that if you can’t feel a totally flat tyre on your car at speed, there are only two possible conclusions to be drawn. One, that you’re occupied doing something other than driving. Or two, that your mama smoked a lot of ice and drank a lot of cask wine when she was pregnant with you. Either way, you probably ought to get the hell off the road.

I don’t know, maybe the driver of this car was fed off lead plates. Maybe they were the local gynaecologist’s first ever crack at a forceps delivery. But I’ll put them in the same category as the geniuses who sit on a single-lane stretch of 100-kay road at 90 and then subconsciously speed up to 120 the instant they get to an overtaking lane. With me behind them.

I’ve been thinking of ways to equip my ute with a gun that fires deer slugs for the purpose of shooting their tyres out. But based on today’s episode, it wouldn’t make any difference.

Unfiltered and good for your health at MOTOR opinion