I know what you’re thinking… another hot Commodore. Think again, here’s an SS that will make your day.

Ever seen Russell ‘The Enforcer’ Ingall at the race track when his car is handling badly? You don't want to, it's not a pretty sight. He's like Dirty Harry with a migraine.

This article was originally published in the November 1999 issue of MOTOR.

And before you waltz into his garage and say “How's it going Rusty?” it's always better to ask yourself this question: “Is he on the front row, or back in the pack?” If he's mid-grid (hey, it happens) you're dust, punk.

Want to buy The Enforcer's SS? Find out more here!

The Enforcer's fame and fortune are based on his ability to extract maximum performance from his Castrol Perkins Racing VT. That means the fine art of fine tuning a 600hp, 1350kg projectile to go fast – 300km/h fast. 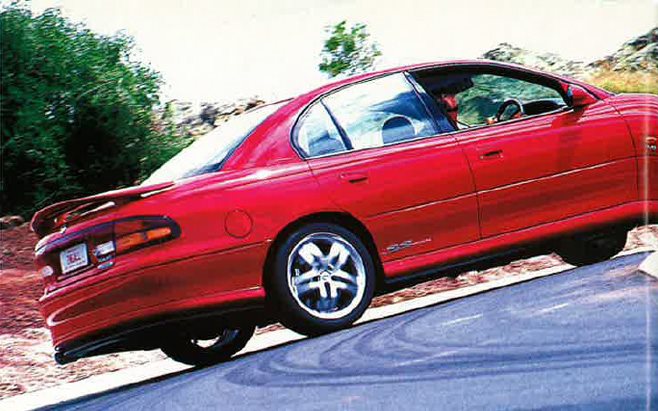 Within a handful of practice laps he must find a near-perfect race set-up, one that will protect his tyres, give him maximum 'power down', and the chassis balance to race on the edge of adhesion (and over it) lap after lap.

Any wonder when he picked up his shiny new VT SS road car he instinctively noticed shortcomings in its suspension, braking and engine performance. The stock VT's limits might be far higher than Joe Average's but they barely begin to tax Ingall's skill. Enter the Enforcer VT, his version of Holden's budget blaster.

"The stocker wasn't fast enough!" he laughs. "You jump out of a touring car to drive home at night and, no offence to the SS, you feel the difference. I drive home in my VT and feel like I'm in the 'office'." 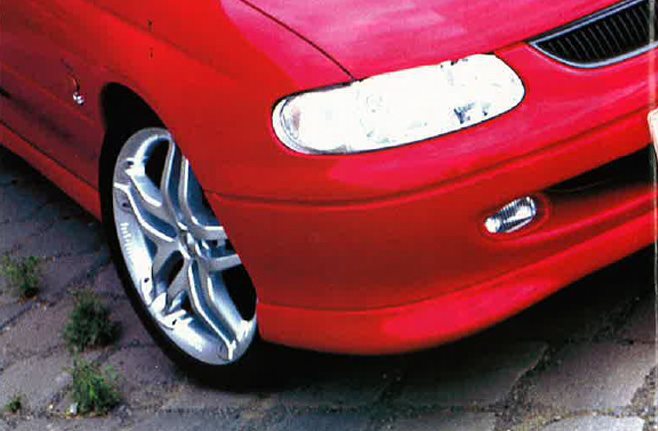 So, with a few well-chosen off-the-shelf options, he turned his stock VT SS into a car which handles, stops and steers more like a race car but still retains its road manners. And looks a lot hornier too.

When it comes to active safety, the most fundamental component is brakes and here lngall did not compromise. A peek through the massive 18 x 8.5-inch Momo rims reveals stoppers almost identical to those on his race car.

Pizza tray-sized Harrop Engineering discs (14-inch fronts, 13.5-inch rears), on specially machined Harrop hubs are vice-gripped by six piston AP callipers (four piston rears). With the fat contact patch provided by grippy 235 x 40 Dunlop W10s, the braking is breathtaking – literally. With such huge rear rotors, Ingall knew there would be too much braking at the rear and fitted an under bonnet bias adjuster. 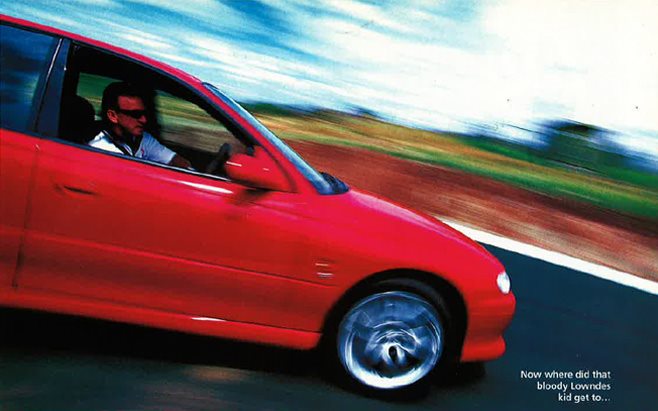 In the past he normally preferred to de-activate ABS on his road cars, relying instead on his ability to cadence brake. But, as he discovered in MOTOR's 100-0 km/h Correvit braking test, ABSdoes reduce stopping distances.

The Enforcer VT had barely turned a lap in anger when we strapped the Correvit on at Calder Park to compare it with a standard issue SS, and Ingall had not dialled in the right amount of bias. As a result his first full-blooded stop resulted in rear wheel lockup and cloud of blue smoke.

A fiddle with the bias knob and presto! the optimum balance between front and rear. His best stop sans ABS was 40 metres. Reactivating the anti-lockers cut that distance to 35. ABS is a must for Joe Average, says Ingall, who found fade after only two hard stops in the standard SS very unpleasant. 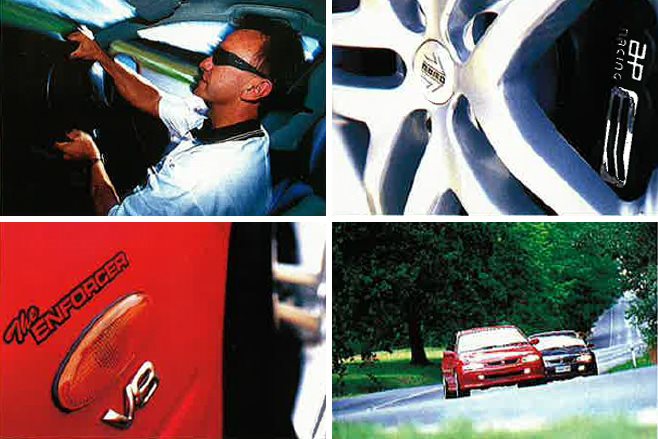 "After one and half laps in the standard car the brakes began to fade and the ABS wouldn't kick in - the car didn't even have enough braking to lock the wheels. The AP/Harrops will just go all day. "Pedal pressure is a lot less than on the standard car as well. People think when you put big brakes on pedal effort increases, but it's actually the reverse."

The Enforcer VT is lowered 42mm at the front and 30mm at the rear and retains some rake. That was deliberate, rake helps combat understeer.

"The rear of any car, including a race car, rolls more than the front, so you've got to jack it up and that gives you more steering, it puts more weight on the front. So I've kept a fair amount of rake and it makes the car very well balanced." 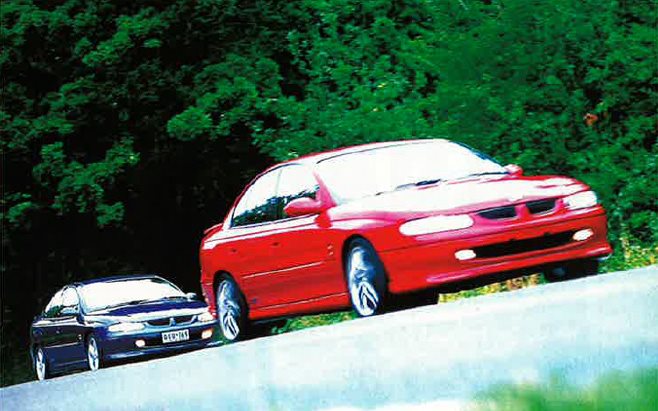 The only suspension components Ingall didn't toy with were shock absorbers. He reckons Holden has done a good job so why waste money. "The standard shock valving wasn't too bad. You can't, up to a point, say the manufacturers of these cars are dills; they spend millions of dollars on suspension development.

"Normally, when you put heavier springs in the shocks bounce a lot, because they can't control the spring. But the standard shocks are pretty good and have fairly heavy damping. It's a cost thing, too. If it doesn't need $800-1000 worth of shocks why put them in?" The right spring rates are the key to good handling, Ingall reckons.

"These King Springs are progressive rate, they don't hinder the ride too much because they are soft initially then go hard. As you lean into a corner the spring rate goes up and holds the car up. The balance is really nice. You can throw it into the corner and get the tail out if you want, or get all four tyres sliding and just use the power to steer it through. It's very controllable. I nearly speared off at turn one in the stocker. There's a massive difference." 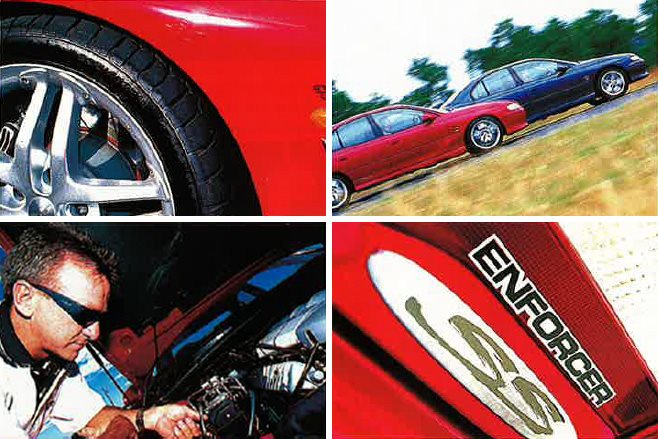 Another less noticeable tweak is the Pedders off-set bush kit for the rear end, a must when lowering an IRS-equipped car, lngall says, to maintain the right camber and toe-in, and improve tum in and tyre wear.

"Rear traction is easy to get, the front is harder. Because the SS has so much weight over the front, if you push it hard it will understeer. "This off-set kit is worth its weight in gold. I still run more neg, about one degree more on the rear than specified with standard toe-in and it's perfect."

The off-set of the Momos (which increase track 15 mm) and stiff sidewalls of the Dunlops also help stability and turn in. "But expensive tyres won't help if the car is rolling around and the suspension is not controlled," Ingall cautions.

"I relate it to a race car: you can have the grippiest tyres in the world, but if the car is not handling properly, you can't make use of it. Unfortunately you compromise a little bit on ride." 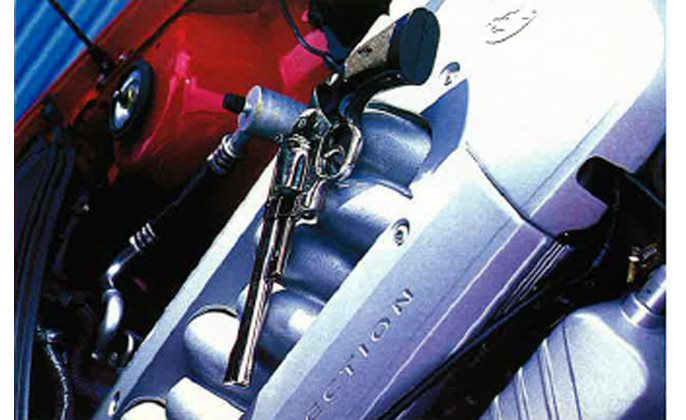 Under the bonnet lngall went for driveability over grunt and quarter mile times were not much better than the stocker. Not wanting to mess with ADRs, engine work was restricted to a fiddle with the management chip to improve throttle response ("calmed a bit in the VT compared to the VS") but a new exhaust system resulted in big improvements.

"The stock exhaust is really strangled," lngall said. "Initially I put a set of headers on first - a lot get trapped into this- and it didn't make a scrap of difference. "But as soon as I put on HM Header's full VT system there was a big change, mainly at the top of the rev range.

"Standard, the engine runs out of puff around 4000rpm, but mine will rev right through to 6500 pretty comfortably and get a damn sight better fuel economy. It makes 13kW more at the rear wheels." 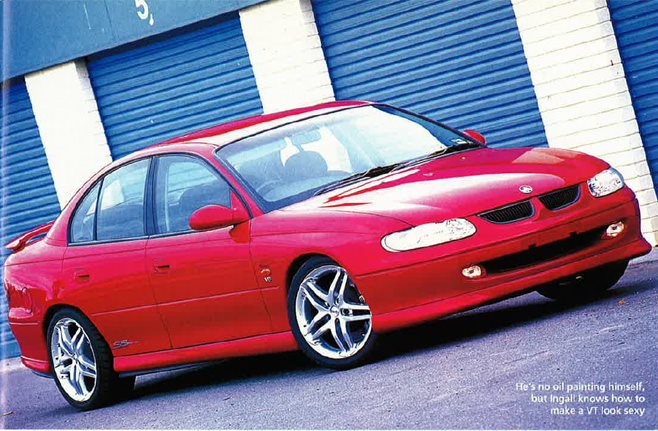 Ingall's point? Although power is nice, there are few places it can be exploited safely and legally. Better, he reckons, to have a car which stops and handles.

"Most people don't need a lot more power, but you can use braking and handling and I've arrowed in on these aspects." It's hard to separate lngall the racer from lngall the road user, but he applied the same principles he uses at the track to his Enforcer VT and came up with an ideal car.

"Because Holden has done such a good job styling the VT SS, with the right wheels, good suspension, better brakes and a bit more grunt, you can build a bloody good car. I did." And you don't argue with The Enforcer, do ya punk.