The ‘bug-eye’ polarised, but those who weren’t put off by the dopey gaze of the goggly headlights discovered a more mature, quieter, roomier and safer Rex

With the arrival of Fuji Heavy Industries’ heavier, more refined, and, well, slower sophomore effort, enthusiasts were quick to conclude that Subaru had gone soft, and that was if they could get past the styling.

The ‘bug-eye’ polarised, but those who weren’t put off by the dopey gaze of the goggly headlights discovered a more mature, quieter, roomier and safer Rex. A short drive was all it took to sense that comparing the new car’s body rigidity with the old one’s was like chalk and cheddar – the structure felt strong even if, thanks to the extra weight, bottom-end performance no longer did. 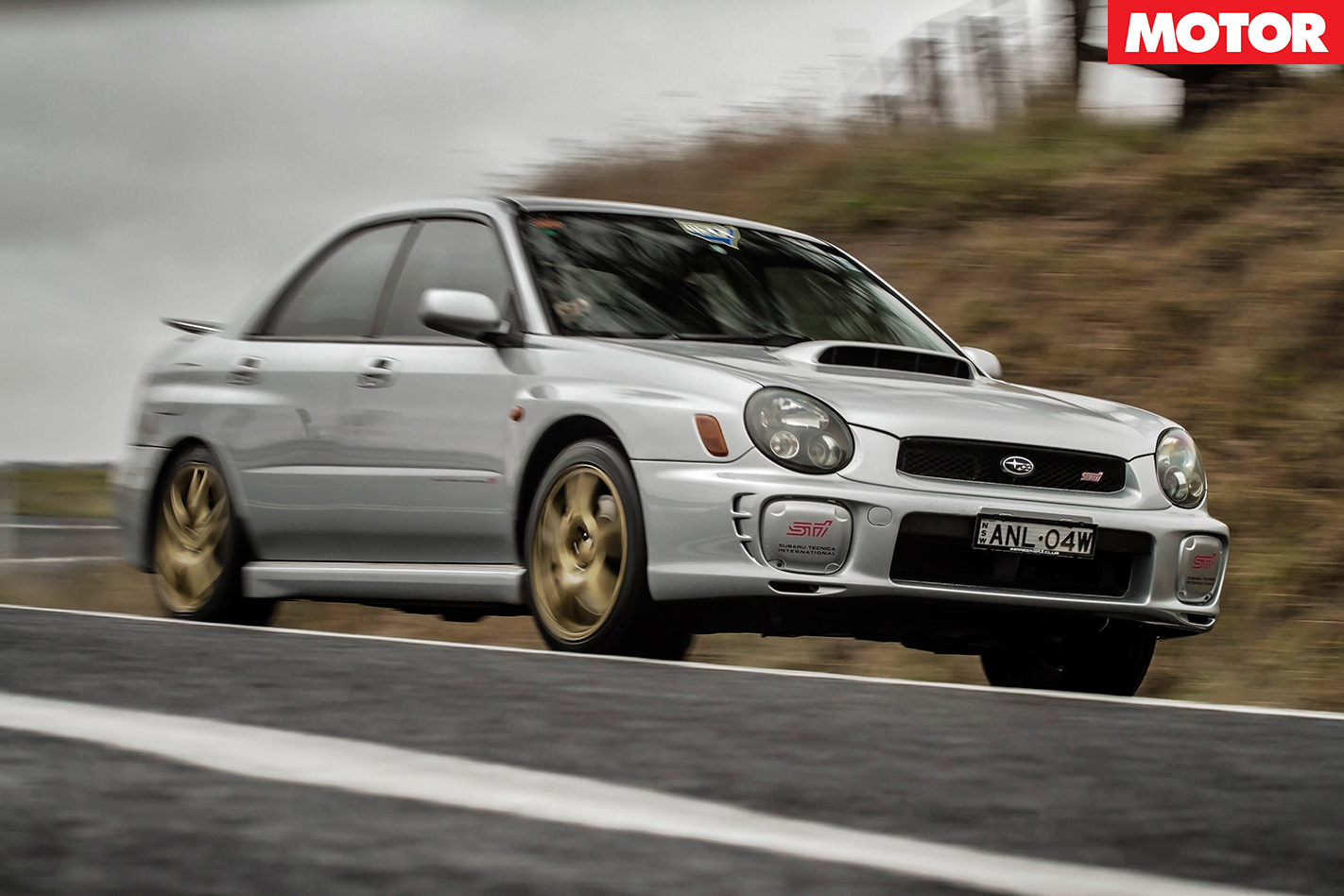 The WRX piled on around 150kg in the transition from GC to GD. Meanwhile, power remained the same as that of the outgoing MY99-00, at 160kW, and peak torque, while available 400rpm earlier, was up by a mere 2Nm.

The STi, which became a regular part of the line-up, had a crack at fixing the performance and aesthetic shortcomings, though it was slightly down on power and torque compared with the version 5 and 6, at 195kW and 343Nm, and there was only so much bolt-on body bits could do. 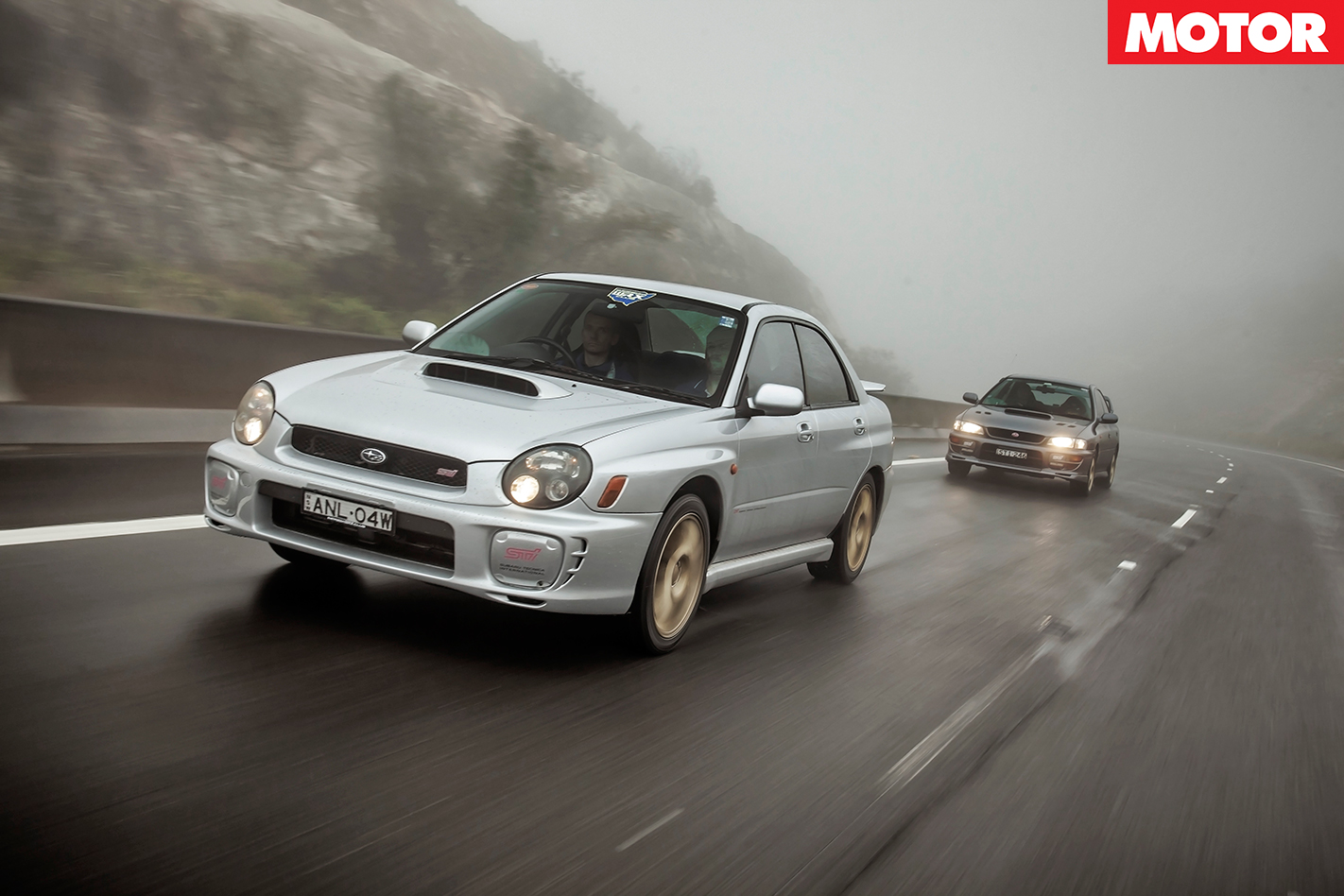 That said, Evan McNeill’s borrowed, bog-stock bug-eye STi represents the value sweet spot in our line-up – mid-teens for this tidy example complete with a six-speed and Brembos sounds like explosive bang-for-buck to us.

Low-end shove certainly isn’t a bug-eye STi strength, but once in the go-zone, the closely stacked six-speed ’box helps keep it there. Up top, the boxer beat is muffled, but the engine feels potent, if less than rev-happy. Easy mods to the intake and exhaust, together with a tune and a bit more boost, would tap the potential of the existing turbo and intercooler, which is precisely how the plan goes for this soon-to-be-track car, together with some modifications to the suspension. 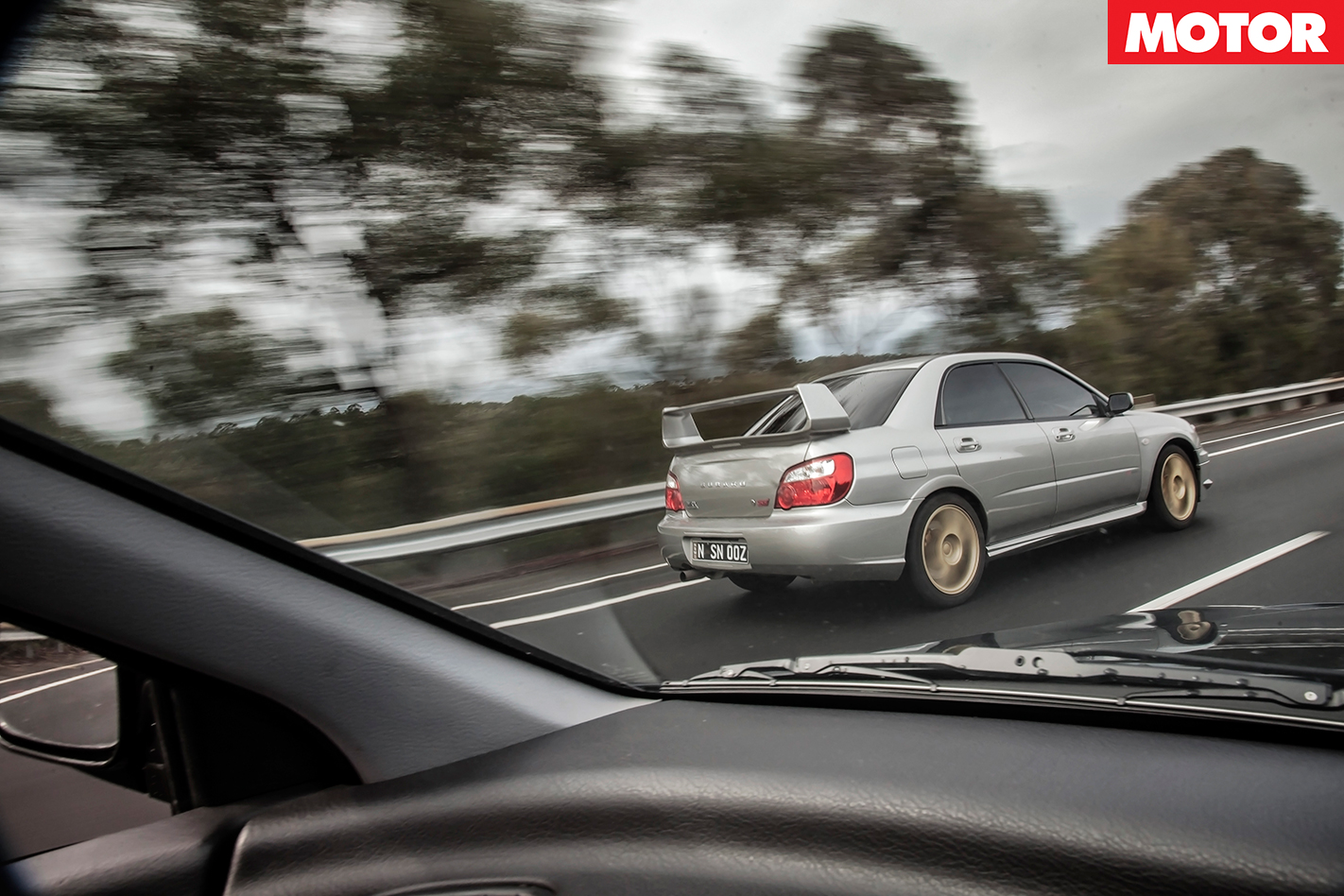 As it is, there’s far less of the noise, vibration and harshness that came standard in earlier STis, though the ride is busier than in a base-spec bug, and the major controls react, rather than merely responding to driver inputs.

For many, though, the Rex returned to form – and good looks – with the MY03 facelift, which delivered the more popular ‘peanut eye’ frontal styling, and engine upgrades – including variable inlet-camshaft timing – that brought back its trademark punch. 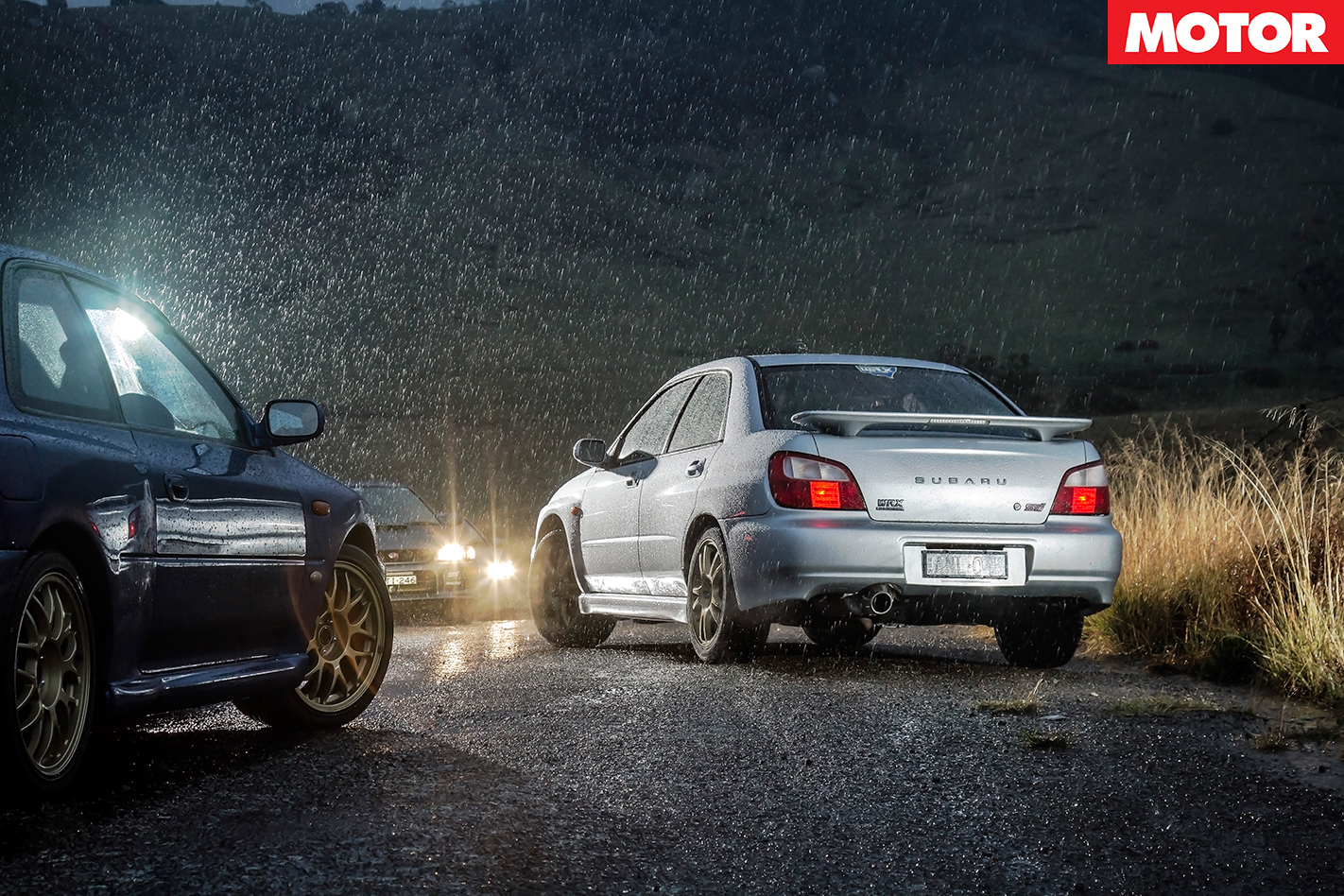 It was this series that tempted club member Craig from his first Subaru, and dream car, a Liberty RS Turbo. Six Subies in, he still craves peanuts.

“Subaru started for me back in the days of Colin McRae in the World Rally Championship, watching him drive the Legacy RS, growing up in high school,
I always wanted one,” says Craig. 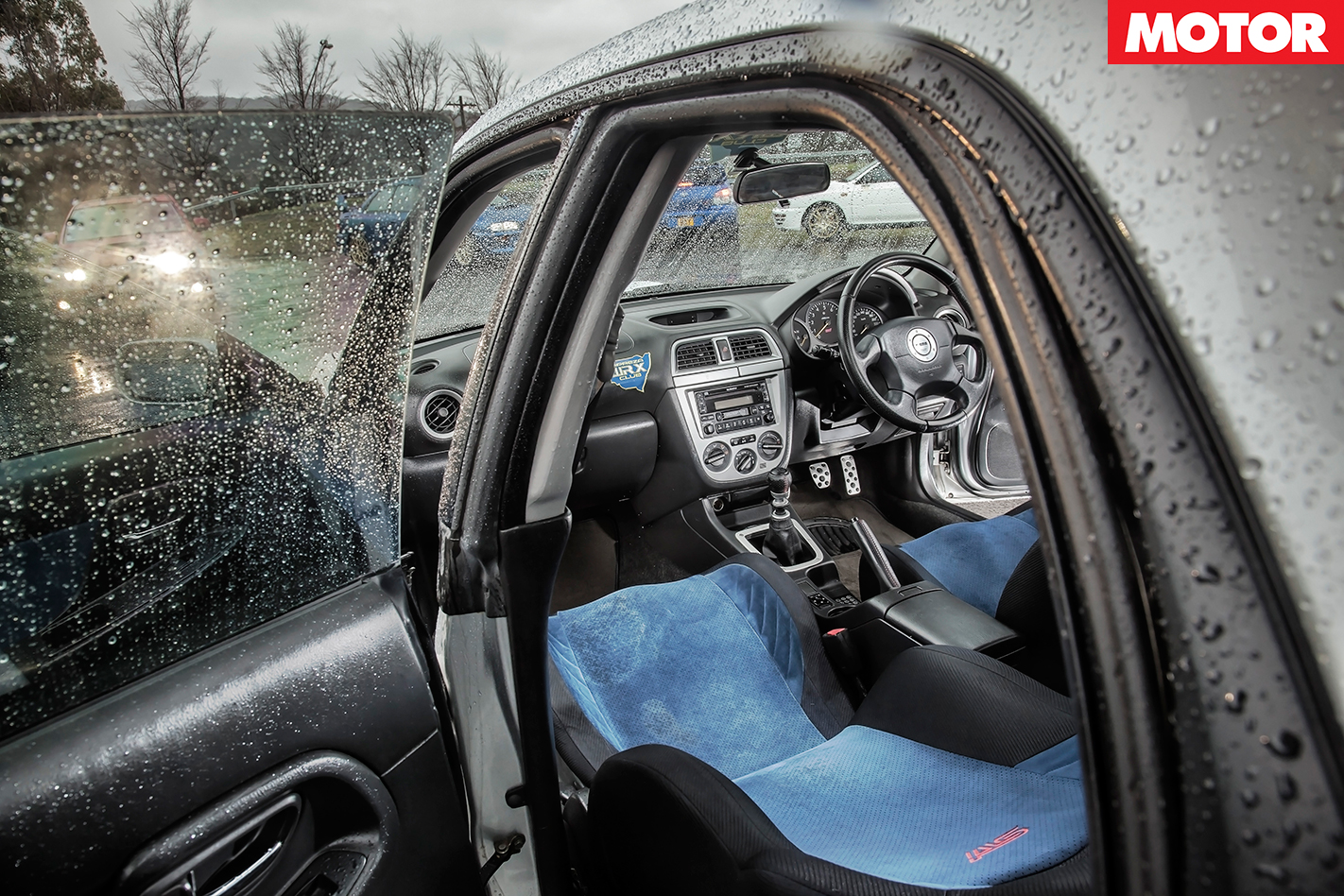 After working his way up with a succession of brand-spanking Subarus, which included MY04 and MY05 hatches, a Forester GT, and a MY11 WRX, he went in search of a track car.

“Of all the cars you can choose to drive on track, on paper the 2005 STi is probably the most reliable in terms of the fact that it’s the last of the forged 2.0-litre engines, and the first of the DCCD (driver controlled centre differential) models,” he explains. “And, not only that, also with the MY05 came the wider hubs and bigger wheel bearings.” 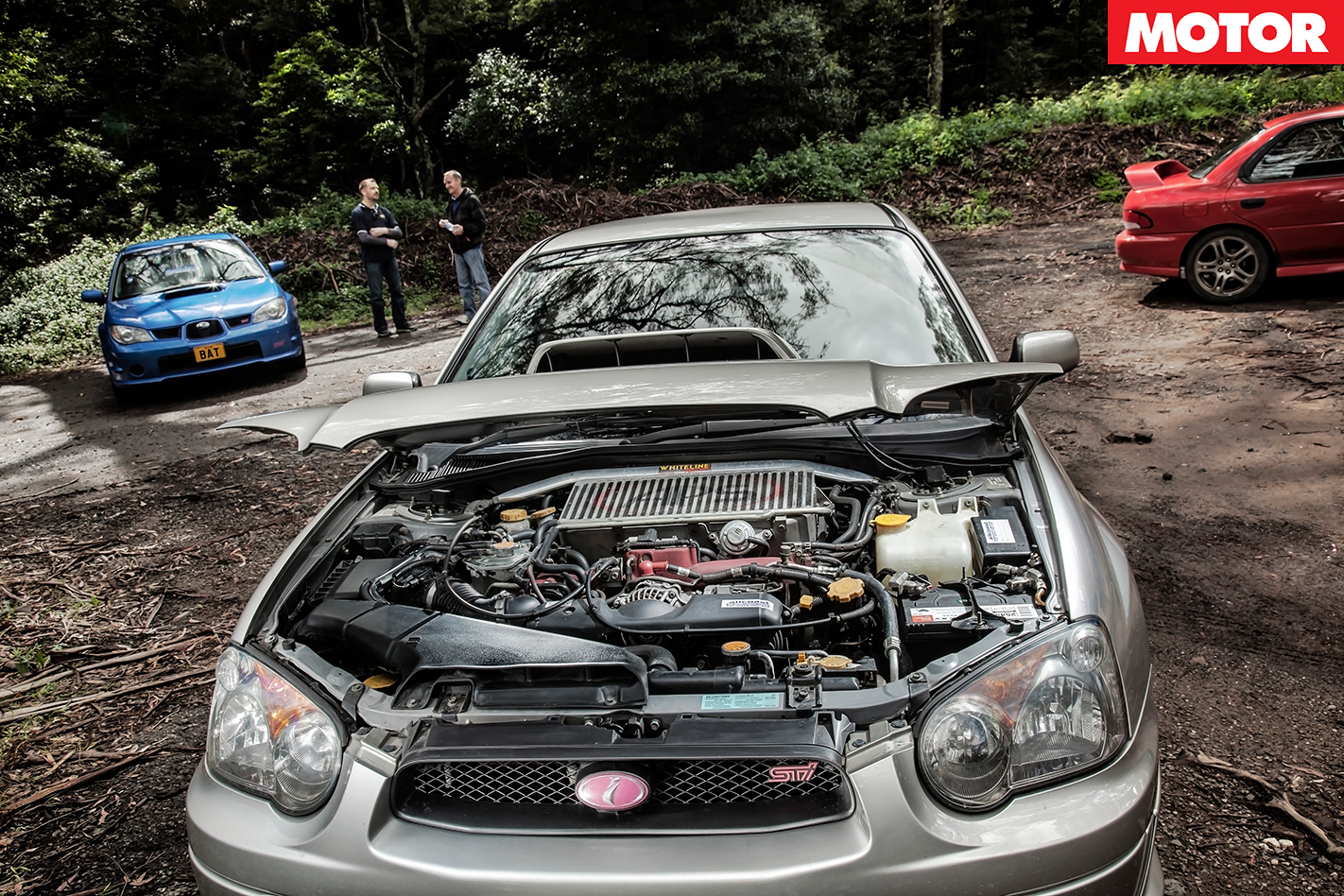 Craig bought his STi as a 60,000km, one-owner car with all the mods already done, which include an exhaust, a larger top-mount intercooler, a flash ECU tune, uprated anti-roll bars, upgraded brake rotors and pads, and coil-overs. Just 18 months on, it’s got 92,000km on the clock and from a quick drive I know exactly why he’s racked up the kays so quickly.

More than any Impreza here, its steering feels intimately connected and precise –
a genuine highlight – and its front-end feels unshakably planted. There’s an initial delay while the 2.0-litre turbo engine winds up, but when boost hits it’s like a lit firecracker all the way to the shift light. The middle pedal is responsive and powerful, and the electronically-adjustable coil-overs offer a decent ride/handling compromise on the mid-range setting dialled up for the road. 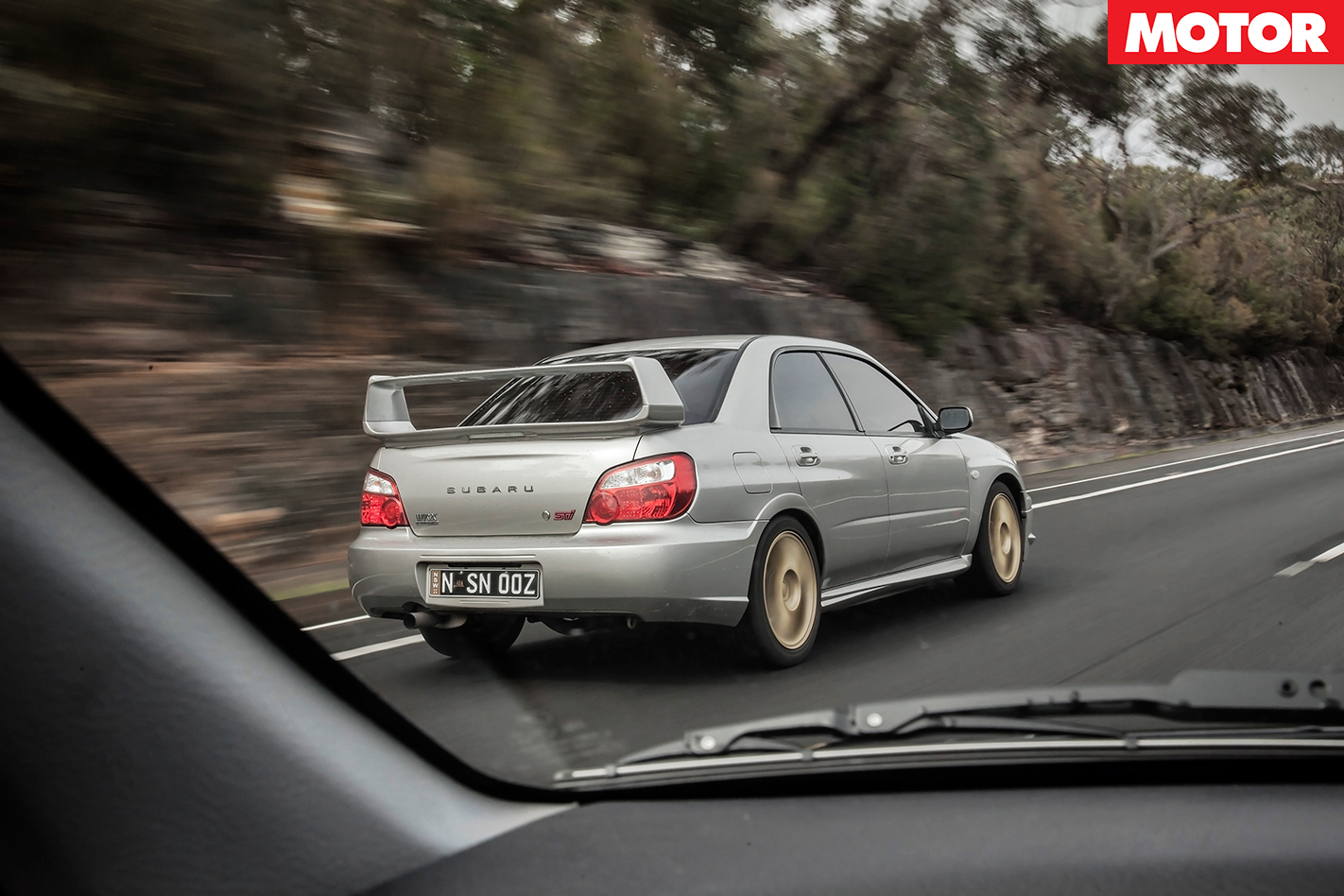 As was the plan, Craig’s spent plenty of time lapping the Sydney Motorsport Park circuit at Eastern Creek, where he holds the club lap record for the model, at 1:49sec. He’s also clocked 1:08s at Wakefield Park.

A facelift on, first impressions of the MY06 are that, with its 2.5-litre engine, it brings back classic WRX bottom-end punch. And, in Ian’s lightly tweaked STi, the top end continues to drive the big-block point home. 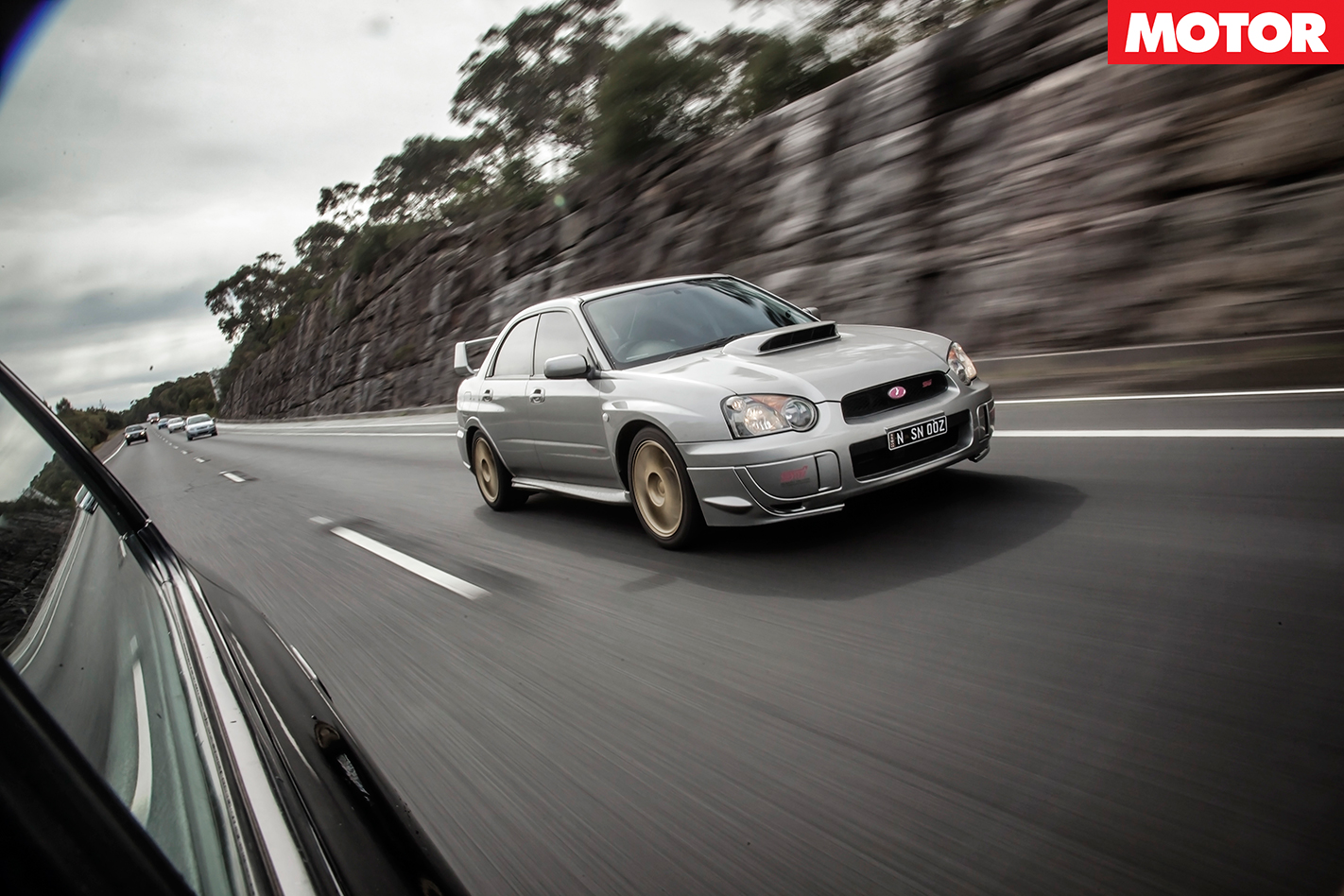 When it first appeared, some criticised the 2.5-litre for trading the 2.0’s high-rev kick for flexibility. Sure, there’s less of a ‘power band’ than in early cars, but the thick, broad spread of torque makes the last of the second-gens effortlessly quick and difficult to fault for day-to-day duties. And, while Craig cites the later STi’s lack of forged pistons as a valid durability drawback for a car that’s going to hit the circuit, on the road it’s unlikely to be much of an issue to most owners.

Just as in the MY05, the way the chassis moves through corners is far more fluid than in earlier STis, though the ride in Ian’s newly acquired car is a fraction fidgety on 100,000km-old dampers and upgraded STi springs. 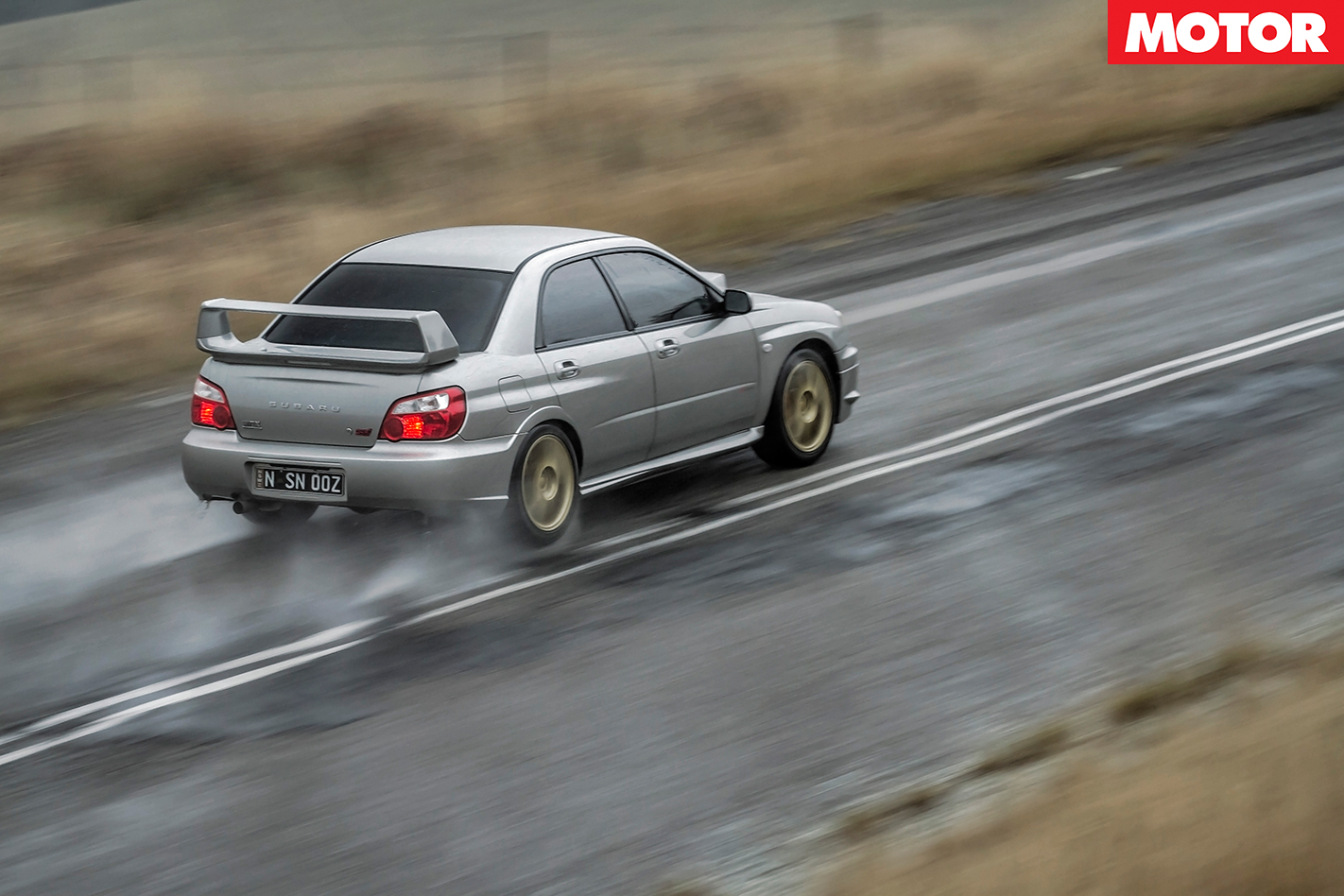 The engine, with modifications limited to a cold-air intake and a turbo-back exhaust, delivered a 202.8kW at the wheels at a club dyno run the day before. That’s hugely impressive when you think back to Jim’s heavily modified 2.2-litre MY94, which has about the same peak power, but not near the all-rev oomph.

Of his Subaru beginnings, Ian says that he “always admired the brand, but I was a V8 man before this and I’d always had V8 Holdens. I stepped out of a VN Group A into a small four-pot Corolla SX, and then an opportunity came up to get into the MY00 and I thought, ‘well, I’ll give it a try’. I had that for three years and then stepped into the MY04.” 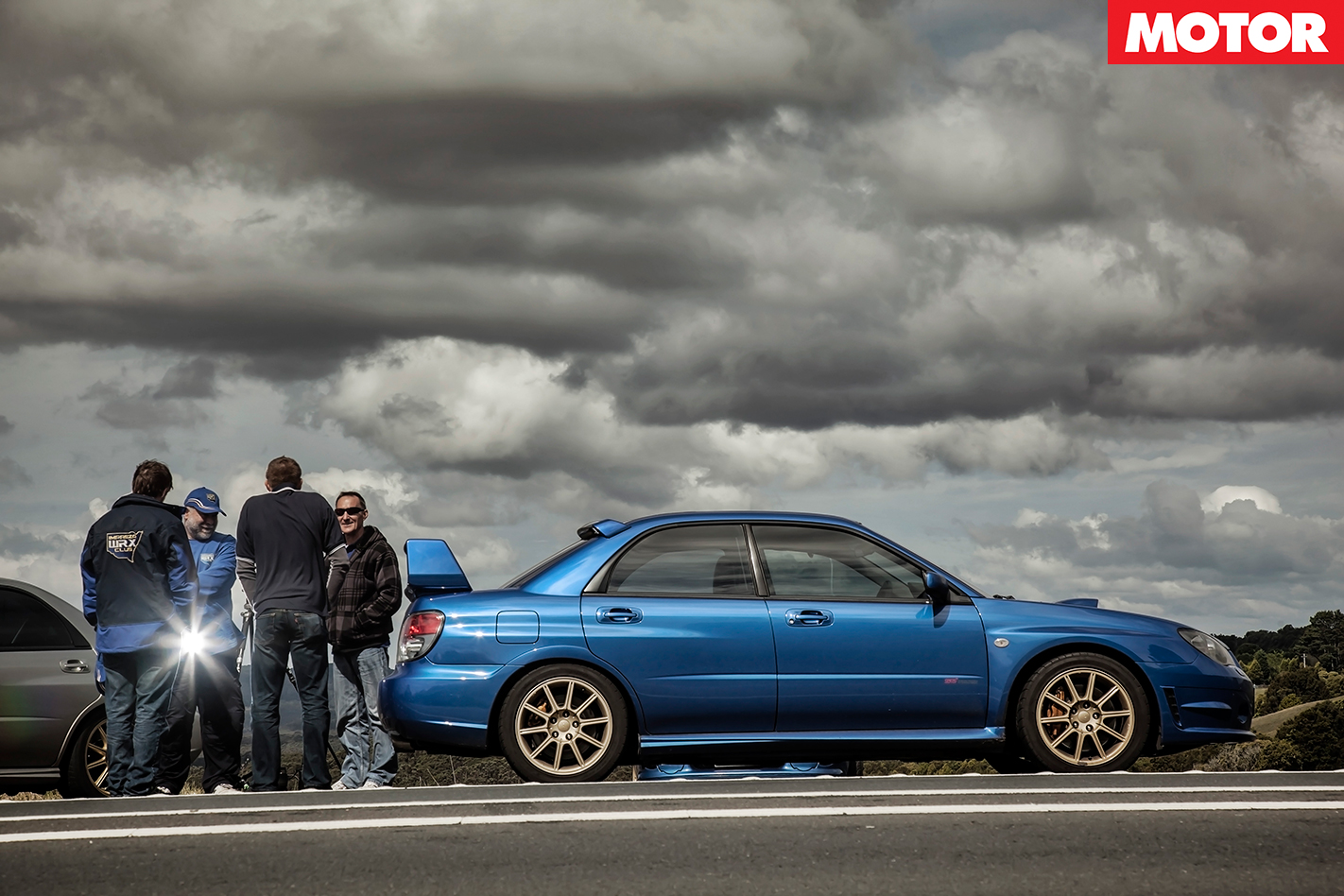 Ian’s wife still owns the 235,000km, 178kW-at-the-wheels modified MY04 – “never had to crack the engine; never had to touch the gearbox” – and you get the impression their garage will forever have a pair of Subies in it.

But what was it they called the MY06-07? Owner Ian says ‘hawkeye’ is his preferred shorthand, but less favoured nicknames include ‘koala nose’ and ‘pig nose,’ which probably isn’t quite what Subaru had in mind when, in a nod to its aviation beginnings, it penned the wings ’n’ propeller grille for the second-gen send-off. 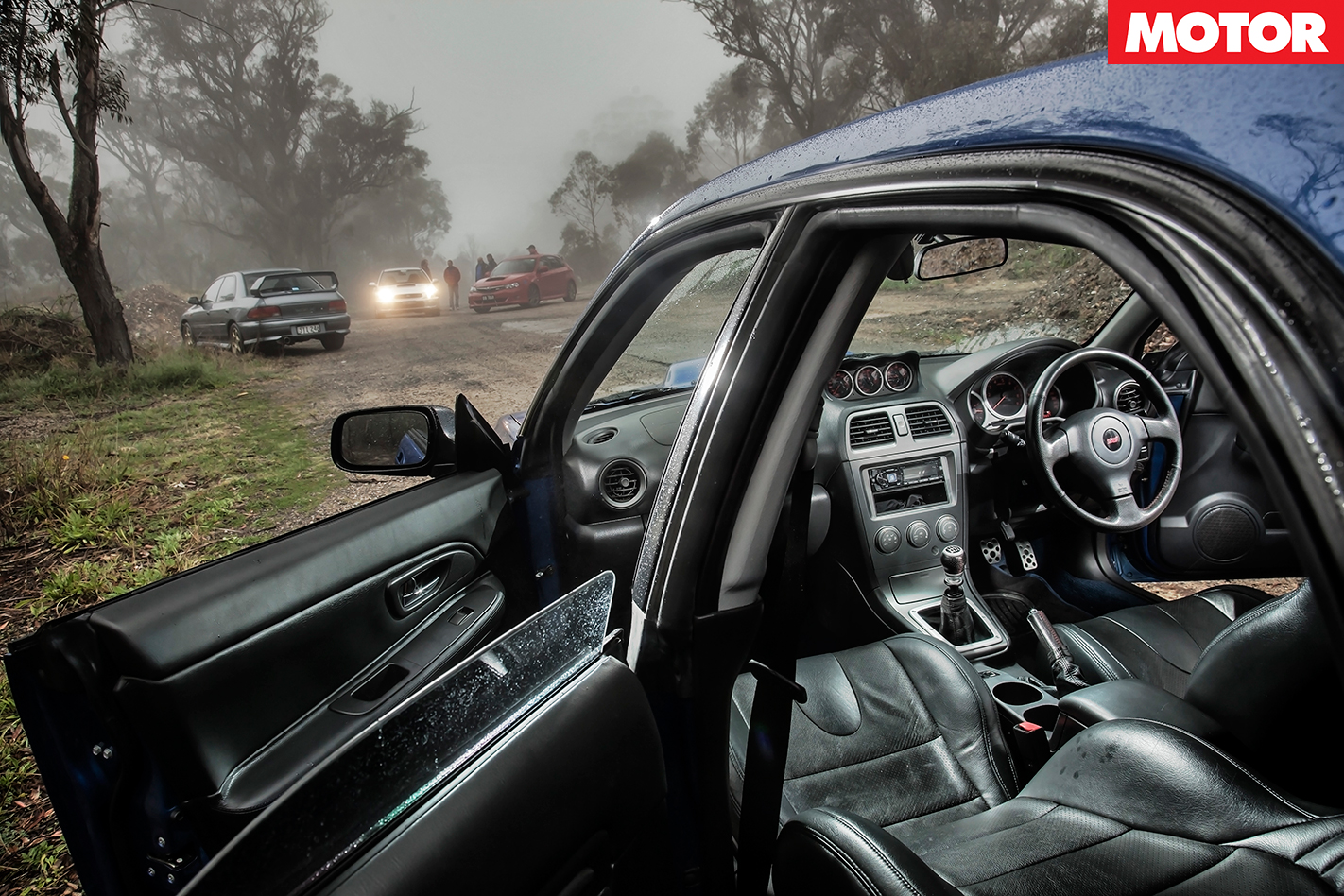