FIAT’S take on the 2015 Mazda MX-5 has finally been caught testing on the open road, several months out from its anticipated global debut at November’s LA Auto Show. 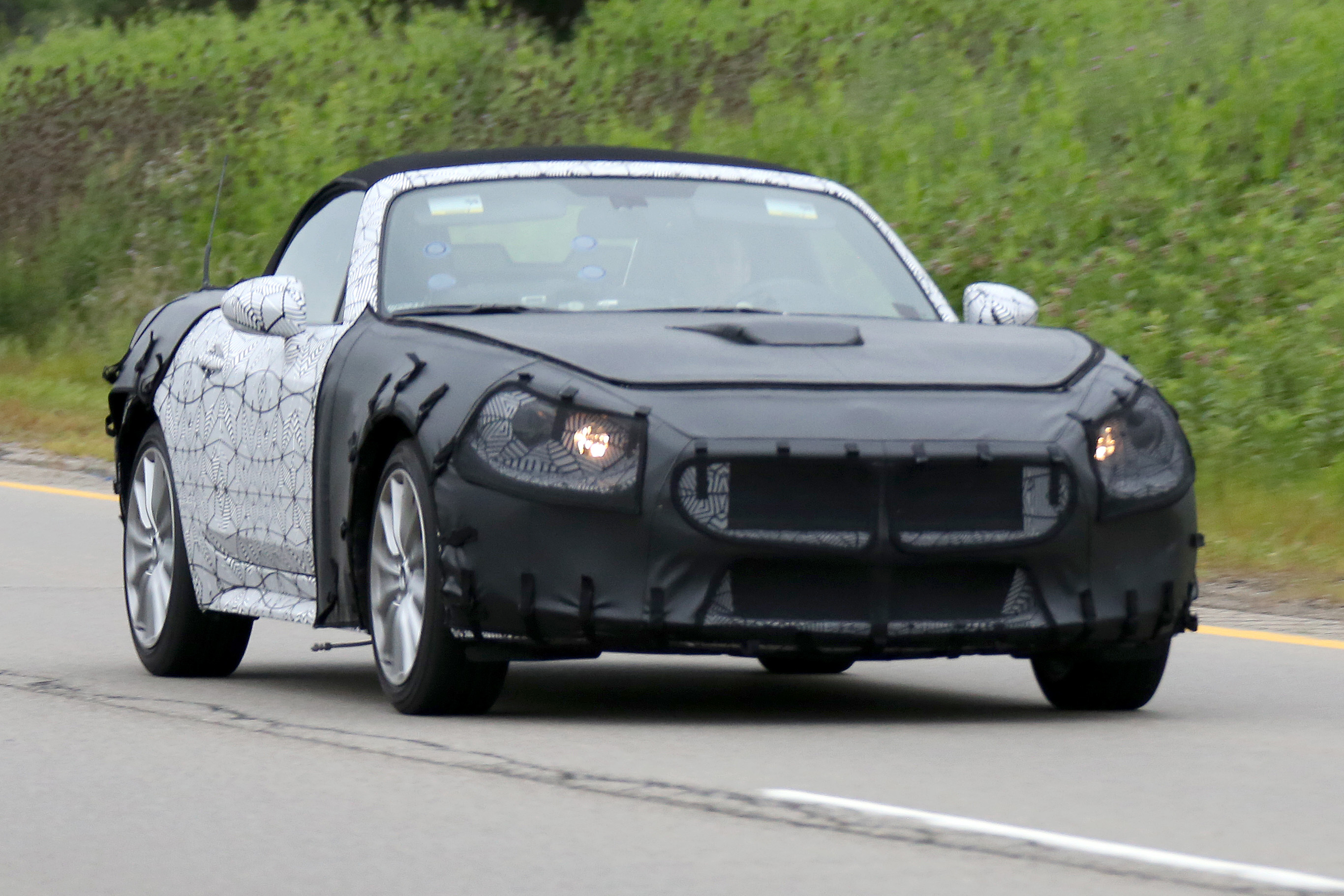 While the identity of the 2016 Fait 124 Spider remains a secret beneath all that camo, keener eyes may ascertain what appears to be a longer and blunter nose cone and tail treatment than the Mazda’s, suggesting that a different drivetrain is set for the Fiat – perhaps the 1.4-litre four-pot turbo MultiAir? The positioning of the exhaust pipes at each corner also tell a different story to the MX-5.

Of course, the notion of the super-lightweight 0.9L turbo TwinAir rattling about up front would be enough to make even MX-5 aficionados swoon with anticipation, but that’s probably not going to happen in this resolutely rear-drive architecture. 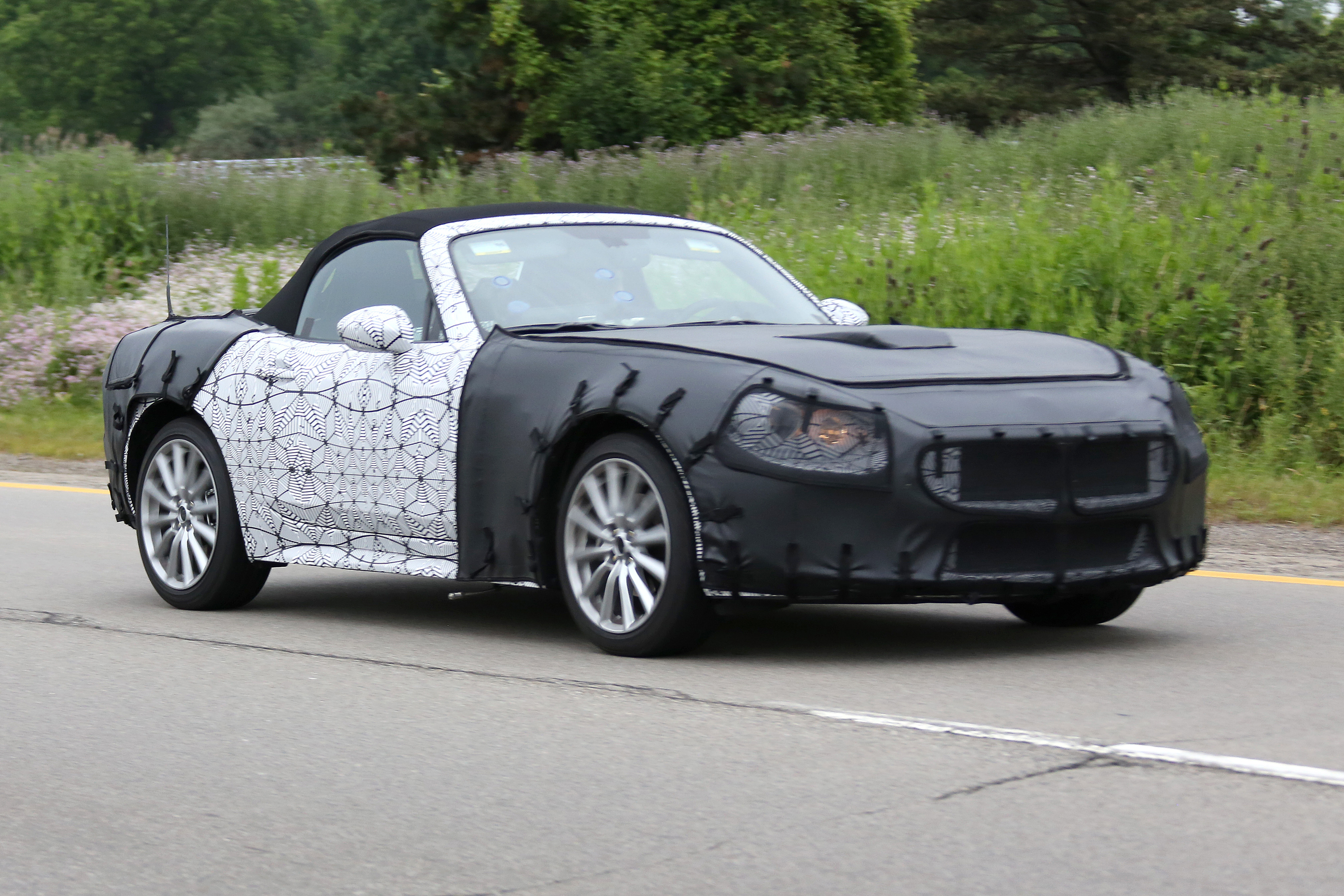 Back to the spy shots, check how the 124 Spider’s headlights appear larger, while the central stop light is at the trailing edge of the boot lid against the Mazda’s equivalent at the opposite end. Only the doors, fabric roof, and windscreen seem to be shared between the Japanese and Italian.

One Mazda executive revealed to us last year that Fiat was given the dimensional hard points fairly early on in the MX-5’s gestation, but carried out the styling changes in Turin for maximum differentiation. 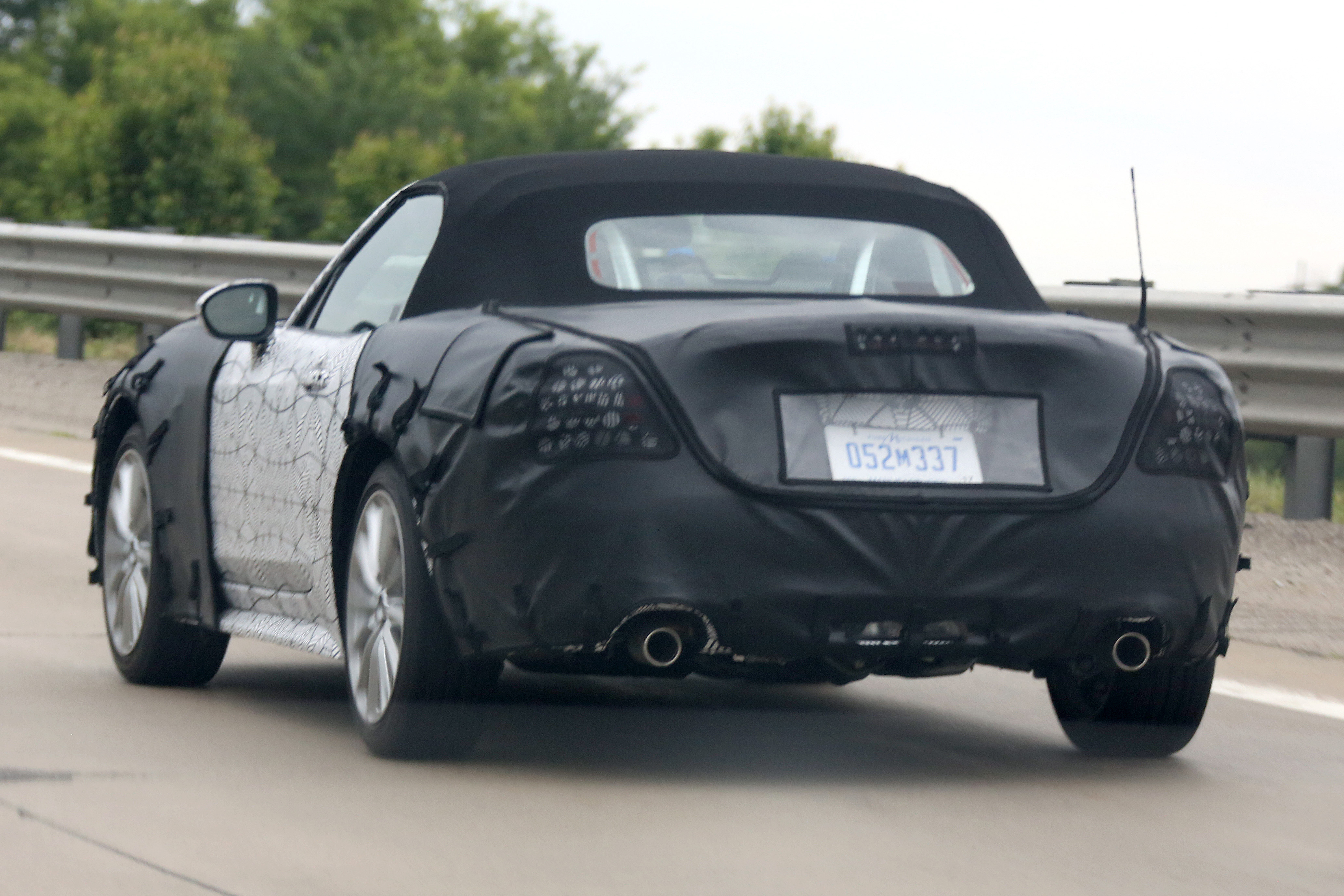 Both cars will be built in Hiroshima, and share the same wheelbase, electric rack and pinion steering, double wishbone front and multi-link rear ends. However it seems likely that the 124 Spider will gain a specific set of helm and suspension tunes in line with the marque’s heritage.

Speaking of which, some reports say that Fiat has infused a surprisingly high level of retro elements in its two-seater roadster’s face and tail. If true, how successful they meld with the MX-5’s very distinct profile remains to be seen. 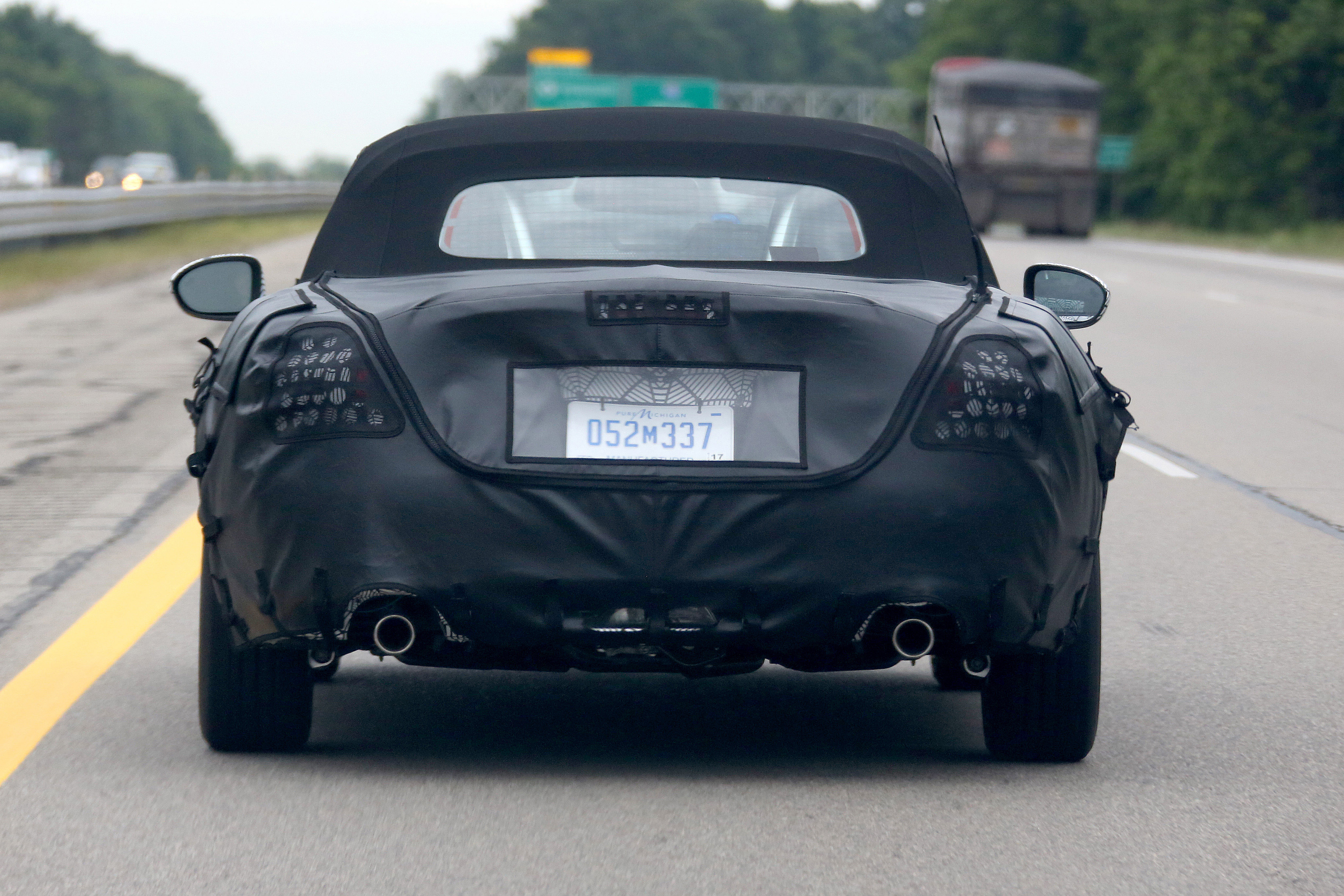 Upmarket 124 Spiders will probably be pitched as an alternative to the new Audi TT Roadster, Mercedes-Benz SLK, and ageing BMW Z4, while if Toyota ever gets its act together with an 86 convertible (and Subaru BRZ droptop) then that, too, will be in the Italian’s crosshairs. 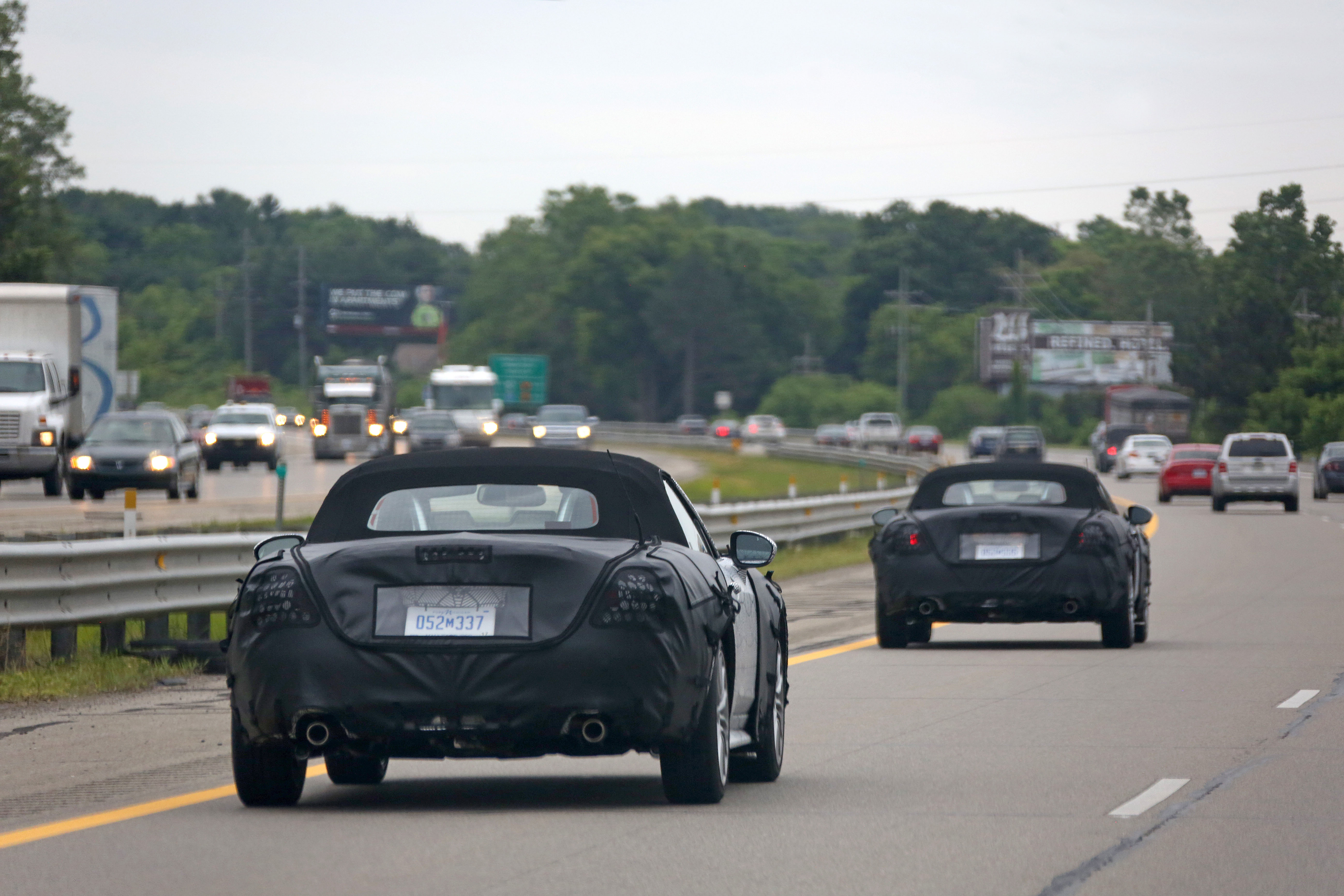