Chevrolet's just revealed 318 reasons to move over if a Camaro ZL1 fills your rear view mirror.

The figure is an average of runs made in both directions on the 12.3km oval, where the ZL1 hit 311km/h one way and 325km/h the other. The ring itself is made up of two 4km straights and turns with 49.7-degree banking. 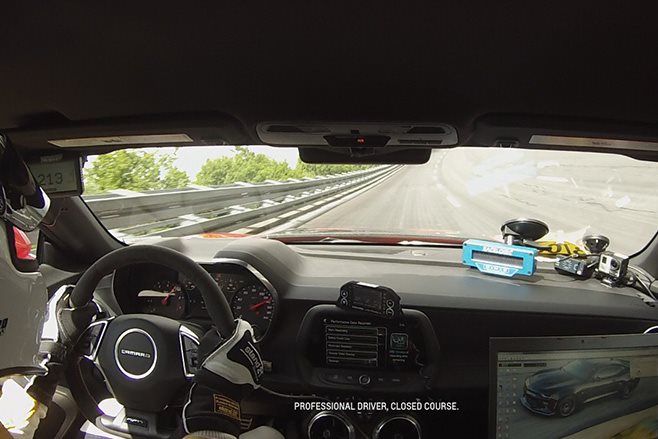 The car’s 10-speed automatic transmission (yes, the one that's coming here with the 2018 Mustang) proved crucial to the performance  which spreads the car’s 485kW and 881Nm over its ten ratios.

For the run its Goodyear Eagle F1 Supercar 3 tyres were set to the recommended 44psi for high speed and Chevrolet claims the only other changes made to the car were for ‘mandatory safety equipment’.

However, the Chevrolet was able to hit average speeds of over 322km/h once Al Oppenhesier, Chevrolet’s chief test engineer, and his team zeroed the camber profiles and inflated the Goodyears to maximum pressure.

If you think the manual ZL1 could come close to such a time, John Hennessey of Hennessey Performance tested a manual-equipped ZL1 and saw it hit 278km/h in fifth-gear, which he believes was the car's top speed. Some 40km/h slower than GM's own test with the automatic.

Take the comparisons outside its family, the ZL1 thrashes the Ford Mustang GT350R’s 271km/h rating. And would blow past exotics like a Ferrari California T (315km/h).

While you won’t see a curren generation Camaro in your rear view in Australia anytime soon, should you be stateside, you know what to do.