OCTOBER MARKED two years since Honda’s current Civic Type R launched in Australia. We’ve fawned over it since it arrived in 2017, giving it a Performance Car of the Year award and witnessing it nab two consecutive Bang For Your Bucks gongs.

But while we’re more than familiar with how it compares with its competition on road, we thought we’d investigate how sales are tracking at the two-year mark.

VFACTS sales data revealed 274 units have sold to the end of this year’s third quarter, which leaves a big gap to the 475 it sold for the full year last year on the back of a strong award season. Despite the decline, the figure compares well against its main rival.

Renault sold only 279 RS Meganes in the same period this year. While that narrowly beats the Type R, it is significantly less than what it did in 2015 during the previous generation’s last year on sale here. And that’s with a range that includes availability of both manual and automatic transmissions, along with two chassis options. Maybe Renault’s imminent RS Megane Trophy will change that.

Perhaps simplicity is what Australians prefer from their hot hatches. Hyundai this year sold 692 hatch-based i30 Ns, despite the car still awaiting an automatic option from Seoul. Even the Fastback N has outsold both the Megane RS and Civic Type R during its first year on sale since February, with a total of 283 units finding homes.

And clearly a pricier tag doesn’t deter Aussies if the juice is worth the squeeze. The simplified Mk 7.5 Volkswagen Golf GTI dominates sales even into its twilight years, with 1118 sold to the end of the third quarter. 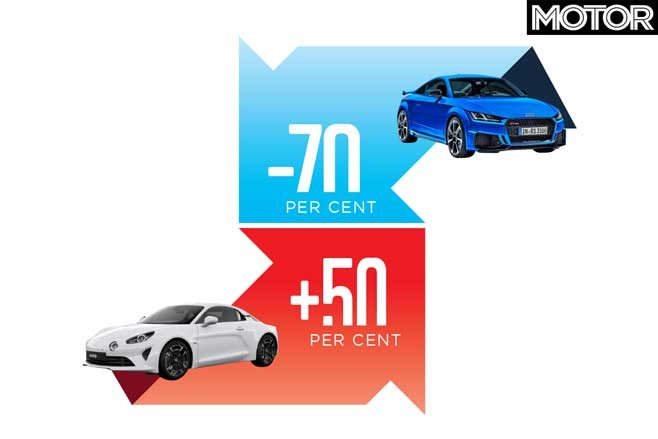 Too Cool - Audi TT
While both the 4C and Alpine A110 enjoy year-on-year increases in the world of small two-door coupes, Audi’s TT struggles. The 50 sold this year is 70 per cent fewer than in 2018. A model update earlier this year should help close the gap somewhat as the year comes to a close.